He was an early enemy of the Star-Spangled Kid (Courtney Whitmore), who would eventually become Stargirl.

Many characters from this book were never seen again. Which is odd, since their creator Geoff Johns went on to become a major writer then higher-up for DC Comics.

Paintball seems made of some sort of living, dense, viscous paint.

This “paint” does not seem fully material. It is charged with energy, and evaporates within minutes.

He can project splashes of “paint” from his body. Certain effects seem loosely associated with certain colours. Observed effects are: 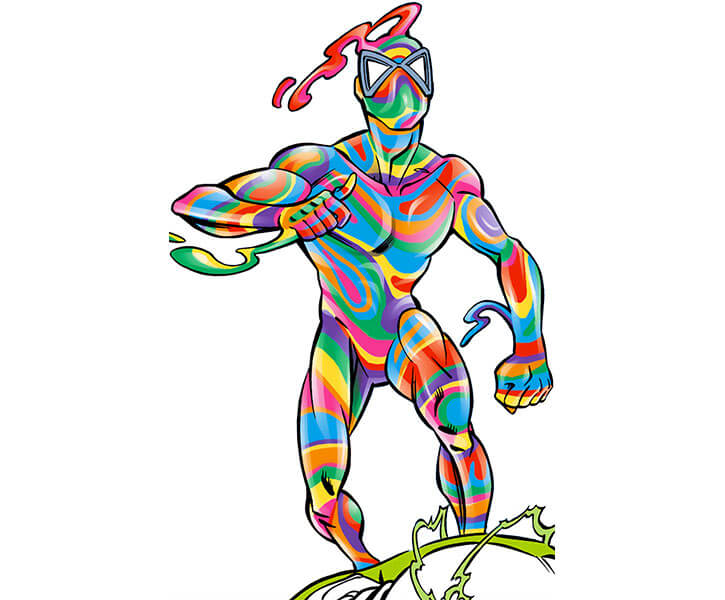 Paul Deisinger was a disgruntled arts teacher. He worked at the Blue Valley high school, in Nebraska.

Like many school officials, he was actually an undercover agent of the Dragon King. This WWII-era Axis mastermind had a secret base in the area. Deisinger reported to Principal Sherman, a Dragon King agent who was secretly a robot.

Paintball was a mercenary, rather than being hypnotised or indoctrinated.

He also mentioned that the Dragon King “enhanced his talent”. It therefore seems likely that he already had superhuman powers that were augmented, rather than created outright, by the Dragon King’s scientists.

We don’t need no education

Paintball occasionally helped with the numerous kidnappings going on at the school. These turned dozens of kids into hypnotised minions of the Dragon King.

In 1999, Paintball assaulted four teenagers in detention. But one of them turned out to be the Star-Spangled Kid (Courtney Whitmore), who was soon joined by S.T.R.I.P.E. (Pat Dugan).

Paintball was defeated when a mirror in a school locker reflected his laser-like paint blast at him.

Pat Dugan took Paintball’s goggles with him as a souvenir. Thus, months later Paintball reconstituted himself around the goggles in Dugan’s hideout.

He fought with Dugan and Impulse (Bart Allen), but Pat defeated him by splashing him with paint thinner. Paintball was dissolved and went down the drain. 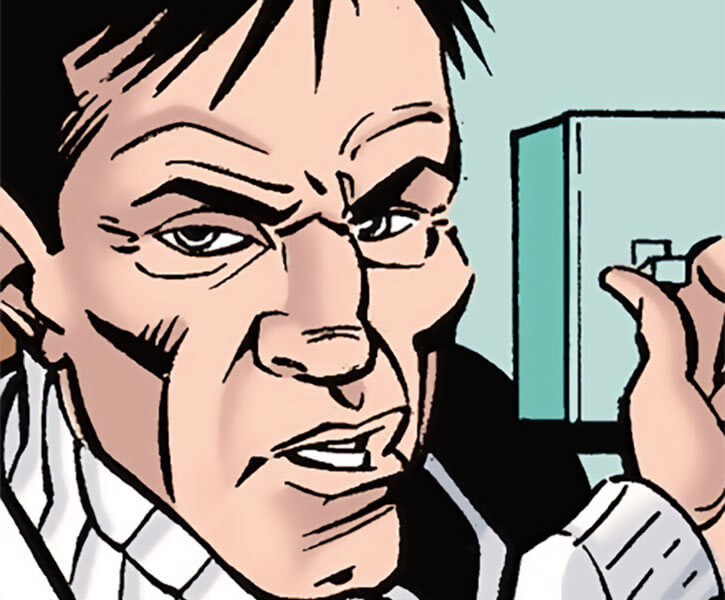 Deisinger is passionate about art, particularly painting. His speech contains numerous references to such.

However he cannot stand teenagers, making him bitter and frustrated about his job. Whether teaching is his actual job or was just a cover for this posting is unrevealed.

He will be ruthless against teenaged heroes, but he’s not actually homicidal.

Paintball seems to “eat” colour and energy to sustain himself. While he prefers to drain the energy of annoying kids with too much of it, he also has been seen snacking on a box of crayons, turning them all white.

“Girls ! I said no talking ! This is art class, not communications. Do ya hear me, ya brats ? I can ruin your day quite easily.”

“You can’t trap an artist’s vision !”

“My [yellow] blast will tear you kids apart. Pigment by pigment.”

“You kids. Always jumping right into things.” (Deflects the charging Star-Spangled Kid into a wall)

“Now let me show you the true meaning of the term still life.”

MID of kid heroes, Secret ID, Fatal Vulnerability (being splashed by turpentine, paint thinner and the like).

All the Close applications of the Array can benefit from his Elongation, as normal.