D&D using the MEGS rules was recently discussed. Here is a MEGS player character that I recently found cluttered on a worn, old Palladium RPG character sheet. I used him in our Palladium-DC campaign in a world and setting identical to that of the Palladium Fantasy RPG, but using MEGS rules.

Crime-, Apocalypse- and Magic-DC were the overwhelmingly most popular ones and therefore have rich campaign worlds with numerous adventures and characters that will one day be shared through this mailing list.

His mirth is contagious and boosts the morale of those fighting with him.

While not yet a true veteran he has access to an assortment of useful skills including first aid, riding, climbing, stealth techniques. But he’s chiefly about weapons.

Comar seems to have belonged to a class of lower nobility in the Western Kingdom. He had aspirations for knighthood.

He was a Captain in King Harald’s Honor Guard and well-known for his combat prowess with melee weapons and inspiring leadership if little else.

The otherwise little experienced Comar was then put in charge of a hastily put together rescue expedition to save King Harald’s kidnapped young daughter. The King had just received a ransom note.

The party followed tracks in a rainstorm to a cave hideout. They took down hordes of measly warriors. Then the final guardian, a powerful Minotaur renowned for splitting his opponents using a double-axe, was encountered.

The Minotaur cut down most of the remaining rescue team in bloody combat. But Captain Comar gave him a taste of his own medicine, cleaving through him. The king’s young daughter was returned safely and Comar’s fame spread greatly.

As a reward for services well rendered Comar was promoted to Major. He was then personally knighted by the King and granted the title of sir.

Comar also received a small castle at the outskirts of the King’s Empire, his grand home to this day.

While having no regular income, other than what is granted by his friend the King, he keeps regular feasts at the castle. Good food, beer and wine is abundant. Comar stands ready for new orders and adventures at the whim of the King!

Comar also wears a red cape and is often seen carrying his broadsword on his back while riding his horse.

Major Comar has a loud personality. He believes in honor and glory and the good fight. Fight hard against the forces of evil and celebrate hard could be his adage.

He is particularly fond of the concept of a good fight and the rule of the strong, and will guide his forces quite effectively in putting down magical menaces, monsters, evil men and other threats.

Comar enjoys directly serving the king and believes in doing as good as possible a job at it. The Western Empire should be renowned for its fine combatants, its wealth and capable leadership, and Comar will see it happen.

Comar owns his own castle, which one day will rival that of his master, King Harald, whom he will one day amenably leave, not betray. His court is growing every day, but Comar often goes on adventures to become the man that he can be, the legend that he is, and the myths that will be told about him.

Drawbacks:
None. Glorious ain’t it?

The characters were made for only 225 Hero Points (the Player characters  start basically as normal human folks). So surviving mythic adventures and fighting legendary monsters and creatures was really hard but fun!

The Player characters were any one of a chosen class with a prioritized Subskill consisting of: Wizard (One Occultist subskill or one Power), Thief (one Thief subskill), Knight (One Weaponry subskill), Ranger (One Military Science subskill), Acrobat & Tumbler (One Acrobatics subskill) or Assassin (one Martial Artist subskill).

The prioritized Subskill would often also be the Player characters highest Subskill.

A complete Skill could be raised with all subskills included by paying a Cost equal to the averaged AP-level of all the subskills. This genre actually takes 15 HPs for possessing Mystical Attributes, leaving the characters with even less HPs at creation!

The Ranks used in the King’s army are in ascending order: Private, Corporal, Sergeant, Lieutenant, Captain, Major, Colonel and General. While the campaign did not automatically involve membership in the King’s Guard it was recommended as it offers many good starting points for the adventures.

Source of Character: Homemade for our Palladium-DC campaign. 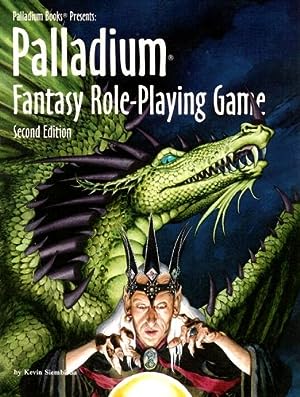