So this sort tends to have writeups.org profiles, even if that means tiny articles where the stats are mostly guesses.

Pallas is huge, with a massive (perhaps superhuman) physique. His strength seems to be in the “Class 25” range, with matching durability.

He carries an enormous weapon called the omni-gun. Pallas will usually use it as a combination mace/quarterstaff, but it can also emit a powerful energy ray.

Pallas seems markedly more powerful than the rest of the Graveyard Faction, though Monster Baby’s upper limits are unrevealed.

The Graveyard Faction was hired by a Coral City patron. They were to raid the headquarters of the Movement, a grassroots organisation in a broken neighbourhood. They were given a jammer to approach unseen. Their orders were to kill a few people then leave.

Prior to the invasion they took down and hospitalised Movement member Mouse. However, the attack was derailed by Movement member Vengeance Moth, who also destroyed their jammer. Then they ran into Burden. This allowed other Movement to come in.

The Graveyard Faction was forced out by Movement leader Virtue. They then told their employer that they were pulling out of the contract, as the opposition was considerably stronger than indicated.

Pallas asserted that he was the son of a god. The name presumably ties him to Ancient Greek mythology.

Though the word is mostly known as describing an aspect of the goddess Athena, it is actually the name of a Titan . He and his children were war gods, a portfolio Athena and Ares took over after the Titanomachy . Three obscure DC characters (Zelus, Bia and Kratos) are named after some of the Titan Pallas’ children.

Pallas’ appearance is a series of Jack Kirby  references. His weapon is straight from the Fourth World, and its beams are surrounded by Kirby dots . Furthermore, his costume is that of a semi-obscure Kirby character called Atlas.

This costume is also worn by a character in the possible Kingdom Come future. But his appearance is different from Pallas’. 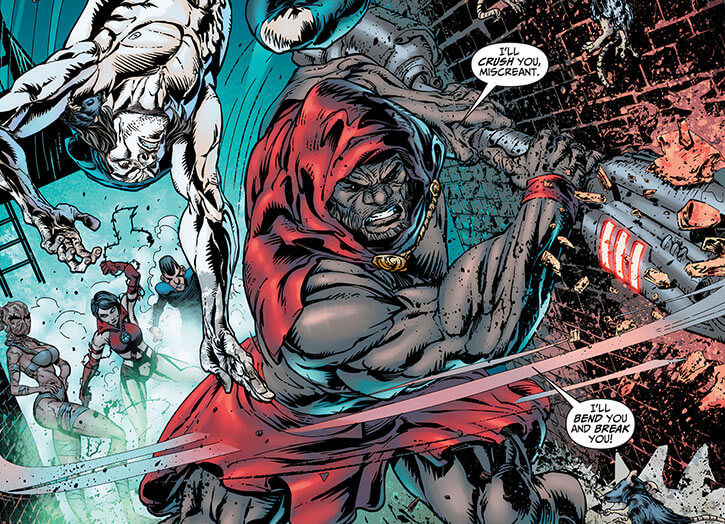 Pallas seems to have a thin beard, though it’s not consistent from panel to panel.

Pallas considers himself a hero, and tends to act like one. He doesn’t seem willing to admit that Anguish (and perhaps Arson and Monster Baby) is evil.

For instance, he was reluctant to attack Vengeance Moth, since Moth was in a wheelchair.

It seems possible that Anguish is manipulating him through peer pressure, and/or that the GF team are his only friends.

Demons, come on, you’ve got a vision

He also has a thing about demons, and was uncharacteristically aggressive when fighting Burden.

Which doesn’t necessarily means anything. He might just consider that as an alleged hero of allegedly divine descent, fighting demons should be his thing.

He tends to act in a grand and thunderous manner. But he isn’t as collected as Monster Baby (a bunch of rats getting into his unmentionables unnerved him), and he’ll reliably follow Anguish’s orders unless they seem too evil.