Nyxly has no innate powers, and little skill. He is an amateur mystic and apparently is an able enough archaeologist to find mystical weapons to use for his own gains. His hand-to-hand combat skills are average, but he’s able to intuitively grasp the workings of new mystic weaponry. From there he can use them very effectively.

Without his tools he’s a threat to no one. Said tools included included:

Both these items were deadly to Superman since they were based on magic.

Ferlin Nyxly amounted to little, and took whatever work he could get. One night when he was working in the Metropolis Music Museum he studied a newly arrived batch of ancient instruments. These were said to have been found beneath an ancient city.

He played a little using a harp that resembled the face of the Devil, wishing that he could make a musical career. But the mystical sound of the harp upset him? Thus, he sat down at a piano instead to continue his self-pitying. To his great surprise he was able to play the piano like a master. He realized that he finally could fulfill his dream of becoming a great musician.

Half a year later he was having his biggest concert in Metropolis, and was attended by major international leaders. A man in the audience, Timos Achens, was the former world’s greatest piano-player and virtuoso. But he had suddenly lost all ability to play half a year earlier.

Before the concert could begin, however, terrorists arrived there in a helicopter. They planned to bomb the entire stadium and the leaders. Clark Kent, being at the concert with Lois Lane, changed into Superman. He quickly and spectacularly stopped the attackers.

The concert began. But despite Nyxly’s excellent piano-play all the audience talked about was Superman’s amazing feat.

I have a fever, and the prescription is more harp!

While begrudging this failed concert, Nyxly again walked around in the Music Museum. While feeling hatred for Superman, he picked up the mystical harp, which he referred to as the Devil’s Harp (or Pan Harp). He played it a little and wished that he too could fly. To his surprise, he began floating in the air.

At the same time, Superman, who was tangling with the being known as the Sand Superman, lost his ability to fly over the Atlantic. Nyxly, who now understood the power of the Harp, put on a costume of the god Pan . He decided to try out his newfound ability of flight.

After a while, he decided that he could acquire great wealth using his flight ability. He attempted to rob a bank truck filled with money. He flew by the car and caught some money bags. But the surprised guards shot down the flying Nyxly.

Nyxly, falling to meet his death, played on the Harp and wanted to become invulnerable. He thus stole Superman’s invulnerability. He cratered into the ground and made a big hole, but emerged none worse for the wear.

Feeling safe in his new power, he booked time in the WGBS television studio that same day. Pan challenged Superman to fight him in the Metropolis Stadium in the evening. Kent, weakened by his meetings with the Sand Superman, could no longer fly and was no longer invulnerable. The stadium was filled with people that evening and both combatants showed up.

Nyxly began by confessing that he had done a robbery earlier that day, and that it was Superman’s duty to arrest him. Superman attacked, but Nyxly promptly stole his superspeed abilities using the Harp. Suddenly, Superman appeared to be moving in slow-motion, while Pan moved circles around him as a blur.

Pan, feeling cocky, told Superman that he would get a free punch at him. While Superman did so, Pan stole his super strength from him using the Harp. As a result, Superman nearly broke his knuckles on Pan’s jaw. Pan began pummeling Superman real hard (lying the Harp aside) and tried to intimidate him into confessing that he was really a coward.

More than a year later, Clark Kent was assigned to checking up some disturbances in the Salt Desert of Utah . He went there as Superman and found a whirlwind. It had covered a car containing three people; Lois Lane, Dr. Ezra Royko the meteorologist, and Jim the desert eremite, that served as their guide.

Jim showed Superman some strange thing he had seen earlier. It was a transparent castle in the desert of alien architecture. Superman, unable to study the castle using his x-ray vision, entered it, but was mysteriously thrown out. Inside the castle some mysterious enemy in a battlesuit taunted him and promised to kill him later. After that, the castle disappeared.

The man, unknown to Superman, was Nyxly. Upon his prison release, he had come to the desert to search for a new Pan Harp. Instead he found this mysterious castle (which was Martian in origin) and several mystic weapons inside it.

Nyxly put on a battlesuit, and used its abilities to locate Superman’s home in Metropolis (or rather it was Kent’s home). He entered Clinton Street 344.

Inside, he asked a small boy for directions to Superman. But suddenly both were run over by a maniacal motorcyclist. The bike also carried a pet lynx. Strangely the slingshot attachment of Nyxly’s suit swapped the consciousness of the kid, named Billy, and the lynx.

Nyxly hurried away, and the mind of Billy followed the mysterious man in the body of the lynx. The suit gave Nyxly directions to Kent’s apartment. He broke in, and stood there ready to ambush Superman when he would appear. Meanwhile, Billy the lynx went to the prison where his own comatose body lied.

Superman, hearing about the accident, went to check up his old friend Billy in the hospital. He found the lynx there with Billy. While in the vicinity of Billy’s body, Billy’s mind could speak telepathically to Superman. Superman was thus warned of the threat in Kent’s apartment.

Superman flew straight through the outer wall of his apartment, flat-footing Nyxly. Supes grabbed his slingshot, destroyed it, and threw Nyxly out. Having lost his best weapon and his ability to fly, the criminal was arrested and jailed.

AFAICT, he hasn’t been seen since (Ed. – actually he did in 1985, but there weren’t full appearance lists back when Peter wrote this).

Ferlin Nyxly is a small, regularly looking guy with brown side-combed hair and a goatee.

In his Pan suit he was covered by brown fur over his entire body, except the hands and the head. He also wore a pair of goat-like horns.

The Martian Battlesuit looked like the typical medieval full plate armour and had an orange slingshot attached to the right glove.

Ferlin Nyxly is a cowardly man with a low self-esteem. He uses sneaky, cowardly tactics and loves to gloat to boost his ego. He is jealous of Superman and wants revenge on him for humiliating him.

Nyxly is much for wishful thinking, which is exactly why he happened to stumble upon the incredible weapons he used.

In combat, he will try to intimidate opponent into giving up and acknowledging him as the superior. He will also spends lots of Hero Points  on Initiative if need be, in order to begin attacking. Having once felt how it feels to be a near demigod he longs for such power again. As a result, Nyxly spends all of his time and energy to get such a power base again.

Pan, although deadly to Superman, was a minor crook in the pre-Crisis continuity. He could easily be inserted into current continuity and be used as a Superman foe, somehow also including the Martian Manhunter into the adventure.

Equipment:
One of the following: 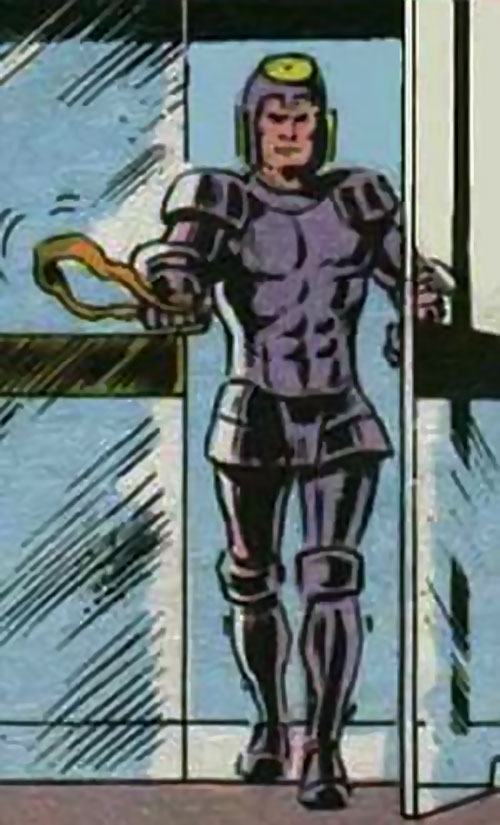