Panic is a member of the Freelancers mercenaries.

Panic’s size limits her mobility and her endurance. On the other hand, she can use it to deploy above-average strength.

Her main assets are psionicPsionics are sci-fi style psychic powers powers. She demonstrated the following :

Some examples of Panic’s use of triggers found by scanning : 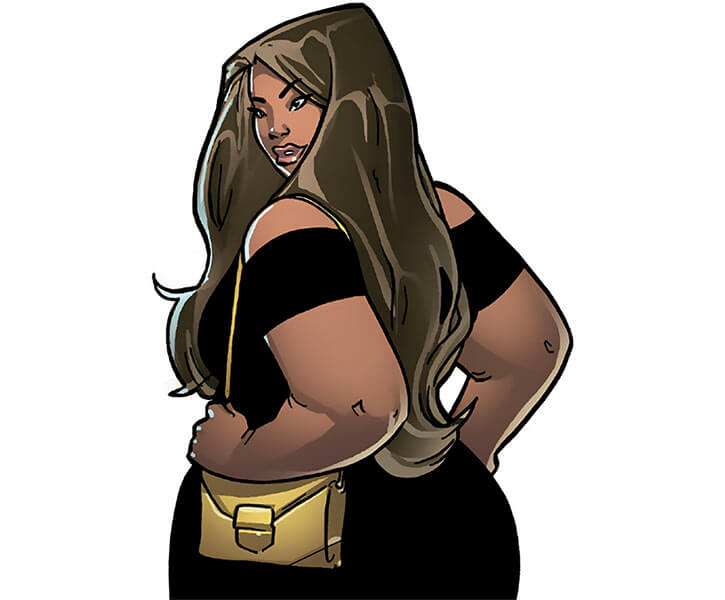 Panic seems to be the cruellest of the Freelancers. She gets her kicks by harming, traumatising and humiliating defenceless persons.

She also seems fond of driving.

Panic is a high-ranking officer of the fashion police. She also despises the poor and unrefined.

Like the rest of the team, Panic is collected and confident in the field. The Freelancers have money, do you understand ? MONEY ! STASH ! SMACKERS ! SAWBUCKS ! WADS ! DUCATS !

“We’re the Freelancers. Punching down is what we *do*.”

Her purse ain’t big, but there’s room for useful stuff. Starting of course with a smartphone.

Mind Probe isn’t technically necessary for her other Powers. But it provides her with valuable intelligence.

I was reluctant to use the Psy-Ops Schtick – this is the fourth time it is deployed. But the crux is, it allows for hooking Character Interaction (and Mental compliance Powers) onto mental and emotional Drawbacks.

These two parts of the system really should talk more. And the Schtick is a simple stab at that.

I went with the usual WORG approach. Model everything she does, using numbers that make sense with her tactics and achieved effects.

But as I always say, readers can simplify stats to their liking. Whereas adding missing detail is much harder.

APs of Snare are higher since it’s what she went for when confronted with tougher targets, such as Young!Cyclops. Note that the listed APs assume bonuses from exploiting mental Drawbacks.