Admittedly it’s not a major character, but this was… unusual and worth a few notes.

This dog appeared but once, in a 1966 Sarge Steel story published by Charlton Comics. Paradogs — dogs trained to parachute — were still a thing back then. So were “wonder dog” characters, heroic canines of impossible acumen and power (think Lassie , and let us know if little Timmy fell down the well).

The paradog is an exceptionally fit and intelligent Doberman Pinscher with extensive training. It seems to be about 26 inches tall and weighs about 75 pounds. It excels at understanding spoken commands (at least in French). While it is a normal dog, it might be smarter than some people you know.

The Doberman is trained as an attack dog (going for the throat) and a sentry dog. It was also taught how to follow its master under nearly any circumstances. Being a highly athletic specimen, the paradog has been observed jumping over 7’ tall fences (!).

It is also capable of making complicated judgement calls. If its master appears to be captured, it will gauge whether it should intervene and fight or go hide nearby, evading enemies until it can contact its master again.

As its name implies, the paradog is trained to parachute using a special harness, and get free of it after landing. It is also trained to run through minefields – it is heavy enough to trigger anti-personnel mines, but fast and small enough to get away before they explode.

The Doberman undoubtedly knows many other tricks and military skills. For instance typical real-world French elite K9 training includes disarming techniques (by biting a handgun-holding hand and keeping it locked) or attacking motorcyclists.

This Doberman is a specially trained military hound owned by the SDECE , then the main French intelligence service. It is deployed to support top agents facing difficult situations in remote areas, and can be parachuted in very quickly.

The paradog was seen assisting SDECE agent Nicole Planchet, who seemed very familiar with him and vice versa. Being a highly talented spy but not a combat specialist, Planchet was an ideal master for a special operations attack dog and had an excellent rapport with it. 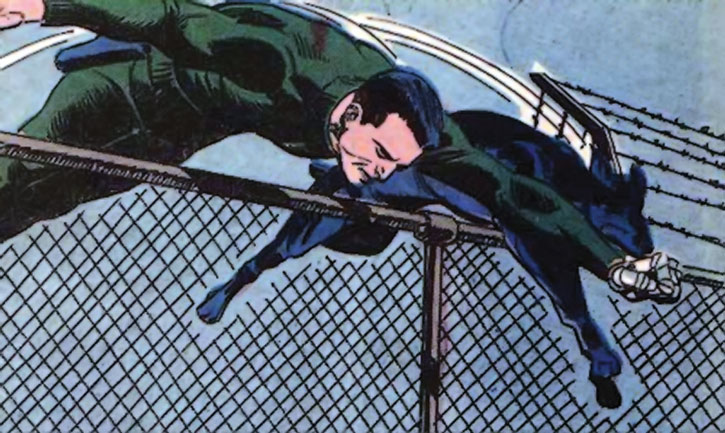 Planchet was at that point working to counter the efforts of terrorist organisation POW (Prosecutors of the World). POW was scheming to kill a list of top espionage agents to intimidate world powers. Only two agents were still alive — Planchet and the American, Sarge Steel — having both faked their death.

Nicole located the POW base, and had the Doberman airdropped in to assist her. Sarge Steel soon also parachuted in.

The trio penetrated the security of the POW base, but Sarge Steel deliberately had himself and Planchet captured to further his plan. Seeing this the Doberman sneaked away and hid, waiting for Planchet to come back and evading enemy security. It’s a really smart Doberman, OK ?

The two agents blew up the entire POW base and narrowly emerged alive. As they did the paradog, the only other known survivor, came to check whether they were OK.

See peekchurs. The paradog is a beautiful, very healthy Doberman.

The paradog lived in the Charlton continuity, which was retroactively designated Earth-4 and eventually collapsed into “New Earth” after the Crisis on Infinite Earths. There’s little reason to assume that it did not exist in the 1960s of the DC Universe, though.

In superheroes universes, exceptionally gifted dogs (such as Rex the Wonder Dog or Blaze the Wonder Collie, to take an example from each major publisher) are not terribly rare. Having K9 programs with ’elite agents’ is thus not unreasonable for agencies who traditionally rely on canine helpers. “Wonder dogs” can accomplish a lot !

Bonuses and Limitations:
Shrinking is Always On, Already Factored In and Innate. 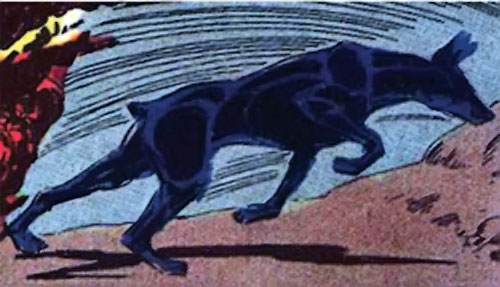