The Paratwa appeared in a trilogy of science-fiction novels by Christopher Hinz. Liege-Killer, Ash Ock and The Paratwa were published from 1987 to 1991.

This article has plenty of S P O I L E R S about it.

Paratwa are “binary interlink assassins. They are one mental and emotional being but have two separate bodies, known as “tways”. They are genetically designed to exceed peak human physical abilities, giving them superhuman reflexes, strength, senses, and movement speed.

They are trained in every possible aspect of killing, from weaponry and unarmed combat to military strategy.

Skills and attributes vary greatly by breed. The North American “Jeek Elementals” and the Russian “Voshkof Rabbits” are considered unbeatable in “normal combat”. Even a Paratwa of a lesser breed (such as the Terminus assassins or the Japanese “Loshito” breed) can wipe out everyone on a crowded city block within 10 seconds.

They also use tactics to duplicate the appearance and behavior of a target. This works to the point of fooling the target’s family, friends, and coworkers.

Known as “sapient  supersedure”, this process was commonly used by Paratwa. It was done both for counter-intelligence purposes as well as for personal advancement within human organizations. Say, replace the man in line for promotion to manager and thus become the manager yourself.

Sapient supersedure was not as commonly used amongst the lower breeds. But it allowed the Ash Ock to gain control over major governmental institutions.

Paratwa are masters of the Cohe wand. These look like a black egg with a small, silver tube protruding from one end. Powered by pre-Apocolyptic technology and controlled by subtle hand pressures, they are believed to be the most powerful hand weapon ever devised.

Cohe wands emit a beam of black energy capable of slicing, impaling, or melting. This ray remains connected to the silver protrusion even as it moves towards its target.

While only the leading 6-18 inches of the beam are dangerous, some Paratwa master a technique which uses the harmless after-trail connecting the front edge to the cohe itself as a distraction. This leads targets to avoid the after-trail while being lured into lethal front end.

While a trained Paratwa can follow a target up a spiral staircase with a cohe wand beam, the weapon is extremely difficult to use. Most untrained wielders risk severe injury or death by simply activating it.

The Jeek Elementals were capable of a signature technique known as the “Lariat”. Wrist control allowed the Jeek to encircle the target’s neck with the cutting edge of the beam and then tightening the noose, garrotting the neck from all sides evenly. No other breed was capable of this maneuver.

(This technique is a Devastating Blow with an additional Trick Shot, adding +2CS to the OV without an accompanying negative CS to the RV – “for the sake of style.”).

The first Paratwa was created in the mid-21st century. Scottish scientists injected a pair of lab-bred human fetuses with cells from another artificially grown lifeform, called a McQuade Unity.

Several years earlier, it was discovered that two samples from one of these primitive cellular masses were capable of remaining in telepathic contact with each other, even when separated by thousands of miles.

Segments of this McQuade Unity were injected into these fetuses in the hope that two genetically different humans would develop a permanent telepathic link. Instead, the two fetuses metamorphosed into a single consciousness. The McQuade Unity enabled their brain patterns to interlace – to develop as one entity.

The result was a creature with a single discrete awareness – one mental/emotional consciousness – yet inhabiting two randomly selected physical bodies.

In 2058, the New Jersey-division of Intellitech Hydrocomco released the first brood of combat Paratwa onto the world armaments market. From a military standpoint, they were an instant success. By the year 2070, with the world coming apart at the seams and over a hundred mini-wars being fought on any given day, the demand for these Paratwa increased astronomically.

By 2080, there were 30+ breeds available from the genetic labs of two-dozen countries. Warriors, bodyguards, and assassins… the genetic labs created them and sold them to the highest bidder.

Accelerated developmental programs were used to train the Paratwa. The breeding labs utilized drug and neuromuscular enhancers – anything that might give their Paratwa an edge over the competition.

By the time a binary interlink reached the age of five, it had already learned to hunt and kill its own food. They were trained in all methods of hand combat and were given state-of-the-art weaponry. By 2090, there were two breeds – namely the Russian Voshkof Rabbits and the North American Jeek Elementals – that were considered undefeatable in normal combat situations.

During the final days, some 7,000 Paratwa assassins were believed to have directly responsible for the deaths of over 150,000,000 human beings. Under the guidance of the ruling caste, the Ash Ock (Codrus, Theophrastus, Sappho, Aristotle, and Empedocles), the Paratwa reached new heights of destruction.

With intelligence well beyond that of even human genius (as well as being the only Paratwa capable of unlinking and operating as separate beings), the Ash Ock were able to plan in terms of centuries rather than years.

The nuclear and biological obliteration of Earth in 2099 was believed to have destroyed all of the assassins, along with much of humanity. However, the Ash Ock had foreseen the Apocalypse and prepared for it. While believed dead by humankind, at least three of the ruling caste survived.

During the late pre-Apocalyptic period, the Ash Ock’s greatest enemies were E-Tech. This was the organization responsible for controlling technological growth to prevent a second societal collapse.

The E-tech’s elite group of mercenaries specialized in hunting Paratwa. All but that group’s field leader Gillian and his dwarf partner Nick died in an ambush set by Reemul, “The Liege-Killer”. He was an insane Jeek who served the ruling caste.

Gillian was shaken by the loss and Reemul’s disappearance. E-Tech placed Nick and Gillian in stasis in the event that they were needed again. Nick had also planted two programs deep within the computers of E-Tech that would lead to their awakening in the event of a Paratwa-related problem.

When a Paratwa was awakened from stasis and set loose in the colonies 200 years later, current E-Tech director Rome Franco went looking for solutions. He discovered the first program, and awakened Nick and Gillian. Nick refused to tell Franco what the second program did. He told him to hide its existence from Gillian.

Acting in secret to avoid confrontation with E-Tech’s political enemies, Gillian and Nick recruited a new team of hunters. These came from a group of outlaw “Cousteau” pirates.

Gillian found that the rampaging Paratwa was in fact Reemul. Knowing that Reemul’s presence meant the involvement of the Ash Ock, the hunters began looking for other signs of Ash Ock involvement.

They found that the Ash Ock Codrus had gained power at the highest levels of colonial society through sapient supersedure and was using it to stifle technological growth. As this plan aided the Ash Ock’s enemies in E-Tech, Nick suspected deeper levels of manipulation.

Nick and Gillian, with the help of Rome Franco and an E-Tech programmer named Begelman, found that Paratwa had taken control of the ships. They would be returning to Earth and to the colonies in 56 years to conquer humanity. Codrus had been left behind to ensure that mankind was technologically inferior to the Paratwa and thus unable to defend against the incoming attack.

Emergence of the self

During the hunt, mind blocks placed on Gillian by Nick unraveled. Gillian was set in front of the second program which unlocked the rest of his memories. He was in fact the surviving tway of Empedocles (long believed dead), youngest of the Ash Ock. Gillian opted to stay with Nick and E-Tech in recognition of whom he was, rather than who he had been.

The hunters found the identity of one of the tways of Codrus. They also discovered hidden communications centers on the planet’s surface, allowing Codrus to communicate with the ships. Gillian contacted the ships and used his brief conversation (speaking as Empedocles) with the Paratwa, Meridian. This narrowed down the list of suspects for Codrus’s tway.

Nick and Gillian confronted the other tway in a public setting. They used the situation to set a trap for Reemul. Gillian was able to call up some of his long-dormant Paratwa abilities and kill the insane Jeek.

He and Nick were then placed back into stasis while the colonies began to prepare for the return of the Paratwa in 56 years.

Paratwa vary in appearance as much as any other people. In fact, even the two tways of a single Paratwa may look nothing alike, as Paratwa are often/usually created from two, non-genetically related fetuses.

Add to this the fact that every Paratwa is trained to be a master of disguise (capable of posing convincingly as the opposite gender with little effort) AND has no problem with undergoing cosmetic alteration in order to pose as another person, and you find that even a specific Paratwa may not look the same from day to day.

Paratwa live to kill other living things. Paratwa personalities vary by breed, nationality, and particular quirks, but they share that one trait universally.

“If Paratwa have one weakness, it’s their predictability. Most assassins are rigidly territorial, doing their killing within small geographic areas. A few even had homes in respectable suburban communities.”

“They were creatures specialized almost to the point of absurdity, and such specialization inevitably led to the formation of strong habits. Repeated actions were predictable actions.”

“Incest between tways occurred, but it was more common for the Paratwa to acquire a pair of sexual partners or share a single partner. For some reason not fully understood by students of Paratwa psychology, many of the creatures became pedophiles.”

All Paratwa must “flex”. This is a process not fully understood by even the most advanced Paratwa physiologists. Flexing is the mental orgasm of being totally out of control. In theory, a way in which a Paratwa releases internal pain that has been suppressed during years of training and rigorously imposed discipline.

It is a need to kill in a completely uncontrolled and inhibited manner. This may be done through the killing of large numbers of humans or wild or domesticated animals. If this is not done in regular intervals, the pain and stress overwhelm the Paratwa, causing it to risk going berserk at inopportune times.

While the Paratwa are tied fully into the world from their books, they fit in a couple of other places in comic book worlds. In the DC Universe, they may have been created by the Council of 10 or scientists involved in it as a follow-up to the Paul Kirk/Manhunter cloning project.

As later books in the series reveal that the Paratwa are part of a plot by an alien race, they also fit well into the plotting of 30th century Dominators. They would be part of events that lead up to or immediately follow the Great Collapse. But they would need flight and sealed systems equipment comparable to the Legion at its peak.

Of course, a Batman/Predator type scenario isn’t out of the question, either.

The Paratwa abilities might easily be mistaken for mutant powers, which would make it look like a civil war rather than an external attempt at an overthrow and thus discourage outside interference.

As for the Wildstorm Universe – two words: Kaizen Gamorra. The Paratwa could easily backfire on Gamorra, leading to an even more horrific regime than the one already in place.

Bonuses and Limitations:
Artist (Actor) skill suffers a +1 Column Shift penalty to OV/RV if both “tways” are together while mimicking non-Paratwa.

Paratwa vary by breed. Paratwa Physical abilities will have Dex/Str/Bod ranging from 7/4/4 (lowest) to 13/6/8 (highest).

Weaponry can range from 10 to 15, Martial Artist from 8 to 13 and Superspeed from 8-12. Other skills and attributes will also vary by as much as 3-4 APs in either direction. 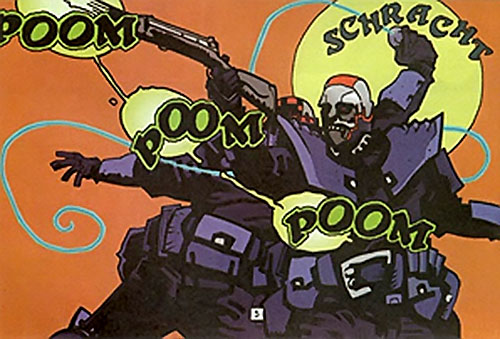