Paris is a highly accomplished special forces commando. His level of training and dedication lies even above those extremely high standards. His martial arts and close combat training regimen is particularly gruelling. His level of fitness is close to being peak human.

Paris often works in close combat with a knife or even his hands (which makes sense in DC Heroes RPG terms). He seems proficient with a vast arsenal of blades, melee weapons, small arms, and other means of military and martial destruction. But they’re often not very useful against his opponents.

An instinct for death

Since his childhood, Paris developed an instinct allowing him to sense how to hurt or kill people. His deductive abilities in this specific field are uncanny. For instance he guessed that destroying Deathtrap’s weapons while they were under full telekinetic control (a previously undocumented ability) would result in psychic feedback.

He also somehow determined that the Ferryman should be deprived of his staff to be fought on more equal terms.

Likewise, within seconds of encountering a mutant alien horror, Paris knew where its heart was and waited for it to open its mouth. He just knew his 9mm pistol would not penetrate its skin. Once the beast opened its maw Paris put three rounds into the heart via the throat.

(In DC Heroes terms, he used his Weakness Detection on the OV of the creature, which was considerably lower than it’s RV. Then he leveraged this with a Devastating Attack).

Although Paris’s Scientist Skill is chiefly used to find weak points in people, aliens, demons and the like, he once used it to find the weak point in heavy rubble. This allowed Fahrenheit to blast the team free of a collapsed building.

Mendoza was born in the middle of nowhere, near the California border. His mother was a waitress and his father a criminal – chiefly a meth pusher. The older Mendoza also organised dog-fighting competitions. By the time Liam was four he was taking care of the numerous fighting dogs.

Around this time his mother either left or was killed by his father. Eventually the dogs were confiscated by animal services the morning before a big fight was due. This put Mendoza’s father in a very awkward position.

In order to have a show, he bet that his son could take a customer’s son. But the other kid was significantly bigger and older than Liam.

Mendoza, then aged five, got severely beaten, and realised that he was about to die. At that moment he instinctively struck at a weak spot of his opponent and disabled the boy, nearly killing him.

This fight was a big success. It allowed his father to launch a whole new circuit with Liam fighting other customers’s kids. Or kids procured in the area in exchange for money or drugs. Those were usually bigger than Liam, but he developed an uncanny instinct for fighting.

Eventually another bout fell flat as Mendoza’s opponent was a no-show. Improvising yet again, his father put him in the ring with one of the fighting dogs.

However the dogs loved Liam, who was their only friend. They just wanted to play with him. Drugged to the gills, his father had a customer restrain his son, grabbed a pump gun and shot the dog dead.

He then turned to shoot his son. But the nimble kid dodged and the elder Mendoza hit the customer restraining Liam instead. In the confusion, Liam ran to the dogs’ cages and sicced them on the audience. Apparently, the spectators and his father were killed or severely wounded by the dogs. Liam was finally alone with his only friends.

From there, Mendoza kept making money by fighting, chiefly on underground bare-knuckles circuits. He was often pitted against opponents even bigger and stronger than himself since he was still a teenager. Yet he never lost. He eventually got arrested, and given a choice between the Army and jail. 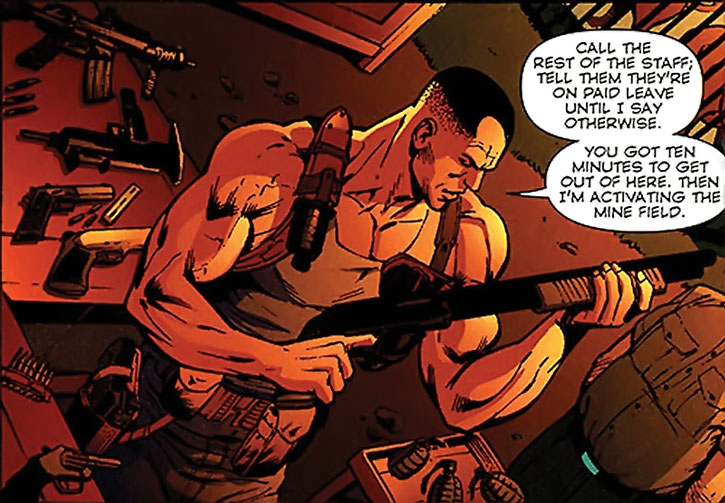 Mendoza was soon transferred into the special forces. This is where he chose the call sign Paris – and became a legend within the SOCOM troops. Eventually, he was transferred, along with a number of exceptional soldiers, into StormForce. This was a non-superhuman combat unit of StormWatch.

(The mythological Paris  was the son of Priam and thus King of Troy. He’s the one who eloped with Helen and started the trouble. One of his greatest feat was killing the invulnerable Achilles with an arrow right in the famous heel.)

Despite the skills of its members, the StormForce experiment never was too successful. Still, even in this environment, Paris managed to shine.

During the mid-2000s, his unit (a smaller StormForce unit stationed in New York City) was deployed to assist the main StormWatch unit. Mendoza and his comrades tried to apprehend the famous superhuman mercenary Deathtrap.

The StormForce soldiers were slaughtered. But Paris, the last survivor, managed to nearly knock Deathtrap out. Mendoza then forced Deathtrap to retreat by spotting a weak point in his powers.

This caught the attention of Jackson King when he reviewed his files to create StormWatch PHD some months later. Mendoza was recruited into the PHD just as the StormForce unit was downsized due to budget cuts. The troopers replaced with Spartan robots.

Paris has next to no social skills, but he’s fully aware of that. Thus he simply chooses not to socialise or fraternise. Besides, he prefers to keep training anyway. He also prefers to be addressed by his code name.

Most of his interactions with others are done in a succinct, extremely military-like aspect. He speaks as if writing a brief operation report coldly stating facts.

Of course he keeps his body in top shape – no cigarettes, no alcohol, no meat, no processed food, etc.

Lauren throwing herself at him (due to her own neuroses, ironically) shook him off this fairly comfortable situation. Liam lacked the experience or the instincts to handle this properly. After he made the mistake of speaking his mind (though being able to tell someone about his childhood was a relief), he largely retreated back into his usual discipline.

The pro from Dover

Given his past and his job, he finds that staying 100% disciplined and uncaring, suppressing his humanity, is his best way to stay sane. It allows him not to let the death and the horror get to him.

Most of his friends are animals. His place in the desert near Vegas has a large number of rescued animals from roadside zoos, canned hunts, abandoned exotic pets and the like. He has excellent rapport with those, having grown up caring for fighting dogs. This sort of weird zoo in the middle of nowhere is very important to him.

Most of his pay (which is considerable given the hazardous duty bonuses) goes into maintaining the zoo. He can even pay staff that works the place when he cannot (hence his mediocre Wealth score). Liam slept in the locker room of the StormWatch PHD base, to save his money for his Nevada animal rescue operation rather than spend it on New York City rents.

Paris is not a posthuman, but he’s very good at what he does and utterly dedicated to his job. Which is taking out people and things who are way more powerful than he is.

(Reporting in a mechanical tone) “StormForce New York was mobilized at 0715 hours and dispatched to support StormWatch Prime in a post-human conflict. We responded to the scene and observed that StormWatch operative Blademaster had been fatally wounded by the international terrorist Deathtrap. We engaged Deathtrap, whose sword remained lodged in Blademaster’s body. Though unarmed, he used his post-human abilities to materialize new weapons and return fire. Agents Lubbock and Patel were killed.”

“Just an instinct. I’ve always had good instincts when it comes to killing people. That’s why you guys pulled me out of special forces.”

“Bulletproof skin doesn’t help much when your brain slams against the inside of your skull.”

“You are training to combat beings that are so far above you, they view you as a child. A pet. Or a piece of meat.”

“Boss, with what I’ve done… with what I do… If I start letting stuff get to me… *that’s* when you wanna lock me up.”

Bonuses and Limitations:
Weakness detection is a Skilled Power.

Bonuses and Limitations:
Scientist (Analysis) is only useable to come up with ways to hurt or kill people, or destroy things.

This writeup assumes the use of DCH 3rd edition Martial Artist (which we do not usually do). 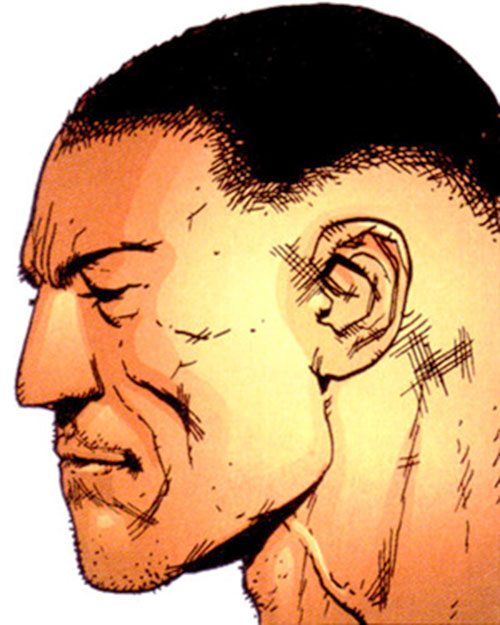 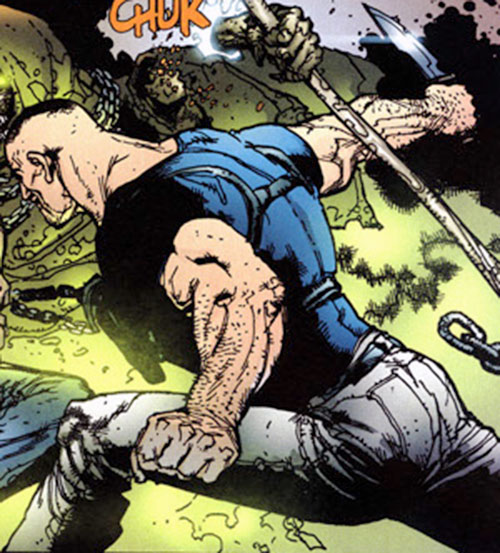 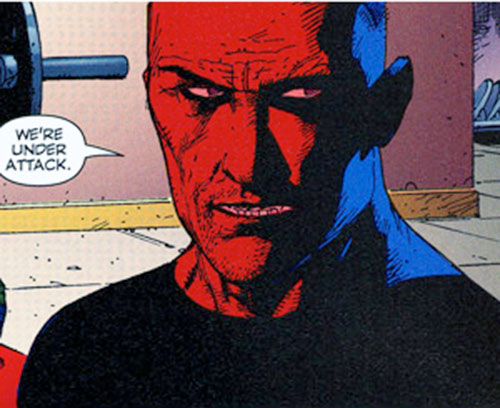