One of the stories in a 1991 Justice League Quarterly issue was… not good. But ! It had some generic, throwaway, forgettable super-heroes. Which could be a useful resource in some stories (but just not to kill them away, that’s so tired).

So we have some quick notes outlining these guys, imaginatively called The Hero Group.

In JLQ#5, General Harjavti tries to reassure the Global Guardians that he is a benevolent ruler of Bialya, and that they should trust him. After all, he was at this time giving them financial support. He then tells them that Lower Pluxa, a neighboring country (yeah, right), is planning to “annex” Bialya (yeah, right).

Knowing that Bialya has superheroes, Lower Pluxa has gathered together its own hero group called, well, The Hero Group. The Global Guardians are convinced to go fight The Hero Group.

During the battle, the Global Guardians learn that The Hero Group was told a similar story, that Bialya planned to “annex” “Lower Pluxa” (also spelled “Lower Plaxa”). They were told this story by President Fortesq of Lower Pluxa.

They come to the conclusion that the two leaders just wanted to see them fight. The heroes go back to their leaders and force the two of them into a boxing ring. If they want a fight so badly, let *them* do the fighting. A moronic story with moronic new characters.

The Hero Group probably split with Fortesq just as the Guardians did with Harjavti. They could easily be used as innocent dupes in anybody else’s schemes, however, as they seem to be incredibly dopey.

He has grey skin (see Compass).

He wears a white bodysuit which covers his entire body except his hands and his head. His hair is black and short. His bodysuit is covered with black “particles”. 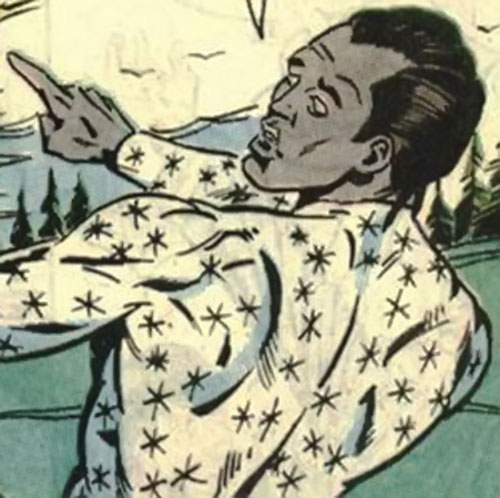