She appeared in two stories in 1964, as an early example of a policewoman in comics.

More famous examples started occurring during the 1970s, with characters such as Lady Cop or Jean Dewolff.

Pat Powell trained since childhood. She was the first probie of her Gotham City Police Academy to be #1 of her class in all four rankings – academic, physical, firearms and overall.

Though she’s a *girl*, she can – gasp – shoot her snubnosed .38 service revolver (presumably a 2” Colt Detective Special) with excellent accuracy.

She also can use trips, throws and locks in unarmed combat.

She is a typical Holmes-like character from 1960s Batman stories. That is, she always notices minuscule details and draw improbably accurate conclusions from those. She’s generally very smart and intuitive, and takes excellent initiatives. In terms of detection, she’s in the same league as the contemporary Robin.

Patricia Powell, born circa 1940, is the daughter of Lt. Det. ”Bulldog” Powell, back then a 25-year veteran of the GCPD. Patricia is apparently a scion of an upper-class Gotham family. She idolized her father for his vast accomplishments as a detective, and her life vocation was to become police like daddy.

Since childhood she showed remarkable talent in her vocation. Her father trained her physically and intellectually. She apparently became even better than he was at detection while she was still a teenager.

Daddy sent her to “the best schools” — which our game stats assume means studies in criminal law and criminology. If this guess is correct, she was among the early formal students of the discipline, as university courses in criminology began during the 1950s.

After graduating, she took a year off on the Gotham social circuit before joining the police academy. While having upper-class fun, she thrice ran into the handsome Bruce Wayne, and developed a romantic fixation on him. However, every time she was masked – whether because of a costume party or because they were diving underseas.

Meanwhile, important changes were taking place. Though there had been policewomen for quite a while (see our Lady Cop profile for a capsule history of women in the NYPD), 1964 was the first year in New York City and Gotham City when women, after multiple trials and appeals, were allowed to take promotional exams.

The officer is off patrolling all the nation

The gifted Patricia Powell made another landmark that year. Powell was the first probationary officer at her academy to rank #1 of her class in all categories. That earned her a plaque and an immediate promotion to Detective. As it happened, Batman was giving the graduation speech that year. Thus, he awarded the younger Powell her plaque.

(There had been female police detectives before, such as “Dead Shot Mary” Shanley  during the 1930s in the real world. But one assumes that the story was based on the civil rights case about taking promotional exams of the early 1960s.)

(Also note that this is the Silver Age  Batman, who routinely worked with the police as a famous masked detective.)

Ms. Powell and Batman worked on two cases in quick succession. Those were the kidnapping of brilliant chemist Dr. Smedley, and a daring heist during a social event at Bruce Wayne’s mansion. During these cases she was partnered with her father.

Though Patricia Powell was scheduled to return in “a forthcoming Batman issue”, she never did.

A dainty but determined lass who is out to be the best detective she can be. She’s primarily about cinematic deduction skills, but has no problem being in the field even when the situation goes tactical.

Like many Golden and Silver Age  Batman good guys, she’s a socialite who doesn’t need to work. Yet she excels at her pursuits because she’s an upper class person. And thus better at things because of reasons.

The story goes out of its way to insist on Powell’s 1960s-style Proper Femininity. Part of her skills is presented as a woman’s intuition, she’s concerned about clothing and parties, and she goes all weak-kneed and emotional at the thought of handsome Bruce Wayne. She even worries that such random swooning spells might compromise her efficiency as a detective.

“I checked on Smedley and found out that his driver’s license requires him to wear corrective lenses while driving — but he left his glasses here, indicating he left against his will !”

“Being a woman, I took careful notice of the masked man’s clothes. Everything he wore was expensive, and imported… and sold at only a couple of exclusive Gotham stores ! The shoe and necktie store clerks remembered him from his general description.”

Patricia Powell is an early Silver Age DC universe character. Back then there already was an unified universe with a continuity, unlike the protomorphic Golden Age  stories. But that was many DC universe reboots ago. Furthermore, it featured a version of Batman that is very different from his Bronze Age and later takes.

If the character is of interest, there are two main paths.

Patricia Powell existed in the indistinct recent past of the DC Universe. She met Batman and Bruce Wayne early during the bat’s career. She’d appear during the indeterminate goofier, lighter period Morrison established before Flashpoint and that serves as an allusion to the Silver Age stuff.

With this approach, her personal history is no longer that remarkable. Further, the dated story elements are no longer applicable. This leaves you with her name and general skills and precious little else.

Of course, that might be the point. One may want to design a new character, and only make her a new version of Patricia Powell for old school cachet.

Leave her in 1964, and have her appear either as an elderly woman (who may have had quite an interesting career, though it took place well before the rise of Batman and Gordon) or as somebody else’s mother, aunt or mentor. For instance she could be a supporting character for some versions of Barbara Gordon, Jason Bard or other Gotham-based detective.

Now that I think of it the post-Flashpoint Batgirl (Barbara Gordon) is, in 2015, dating a GCPD patrolman named Liam Powell who looks about 23. He could easily be Patricia Powell’s grandson.

Q/A during the peer review

Q: A Strength of 1? Really? She can not lift 101 pounds despite an athletics of 3 and winning a physical honor at the academy?

A: Yeah – she’s *never* going to punch out somebody, and any thug or even vaguely athletic dude should outmuscle her because she’s a *girl* and this is 1964 (also, she ain’t big). This is discussed further in our Human STR article.

She can use soft techniques though – hence the little Skills array you can see where I keep her DEX and STR low so she cannot overpower a dude, but she can perform all sorts of “soft” actions such as Acrobatics (Athletics) and Martial Artist (OV or Techniques) at a level that should put her on par with even a big, athletic probie (she comes #1 because she has more HPs than they do).

She also has the Initiative edge, which is important. With this setup, her choice is clear – she’s going for Techniques, not STR, just like in the book.

Likewise there’s a “genre safety” rules bit around her Character Interaction to keep her within the bound of period misogyny (though the story itself is, by period standards, quite progressive).

FWIW Batman briefly describes the athletic training at the academy, which seems to be similar to infantry fitness training, with stuff like obstacle courses and rope climbing. IME, lighter persons have a significant advantage in such exercises over stronger, larger types — assuming of course they are in good shape.

Patricia’s ratio between her APs of mass and her STR ain’t bad, really. 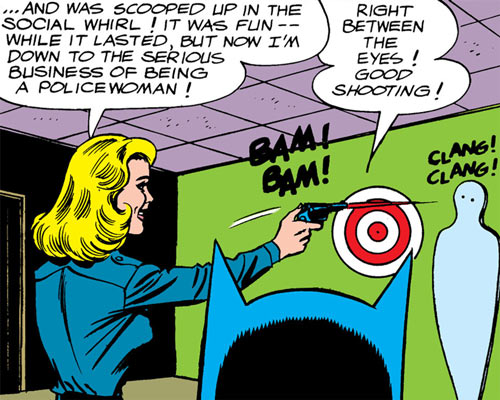