So this is not the Patrick MacGuire of the Newsboy Legion. It’s the Patrick McGuire who appeared in Wonder Woman. Specifically during the late 1960s/early 1970s “karate mod era”, when Diana had lost her powers and was an adventuring martial artist.

This character wasn’t much more than an extra. But it’s fun when forgotten, obscure characters return for an encore decades later. So if a story needs a veteran air transportation expert, why not have Mr. McGuire fill that role ?

McGuire is a veteran military pilot from WWII. He apparently also has extensive experience as an infantryman.

He furthermore exhibited excellent driving skills, and could steer a river boat. Thus, McGuire may have quite the adventurous background. 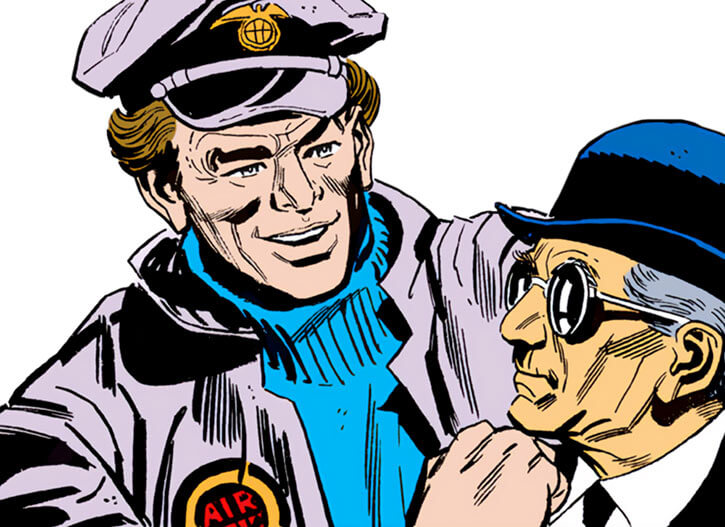 Patrick McGuire, possibly the only comic book Irish-descended character named Patrick yet NOT nicknamed “Paddy”, was an American pilot during WWII.

He once was downed in China, and he knew about Japanese weapons. Therefore, it seems likely that McGuire was a part of the American Volunteer Group air force, best known as the Flying Tigers. If so he likely flew alongside legendary pilot Gregory Boyington  .

When McGuire’s Curtiss  crashed in China, he was rescued by I-Ching and friends of his.

It may have been the hidden monastery where I-Ching studied, although that is not certain. Nevertheless, Ching et al nursed him back to health. They then helped McGuire go back to friendly lines, earning his undying gratitude.

McGuire and Ching kept in touch after the war. In 1970, Ching needed to return to China ASAP, and McGuire jumped at the chance to help.

He was also carrying another passenger, Lu Shan, who was later revealed to be Ching’s daughter.

Ching was accompanied by Diana Prince. Predictably, McGuire was instantly smitten with her.

In Hong Kong, Ching and Diana ran afoul of a nefarious plan by Dr. Cyber. The criminal Tiger Tong also tried to kill them. Incensed that somebody would try to kill “his girl”, McGuire fought bravely at Diana’s side.

Our heroes eventually prevailed against Dr. Cyber, therefore preventing the destruction of Hong Kong. But in the fray, Ching was wounded by Lu Shan.

Not even a cold war

While Diana and Patrick were still dealing with Dr. Cyber, the still-recovering Ching sneaked into the PRC. Diana was dead-set on following him into red country, and McGuire eventually caved in.

Mr. McGuire knew make-up artists in Hong Kong, who disguised him and Ms. Prince as Chinese peasants. He then piloted a small monoprop to cross the PRC frontier, but they were spotted by a MiG. McGuire dodged it long enough to crash-land and flee.

Diana and Patrick made it to the village of Ashai, where Ching was waiting for them. All of Ashai’s inhabitants were to soon be forcibly moved into the North of China, a fate they dreaded more than death.

Slow boat out of China

Having located an abandoned paddleboat, Ching proposed that the entire village use it to reach the southern frontier.

McGuire provided military coordination. He acted as an officer to the brave villagers as they clashed with scattered Red Chinese ground, naval and air assets.

Although they suffered casualties, the villagers, McGuire, Ching and Diana made it to Hong Kong.

McGuire enjoyed wining and dining Diana once before she had to leave. Although circumstances meant he had to share the moment with the commander of the British police.

McGuire is a pleasant, charming, joking man. But he’s also quite resourceful and well-versed in warfare and adventurous endeavours.

He has a friendly rivalry with British military men, and is (or thinks himself to be) a ladies’ man.

The latter means he can be something of a nuisance for attractive women who aren’t interested in him. But back in 1970 his behaviour was considered “normal” — whatever that means –or even laudable.

McGuire has the classic Irish temper of popular fiction. In particular, he thinks nothing of diving into deadly risks to impress a fair Colleen. He generally seems to be a good, courageous man with a big heart.

“Champagne ? Not only do I own this freight line — I’m also the chief steward ! I also believe in the best for my human freight ! Sorry, I can’t join you – I’ll be driving soon.”

“Eddie, that wound has scrambled your brains. A British major — or any other major — taking away a girl Patrick McGuire has set his heart on…”

“Ain’t nobody shooting at MY girl !”

“It’ll take the MiG time to circle and come back and hit us again ! Get out as fast as you can, Diana !”

“You others — rifle grenades – aim for their water lines !”

(Demonstrating the use of a Type 99 machinegun for anti-aircraft fire to Diana) “Well, if you’re awake — let me show you how to use a gun with a kick like this !” (braces against the bipod with both feet and lies on his back) “You’ve got to brace it — and then track the incoming plane — like that !” (BLOMP !!) 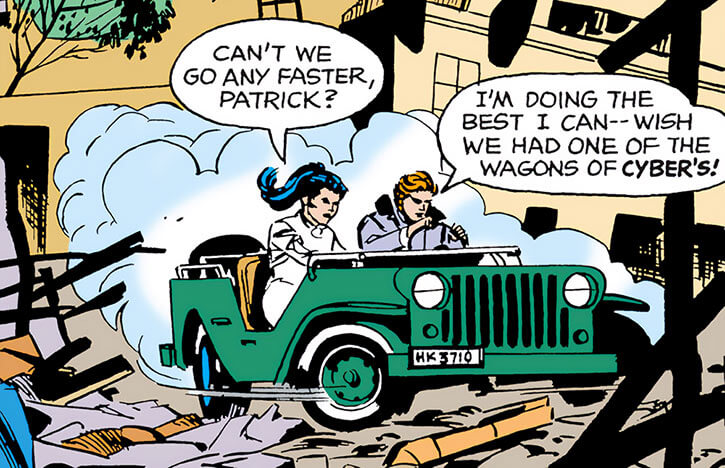 Leadership. Also he was in really good shape for a guy in his 50s in that era.