Like the Spirit of ’76, the Patriot is an All-American, two-fisted action hero of World War Two, with the usual abilities. His shtick was his mastery of the fighting arts (above average for an action hero). He was also pretty good with the shield once he became Cap.

His background as a reporter made him a good detective.

Jeffrey Mace, the man who would become the Patriot, used to be a mild mannered reported for the Daily Bugle. He also happened to be a former U.S. military man. After an incident where the Invaders were captured and brain-washed by the Red Skull, the president asked him to become a hero.

Not wishing to disappoint the POTUS, Mace dropped his journalism career to become the Patriot. He set about the collection of a new team of super heroes, one that could free the lost heroes from German influence.

He decided to make a call for help over the radio. The call that was cut short by Bucky, who’d got in a short scuffle with the hero. After the misunderstandings were straightened out, the two worked together to ask any heroes available for help.

Over about two hours’ time, the Patriot was joined by six other heroes: 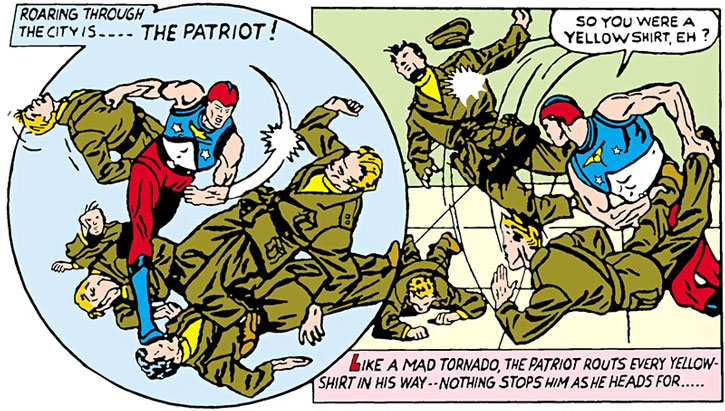 Along with Bucky, these heroes went about tracking down the controlled heroes and setting them free.

After several east coast battles, the heroes finally faced the Invaders directly. They managed to free them by destroying the hydrogen balloon that the Red Skull was using as a base (not a good idea), and which housed the mind control equipment.

After that, several heroes in those two groups continued on in the All-Winners Squad. They were:

The Patriot was associated with these heroes from time to time, but never a full member.

In 1946 Jeff found William Nasland, the second Captain America, dying. He had been killed by an android of Adam II. Before dying, William told Jeff what he knew of Adam II’s plans. Taking the costume and shield, Jeff became the third Captain America.

Your basic, All-American patriotic hero, although with a level of competence far above, say, Mister Scarlet. Jeffrey was quite intelligent and grew wise with years. In fact in his last appearance he warned Captain America about the dangers of being blinded by nationalism, a lesson Cap took to heart.