Beyond the veil of the mundane hide the secrets of absolute power. The works of beings beyond mortals, the legends of realms where gods and spirits tread, the lore of creations both wondrous and terrible—such mysteries call to those with the ambition and the intellect to rise above the common folk to grasp true might. Such is the path of the wizard.
– Pathfinder Core rulebook

As a graduate from Delvin’s local wizards’ school, Patricia wields real magic! As an abjurer, she masters the art of defensive and warding spells.

Like most Player character wizards, she’s darn near a genius. 🙂

She learned simple weapons and some exotic ones, like Alchemist fire.

Patty has done some adventuring on her own but usually as support for a mercenary style-group. So, she has some experience with dungeoneering and fighting creatures in her world. Like goblins, orcs, various slimes, and wolves. 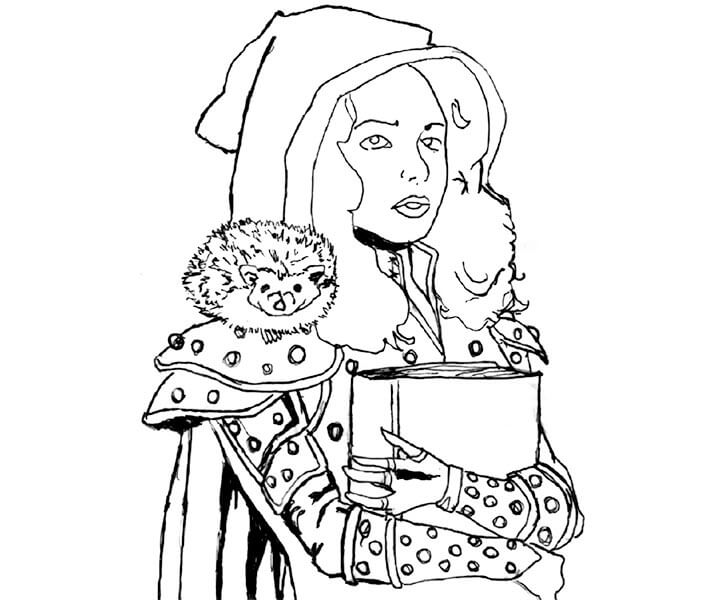 Patricia Pendragon grew up in the small town of Delvin. Delvin is known for its School of Wizardry. Her parents afforded her a good education from a young age.

In her early years, she only took mercenary work with people she knew and trusted. That changed quickly and soon she found herself delving down into earthy holes seeking treasure with men and women she hardly knew.

There was some kind of trouble with the gods of magic. I know, right? How can gods have trouble?

Anyway, Patty learned this from her teachers at the Delvin Wizards’ school. Soon she found, as did others, magic was acting much less reliably.

It was decided. A group (our group), would travel to retrieve a relic, known to allow a Priest of Boccob of enough renown (level), to actually commune with their deity. As it was, there were apparently no Priests of Boccob left. The wizards hoped to tap into the relic at a time when magic was stronger than normal.

The party had quite a trip to make across a continent to an ancient tower that supposedly held the relic in years past. Instead of taking the long trip on horseback, we begged the wizards for a teleportation spell. They relented but still charged us most of the group’s gold. 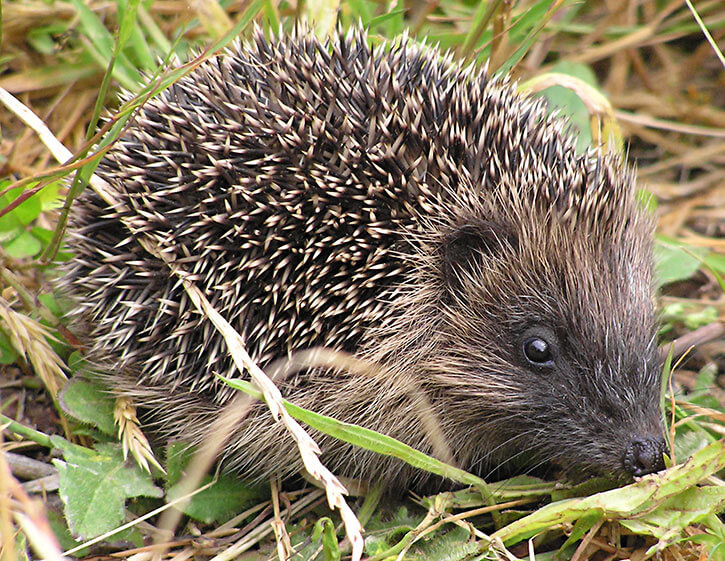 The diverse group had some rough characters. One, a half-orc Barbarian voiced his distrust of magic. Suddenly, he reached out at the last moment of the teleport’s casting, and pulled one of the school mages into the circle, forcing them along for the ride.

We appeared outside a crumbling wall, surrounding an ancient stone tower. We were set-upon by gargoyles. Several human-sized, but three were giants. The group dispatched them without too much effort. The wizard brought along against his will was not happy. He helped with this fight but wouldn’t help further.

Getting inside the tower was no easy task. Once inside the wall, there were magical guardians and traps to overcome. The tower itself was only a three-story structure, and a little unsafe our dwarf told us. But we soon learned it went deep into the ground. Many unknown levels deep.

At one point, the party traversed a ledge into a narrow hallway. We were set upon by a mage at the other end. He used a Lightning Bolt spells to much effect since we were all lined up like ducks. Patty was nearly killed but happily surprised to see her new allies rushing to save her.

Well, the next room held the ghost of a priest. We had to convince him we were priests too and that he was still alive. Then he would show us where the key was to the massive steel cellar door.

What was beyond that door, I’ll never know. It was the last time I played Patty.

The world Patty lived in is your standard-fare D&D-styled world with moderate magic. The pantheon of deities was straight from the Dungeons and Dragons Player’s Handbook.

The over-arching storyline had to do with Boccob, the god of magic. Something was happening and it was affecting magic on a global scale. Each game session, characters using magic, like Patty, would be faced with not knowing if their magic would work at double strength or not at all. 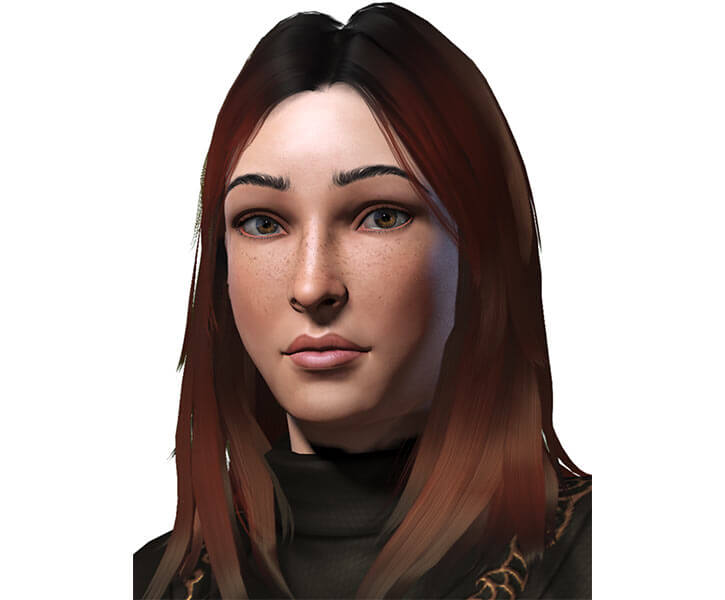 Patty is a young woman in her late teens. She’s decked out like an adventurer. She wears studded leather armor, a grey traveling cloak, a backpack, and a bedroll.

Check it out, she has weapons too. Many are geared towards the beasts she learned about in school. So, she carries silver, cold-iron, and magical weapons.

(I did some extra portraits to spruce up Ethan’s writeup, but the character portrait tool I’m using means I couldn’t do the hair colour right — Ed.). 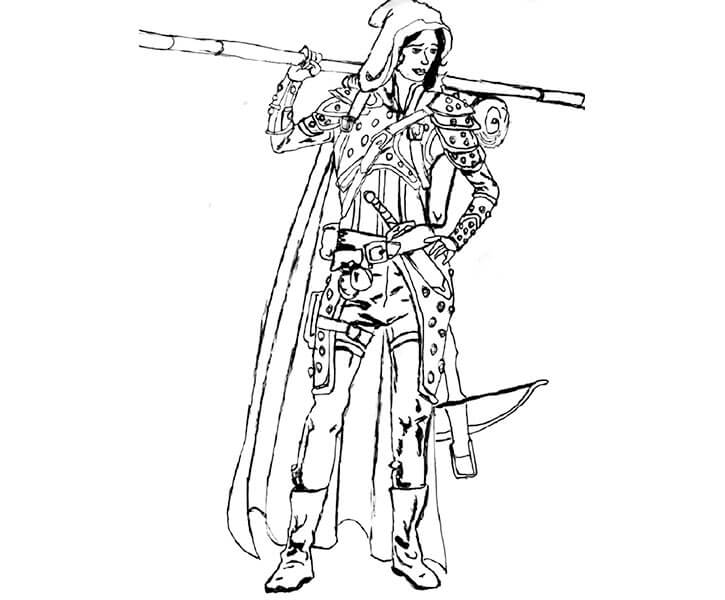 She’s pretty optimistic and still young enough to believe others may die but she won’t.

This is her story.

Kassandrah: “You can trust me, but watch out for these other guys.” (speaking of the rest of the party.)
Patty: “Ummm… Ok.”

“Absence of natural affection – sounds a lot like Behavioral Sink”.

Obviously, Patty can fit in alongside other D&D characters.

In a game of heroes, I still see her as a student. Put her with one of the many established mystic characters. She’d be learning from them but she’s also the one who heads out to find adventure. 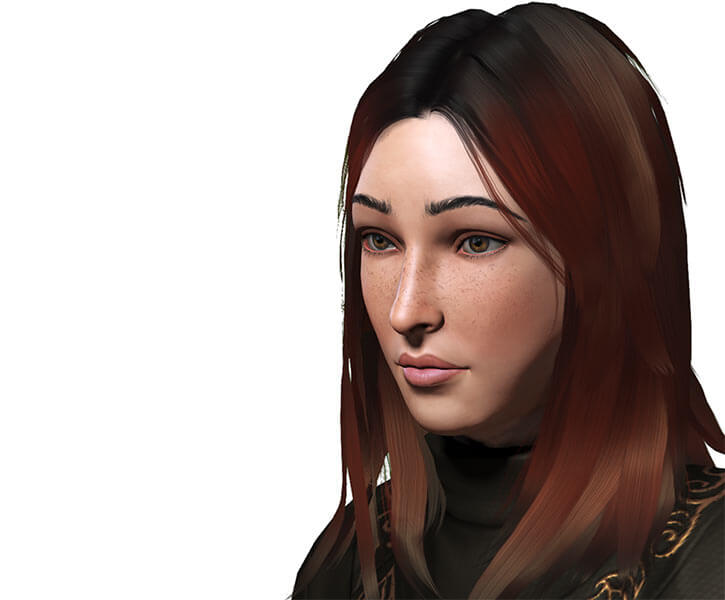 MIA to Magic, Power Loss: Iron Will drops to 00 APs if Patty’s familiar is killed. 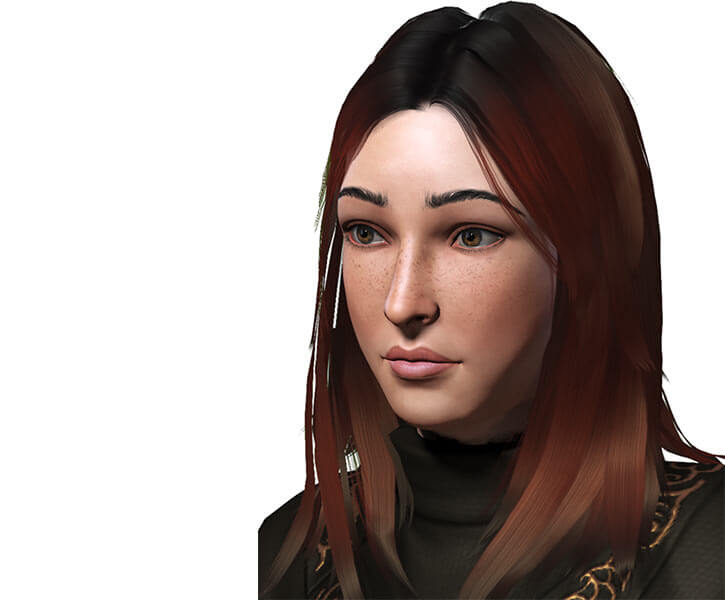 Minor Healing Potions borrowed directly from Peter’s Major Comar even though he’s from the Palladium system.

Patty’s Studded Leather armor causes her to have 15% spell failure. Since this isn’t covered in the Sorcery (VGA) article, just use the 2D10 for percentage whenever she casts a spell.

Patty isn’t trained in the use of armor, so it takes her a little longer to don/remove it without help.

This was one of my first times playing Pathfinder, also a rare occasion that I played a woman. It felt a lot like Dungeons and Dragons 3.5 but base classes had a few extra abilities.

Number of Spells Patty can cast per day

I swiped several spells from the Baldur’s Gate writeups. I know those are based on 1st/2nd edition D&D, but thought it would mesh easier with what’s online now. Added two 2nd level spells.

Having a familiar is great.

Cost: Free.
In the game I played, the GM allowed Cantrips/Prestidigitation to do almost anything. Examples:

The main limitations was: As long as the magic didn’t affect combat or the storyline.

Cost: 7
Power: Mystic Blast (no AV): 03
Bonuses and Limitations: Mystic blast cannot penetrate the Shield VGA spell (-1 pt).
Notes: A rare spell with no AV, which is instead governed by the Accuracy (Magic missile) Skill (BC 5, FC 1). However, this skill can have twice as many APs as the AV of a fighter of a similar level in our power scale discussion. Magic missiles do not normally miss, and multiple missiles are represented by Critical Attacks leveraging this big AV.
Example: Lvl 5 fighters generally are capped to an AV of 05. A lvl 5 mage could thus have 5×2=10 APs of Accuracy (Magic missile).

Cost: 7
Power: Darkness: 01, Duration: 06
Bonuses and Limitations: Darkness only affects creatures with the Evil alignment, Darkness has a further +4 APs Special Volume Bonus.
Note: Summoned fiends cannot enter the Darkness, but this is considered a small Drawback of theirs rather than a property of the Darkness.

Source of Character: Homemade character from a 2012 Pathfinder campaign.