This was never the case of Paul Lorenze… but it could.

“The Beast” is the title of this 1951 story. Lorenze is not clearly called that in-text.

Paul Lorenze has all of the characteristics of a particularly aggressive and uninhibited gorilla, with peculiarly large fangs.

Even as a human, he had an unusual level of physical strength and behavioural intensity. 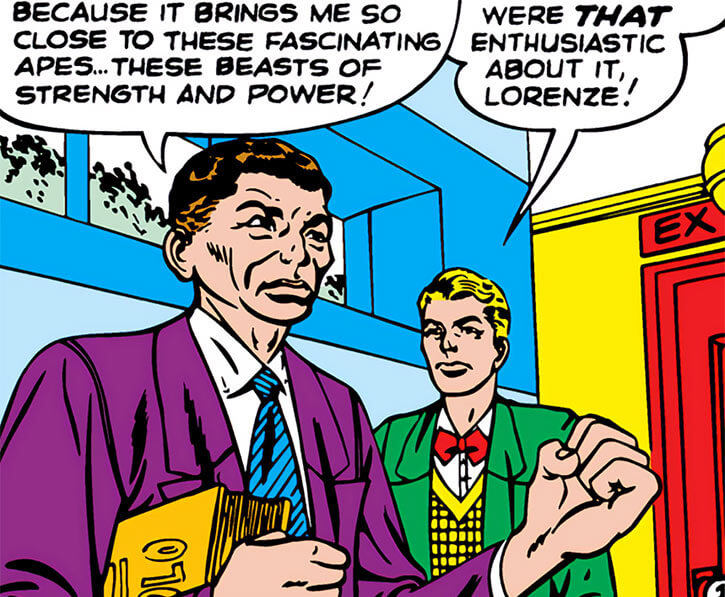 Back in 1951, Paul Lorenze was a deranged student fascinated by the power of evil… and by apes.

He considered apes to be perfect. In his view they possessed great strength and ferocity unhindered by the moral sophistication allegedly plaguing humans. For Lorenze, that made apes capable of true evil.

His dearest wish was to become an ape, and know strength unfettered by morals.

Lorenze was one of two students who were accidentally locked into a zoo at night.

There the pair stumbled upon another lunatic. Namely Professor Manheim, who had devised a serum to super-evolve apes into men.

Manheim was about to gun down the students who had witnessed his attempt to inject a gorilla. However, the weirdly charismatic Lorenze convinced him to devise an inverted variant of his serum. One that could turn a man into an ape.

(This being a 1951 story it is full of crass racism and terrible biology and zoology. It is also reminiscent of 1940s fare, such as the Golden Age Giganta). 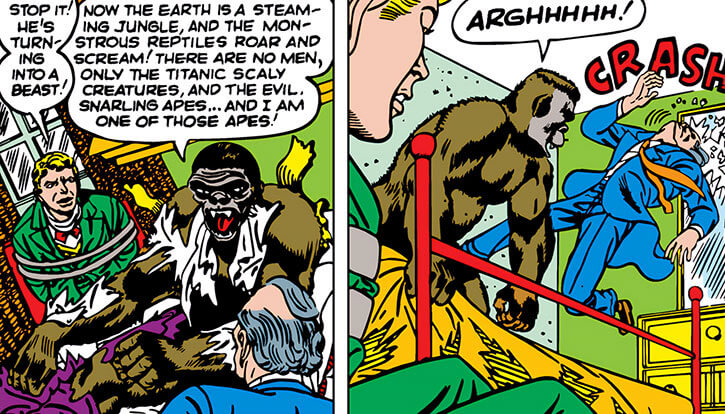 Kidnapping the other student, Manheim and Lorenze launched into a wild experiment. The process allowed Lorenze to reminisce past historical, then prehistorical incarnations.

As he went back in time before the appearance of the Homo genus, he physically turned into a savage ape-like creature. This primate killed Manheim with one blow.

(As you likely know, great apes were a fixture of this era’s comics. You could thus tie the revoltin’ development of Lorenze becoming an ape to other gorilla-centric stories. Such as the gorilla curse.)

Somehow, the zoo gorilla whom Manheim had wanted to experiment on then found Manheim’s house. It attacked.

The bestial Lorenze eventually prevailed. But the other student had freed himself and defenestratedThrowing someone out of a window. Lorenze from behind.

Handlers from the zoo, who were chasing the escaping gorilla, captured Lorenze instead. Somehow, they did not notice the difference. The bestial Lorenze thus ended up behind stout steel bars at the zoo.

Lorenze was a crazy dude fond of :

As a fully ape-like creature, he was apparently incapable of speech. It is unclear what level of intelligence he retained.

“It’s the apes I admire ! They’re powerful, vicious… and evil ! I like all evil things… and brute force ! Look at that big fellow there… his tiny, mad eyes, the snarling lips, the tremendous power… He’s the embodiment of all the wicked things in man !”

Lorenze as an ape

As per our usual approach, these stats model what he’s actually seen doing.

If you want him to have more DEX and the like, go right ahead. You could always reason that Lorenze wasn’t used to his new body yet when he fought that gorilla. 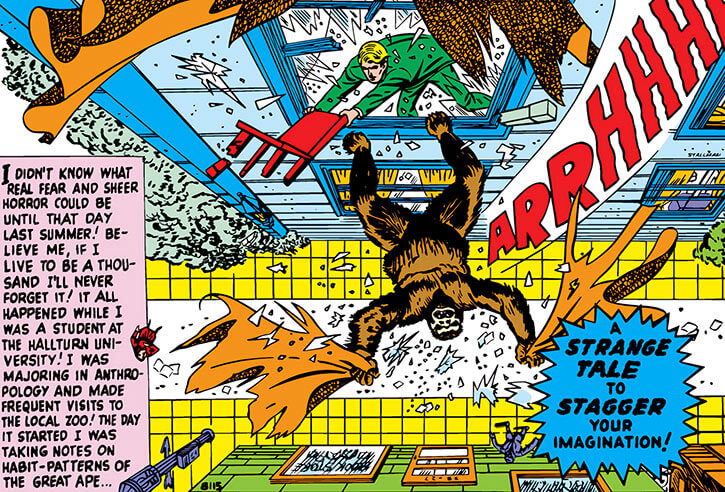 As per our usual approach, these stats model what he’s actually seen doing.

If you want him to have better Defenses, Offense and the like, go right ahead. You could always reason that Lorenze wasn’t used to his new body yet when he fought that gorilla.