Pavane is pretty good at her two main, and rather exotic, specialities. Those are :

She is in good physical shape, but does not appear to have any remarkable fighting skills beyond her mastery of the whip. For instance, she is not built for strength.

Though she’s not exceptionally charismatic, Pavane has a remarkable track record at having male opponents rescue her. She also excels at seducing strong-willed underworld leaders. She presumably achieves this through a strong mix of comeliness and sex appeal.

Pavane also was able to deceive her lover Velcro as to her true employer and mission, hinting at some talent toward subterfuge and acting.

Pavane is an animal trainer. She specialises in raising panthers that she trains to become watchcats and fighters. Two of the panthers have known names (Mara and Bidi), and all panthers trained by Pavane presumably receive a name.

The panthers are trained to work with certain handlers. These are normally guards whom Pavane trained to handle her beasts and are recognised by them. When patrolling with “their” human, Pavane-trained panthers wear a robust harness and leash so the handler can control them.

In Velcro’s original’s base, Pavane provided at least a dozen panthers as part of the extensive security forces.

Pavane is a mercenary.

She was first encountered as one of the security specialists employed by Carlton Velcro, a major player in the heroin trade. Velcro’s palace in the French Riviera had been turned into a fortress. It had numerous security systems both mundane and exotic, including a large number of Pavane’s panthers.

Eventually, Sir Nayland-Smith’s agents targeted Velcro, and stormed the palace. They managed to dodge or knock out the panthers. Though Pavane confronted Shang Chi she gravely underestimated him and was easily knocked out.

Before he left, Shang Chi carried the unconscious Pavane away from the fire that was raging through the estate.

Pavane escaped the disaster and went to work for Mordillo, the lunatic crime lord who had been her real boss all along. Apparently her mission with Velcro was actually to gain intelligence and to be a backdoor in his security.

Pavane implied that she had lost the fight against Shang Chi on purpose (yeah, right…). She also brought her boss some video footage of the assault on Velcro’s estate. 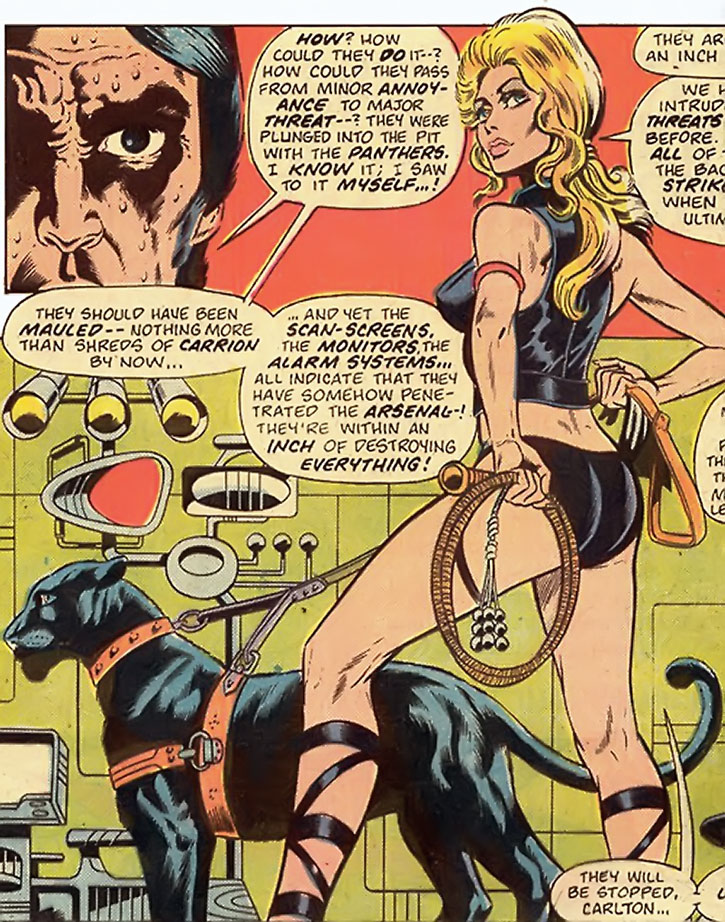 After Mordillo kidnapped Shang Chi’s lover, Leiko Wu, Nayland-Smith’s men came to Mordillo’s place, with predictable results. Pavane, along with a half-dozen muscular thugs, was sent to intercept Clive Reston, Black Jack Tarr and Leiko Wu on their way out.

Pavane engaged the (likely superior) Wu in close combat. But the fight was interrupted when the island came under orbital bombardment. Everybody had to run for their lives, with Pavane being grabbed by Reston and running to cover with him.

Pavane successfully escaped from Mordillo’s island, and started working for other underworld concerns.

She was hired by no less than the legendary Cat, a master thief and martial artist based in Hong Kong. Pavane was joined by another mercenary specialist – Skullcrusher.

When Shang Chi intervened in Cat’s current plot, their employer had them team up to dispose of the Master of Kung-Fu. At that point, Pavane had become the lover of Cat. Cat had just broken up with a torch singer named Juliette due to her romantic involvement with Shang-Chi.

Being jealous of Juliette, Pavane tracked her down. She viciously took her down, then brought the unconscious singer to the scene of the clash between Shang Chi and Skullcrusher to distract the former. The plan didn’t really work, though Juliette’s presence allowed Skullcrusher to flee after he was defeated. Pavane was knocked out and captured. Juliette’s life was also saved.

Pavane managed to escape from her bonds and ambush Shang Chi. Apparently, she resented him for having held back when fighting her during their previous clashes. Despite Shang holding back again, and despite the help of one of her panthers, the furious Pavane was again taken out by the master of kung fu.

The unconscious blonde was found by Skullcrusher, who was attracted toward her. Thus, she was safely brought back to Cat’s current base. Eventually, Cat and Juliette resumed their relationship and Pavane left.

The panther trainer retired from the mercenary life. She used her (no doubt ill-gotten !) wealth to buy a mansion and estate in the Surrey countryside. Her past inevitably caught up with her, however. Carlton Velcro was still alive, and had learned the truth about Pavane’s affiliation with Mordillo.

He sent the newest Razor-Fist to kill her. But British intelligence learned about it and Shang Chi and Leiko Wu decided to go warn her. Pavane refused to believe them, and was still spiteful about Shang preferring Leiko to her. That lasted until Razor-Fist killed several panthers on the estate and broke into her mansion.

Pavane eventually helped the two agents defeat Razor-Fist. She then confirmed that Velcro was still alive and what his whereabouts had been for the last few years. Pavane further agreed to deliver Razor-Fist to the authorities.

She has not been seen since.

She looks a bit like a young Jane Fonda on some panels.

But I suspect that the entire character springs from the 1973 For Your Pleasure Roxy Music album cover  , starring Amanda Lear  . Referencing rock albums was common in 1970s comics.

Apparently, one of her personal goals is sleeping with dangerous, psychotic international crime lords. Notches on her bedpost, I guess. She also seems happy to bed legendary master thieves and kung-fu grandmasters. 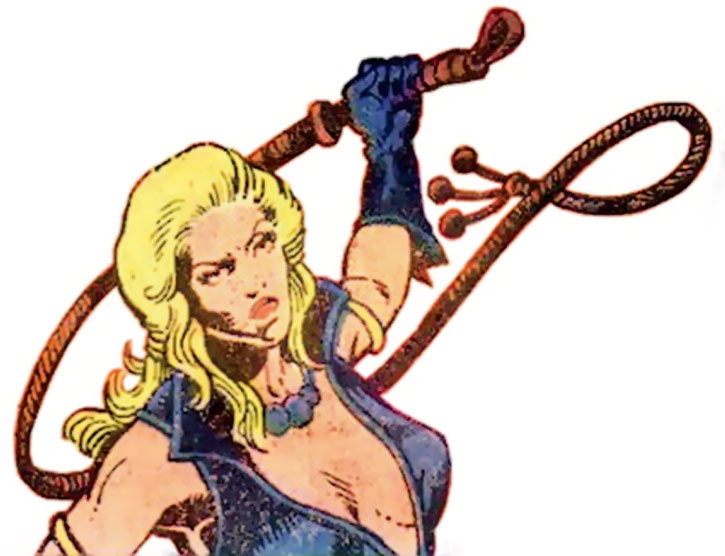 Pavane hates women with vaguely similar accomplishments in seduction. Even if said suspicions are based on remarkably flimsy information. Her mean, irrational jealous streak seems to extend to any woman who might be a romantic rival.

Pavane doesn’t like being underestimated. She will fight viciously and use Hero Points  if she feels thus patronised. Still, it would seem that she overestimates her own capabilities. Either she’s not as tough as she thinks she is, or she was very unlucky during her documented fights.

“And you must be… little Leiko… I understand that while I was with Velcro… you were with Mordillo… That alone is enough cause to me… to destroy your face.”

“Don’t think I’ve forgotten how you stole Mordillo from me, you little Asian witch !”

Like most Shang-Chi villains, the easiest is to make her into a League of Assassins member, or more generally a servant of Ra’s al Ghul.

Bonuses and Limitations:
Acrobatics (Athletics) is limited to facilitating balance and falls (-1).

Drawbacks:
MIA toward Jealousy and Pride. 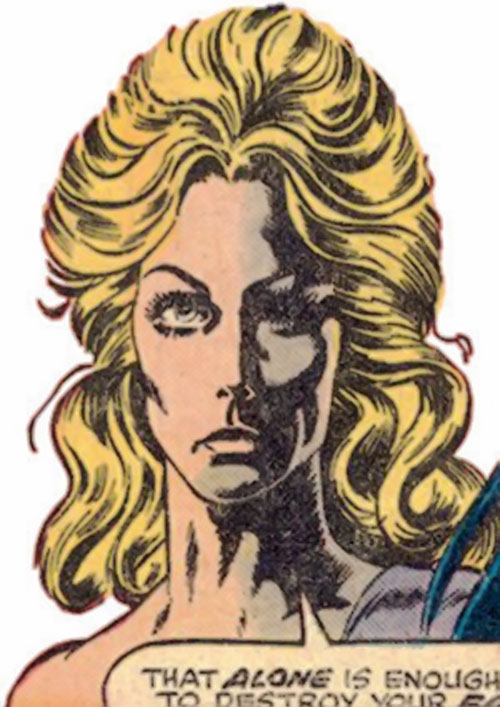 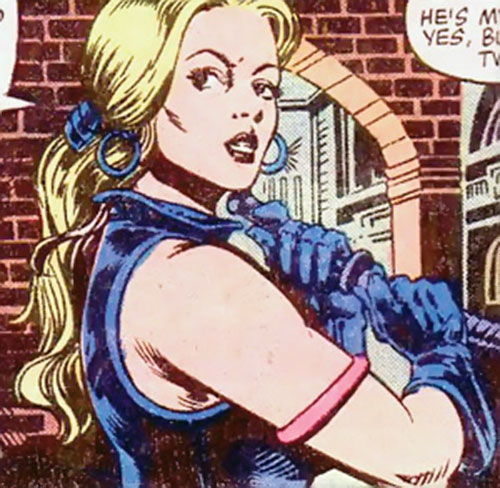 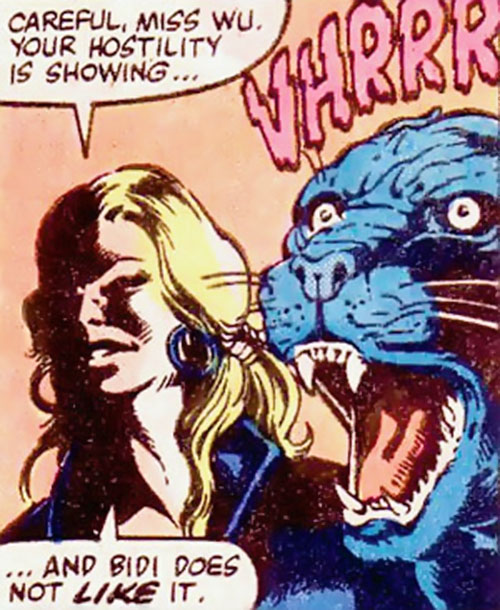 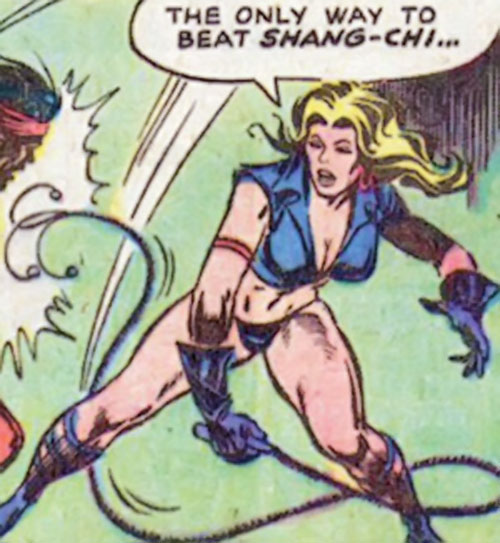