Married With Children was a satirical sitcom that ran from 1987 to 1997. The over-the-top humour about a crudely dysfunctional American family was relatively novel back then, and gave the series an eager following.

Peggy is the nagging wife, and mother of two. She’s the ultimate leech and couch potato !

Peggy Bundy’s foremost power is to be a do-nothing, Oprah -watching, bonbon-eating couch potato who, whenever she leaves the house, spends all of Al’s money on junk.

Not everyone could survive the destructive lifestyle that she has in good health.

Like all Bundies Peggy is a good scrapper, which always takes folks by surprise.

She is a very poor and prone-to-crash car driver, but has a surprisingly sexy and popular telephone voice. She used it for profit for a while under the nom de scène of ’Butter‘. She also knows dancing as she performed as a stripper named ’Jasmin’.

While her average on a Bowling game is a mere 60 she once bowled a perfect game (S04E19). Her bowling score therefore reflects an intermediate skill level for when the family goes bowling.

Oddly, she has a near superhuman ability to locate coins and banking notes by her sense of smell alone. This aids her in getting money from Al. Her ability is so well developed that she can even smell the denomination of bank notes – with the larger notes not recognized since Al has never had them!

Peggy Bundy is from Wanker County, Wisconsin, from where nothing good ever came out and where hillbillies roam. Wanker County used to be a swamp area purchased from the local Indians 200 years ago. The area was originally called: obi-luba-passu-vani ’land of the big gassy possum‘.

She was very “popular” in high school and had an enemy in Suzy Bender. The 2 of them were apparently the Kelly Bundys of their high school in constant competition of who could exploit the most men and attain the largest number of sexual partners before graduation. 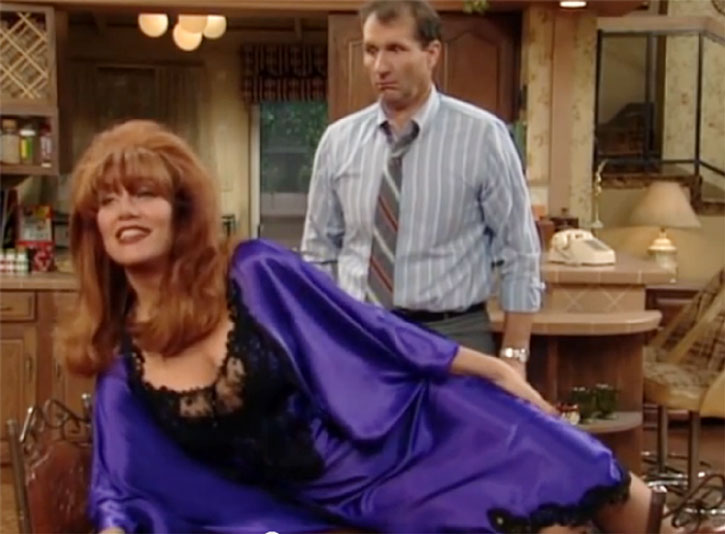 After High School, during which Al and Peggy were briefly dating, Peggy got pregnant with Kelly, on the same night as Al scored 4 touchdowns in one game at Polk High. Back then, Al had a “temporary” summer job as a shoe salesman. Peggy’s father, Efram, soon thereafter forced Al to marry Peggy at shotgun gunpoint while an uncle clubbed him down as he tried to escape.

So, eventually they got married after Al said “I do” (words that he has regretted many times). Soon thereafter Bud was also born. Peggy quickly adopted a lazy life as a spending housewife and has not worked since (except for a few short periods when she was forced to by various factors). The rest of the Bundy family’s antics is history!

As suggested by Ed O’Neill (Al Bundy) in an interview, the show should have ended with the Bundies finally winning the lottery after which they were demolished by a tornado during their celebration!

Peggy usually clothes in a 1960s style including the bouffant hair, tight capris-styled leggings paired with a large belt, and slip on heels.

Her hair has apparently grown in volume year by year.

She always walks with a swagger and is usually seen either on her couch, at the beauty parlor or in one of Chicago’s many shopping malls spending Al’s money.

Peggy Bundy is a lazy housewife. She is a chain-smoker and extremely vain. She spends a lot of time waching the telly on her sofa or talking on the phone (often expensively on long distance to her mother). 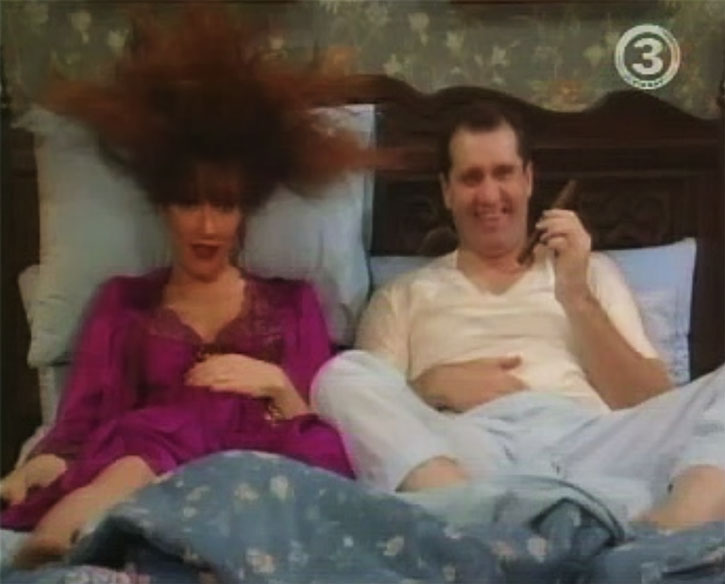 Peggy just loves to watch television – anything, which is why the television guide is frequently read and memorized! Her favorite shows are The Oprah Winfrey Show and “Psycho Mom ”. The remaining time is spent at the beauty parlor or shopping, a favorite past-time.

She has a joint credit card with Al which she uses frequently, very frequently. Shopping (including by the phone) actually makes her happy, even as she often buys expensive junk that nobody needs. She actually owns an extra rented storage facility for her purchased junk.

She refers to Al as her ’idiot husband‘ behind his back. While they do have their moments of closeness and love, Al, in his turn, usually refers to Peggy as the last of a dying breed – the Tyrannosaurus-do-nothingness.

Their relationship is actually very complex being a mixture of love, contempt, neediness, indifference and tradition. They have at least once loved each other (and still do so), and while they sometimes also appear to truly dislike one another, they do stick together through thick and thin.

Much like Al she too has got stuck in the personal growth area, but she never plans on leaving her husband for anything else, even if she may hint at it. 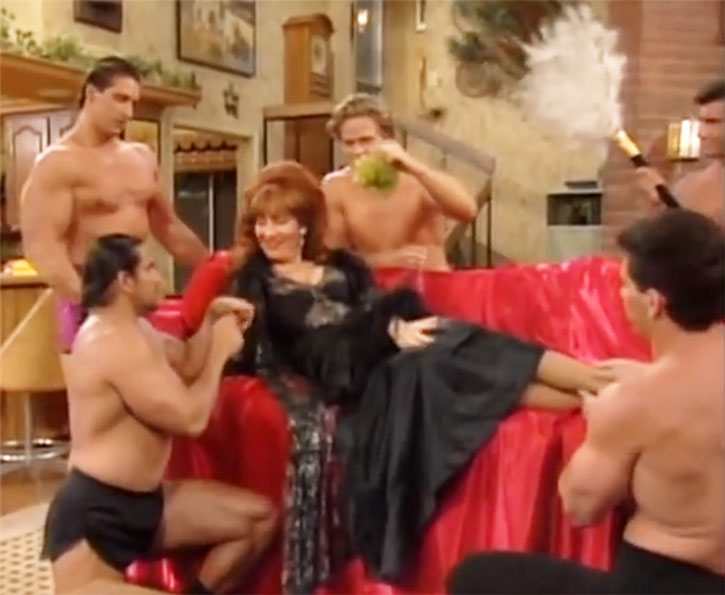 Since Al avoids sex with his wife every possible way Peggy is constantly sexually frustrated (and keeps a battery toy, named ’Otis’, for emergencies). But she does have some standards and will still shoot down unsuited suitors.

She actually worked as a stripper named Jasmin for a while and enjoyed the attention, and also successfully selling phone sex. Peggy, like Al, has actually shown very admirable fidelity towards monogamy with her husband (despite hard times and numerous temptations)!

Peggy has been shown to have a talent for cooking but she really hates doing it. For example, she cooked an excellent meal the day Al couldn’t eat due to botched dental surgery and another time (a rack of lamb) to finally pass her non-passed Home Economics class so that she could get her exam late.

She even cheated her own daughter on passing the same course since she didn’t want to cook again.

Another time she cooked delicious steaks to lure Al into having sex with her. This was not repeated due to her enormous hatred of cooking. Mostly, she attempts to avoid being asked to cook by voluntarily messing up the cooking the few times circumstances have forced her to do so.

However, Al really knows that she can cook well is she wants to. Just as she knows that Al can be good at sex when he wants to, which is very rarely).

Well, if Al had any money Peggy could and would be very good company!

Most of her dialogues (mostly nagging or arguments or discussions about the lack of sex or money) are with Al (as seen by the quotes). She also has friends at the beauty parlor (who actually are the wives of Al’s buddies in the No Ma’am organization).

They sometimes gather at her home for gossip, nagging and junk food. She is also quite good friends with her neighbor Marcy, with her being her second most common social partner after Al. The irony of Al and Marcy being bitter enemies is not missed by anyone.

The rest of the family

Like the other Bundys she does argue a lot with family members but she stands united with them against all outside threats. She always sides with her humongous mother as well, but then in Wanker County family relationships are very important.

While she does care for her son, Bud, and doesn’t want him to move from home, she also often ridicules him much to the enjoyment of the rest of the family. She also cares for her daughter, Kelly, but has mostly given up hope about her accomplishing anything but marrying rich.

Peggy’s birthday is April the 12th, a fact forgotten by everyone in her family, much like her wedding day.

Making do… on nothing !

Peggy adopted the ultimate lazy and leeching housewife style after Kelly and Bud were born. Peggy knows how to leech everything out of almost nothing. She spends with Al’s credit cards to the max without any guilt, eats out every day and watches TV all day long eating bonbons until Al arrives from work.

Once she shopped so much that Al qualified for a gold card (pretty amazing that given Al’s low income!).

She has very long and expensive telephone calls to her mother in Wisconsin and also frequently does tele-shopping, unless she shops personally after a visit to the beauty parlor. She spends most of her time watching television and eating bonbons. 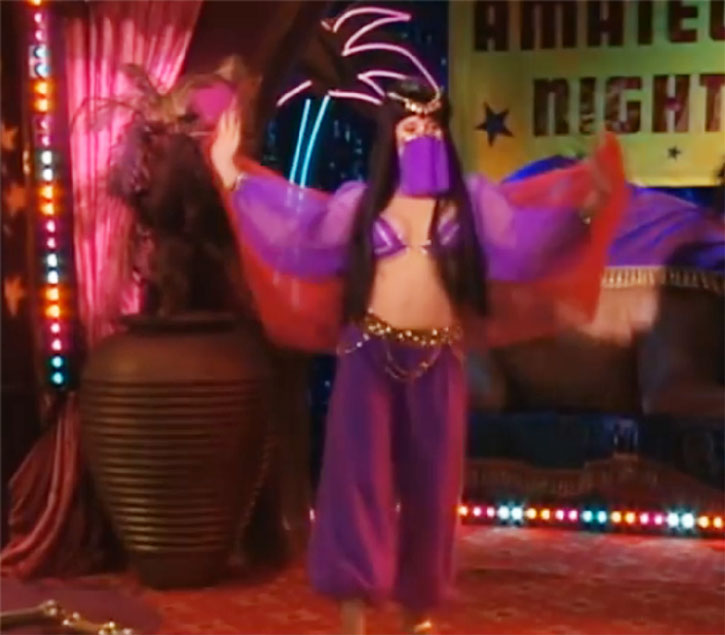 She likely eats out every day (the only one in the family to do so, except for Kelly who eats with dates) at a restaurant or junk food on the run. She never ever buys any groceries, and Al’s only chance of getting some food is if somebody orders him a pizza.

Al told her that a girl as beautiful as her would never have to work – and she took his word for it! So, in essence, while she doesn’t really have anything she has everything using Al’s resources, and she really loves this lifestyle!

(To Al) “And if you had what other men have, I wouldn’t need batteries anymore.”

“Al Bundy, this is all your fault. I should be in heaven right now having sex with young Elvis.”

“Come on, Al. It’s not like we’re really getting married. We’re just renewing our vows. Besides, dad’s got you covered.” [Peg’s father, Efrum, is pointing a loaded shotgun at Al]

“Al, you always do this. You get the slightest little injury and you get all whiny. You are like the last summer when you were changing the tires and the car fell on you. Oh, I really got a lot of sleep that night. ‘I can’t feel my legs ! I can’t feel my legs !‘. You’re such a baby sometimes. Now, now just go to sleep, some of us feel ok. Oh, I can’t sleep, honey. Rub my tushie.”

“Honey, how long do you think $12,000 is gonna last ? I mean we’ve only had that money for an hour and already it’s down to 10,000. And that’s just for hair, nails and $1,800 worth of junk. Now, honey, am I going to have to spend all of this money before you realize it’s time for you to get a new job ? But you know, it doesn’t have to be any job – it can be something you can be proud of. A step up. That’s why I’ve made an appointment for you. You see, there is an opening for a guy to separate garbage into paper, plastic and spit. Al, there is a lot of competition out there in the job pool. Why, everyday more and more illegal immigrants – some of them speak English – are out there flooding the job market. If you were a customer what would you rather hear: ’Yeah, yeah, I’ll get you a slushie…‘ or ’Please, sir, I’ll gladly serve you a slushie – thank you for not killing me !‘”

Well, Peggy got eaten by Al when he turned into a zombie – and there’s no coming back from that, or is there?

Advantages
Attractive (Toward self-destructive, lowbrow, none-too-bright blue collar males only), Familiarity (Oprah Winfrey Shows), Rich Family (Al Bundy; Al is not rich, but he is treated like one by her!).

Connections:
Marcy Rhodes/D’arcy (High), The other couch potatoes at the Beauty Saloon (High).

While being a housewife Peggy cannot clean anything and knows nothing about balancing a budget. Further, Peggy thinks that she has many APs of Artist (Singer), which she certainly doesn’t (although she has succeeded well singing Unskilled at least twice and failed miserably more times than that; the actress can sing though).

Additionally, she also thinks that she has the Attractive advantage, and while she is getting positive male responses at times, and for a while she even worked as a stripper with great success she probably doesn’t qualify for the in-game advantage (unlike Kelly). 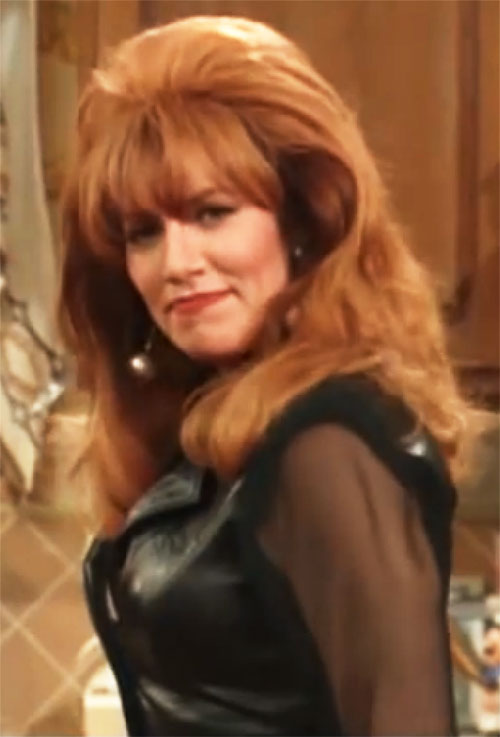 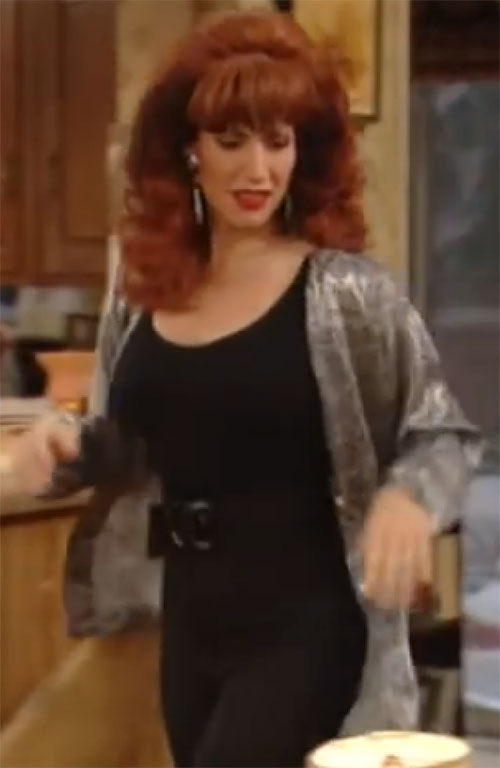 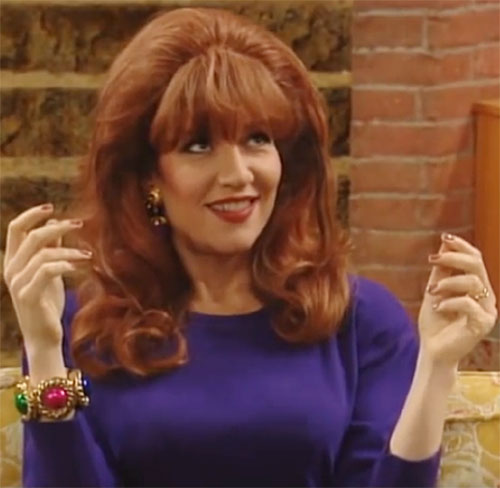 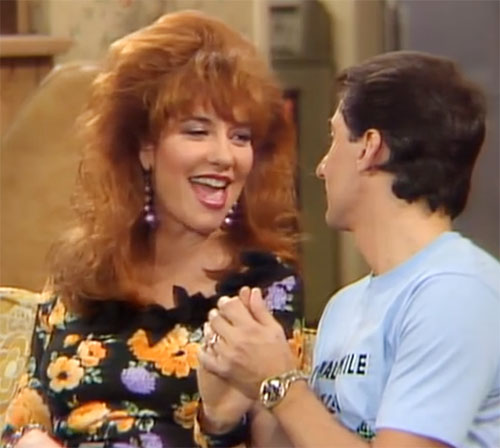 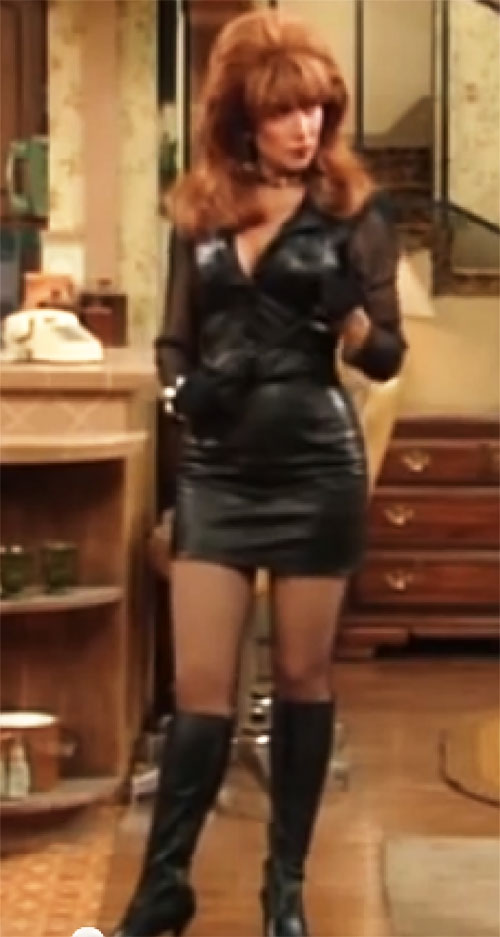 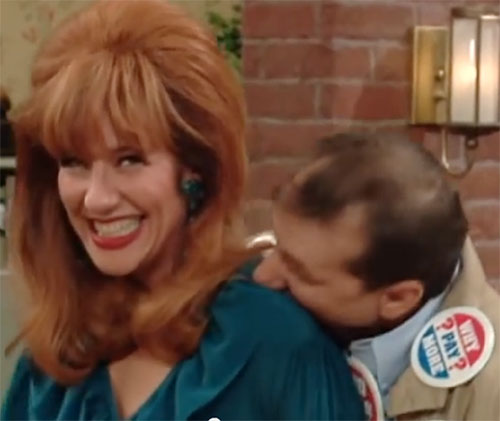 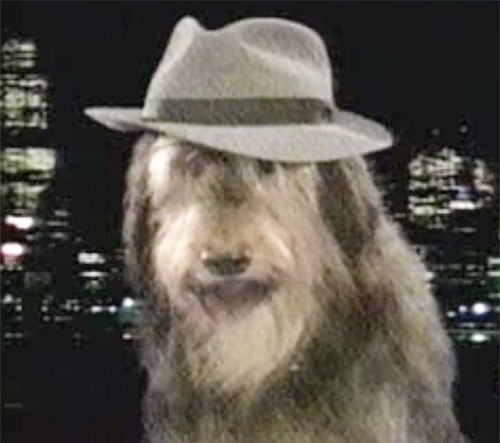