Penny Dreadful can absorb energy and release it as powerful blasts. Her body is not simply a conductor, though. It considerably enhances the power of the current that flows through her. She has claimed that this amplification was by a thousand-fold, but this is an exaggeration.

Still, she can easily generate dangerous bolts (in DC Heroes RPG terms two, possibly three APs) from a small battery-powered gadget such as a Walkman™ .

Penny eventually developed the ability to modulate her lightning discharges. This allowed her to lock the muscles of her target, making it very difficult to move. In DC Heroes RPG terms that’s Snare – she does not have enough power and control for Paralysis. However, sh emay have learned to enact a full paralysis since she was last seen.

The metallic disc over her chest is a giant American penny.

Helix members were raised outside of conventional morality. Until their late teens, they only knew about the world through television. They entered into contact with the world as rowdy teens, which led to considerable trouble and further sharpened their clan-like mentality. 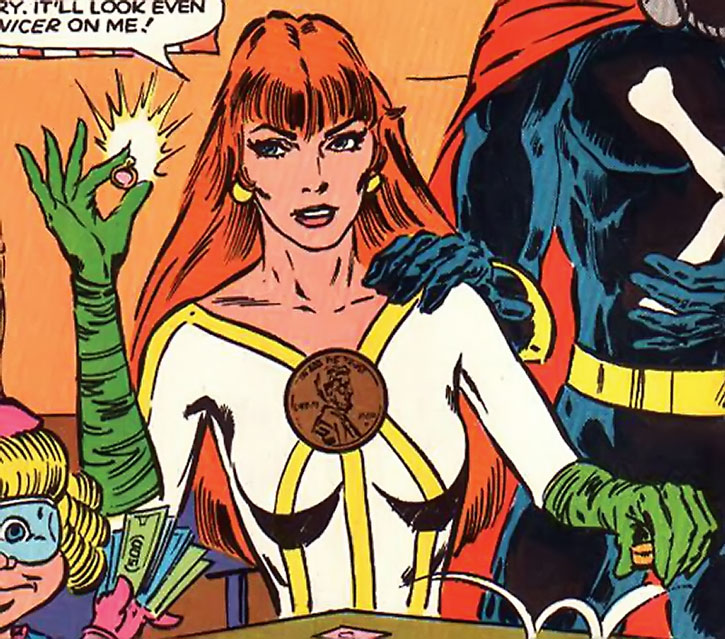 Penny Dreadful behaves as the oldest Helix member after Bones. She view him more as a peer than as a father figure. Like Bones she has a us-versus-the-world slant, and has grown to enjoy being a criminal and a thief.

She helps him maintain order among the turbulent Helix members. Like him she increasingly had to resort to physical intimidation (chiefly electrical shocks) to keep the brats in line for a while, but it sorted itself out. 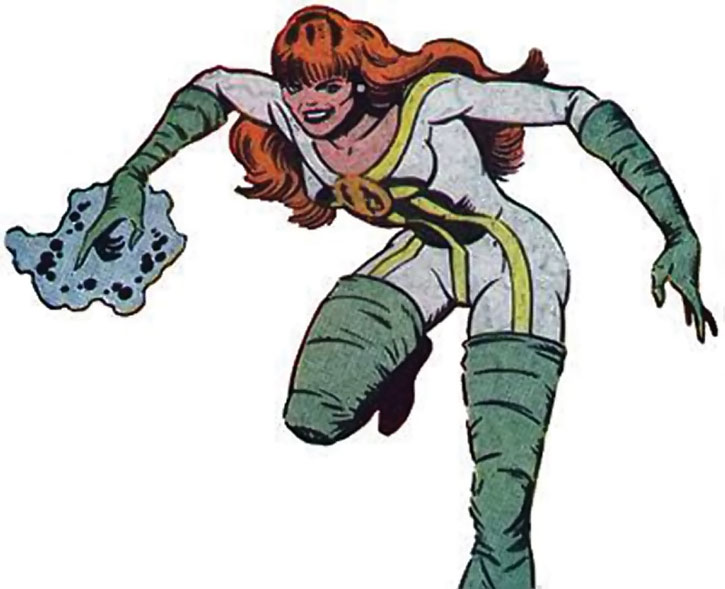 She normally comes across as stern and bossy. However, she also seems to be the most emotional member of Helix once she lets her guard down.

Penny seems to have a relationship with Mister Bones. Thus, she was the most affected by the various separations between Bones and the rest of the Helix “family”. She generally seems to be the most sentimental about the Helix “family”, and even regretted their decision to kill Dr. Love.

(Having stolen the Fury’s engagement ring) “Nice lookin’ rock, Fury. It’ll look even nicer on me !”

“The name’s Penny Dreadful, shades… and like any good copper penny, I make a damn good electrical conductor !”

“Pull in your claws, pussycat, and brace for a shock… and not the AC/DC kind that’s my speciality. Worse. You’re one of us ‘sociopathic freaks’.” 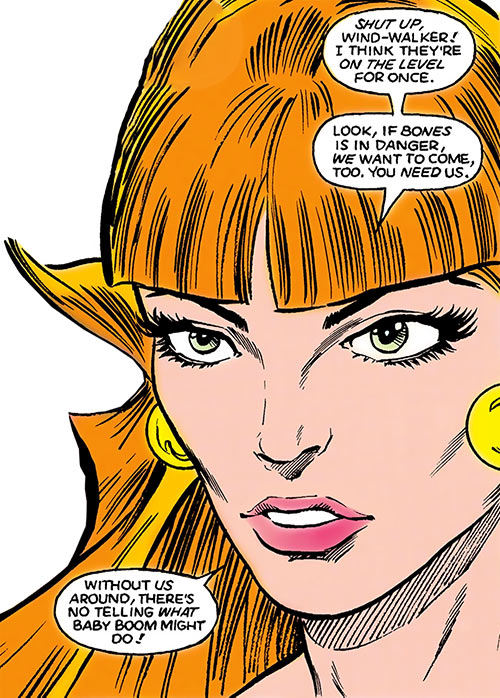