Perceptor was a baddie in the Bionic Six cartoon series. It ran from 1987 to 1989, and had a mix of American super-hero and Japanese super sentai aspects.

Although not really a fan of the series when it first aired (it looked too much like some Ninja Science Team Gatchaman/ Battle of the Planets rip-off) I did like the character of the Perceptor. Since I was a huge (Frank Miller’s) Daredevil fan, and the Perceptor was basically a bionicized version of Daredevil.

The Perceptor went through a similar, albeit earlier version of the same bionic process that gave the Bionic Six their powers. With his new bionicized body, the Perceptor possesses super human strength, speed, endurance and reaction time.

However, the bionic process which endowed the Perceptor with his fantastic abilities also permanently damaged his optical nerves.

His sense of hearing and touch were also greatly enhanced enabling to “see” and navigate through complex architectures, design and place IEDs (improvised explosive devices).

All in all, Perceptor proved able to take on the entire Bionic Six team on several occasions and escape capture for a time.

The Perceptor is a well-built Caucasian male in his mid-30s. He wears a dark, skin tight stealth suit and jet black customized motorcycle helmet with tinted visor.

The Perceptor is cunning and determined as an adversary. He prefers stealth and misdirection rather than direct frontal assaults.

He uses his tech savvy to sabotage enemy equipment and vehicles at their key weak points.

The Bionic Six functions better in their own self-contained universe. Still, they can be dropped into a near future version of Metropolis or Gotham were either Lexcorp or S.T.A.R. Labs has developed a bionic process to augment individuals.

Bonuses and Limitations:
Jumping has the Catfall bonus (+1).

Drawbacks:
Mistrust (early in career), Catastrophic Physical Restriction (Blind – note that it means that the Perceptor is not affected by numerous powers such as Flash, Fog, Darkness, etc.), Secret ID, Attack Vulnerability (sonic or any sound based attacks which disrupt his super enhanced hearing), Attack Vulnerability (-1 CS OV/RV, MIH towards technology which he blames for his blindness). 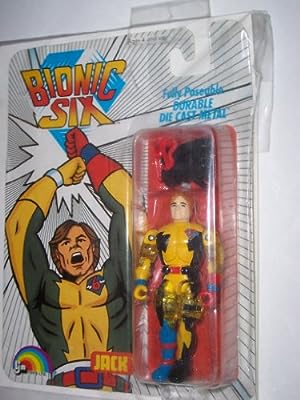