Batman: Mask of the Phantasm was a 1993 animated movie. It has the same talent (Bruce Timm, Kevin Conroy, Mark Hamill…) and the same stylised noir-ish aesthetics as the 1990s Batman animated series at its peak.

This feature was very well-reviewed and is a cult classic in super-hero animation.

This profile is loaded with S P O I L E R S.

The Phantasm is adept at various martial arts and weaponry. She also has access to various pieces of high-tech equipment, and is a master of illusion, particularly with artificial fog manipulation.

She is adept at leading her victims or opponents to believe she has paranormal abilities such as intangibility, invisibility, and possibly teleportation. Making use of her padded costume and voice synthesizers, she is capable of convincingly portraying a man.

Phantasm’s main weapon is a gauntlet scythe-type weapon that fits over the hand. It is sharp enough to slice through a quality handgun with next to no resistance. Given the kind of damage it does to unliving objects, it most probably could amputate limbs, or even behead someone if necessary. Phantasm seems to use it more for intimidation purposes.

Andrea Beaumont is the daughter of wealthy businessman Carl Beaumont and his deceased wife, Victoria. In her youth, while attending Gotham University, she met Bruce Wayne, and they fell in love. Bruce was torn between wanting to live with Andrea and keeping his promise to his murdered parents to fight crime.

He finally decided to abandon crime-fighting – instead pledging part of his inheritance to the Gotham City Police Department – so he could marry Andrea. As Bruce proposed to her at his estate, the two discovered the cave that would later become the Batcave.

However, Andrea was forced to break off the engagement and move to Europe when she learned that her father had double-crossed the Mafia. Carl had set up dummy corporations for some of the most powerful mob bosses in Gotham, including Chuckie Sol, Sal Valestra, and Buzz Bronski. When they learned that Beaumont had embezzled from them, they demanded immediate repayment.

Unable to quickly access the money he had stolen and subsequently invested, Carl fled with Andrea and eventually settled on the Mediterranean coast. By then, he had turned the money he’d stolen into a sizable fortune.

A few years later, however, when Beaumont’s father refused to make donations to Arthur Reeves, a candidate for City Council formerly a young lawyer in his employ, the young councilman sold information on the Beaumonts’ whereabouts to the mob.

Although Carl has repaid them, the vengeful gangsters wanted “interest compounded in blood”. Thus, they planned to use the information to have him killed. They sent a mob hitman, who would later become the Joker, to kill Carl. Andrea encountered him as he was leaving the scene, and discovered her murdered father only seconds afterward.

Consumed with hatred, Andrea patiently planned for years to destroy the men who ruined her life. When she returned to Gotham, she donned a costume reminiscent of the Grim Reaper, complete with a smoke-generating devices and scythe-bladed gauntlet.

Thus disguised, and mistaken by everyone as Batman, she killed Sol and Bronski.

After Bronski’s death, she revisited her mother’s grave. There she ran into Batman, who was investigating the crime-scene where the Phantasm killed Bronski. Shocked to see her after all these years, Batman quickly departed. But Andrea noticed that he was standing next to the grave of Bruce Wayne’s parents and deduced his true identity.

Batman later discovered the link between the mobsters and Carl Beaumont. He questioned Andrea, but she rebuffed him, revealing that she knew his secret.

When the Phantasm attempted to kill Valestra, she nearly fell into a trap laid by the Joker. Batman attempted to apprehend her as she fled from Valestra’s residence. But she easily evaded him and the police.

Andrea realized that the police were about to arrest Batman in her stead. She quickly changed out of her costume and helped him elude the authorities. In a final attempt to conceal her identity, Andrea told Bruce that the Phantasm was her father and that she has returned to stop his murderous rampage.

Andrea tracked the Joker to his hideout at the derelict Gotham World Fairgrounds. But the Clown Prince of Crime had already deduced her identity, and was ready for her attack. The two fought hand-to-hand in the “Home of the Future” exhibit. The Joker eventually lured Andrea into a giant wind turbine trap.

He attempted to kill her by sucking her into it, but Batman drove his Batcycle into the blades of the turbine seconds before the machine would have crushed her. Andrea attempted to justify her actions and asked him to let her carry out her vendetta without interference.

For once completely helpless, Batman begged her to leave. Neither agreeing nor disagreeing, Andrea disappeared in a cloud of smoke. After a battle between the Dark Knight and the Joker, Andrea reappeared to claim the defeated maniac. As the fairgrounds exploded due to the Joker’s fail-safes, Andrea bade farewell to her ex-lover, and disappeared with the Joker.

After escaping the inferno through a series of sewers, Batman assumed that Andrea and the Joker have perished in the blaze. However, she had survived (and as was later revealed, so did the Joker). Ms. beaumont left her locket for Bruce in the Batcave as a keepsake.

Andrea left Gotham on a cruise ship, alone and sorrowful for leaving Bruce.

The Phantasm reappeared as an assassin-for-hire in the “Epilogue” episode of Justice League Unlimited. Now an older woman, the Phantasm was hired by Amanda Waller to murder Terry McGinnis’ parents in front of his eyes. The psychological trauma, Waller reasoned, would steer Terry toward becoming Batman’s successor.

However, the Phantasm could not go through with the job. She abandoned it moments before she would have slain the young couple. The Phantasm argued that the murder would defile the Batman legacy by breaking Bruce’s paramount rule, to never take a life.

Her refusal marked the official end of Waller’s “Batman Beyond project”, only to have fate compel Terry to eventually become Wayne’s successor anyway. It seems that although Andrea had become an assassin, she would not, even after years of killing, take an innocent life.

In the episode, Andrea has no lines or voice actor. Her sentiments are conveyed through Waller’s monologue recounting the event. Her scythe-gauntlet in the future has glowing orange studs on it, suggesting some degree of technological overhaul.

The Phantasm in action.

Andrea is a tall, slim redheaded woman (much taller than I originally thought, comparing her to Bruce Wayne). She is elegant and refined, always wearing stylish clothes in the latest fashions.

The Phantasm looks more like the Ghost of Christmas Future. She sports a voluminous, tastefully shredded grey cloak, black body suit, grey boots and gloves, and a skull-like mask. An intimidatingly large scythe is mounted in the right gauntlet.

Andrea is humorous, somewhat acerbic in her joking, and tends toward sarcasm. She makes friends quickly, is sympathetic and a good listener (when not distracted). Since the death of her father, however, she is more withdrawn, serious, and tends toward melancholy.

Phantasm is a frightening specter of justice. “His” usual method of interacting with people is to scare the hell out of them, then kill them. Aside from that, he doesn’t seem to have much personality.

It is interesting that as Phantasm, Andrea is very nearly Batman’s equal, both mentally and physically. It seems that she is the Irene Adler  to Batman’s Sherlock Holmes.

Andrea Beaumont: “Hi. Hey, what happened to you ? Trip over some loose cash ? It’s been three days since we met and still no calls. I figured you must be dead or something.”
Bruce Wayne: “You expect every guy you meet to call you up ?”
Andrea: “The ones who are smart enough to dial a phone… What’s that you’re practicing ?”
Bruce: “Jujitsu.”
Andrea: “Gesundheit”
(Bruce glares)
Andrea: “… That was a joke.”

Phantasm: “Joker… Your Angel of Death awaits.”
Joker: “I’m impressed lady… You’re harder to kill than a cockroach on steroids.”
Phantasm: “So… You figured it out.” (pulls away cowl, revealing Andy’s face)
Joker: “Gotta hand it to you, nice scheme. Costume’s a bit theatrical, but hey, who am I to talk ?”
(Swings at Andy, she knees him in the crotch)

Batman: “Your father’s dead, isn’t he ? You came into town early to get Chuckie Sol, so you could shift the blame to your father if necessary.”
Andrea: “They took everything, Bruce. My father, my friends, my life, you. I’m not saying it’s right, or even sane but it’s all I have left ! So either help me, or get out of the way !”
Batman: “You know I can’t do that.”
Andrea: “Look what they did to us ! What we could have had ! They had to pay !”
Batman: “But Andy… what will vengeance solve ?”
Andrea: “If anyone knows the answer to that, Bruce, it’s you.”

Bruce: “I couldn’t save her, Alfred.”
Alfred: “I don’t think she wanted to be saved, Sir…Vengeance blackens the soul, Bruce. I’ve always feared that you would become that which you fought against. You walk the edge of that abyss every night. But you haven’t fallen in and I thank heaven for that. But Andrea fell into that pit years ago. And no one, not even you, could have pulled her back.”

A version of Phantasm already exists in the DCU, in the form of the Reaper, on whom Phantasm was based, but also in the Phantasm that was a disguise for Danny Chase of the Titans.

It would be a very interesting turn for The Titans Phantasm to actually have been Andrea, hiding out from Bruce in plain sight while maintaining her secrets and exacting Justice where she sees fit.

In the Marvel U, Phantasm should be a disguise for Gwen Stacy after she was supposedly killed by the Green Goblin. Thought to be dead, Gwen decided to seek vengeance on the Goblin herself while protecting her family from reprisals.

Or, perhaps since the tricks she uses are so similar to Mysterio, perhaps Andrea could be a close relative trying to atone for his misdeeds by using his own tricks to fight crime.

Note:
Councilman Reeves is directly responsible for Carl Beaumont’s death, since he sold out his location in exchange for campaign contributions. It is likely that Andrea didn’t know this, or he’d probably also have been on her hit list. As it is, he’d do pretty much anything for her if she asked, which makes him more than a bit creepy, since he *knows* what he did, but still wants to date Andi.

Phantasm isn’t just Andrea’s alter-ego, it’s a double layer of protection for herself, to throw off any suspicion that she’s the one killing those responsible for her father’s death.

Andi has made arrangements for anybody who investigates to think that it’s Carl Beaumont who is under Phantasm’s mask. This gambit was good enough to fool even Batman. The only one not taken in by it was the Joker, who, of course, knew it couldn’t be Carl because he had personally killed Carl himself.

Thus the seemingly redundant Secret I.D. and Dark Secret. If Andi is revealed as being Phantasm, she’s subject to at least three separate charges of first-degree murder, and is herself much less safe. Her targets will also be much harder to approach, knowing that she’s the one after them.

A lot of the numbers here are based on my own estimation of the Animated (Paul Dini) Batman’s abilities. Since there is no official or list-approved Animated Batman writeup, I made some assumptions based on my knowledge of the chr.

Mostly, I assumed that Animated Batman is around 1 CS lower in most things than the canon Batman.

Source of Character: Batman: Mask of the Phantasm movie, voiced by Dana Delany. 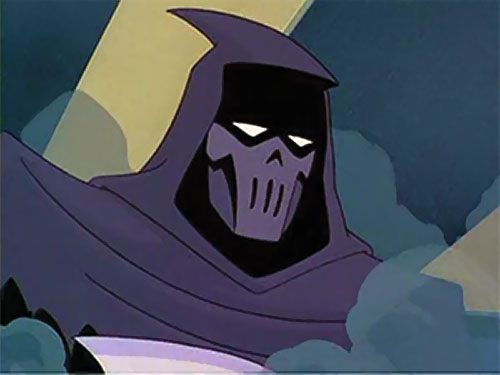 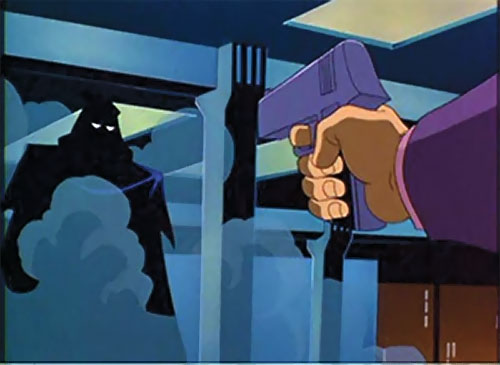 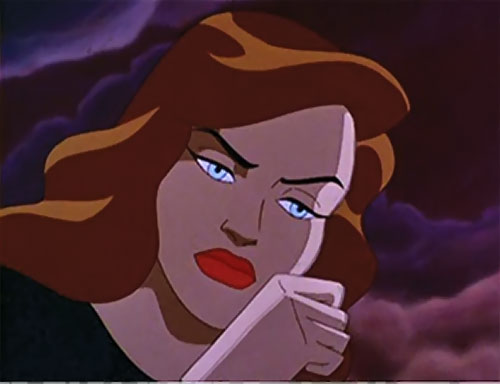 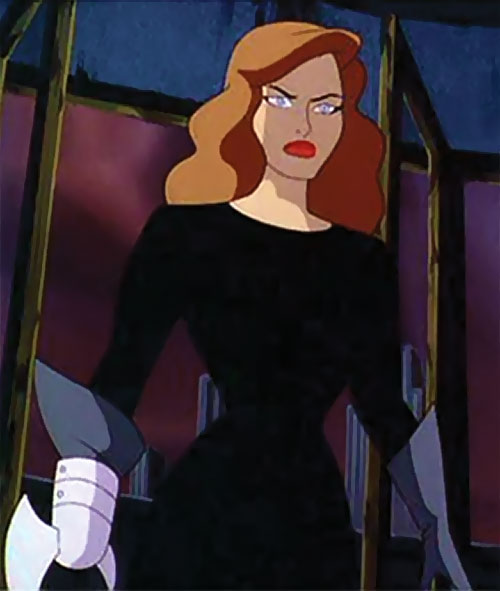 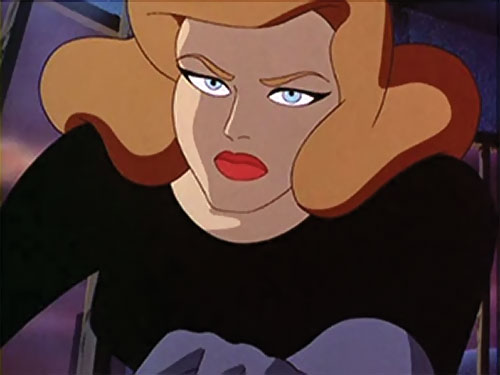 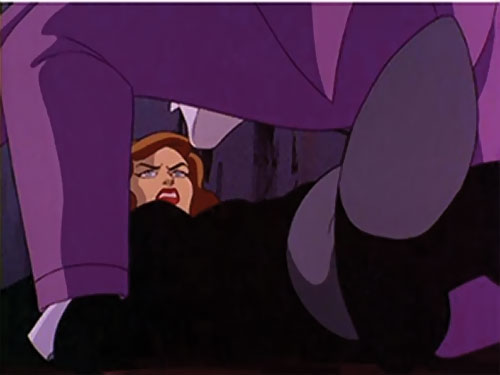 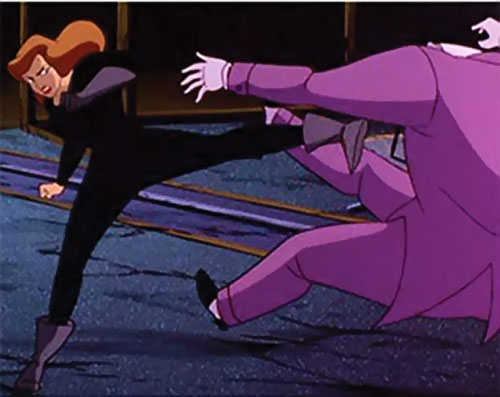 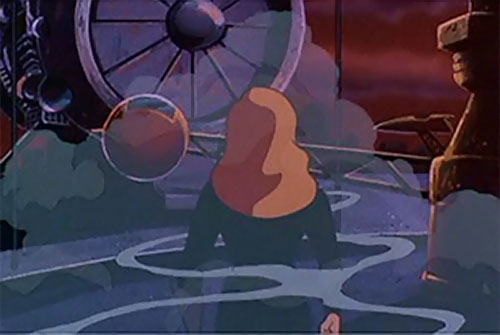 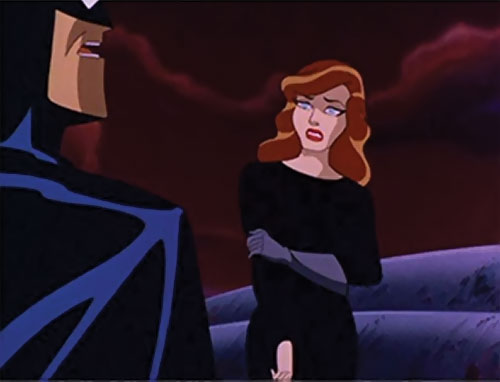 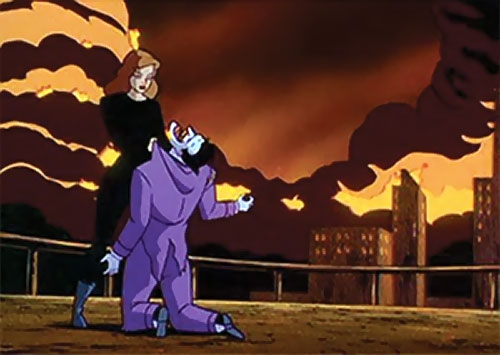 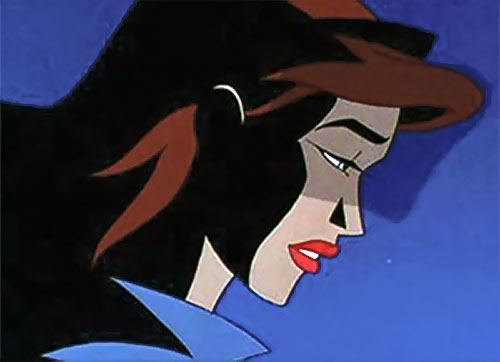 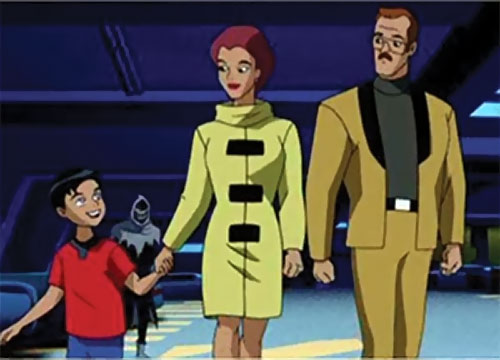 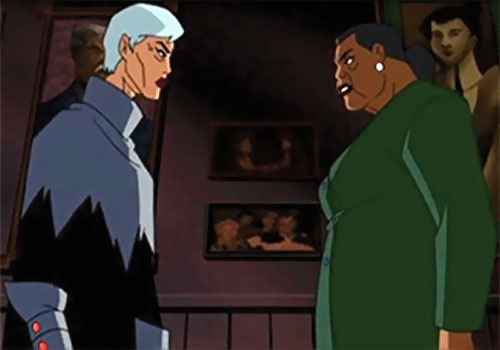