The Phantom of the 42nd Street seems supernatural, but it’s all a clever trick.

Jacques is an impressive strongman. He’s able to lift steel file cabinets above his head and throwing them at opponents with ease. However, his great strength and size mean he rarely has to fight for keeps.

Armand is a proficient acrobat despite his dwarfism, much like Puck. And he’s a smart bloke as well.

After World War One, the Times Square area in New York City boomed. It became an elegant, lucrative fixture of New York night life. The area boasted reputed theatres, music halls and the like. This lasted until the Great Depression ruined everything.

Even after World War Two, it was among the areas of New York City that failed to recover. By the 1960s, it had become a symbol of the urban decay of many NYC neighbourhoods. This squalor lasted for decades.

In the Marvel Universe, Adrian Loring and his partner Jasper Brunt were the moguls of Times Square during its heydays. They owned most theatres in the area, including the Gem Theater.

In 1972, the Gem was but a squalid, smelly shadow of its former splendour. But it was cheap enough for the Hero for Hire, Luke Cage, to rent an office within.

Adrian Loring had a son, Armand, who was born a dwarf. As a boy Armand, ashamed of his small stature, fled. Thus, it was soon forgotten by most Loring even had a son. Adrian, however, never gave up looking for Armand. But the youth had already made his way to Haïti.

There, he learned both kreyòl ayisyen — the French Creole  in Haïti — and acrobatics. He used his size and physical skills to become a thief. He was eventually caught, and thrown into the slammer. There, he befriended a fellow convict, an imposing Haitian powerhouse named Jacques.

Adrian Loring eventually got his young son (and Jacques) out of prison and back to New York City. But by that point, the theatre mogul was having a falling out with his partner Jasper Brunt. Loring correctly suspected Brunt of embezzling.

Adrian Loring gathered evidence. He hid these documents in the frame of a portrait of himself that hung within the Gem Theater. He also told his son. But when Adrian confronted Jasper the discussion went bad. Brunt shot Loring. He then set fire to the theatre they had been in, to cover his tracks.

Certain that Brunt had killed his father, Armand dedicated his life to ruining and then killing Brunt. Using his and Jacques’ talents, he designed the “Phantom of the 42nd street” identity. It was a seemingly supernatural, eight-foot tall, impossibly strong creature. Its face was the ravaged, burned visage of Adrian Loring.

The Phantom got to work in an efficient manner. Soon, the theatre-goers in Times Square steered well clear of 42nd Street, being terrified of the Phantom there. A placard-bearing, deranged homeless man claimed that the Phantom was the result of the sins committed in Times Square, and was the herald of Judgement Day.

The Phantom of the 42nd Street announced his plan to Brunt. He then invaded the Gem Theater to find the portrait of Adrian and the papers within. The portrait, however, was kept very near Cage’s bedroom. Thus, the Phantom discovered that overcoming the Hero for Hire was impossible. Yet he easily fled, leaving Cage half-convinced that the Phantom was an actual ghost.

Jacques, who had hurt his hand hitting Cage, had to be persuaded by Armand to see a doctor. He was treated at Temple’s and Bernstein’s free clinic. The strongman threw a brief yet destructive tantrum when Bernstein made his bandage too tight. Seeing Jacques’ strength and his wound, Cage came to suspect the truth.

The Phantom entered the Gem Theater again, still after the portrait. But Cage gave chase, knocking Jacques out. Armand managed to stagger the Hero for Hire into live wires, leaving Cage muscle-locked from electricity.

With Jacques out of the picture for now, the Phantom trick was unfeasible. As a result, Armand decided to shoot Brunt dead ahead of schedule.

Having realised the importance of the portrait, Cage and his buddy DW found the documents inside. Thus, they learned the whole sordid story. Cage then raced to Brunt’s place. It was actually Loring’s life that Luke saved, as Brunt had gotten the drop on Armand and nearly shot him.

Luke told Armand that Adrian Loring had willed his entire fortune to his son. Loring briefly hesitated upon learning that he was now a rich man, but chose vengeance anyway. Loring leapt on Brunt and both went through a window, falling to their death.

Jacques was rushed to a hospital, but presumably recovered from his wounds.

Armand is bitter and obsessed with revenge. But he’s also smart, quick on his feet and articulate. In many way he acts like a noble avenger, a sort of Count of Monte-Cristo .

Jacques is his best friend. If they’re not in an area where folks speak Haitian French Creole, Armand will translate everything for his buddy.

Jacques seems to be a simple guy from a dirt-poor place. An incompetent doctor once made him suffer terribly. Thus, he now distrusts physicians so much he has to be persuaded to seek treatment. If anything goes wrong with a doctor, he’s liable to get physically violent. But in other circumstances, he seems to be a peaceful bloke.

Equipment:
PHANTOM BODY SUIT [BODY 02, Enhance (Thief (Stealth)): 02 (Cap is 06), Limitation: Enhance only works in a dark place, and Jacques must first dispose of the cloak, which glows in the dark].

Fighting duo ● 1 point ● Descriptor: Skill
Close Attack 3 and Move-by Action (Limited 2 – only when teamed up with Jacques, only for Team Attacks Manoeuvres)

Fighting duo ● 1 point ● Descriptor: Skill
Close Attack 3 and Power Attack (Limited 2 – only when teamed up with Armand, only for Team Attacks Manoeuvres). 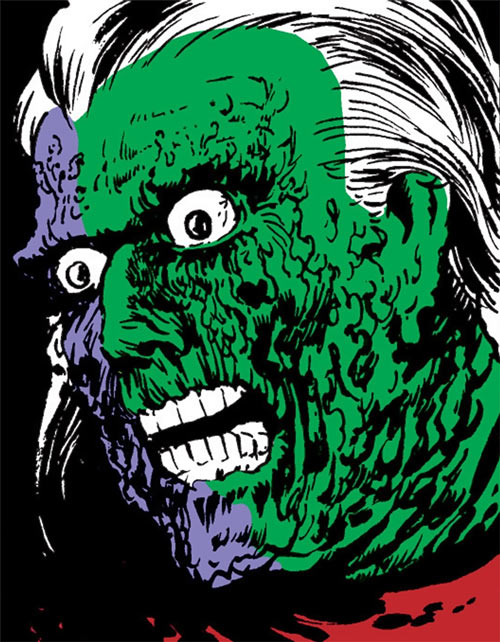 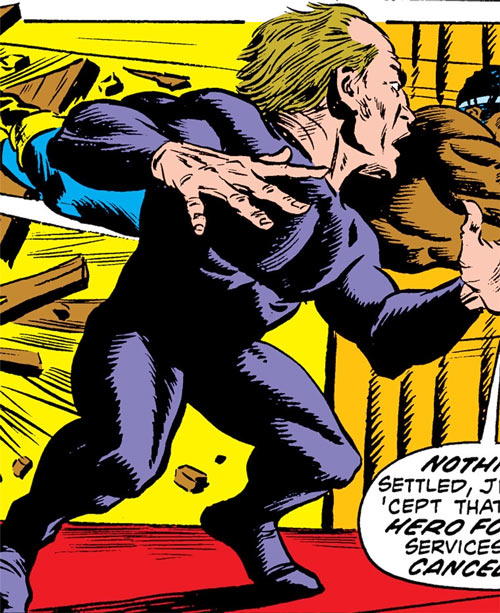