Quotes about the Phantom

“The Phantom is tough against the tough.”

“There are opportunities when the Phantom leaves the jungles and walks the city streets like an ordinary man.”

“The Phantom’s rage even makes the tiger tremble.”

“The Phantom moves faster than the lightning.”

“The Phantom has the strength of ten tigers.”

“The Phantom never misses the target.”

“The raging Phantom is a terrible sight.”

“When the Phantom speaks you listen.”

“Never aim at the Phantom.”

The Phantom is a powerful fighting machine. He was intensively trained in all armed and unarmed disciples since his birth. He is extremely strong, nearly inhumanly so, and physically very tough. An opponent might break his knuckles against him. He has a near superhuman endurance, durability and balance.

He is a master of acrobatics, the martial arts, the technique of stealth and the use of practically any weapon. He also possesses a trained mind with a wide variety of skills including detective skills, medical skills and military skills.

Furthermore he trains animals to become his pets, rides, hunts and generally communicates with animals on an uncanny level.

The most fearsome abilities of the Phantom are his physical combat skills, his mastery of revolvers (with whom he shoots the guns out of his opponents hands, disarming them) and his terrible ability to interrogate and intimidate.

The Legend (as told by the Pygmee Tribes)

One night when the light of the moon was reflected from the surface of the sea the ghost who walks rose up from the sea {blah blah} and that is now over 400 years ago ! {blah blah} And ever since the Phantom has fought evil and been the friend of all the jungle people. A very long time ago the coast of Bengali was a habitat of pirates {blah blah}…

400 years ago a sailor named Kit Christopher Walker sailed with his merchant father along the coast of the Bengali Jungles. The ship was suddenly attacked and sunk by a group of merciless pirates and Walker was the only surviving crewman.

He was washed ashore the Bengal Coast and taken care of by a friendly pygmee tribe living in the area. When he was well again he swore an oath, filled with rage, at the skull of his father’s killer. He swore to use the rest of his life to fight piracy, cruelty and injustice and that all his descendants would follow him !

The pygmee tribe had a legend about a man who would come from the sea to liberate their people from oppressors. They took him to a mysterious cave formed like a skull and hidden behind a water fall in the jungles. This cave became the residence for the man who now called himself “The Avenger”. 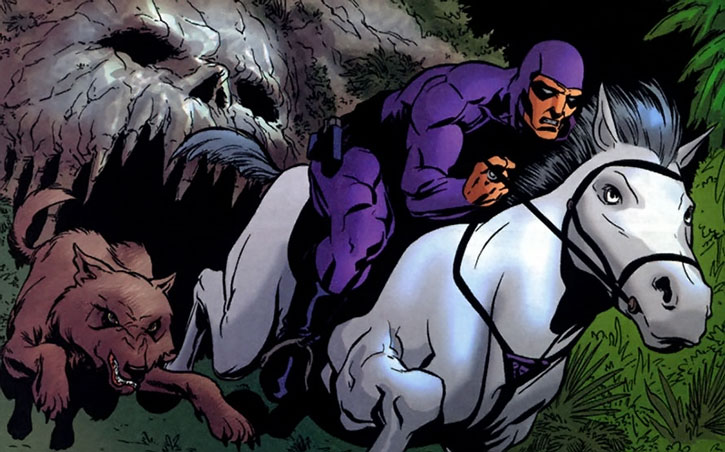 The Avenger met with failure in the beginning due to lack of any real physical training. But this was taken care of by several months of training in all physical disciplines in the jungle. He defeated and drove away all oppressors. He defeated many pirates and criminals around the area as well as in other parts of the world.

During the last years of his career he was dubbed “The Phantom” by the local people as well as criminals. At some point he got a son, whom he named Kit Christopher Walker, just like himself and his father. This son was trained to become the next Phantom since his birth. The son continued the work as has every first son done ever since.

When a Phantom becomes mortally wounded he travels to the Skull Cave. At that point the message, transmitted with the drums across the jungles, tell that the Phantom is dying. In the cave the son, who has been summoned, buries the father and swears the oath of the Phantom.

Thereafter he puts on the Phantom’s suit and goes out to the waiting pygmees who immediately send out the message that the Phantom lives.

Over several hundred years the wealth of the Phantom has increased. The cave now is filled with incredible treasures such as the Diamond Cup of Alexander, the snake that killed Cleopatra, ordinary gold and much more.

The Phantom’s reputation has increased to an extreme level and generally it is believed that it is the same man, the man who cannot die, The Phantom, who is the legendary avenger from the dark Bengali Jungles.

The current Phantom is counted as number 21 in the series by those who know the truth. The adventures of the Phantom are too numerous to tell, but it should be said that they include :

Physically The Phantom is looking quite muscular and tough. And yet his real level of strength does not show through. He looks slender and well trained. Although he is not exceedingly handsome or attractive, women tend to like him extremely much. He’s a dark mysterious stranger.

He is always clad in the Phantom suit. It consists out of a full body stocking, covering everything except his hands and face, in gray or blue. He also wears a pair of leather boots and pants outside his trousers (à la standard superhero) in striped red and black.

Fixed to the pants is a black leather belt with a pair of holstered revolvers. Lastly covering his eyes is a domino mask (à la Robin) in black with the eyeballs in white.

The whole appearance is that of a ghost (in darkness) or a character from a masquerade (in daylight). While visiting a city the Phantom wears suitable clothing covering his identity. During the wild west days, as an example, he did wear a typical cowboy suit while traveling in the states.

While visiting a city the current Phantom always wears a long trenchcoat and broadhat in brown colors above his suit to protect his identity, while calling himself Mr. Walker.

The Phantom is an unique mixture of a real good guy and an ultra tough vigilante. He never kills and would attempt to save anyone, both friend and foe. He deeply cares about the well-being of people, his animal friends and the world.

But whenever dealing with anyone he is utterly persuasive and frightening. He doesn’t even have to bluff to get results. It will suffice to stare at the victim and command him with whatever is appropriate.

He appears to be something supernatural to people he tries to affect, but to friends he appears to be the greatest of good guys. He deeply honors the wishes of his deceased ancestors as well as the legends. In the cities, while gathering information in the bars, he usually orders a drink of milk, which undoubtedly gets him into a fight with the local thugs.

The Phantom doesn’t believe in supernatural forces although he has met several.

The Phantom relies on psychological factors such as superstition and surprise against criminal elements. He mostly uses stealth to go totally unnoticed. He is totally incorruptible, has a strong belief in his work and is generally a powerful spirit. Don’t try to manipulate or order him around because you’ll be the one who manipulated in the end!

Sure, throw him in ! There is not too much happening in the Bengali Jungles of the DC Universe so he will fit right in as an urban myth. He is usable both in superhero and occult genres and could be a character working behind the scenes solving the same crime as the player characters who’ll only hear about him through rumors.

Pets:
Devil is a wolf who the Phantom trained since it was a puppy. It has shown tremendous intelligence and strength and is completely loyal to the Phantom. Its stats can be considered to be those of a normal wolf but with +2 on DEX and +1 on BODY, INT, WIL, INF and SPI respectively.

Hero is a great horse whom the Phantom won from a prince in a competition many years ago. Its stats can be considered to be those of a normal horse with +2 on DEX and +1 on BODY, INT and SPI respectively.

Whenever the hero’s name is spoken aloud an Intimidation check is made against anyone with a Villainous Motivation who happens to be within earshot. Standard Multi-Attack Penalties apply (or don’t..you’re the GM after all). A villainous character with this advantage has a similar effect on anyone with a Heroic Motivation.

Misc. Advantage : The Curse of The Phantom

This particularly nasty advantage is lethal to any opponent of the Phantom. Whenever an opponent has accidentally or on purpose seen his unmasked face the opponent is doomed to die a horrible death.

Treat this as granting the opponent the Unluck Drawback and the ’Dumb Luck‘ power at 7 APs (The Phantom’s AURA) with the limitation that it can only bring terrible misfortune on the wearer. All gained RAPs on such rolls are added to the AV or EV of any and all attacks directed against the wearer and soon enough the wearer shall unavoidably die. 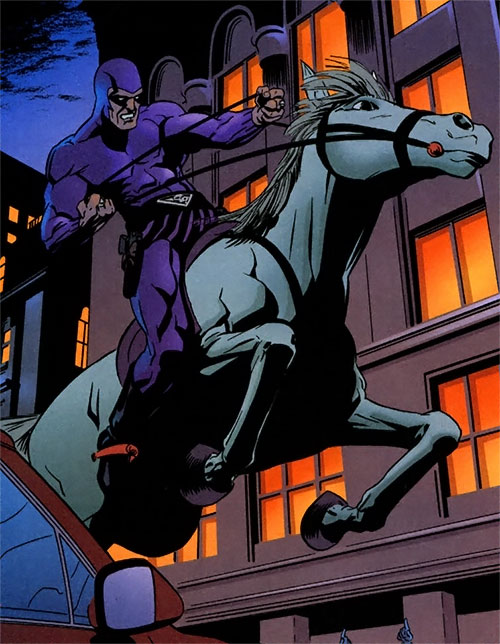 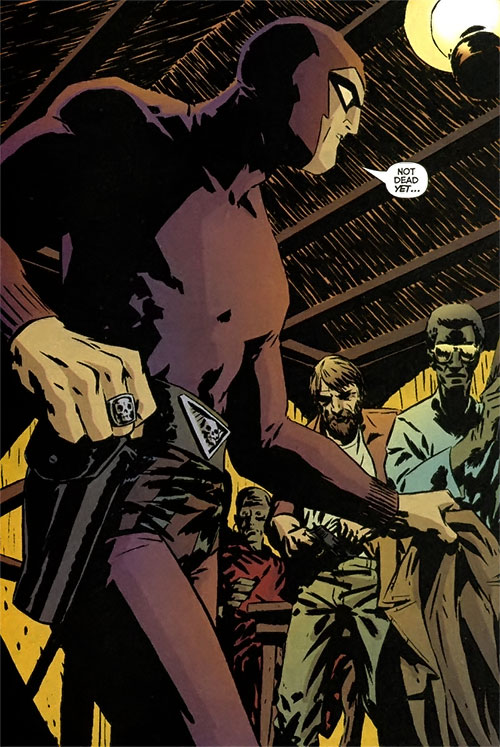 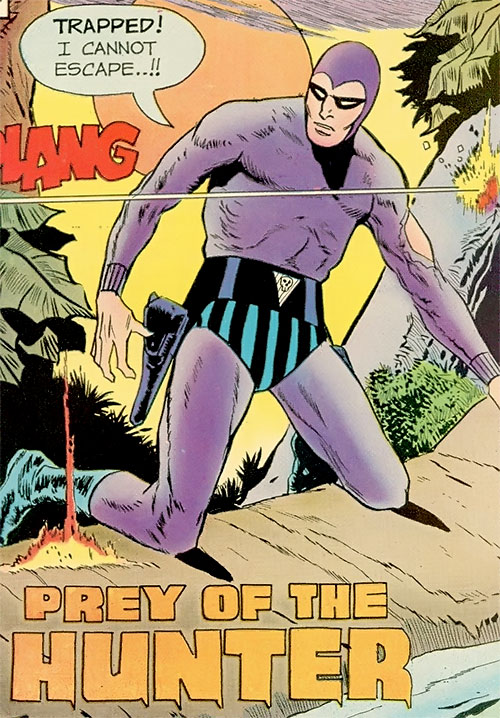