The Phantom Zone is a Superman story element that first appeared in 1961. Over the decades it became part of the mythology, particularly after it showed up in Superman movies.

It is a sort of limbo  where terrible criminals are exiled for, well, eternal torture.

To this hell were sent Krypton’s greatest criminals, as punishment, for a duration commensurate with his/her offense. In the Phantom Zone one is a wraith, unable to affect the material world in any manner. Once in the zone, a person feels no hunger, requires no sleep, no air and does not age. There is only time to think and feel. The exact number of criminals present in the zone, Phantom Zoners, is not known. The Phantom Zoners have developed a great hatred toward Superman of Earth, the son of Jor-El. This is because he represents the survival of the culture which imprisoned them. And because he is the son of the scientist who crafted their imprisonment.

A history of valor

The zone also contains the hero Mon-El, a native of Daxam. He came to Earth, but contracted an incurable form of lead poisoning. Therefore he was projected into the zone, where the disease was suspended until a cure could be found.

Mon-El was to remain in the zone for ten long centuries before Brainiac 5 of the Legion of Super-Heroes in the 30th century developed a serum that would cure him. Upon his release Mon-El was made a full-fledged member of the Legion. Using a series of devices of his own invention, Superman, hero of Earth and son of Jor-El, is able to communicate with, and monitor, the denizens of the Zone. His “Zone-ophone” also allows him to observe the criminals. With the view-finder he is able to pinpoint any and all of the exiles.

The dimension of the Phantom Zone is clearly infamously difficult to travel to and from. In game terms it Travel Value is 10 APs, which is quite a lot. As has been mentioned the real world can be dimly perceived from the Phantom Zone which is done through a Perception Check against an OV/RV of 03/03.

Furthermore, as a wraith a character can travel anywhere in the Phantom Zone at a Speed of 38 APs. Since communication in the zone is mental, all Phantom Zoners acquire 12 APs of Telepathy once they enter the Zone.

It seems, although Physical attacks are impossible, that Phantom Zoners can make Mental and Mystical attacks on another Phantom Zoner affecting his/her INT/MIND or INFL/SPIRIT. These attacks may be felt by the victim as actual physical impacts, as a Character’s perceptions are altered by the twisted realities of the Phantom Zone. But damage is applied to the appropriate Attributes.

Phantom Zoners can also attempt to mentally assault and take over the minds of Kryptonians outside the Zone who are particularly weak-willed, ill, or suffering from amnesia. Such an attack is treated as a use of the Control Power.

It can only work on a Kryptonian of weakened mental status (GM’s discretion). Furthermore, there is a +4 CS to the victim’s OV/RV due to the different dimensions. Team Attacks may be made normally.

Also, through the power of Jewel Kryptonite the Phantom Zoners can use their mental forces to alter and affect things outside the Zone. Jewel Kryptonite is a material created by Jax-Ur, by making a roll with the character’s INT/MIND as the AV/EV and 04/04 as the OV/RV.

The RAPs can be used as APs of Control, Hypnotism, Illusion, Mental Blast, or Mind Blast. The character does not have to have these Powers already. These can be directed at anyone within 20 APs of the Jewel Kryptonite, outside the zone. A new roll must be made once per day to determine if the available APs change. Multiple Zoners can attempt to use the Jewel Kryptonite to generate APs while using the normal bonuses for a Multi-Attack. Although the zoners can Mental or Mind blast opponents with the Jewel Kryptonite (and will, as a last resort), they prefer to use the substance to gain some more subtle advantage. Something building toward their escape, the death of Superman, or some other objective.

The Phantom Zoners are sure to keep an eye on any such escape opportunities at all times.

Getting in, getting out

There are exactly three known means of going into or out of the zone: What exactly is the Aethyr? Ages and ages ago, two spiral galaxies, each rich with hundreds of thousands of life-bearing planets collided. Almost all of these planets perished from the resulting tidal forces.

The billions and billions of minds of the planets’ inhabitants – their very will to survive – lived on as the being called Aethyr. To further insulate and protect itself, Aethyr willed itself into an other-dimensional universe; the Phantom Zone is the outermost layer of this universe.

Aethyr created multiple other-dimensional layers which bounded both the limbo of the Phantom Zone and the outer reality. There realities shift constantly, as they exist at the whim of Aethyr.

(Ed. note: this is of course comic book astronomy. In the real universe, there is so much space between the celestial bodies in a galaxy that two galaxies colliding is a non-event, though they might swap some stars.)

Of the Kryptonians imprisoned in the Phantom Zone, only three have attempted to pass through the dimensions of Aethyr on their own. These were Thul-Kar, a priest of Joru, who entered the zone magically on Krypton’s last day, as well as Superman and Quex-Ul (as seen in the series The Phantom Zone). 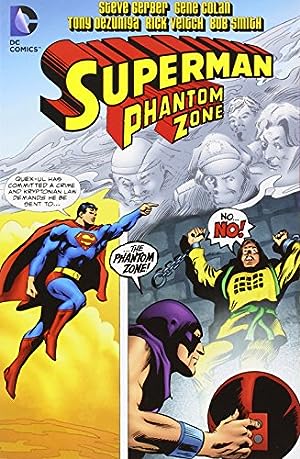