This obscure, 1948 baddie is probably the best-known opponent of Namora during the Golden AgeSuper-hero comics from the late 1930s to the early 1950s.

Which, admittedly is… not saying much.

Tut-Ak-Mun was an ordinary guy. Still, he seemed to be a good shape and was a decent equestrian and — possibly — spearman.

His thing was a magic ring. Which, when told a key phrase, reanimated squads of undead soldiers serving him unquestioningly.

Tut-Ak-Mun’s main asset is a group of undead Ancient Egyptians. Those seem to be mummified shock troopers. They were enchanted to reanimate to follow the commands of a descendant of the pharaohs.

One sentence implies that these elite soldiers were minor nobles. It may also have been meant to indicate that these mummies were former pharaohs, but that would be absurd.

There seems to be about 30 of these guys. They may have preternatural strength and durability — this is not clear from the material. 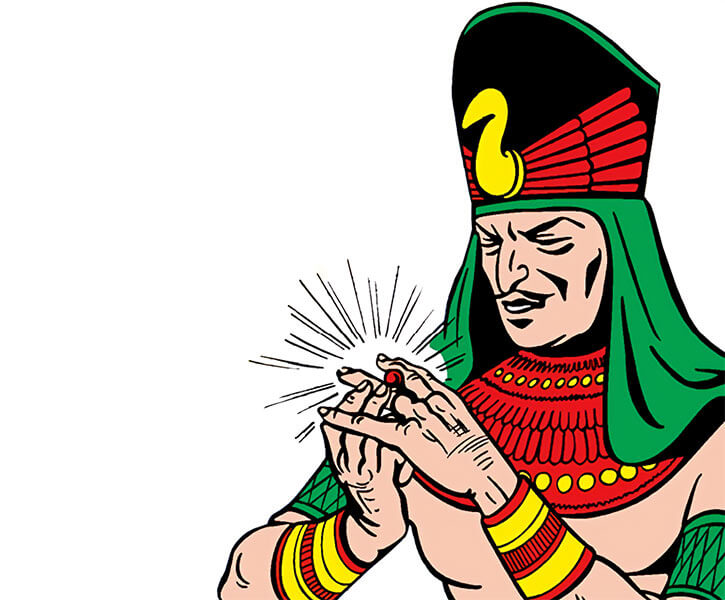 In 1948, an Egyptian ne’er-do-well grasped a chance his family had been waiting for generations.

British Egyptologists had unearthed and investigated some lesser pyramids, then moved on. But the scheming local (calling himself Tut-Ak-Mun) knew that they had missed something.

Tut owned ancient documents about hidden rooms under the pyramid. Plus an ancient ring and its phrase of power.

Once he held the ring in a secret room and recited the phrase (“My power is thine until the waters of the Nile shall engulf me and the followers of the ring forever !”), undead rose to obey his orders.

Tut wanted his new-found army to expel all foreigners from Egypt. He likely assumed that the natives would then all choose to follow him and make him a modern-day Pharaoh.

The mummies killed the Egyptologists before they could finish dismantling their camp. Then they started raiding nearby towns to kill and panic outlanders. 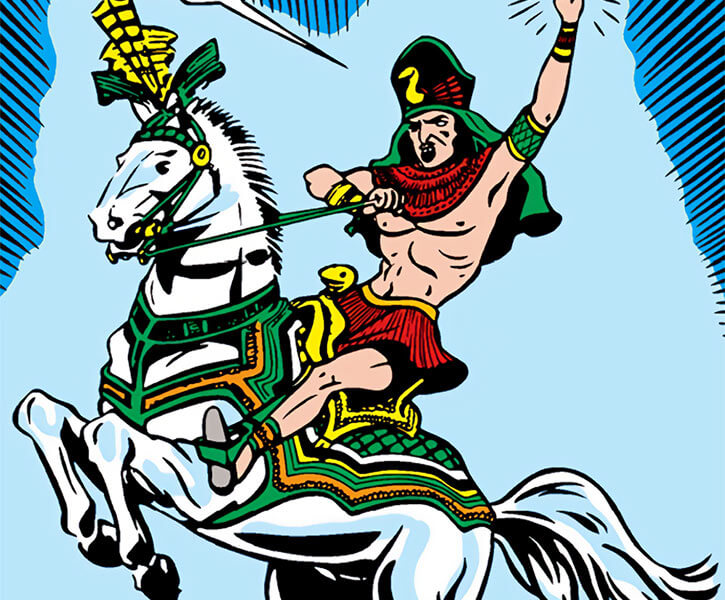 Behold the princess of the sea

Namora stumbled on one such raid as she swam down the Nile, and intervened. But she was surprised by the strength of the mummies and knocked out from behind.

Tut, smitten with the brine’s blonde beauty, offered her a choice between consortship and death.

Namora played along, hoping to discover a means to deprive the would-be Pharaoh of his mummies. She found Tut to be quite gullible, and soon discovered the role of the key phrase and of the ring. Tut even agreed to lend it to her out of love.

As Tut and his mummies were about to raid Luxor  , Namora rode out with the ring. After she warned and evacuated the foreigners here, she used the ring to have the mummies follow her into the Nile. This destroyed the enchantment, as per the phrase of power.

(In the comics, the mummies invade Cairo. That seems logistically difficult – Egypt is sort of large. Luxor is a proposed, more credible alternative.)

Tut-Ak-Men apparently committed suicide by jumping into the Nile in despair. Namora swam away still bearing the ring.

Presumably it was then held for safekeeping in Atlantis. Meaning it could be anywhere by now, given the chaotic history of that realm. And the mummies might still be somewhere in the Mediterranean…

Since it was a 1940s comic book, the odds that the name “Tut-Ak-Mun” comes from historical research aren’t that high. However, the WORG Crew is not one to be stopped by such trifles.

Using handy Egyptology texts, Darci suggests that Tut means “image”, the middle “K” sound could be “ka” (meaning soul, more or less) and “Mun” might be something like a pot or maybe water. Which I suppose could be assembled to translate as “Reflection of a soul upon water”.

As should be obvious this translation is more concerned with coming up with something that would look good in a 1970s black-and-white Marvel magazine with kung-fu stories, than as a serious translation of a made-up name.

If they move too quick (oh whey oh)

This prompted Peter to dig a little more :
A fairly interesting task that will include a lot of guesswork. Let’s see what we can find out; I’ll confer with my book collection of ancient languages (however mainly Akkadian, Babylonian, Sumerian and Sanskrit).

The name Tutakmun in my ear immediately sounds comicbooky and invented, so let’s check if it could be a proper, real name.

I’m not sure about the Egyptian vowel thing. AFAICT, there are individual hieroglyphs for the following vowels: a, aa, o, i and u according to one of my hieroglyph files.

The vowel “e” poses a problem since it doesn’t appear to have been written out (just like in modern Standard Arabic). They likely used a or i instead, depending on which sounded the closest in the spoken word. Hence the many existing spelling alternatives of, for example, Tutankhamun. 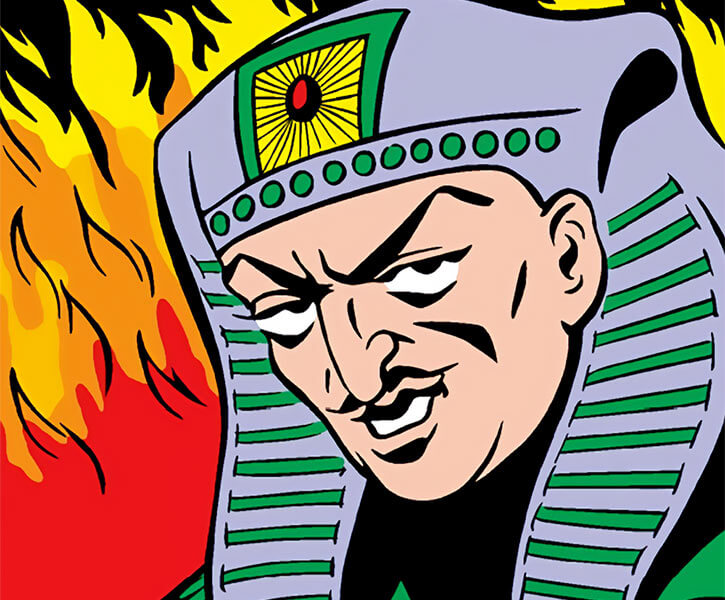 The word for water in old Egyptian was “mew”, a word quite close to “mun”. The only Egyptian I know of that include the combination “ak” are the word “bak”, which means male servant.

There is also a verb, “sekha”, that means remember, and “sekhtet”, which means weaver, but none of that seems relevant.

The name of “Tut-ak-mun” could mean image-soul-water, or as you said “the reflection of a soul on water”. That’s likely a serene and harmonious person, which seems a bit contrary to how Tut-Ak-Mun was presented.

All the bazaar men by the Nile

Also, keep in mind that a Pharaoh originally had a shorter name. After he became the living god, his name changed to its full form, often including the name of a god of relevance. So, if Tut-Ak-Mun was not yet officially THE pharaoh, he could be using his original, shorter name.

Let’s say that his patron god is Amon (rather likely). It would thus stick to his name after his “coronation”, and the new name could be Tut-Ak-Mun-Amon.

Alternatively, the word “mun” could be completely omitted, since his soul would no longer be reflected on water, but be a reflection of the god himself. But in this case it would lead to a confusing name. Tut-Ak-Amon, which is how they sometimes seem to spell Tut-Ankh-Amon.

It could have the gracious translation of “The (earthly) reflection of the soul of Amon on the water”. That is, he is the harbinger of the will of Amon on Earth.

They got the money on a bet

I’m saying all of this since the name ’Tut-Ak-Mun’ seems invented and not a proper Ancient Egyptian name. If it were a proper Pharaoh name it seems to lack grace and glory.

So, let’s stick to the inglorious transliteration of ’the reflection of the soul on water‘. And conclude that its not his full Pharaoh name.

Either that or note that it’s just an invented name, although I could be wrong. 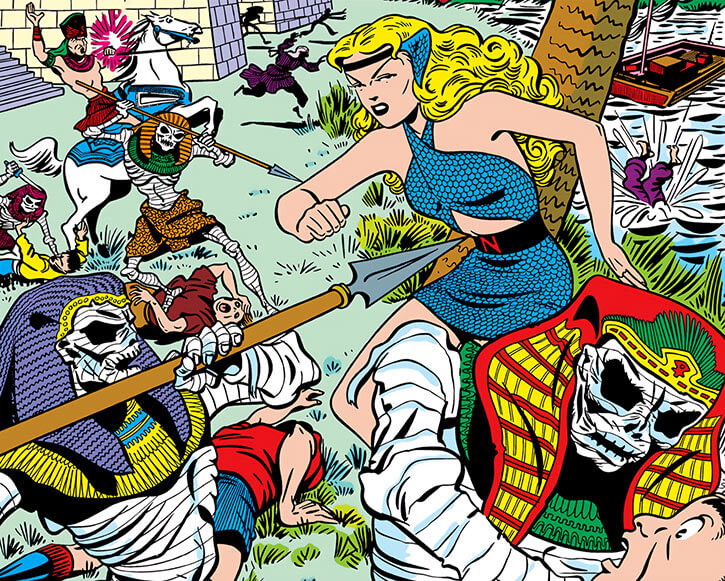 Tut dreams big and sees himself as the head of a glorious, rich kingdom – adored by his subjects, surrounded by beautiful women and dressed in fine Ancient Egyptian regalia.

He’s got the part with the regalia down pat. But the rest really needs work. Still, terrorising foreigners and some locals with undead raids isn’t difficult – so he can get that going.

Tut is hopelessly gullible and fascinated by attractive women, especially exotic-looking ones like the blonde Namora. He’s putty in their hands, to a ridiculous degree. Generally he seems emotionally vulnerable.

Tut blames foreigners for just about everything, and wants them out. He calls them “infidels”, though infidel to what is unclear.

“By the gods of my ancestors the Pharaohs, I shall punish the infidels who have defiled our sacred land !”

“She shall be my Queen ! With her beauty and my power, we shall restore the ancient glory of Egypt !”

Tut-Ak-Mun, the man who would be Pharaoh

Strange Appearance.
They may have some Vulnerabilities (flame would be traditional) but none have been demonstrated except possibly their Self-Linked Power being annulled when submerged in the waters of the Nile.
One might assume that they don’t speak English, but I wouldn’t take that chance.

The mummies might require to rest from time to time, since some were seen returning to their sarcophagi when not needed. They seem to have the same level of intelligence and initiative as a competent but overregimented soldier. 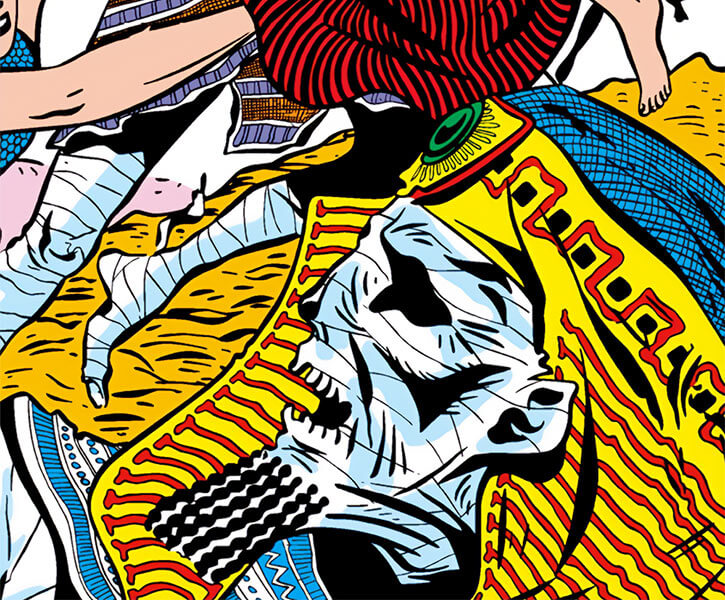 Undead ● 0 points ● Descriptor: Necromancy
The mummies may have specific resistances/immunities, vulnerabilities (say, to fire), etc.. But nothing was clearly demonstrated, except for their animation enchantment stopping if they’re submerged in the Nile.