Phase has the ability to pass through solid objects and become intangible (in DC Heroes terms, Dispersal). When thus phasing  she’s almost completely impervious to harm. She has such control of her ability that she can solidify only selected portions of her body. This allows her to punch or kick someone while remaining mostly ephemeral.

Her power level is so high that she’s practically impossible to harm, barring a surprise attack. Howbeit she still has to breathe, so she’s also vulnerable to gas attacks and the like.

Phase has learned to wield objects, make them out-of-phase, leave them in an opponent’s body (say, the head, in this case), and release them. This allows the object to solidify and instantly kill her target (Claws). This is rarely if ever done (Marginal).

Another, more modest application of her ability to partially solidify allows her to reach into locks and make them open (Thief — Locks and Safes).

Phase knows how to use firearms and pilot spaceships. She’s an excellent hand-to-hand fighter whose ability to hit while her opponents’ attacks pass through her makes her particularly devastating.

Research confirms that Phase originally *was* Phantom Girl, but isn’t any more. She is a victim of several retcons  (retroactive alterations of continuity) which fortunately don’t much affect her game stats. See the special sections below for details.

As part of the editorial decision to focus this writeup on Phase’s appearances in actual L.E.G.I.O.N. and R.E.B.E.L.S. stories, I’ve chosen to refer only lightly to her “current” revised history as one third of the Post Zero Hour Legionnaire Apparition. Again, see the special sections.

This retcon took place after L.E.G.I.O.N. and R.E.B.E.L.S. were cancelled, and thus doesn’t really affect her appearances therein. It was also prior to the return of the Multiverse, which may have an impact.

More to the point, Apparition already has a writeup on WORG (which fans of Phase should refer to). Once Apparition and Phase merge, Phase effectively ceases to exist as a separate character. Apparition’s stats entirely replace hers.

This writeup therefore focuses on Phase while she was a separate character appearing as a major character in a monthly comic book.

The Ghost of Past Futures, part 1

Clear editorial statements and strong in-story evidence indicate that the Pre-Zero Hour Phase was originally Phantom Girl (Tinya Wazzo) of the Legion of Super-Heroes, from the 30th century.

Technically, this was Phantom Girl II — from the post-Crisis, pre-Zero Hour incarnation of the LSH, as envisioned primarily by Keith Giffen and Tom & Mary Bierbaum. This Phantom Girl’s history was almost identical to that of the pre-Crisis Phantom Girl.

She and her teammates, however, were all the victims of manipulation by the Empress Glorith of Baalduur.

The Ghost of Past Futures, part 2

At the core of Glorith’s plan was the creation of a force powerful enough to prevent her rival, the master sorcerer Mordru, from amassing unstoppable power and conquering the galaxy. Glorith created the LSH by creating the heroic legend of teen-hero Valor (Lar Gand of Daxam) to inspire 30th century youths. She then provided financing in the form of R.J. Brande.

One of the richest men in the galaxy, Brande was also a Durlan from the 20th century. Once part of Vril Dox’s L.E.G.I.O.N., he had been displaced through time by Glorith to the 30th century. His wealth could be used to create a similar organization in this era.

Glorith planned to have the LSH and Mordru confront each other, severely weakening each other. From there she could pick off the survivors and conquer all.

Glorith’s plan went awry when Ultra Boy (Jo Nah), Phantom Girl’s lover, deduced her plan. He arranged for Mordru to confront Glorith before either ever fought the Legionnaires. Glorith and Mordru battled each other to a bloody stalemate. That left the Legion undamaged and strong enough to hold off both would-be conquerors.

The Ghost of Past Futures, part 3

When Glorith eventually learned that Ultra Boy was responsible for her failure, she took her revenge. Her displacement of the Durlan from the 20th century to the 30th had created a chronal imbalance. For some time she used that to create an “Iron Curtain of Time”, preventing Mordru or the LSH from traveling into their own future.

After learning of Ultra Boy’s interference in her plans, she used the energies of the “Iron Curtain” to explosively shift Phantom Girl to the 20th century. She would take the Durlan’s place, only a moment after he’d first vanished. The LSH thought Phantom Girl died in a freak accident, only days before she was due to marry Ultra Boy.

Instead, she appeared on 20th century Cairn in place of the Durlan. Her memories were wiped by the shock of unprotected time travel. Howbeit her sense of justice and heroism were intact, and she joined L.E.G.I.O.N.

The shifting timelines  which were the build-up to Zero Hour and the relaunch of the L.E.G.I.O.N. comic into R.E.B.E.L.S. saw Phase retroactively transformed into a different character. She now was Phantom Girl’s previously non-existent cousin Enya Wazzo.

Enya was a mercenary-minded trader with a reputation for driving a very hard bargain, sometimes forcefully. But she was nevertheless close to Tinya and admired her. When Tinya came to Bgztl to buy a wedding dress, she also visited with Enya, who accompanied her on the return trip back to Earth.

Their freighter was destroyed when Glorith attacked. But Glorith’s attack was clumsy and she shifted Enya, not Tinya, to the 20th century to replace the Durlan. Tinya was actually lost in time, but Glorith was unaware of her mistake.

The shock of unprotected time travel wiped out Enya’s memories, and put her in a new situation where her own buried heroism came out. She proved as brave and resourceful as her cousin.

During Zero Hour, Jo Nah tracked Enya through time to L.E.G.I.O.N. HQ on Cairn. That was while he was attempting to find Phantom Girl. He recognized Enya and reminded her of her past, theorizing that Glorith had probably meant to send Tinya through time, not Enya.

Jo offered to take Enya back home to the 30th century with him. However, she chose to stay with her friends on Cairn. When L.E.G.I.O.N. went bad, she joined R.E.B.E.L.S..

Enya’s introduction was never credible, even had it not been so abrupt. There were a number of factors that didn’t add up unless Phase were truly Phantom Girl. Such as :

The creation of Enya was a thinly veiled editorial pretext. It had devised to keep Phase out of the “End of an Era” storyline, which wiped the Giffen/Bierbaum LSH from the timeline, and to keep her as an active member of the L.E.G.I.O.N./R.E.B.E.L.S. cast. It’s little wonder that “Enya” lasted barely a year after she was introduced in Zero Hour.

Enya proved to be a short-lived alternate version of Phase. She was quickly retconned out of existence again, telling her friends that discovering her identity and finding out about her past “never happened.”

This made sense. Jo Nah/Ultra Boy and Tinya Wazzo/Phantom Girl had been wiped from the future timeline in “End of an Era”. Thus, there was no such timeline left for Phase to be connected to.

To be more precise, she was one-third of Apparition, who was born with the power to phase *and* the power to triplicate. See Danielle Mendus’s Apparition writeup for details.

One of Apparition’s three bodies was forced into servitude by the Luck Lords. Later on, it was flung back in time and became Phase. In essence, there were three versions of Phase, each of them retroactively replacing the prior version with a rewritten history. So that as far as L.E.G.I.O.N. was concerned, there was only one.

The three versions are:

When the two met, Phase merged with Apparition. Then she went back to her timeline in the late 30th and early 31st centuries.

Phase III’s origin is little more convincing than Phase II’s. For instance, it still doesn’t explain where her transuit or her combat training (which is far superior to Apparition’s) came from. Moreover, Apparition was notably younger than Phase.

Despite the multiple and conflicting origins, all three versions of Phase have identical stats, appearance, and personality. Thus, they can all be depicted with the one writeup. However Phase III, after merging with Apparition, uses Apparition’s stats. Not those given here.

After the events of Infinite Crisis, it now appears that the Multiverse has returned. Furthermore, a reasonable facsimile of the Pre-Crisis Legion exists again, complete with Phantom Girl. However, Apparition and the post-Zero Hour Legion also still exist on an alternate Earth.

Presumably, Phase was still Apparition, and was transported across dimensions as well as across time when she first appeared on Cairn. So far, none of the new adventures of the Pre-Crisis LSH seem to affect Phase’s background.

Phase’s origin is a mystery, both to herself and to her teammates in the Licensed Extra-Governmental Interstellar Operatives Network (L.E.G.I.O.N.). She appeared from nowhere in L.E.G.I.O.N. headquarters on the planet Cairn. Phase popped up right on the spot occupied a moment earlier by the L.E.G.I.O.N. member known only as “the Durlan”.

Neither she nor L.E.G.I.O.N. ever learned what had become of the Durlan. Nor did she have any memories prior to her appearance on Cairn.

Her learned skills were all intact. She had no problem with mathematics, fighting skills, piloting, language (although she had trouble communicating at first, describing the version of Interlac spoken by L.E.G.I.O.N. as “archaic”), etc.. But she had no personal memories prior to the moment she appeared in the Durlan’s place.

Finding herself strangely sympathetic to the L.E.G.I.O.N.’s mission of justice, and with no other prospects, she joined Vril Dox’s L.E.G.I.O.N.. She took the name “Phase” due to her ability to pass through solid objects.

Her poise and ability quickly won her the respect of her new teammates. Even, grudgingly, Vril Dox, who resented her taking the Durlan’s place. After the death of Lyrissa Mallor — for whom Phase had felt an instinctive affinity — Dox even selected Phase as his new second-in-command.

Though she still longed to know her true identity, even telepathic probes failed to uncover any memories. Therefore, Phase dedicated herself to the cause of the L.E.G.I.O.N.. She forged strong friendships with Strata, Stealth, and Telepath. She got along very well with Garryn and Marij’n Bek, Captain Comet, and practically all other L.E.G.I.O.N. operatives. 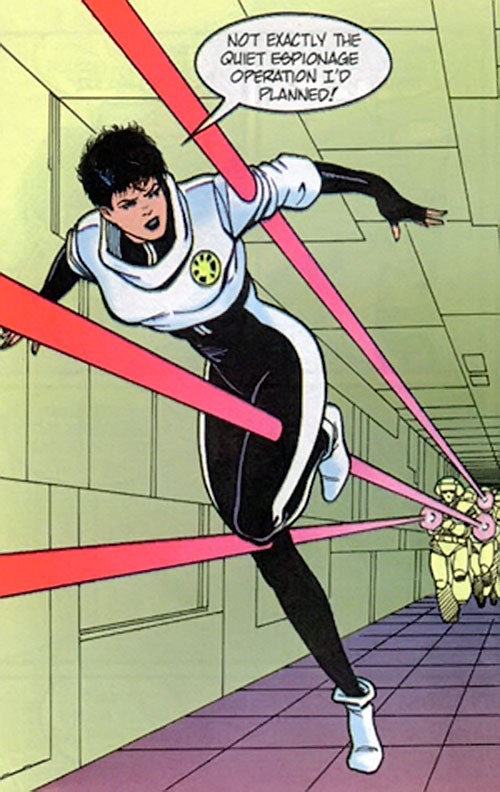 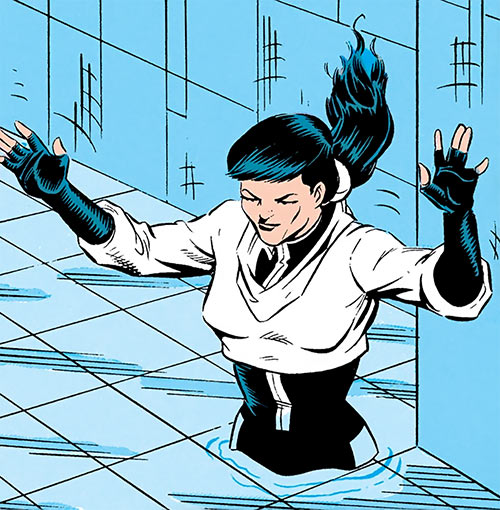