Phobia can force her targets to suffer their worst fears, manifesting them within the target’s mind.

Phobia was one of the victors of the gladiatorial games held among the enslaved Inhumans by Loki in the 31st Century. She thus became part of the small cadre of Inhumans Loki was grooming to be his personal strike force. These were to help him claim the throne of Asgard .

Just as the time arrived to attack, the Guardians of the Galaxy investigated the Inhumans enslavement. This brought them into conflict with the Inhuman Assassin Squad. Phobia joins in the torment of the captive Guardian Talon, holding him captive with her powers. But the other Guardians arrive to rescue him.

The Inhumans leave the battle as Loki calls on them to join him in his invasion of Asgard.

Attacking Asgard, they made significant headway against its defences. But the Guardians arrived to oppose them. When the fight appeared to be turning against the Inhumans, Phobia pretended to flee. This drew Nikki away from her team mates, where she’s an easy target for Phobia. However, the other Guardians caught up with them.

When Woden, son of Thor joined the Guardians, the Inhumans and Loki were soon defeated. They were banished to The Black Canyon, an inescapable prison nestled between Niflheim and Muspelheim. 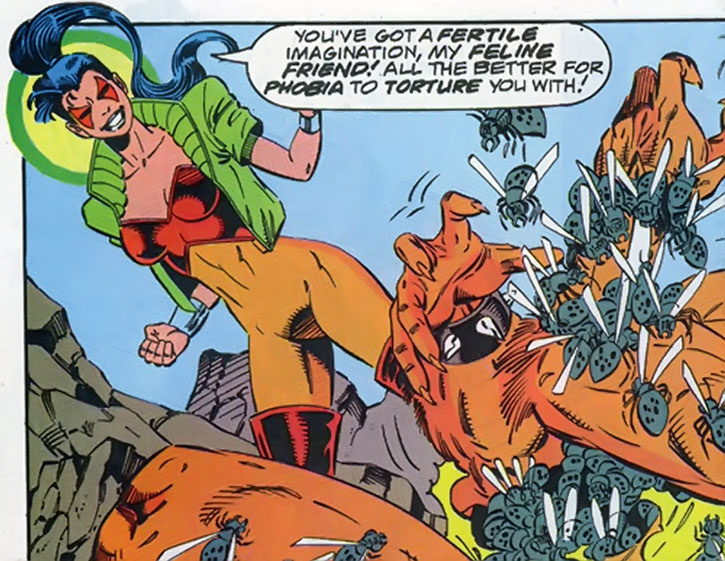 Vicious and gleefully sadistic, Phobia takes pleasure in using her powers on others. She will happily pick on a lone target, or work with her team mates while they’re winning.

But if the opposition looks tough, she’ll try to draw one off so that she can attack them while they lack support.

“You’ve got a fertile imagination, my feline friend ! All the better for Phobia to torture you with !”