Phobius can emit a mental pulse from his brow. It makes people highly averse toward whatever Phobius wants – such as water, a gas, himself, etc.

Subjects falling under his influence will actively avoid touching or even approaching what they’ve been made afraid of. This effect is specific, but very strong. It can even affect very strong-willed heroes – though as always chance plays a significant role.

He’s obviously the least physical of the Minions, and the tactics of the group take that into account. Since he’s not on the front lines, Phobius is usually the one handing the technological assets.

He seems to be smartest and least impulsive of the bunch.

Phobius is assumed to be either a Deviant or an Inhuman. He has been serving, along with Helio and Gronk, as the small cadre of enforcers and agents known as Mælstrom’s Minions. They’ve been around since at least 1981.

During Mælstrom’s next big plan (to absorb the power of Earth’s rotation within himself, likely destroying the planet in so doing), the Minions were of course at his side. But the crisis drew in a whole roster of Avengers from both coasts, and the Minions were completely outmatched.

Phobius did manage to hit the first Avenger onsite, Captain Marvel (Monica Rambeau), with a huge burst of his phobia power. But that was about it.

Years later, Phobius and the rest of the Minions were present to assist Mælstrom when he stole Quasar’s Quantum Bands. Mælstrom, under his alias as Malcolm Stromberg, invited Quasar and his colleagues in his property under the pretence of discussing business.

Phobius used an image inducer and the name “Phineas” to pass as Stromberg’s aide. His job was to make Moondragon, who was undercover as one of Quasar’s employees, too afraid of speak. The objective was to prevent her from warning the others about what the danger she sensed. It worked for much of the dinner, though Moondragon eventually broke the fear through willpower.

After Quasar’s hands were cut off for Mælstrom to get the bands, Phobius tortured the hero with an energy-charged whip. Infuriated by Quasar’s refusal to submit, Phobius ended up killing him.

This death attracted the attention of the Ghost Rider (Ketch), who charged in and dispersed the Minions to reach Quasar. The Minions did not fare much better against the rest of the rescue efforts, with Sersi turning Phobius into a rat.

The Minions and another set of servants of Mælstrom, the Weird Sisters, later executed on instructions left by Mælstrom to bring him back and imbue him with great power. They did so by draining the life force of a select set of Deviants, Eternals and Deviants-Eternals hybrids.

The Minions and Sisters were successful, though Mælstrom’s bid for power was eventually foiled by the Fantastic Four and a number of Eternals.

Officially Phobius is 5’9”, but he’s consistently drawn as being much smaller than that.

Petty, sadistic, haughty, arrogant, wants to be respected at any cost. Phobius sometimes seems to consider he’s the leader of the Minions, which is probably not the case.

“Fear is at the foundation of human existence. It is my gift to stimulate the fear centres of the brain, making all who live prey to their own nature…”

“Nobody makes me, Phobius, look foolish boy… nobody ! I am the master of fear and the king of pain !”

Equipment:
Can be equipped with Gadgets provided by Mælstrom, including image inducers. 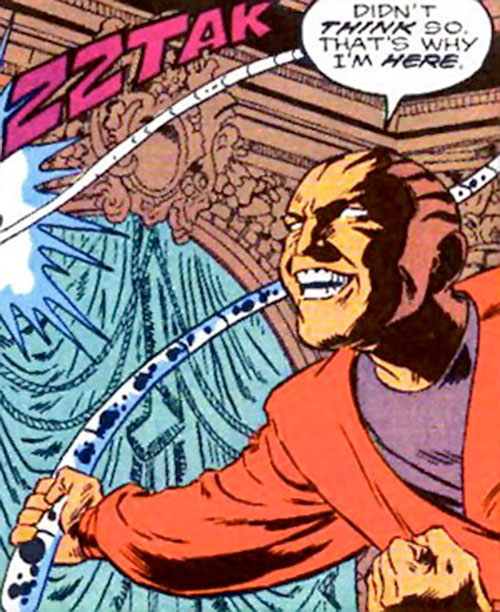 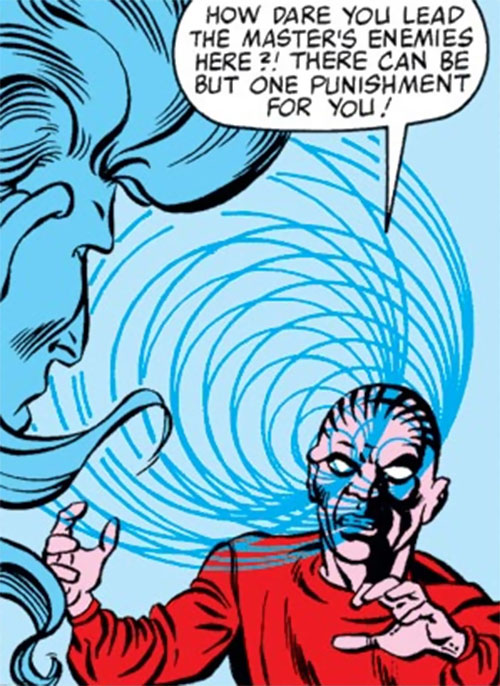