Rachel has full access to the Phoenix Force during this period. This allows her to access a seemingly endless well of energy, which has allowed her to go toe-to-toe with Galactus, even staggering him at one point.

Her regular powers have been amped up, and she has learned some new tricks with them.

She has also exhibited uses of the Phoenix Force which do not appear to be linked to either her telekinesis or telepathy. These include jumping about in time over short periods, opening stargates, or absorbing energies.

She has also exhibited a fairly skilled level of combat ability, both unarmed and armed. She used firearms or a pair of swords with ease.

A prisoner on Mojoworld, she eventually managed to escape, travelling the dimensions hunted by Mojo’s Warwolves. Finding her way back to her adopted home dimension, she found herself also being hunted by the Technet. These were interdimensional bounty hunters dispatched by Opal Luna Saturnyne, Omniversal Majestrix of Otherworld. 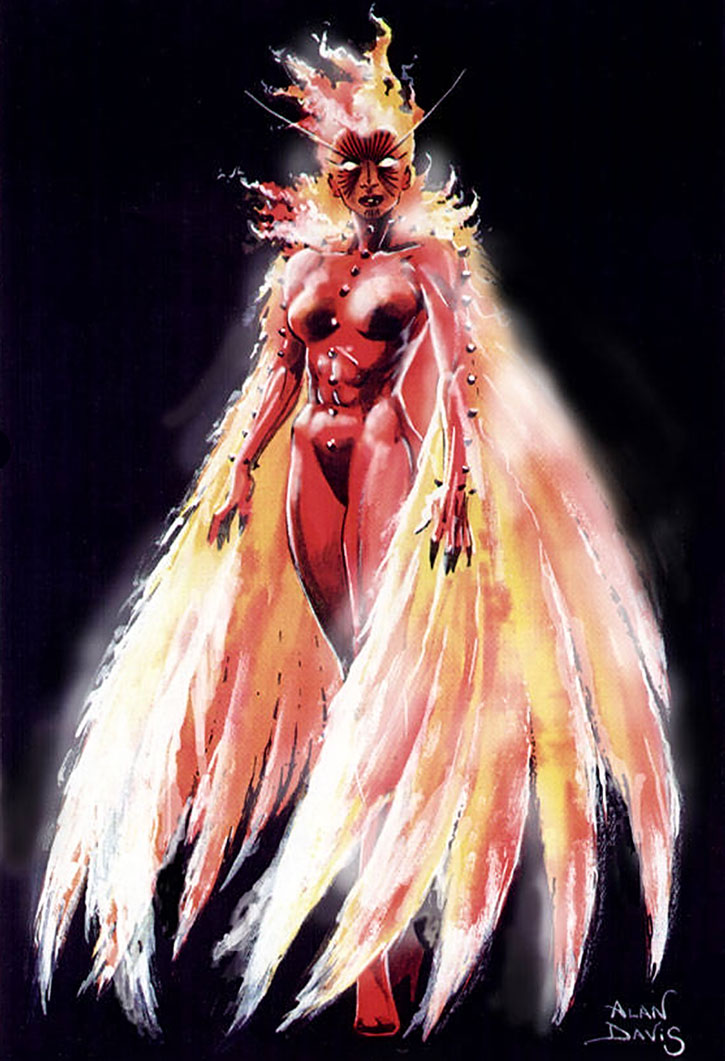 Fleeing them in the streets of London, she was aided by the surviving members of the presumed dead X-Men, Shadowcat and Nightcrawler, and their allies, Meggan and Captain Britain. They defeated her pursuers, and decided to stay together, primarily at Rachel’s urging. They adopted the team name Excalibur.

Excalibur then clashed with an alternate reality version of the group from a reality where Nazi Germany had won the war. This reality didn’t have a version of Phoenix, and it has been stated that she’s unique in the multiverse. They wound up in possession of Widget, a robot head of unknown origin, which could transport them between dimensions.

They had little control over it, though. It randomly transported the group without their input, along with Alistaire Stuart, head scientist of WHO (Weird Happenings Organization).

Cross-time capers and the Big G

The group travelled through a number of alternate realities as they tried to get Widget to return them home. Their travels eventually brought them to the attention of Opal Luna Saturnyne, upset by the damage their journeys were causing to the fabric of the multiverse. She diverted their journey, bringing them to Otherworld.

Phoenix disguised herself as the missing Shadowcat, an obvious falsehood which Opal chose to ignore when she confronted them, returning them all home. 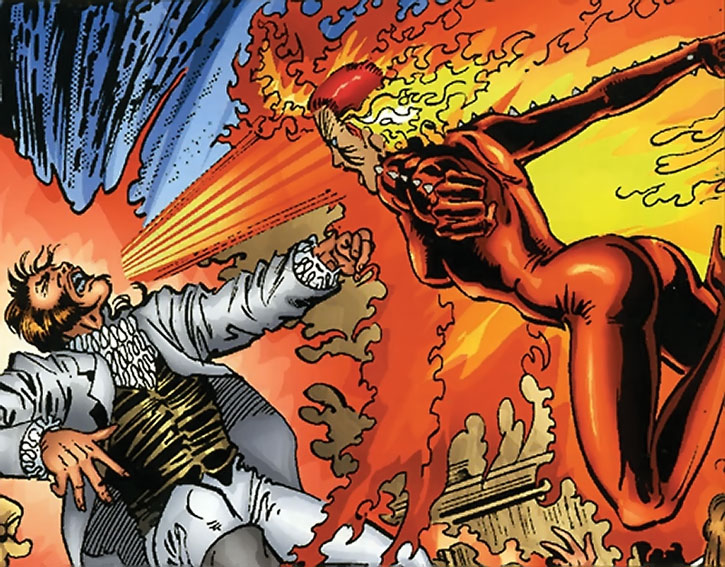 On returning to their Earth, however, Phoenix was confronted by Galactus. He was concerned that her ability to destroy universes could endanger his existence. Rachel had little trouble dispatching Galactus’ herald, Nova. But she realised that for her and her teammates to battle Galactus himself would probably result in the destruction of Earth, so she surrendered herself.

Galactus affixed her onto his machines, and began to drain her powers, watched by the rest of Excalibur and Death, who had turned up to observe. The operation was halted when stars began blinking out around them. Death revealed that the Phoenix Force was an integral part of existence, and that Galactus’ actions against her threatened the survival of everything.

Realising that her use of the Phoenix Force was scrambling her memories, Rachel decided to stop accessing the Phoenix Force, relying instead on her innate powers. She didn’t get much of a chance to maintain this decision, though.

Excalibur was soon had to face the Anti-Phoenix. They learned that this was the reason the group had been brought together. This was also why Opal Luna Saturnyne had set the bounty on Rachel, but ignored her when they’d met.

The five original members had to pool their powers, temporarily becoming one being, in order to fulfil Opal and Roma’s (and ultimately the presumed dead Merlin’s) plan. Phoenix faced the Anti-Phoenix. She won the battle, but Rachel was left comatose.

The Phoenix Force itself then took control of her body, flying off into the universe, leaving her team mates. After a confrontation with Galactus, during which the Phoenix managed to stagger him, it was convinced to give up her link to the physical realm, to return to where it belonged.

It woke Rachel, leaving her a limited portion of the Phoenix power, while its consciousness left her. Rachel returned home, reuniting with Excalibur, determined to return to her future to use the remaining power to fix it. 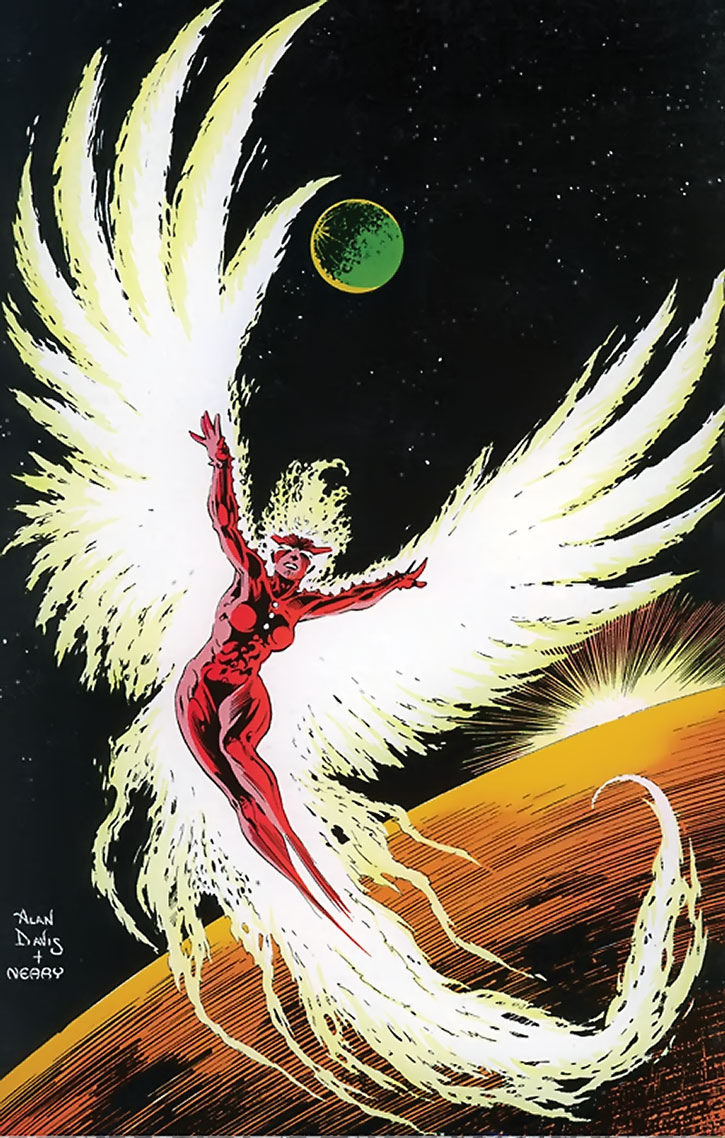 She tried to return alone to her future, as the power left to her wouldn’t be enough to take her team mates along for the ride. But her powers interacted with Widget, who had been in her future period. They drew the rest of Excalibur along with her, but Rachel was quickly captured by Ahab.

Taken to the main Sentinel base, she broke free as the rest of the team, and some local allies, infiltrated the facility. Unable to defeat all the Sentinels, they instead reprogrammed the Sentinels’ prime directives to preserve all life. Returning to the group’s home time, however, Captain Britain was lost in the time stream.

Rachel finally met the Jean Grey of this time period, alive again at this time. She made peace with her feelings about her, especially on learning that Jean and Scott were to be married. She attended the wedding, one of the happiest times of her life.

When Siena Blaze attacked Muir Island, where Excalibur had relocated, Phoenix saved the life of Rory Campbell, a new scientist employed by Moira MacTaggert. She did not recognise him as the man who would eventually become Ahab.

Realizing that she was Captain Britain’s only hope of escaping from his prison, and accepting the cost of her action, Rachel freed Captain Britain, taking his place trapped in the time stream.

She’s more confident now, almost to the point of arrogance at times. Rachel is greatly affected by the Phoenix Force, leaving her very emotional and impulsive, often believing herself unbeatable. She can often be gung-ho in tense situations, although she can be reasoned with.

She does have to fight to retain control of the Phoenix’s passionate nature. When tired or distraught, can sometimes have trouble controlling herself.

During this period, her link to the Phoenix Force scrambles her memories, sometimes giving her false ones. This was done intentionally by the Phoenix Force, as her previously unbalanced state would have made a volatile combination with the Phoenix’s fiery nature.

It left her uncertain about herself at times, but it was useful in helping her overcome the traumas and guilt which affected her earlier in her career.

“You don’t understand, Warwolf. I’m free — and no one’s ever going to cage me again !”

“I’ve run my whole life. I can’t remember a time when I wasn’t afraid. I let people tell me what to do — it’s easier that way, y‘know… saves you from having to take responsibility for anything. Well, I’m tired of running. I want to take a stand. Because if I don’t, then maybe I better let the Warwolves carry me back to the make-believe slaveworld where I belong. A world of illusion and artifice, where whatever sells best gets the glory, whether it’s truth or lies.”

“I’m Phoenix. I accepted the power and now it’s time to prove I’m worthy of it.”

The spectrum of which the Green Lantern’s energy is a part is actually a circle, with the missing piece being the essence of chaos and passion which opposes the orderly and unemotional green. This colour does not fit into the known spectrum, but can sometimes be seen in the White Hot Room (or you could just replace the Orange lantern).

The Phoenix Force is the primal life force of the universe, and cannot be contained by a device, or wielded by anyone it does not choose itself.

The Guardians view this expression of chaos with wariness, and the Green Lanterns are warned to be wary when in its presence, but not to tackle it alone.

During the early part of her time as Phoenix, Rachel’s telepathic abilities are more than she can sometimes control. This is especially true when surrounded by a lot of strong feelings, or when her friends are endangered. She will occasionally have such a rush of feelings from such high emotions that she collapses (this is the usual cause of her MPI flaring up).

She has shown a more serious version when her abilities interacted with Meggan’s while they slept, during the early period of Excalibur, when neither of them had complete control over their powers, and they each began to take on the appearance of the other.

Treat this as Chameleon (Lack of Control, only duplicate target of telepathy): 08, although it’ll be at the Gamemaster’s discretion when it happens and whether she can exercise any control over it. This ’ability‘ evolves further by the time she becomes Marvel Girl.

When the Phoenix Spirit itself is in control of her body, its access to the Phoenix Force is far greater, allowing it to go toe-to-toe with Galactus, with its Power Reserve at 20 APs without the Limitation, and it has full Life Support.

While battling Cable, she makes a small time jump which Professor (Cable’s confidant) claims is an ability of hers separate from her Phoenix abilities. I’m uncertain of how certain and correct he is, and (apart from earlier large time jumps which were apparently related to the Phoenix powers) there has been no further uses of this power. So I’ve left it to be covered by her Omni-Power for the moment.

You may wish, instead, to give her a few APs of Marginal Time Travel.

Source of Character: Marvel Comics (this covers the period from the Excalibur: The Sword is Drawn GN to Excalibur #75). 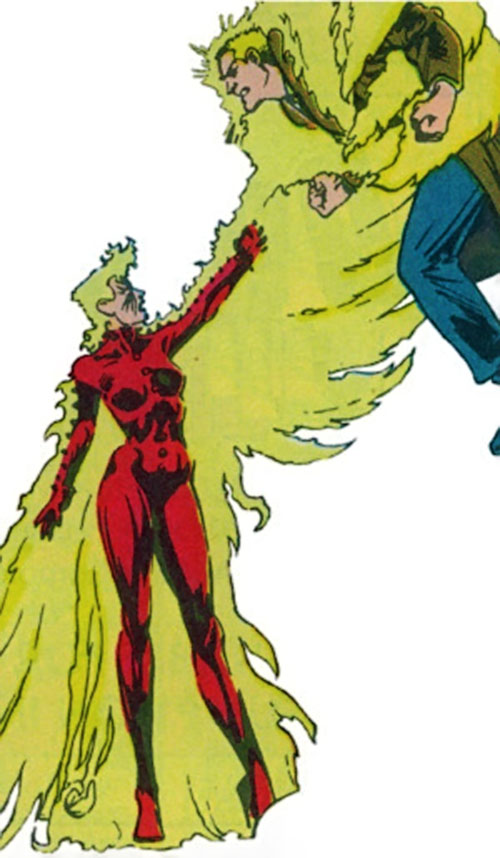 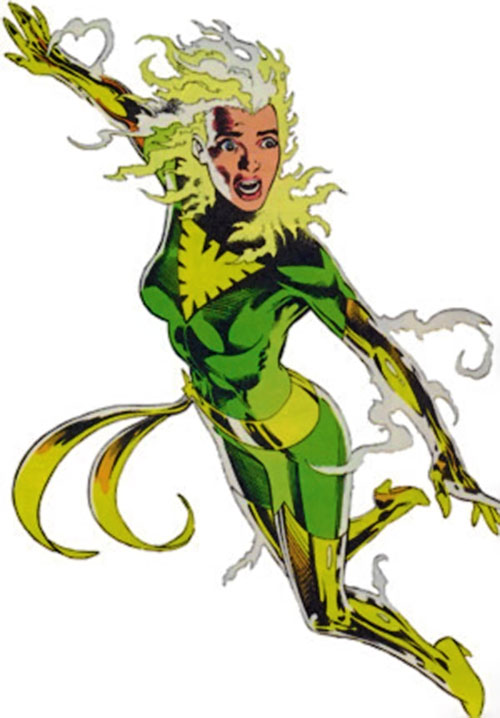 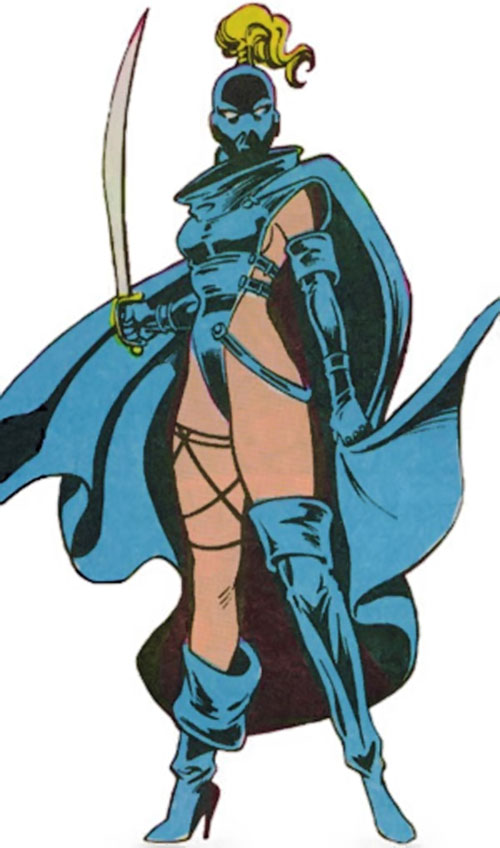