None, just uses his special camera.

He appeared in “Spider-Man Puts Himself in the Picture”, which was in Avengers #182, among other places.

Hanging from a wall, Spider-Man oversees Photoman taking the picture of an unsuspecting young couple.

Knowing the villain’s modus operandi, Spidey swings down to attract Photoman’s attention. “Betcha can’t catch me, Photoman !”, says Spidey. At the flash of the camera, Spidey plays possum, pretending as if he had been immobilized like Photoman’s other victims.

When the villain goes through Spidey’s pockets to find loot, he finds a surprise instead, “Hostess™ Twinkies Cakes. An unexpected treasure, Spider-Man. Didn’t think you had such good taste.”. While busy devouring the golden sponge cakes, Photoman completely forgets about Spidey, who webs him to the side of a building.

“Guess I’ll hang around here for a while”, says Photoman. At least he gets to keep the Twinkies. Spidey’s parting remark, “Smile… and say Twinkies cakes, Photoman.”

In 2009, Photoman was seen in the S-Wing of an unspecified New York prison. Her name was given as Vincent Charles, and he had been allowed to retain an antiquated camera. He briefly participated in an accidental breakout, but everybody was brought down using sedation foam.

Photoman is kind of a schleppy-looking, gray-haired older guy, who wears a green jumpsuit with brown boots, belt and photo case. He has lots of straps, small cases, etc., draped over his shoulder.

His most annoying feature is a goofy brown hat that makes him look like a Hee-Haw  reject.

Photoman’s sole shtick is to pose as an ordinary photographer, and faze unsuspecting victims with his special camera. He then robs them while they’re immobilized. 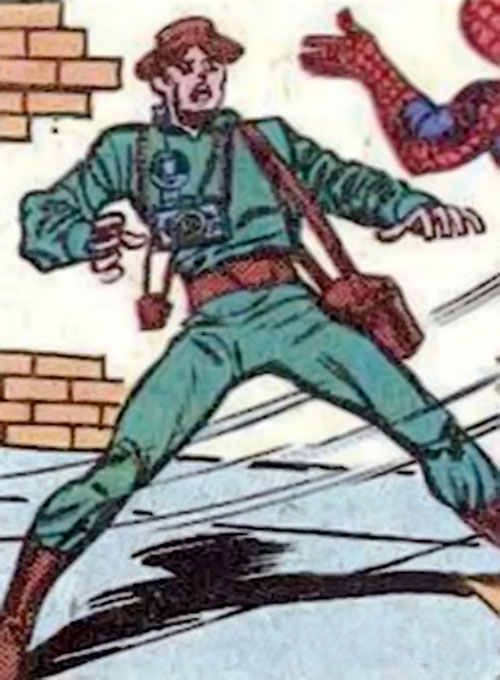