A mutant of her race, Photon can fly and shoot beams of energy from her eyes.

Photon was born to the primitive tribes of Centauri IV. Her powers emerged when she was still an infant, for which she was labelled an abomination, and was to be killed because of it. Her parents rebelled against the tribe, and while her father gave his life holding the tribe back, her mother fled to the wilds with her.

However her mother didn’t survive long, leaving Photon alone in the wild.

Her salvation came in the form of the visiting alien Interface, and his companion. Interface took pity at the infant, having lost his own daughter. He took her in, raising her as his own. She grew to become part of Interface’s mercenary group, Force. Photon believed contentedly that the rest of her race had perished in the Badoon invasion.

Quest for the sacred shield

When Interface learned of a sacred shield which supposedly bestowed great power on its wielder, he led Force on a quest. They eventually tracked it down to a planet run by the computer Main Frame. It forced them to compete against another team that had been searching for the shield, the Guardians of the Galaxy.

Photon faced a fellow Centauri, Yondu. Believing himself the last of his kind, Yondu was shocked to see her. He also was horrified to learn that she didn’t follow Centauri beliefs. Yondu tried to convince Photon that they were the last chance of saving their race. But she wanted nothing to do with him, and easily beat him when he refused to defend himself against her.

With the other contests resulting in draws, the final contest came down to Interface versus Vance Astro.

Interface easily subdued Astro. But when he seized the shield, he didn’t understand that its power was a symbolic one. He was so caught up in trying to access the power that Astro managed to take it away from him. Losing due to his motives rather than the contest, Interface, Force, and their ship were teleported 15 parsecs  away by Mainframe.

Seeing no benefit in returning to challenge Mainframe or the Guardians, Interface ordered them to move on to other possibilities.

When Force were attacked by Malevolence, their resistance was easily dispatched. The one exception was Brahl, who happily made a deal with Malevolence. She declared them her slaves, using her power to keep them in line. She then assigned Brahl as their new leader.

Malevolence led them to Homeworld, centre of the Universal Church of Truth. There, she challenged for the role of matriarch to Protégé. When Malevolence sensed the Guardians, with her main rival, Aleta, approaching, she dispatched Force to delay them.

Force attacked the Guardians on board their vessel. Photon again faced Yondu, telling him of her history. When she attacked him, he reflexively sliced her jugular. Interface lashed out, transmuting Yondu’s hand into vapour. After getting Photon to the medical bay in time, they called a truce.

Brahl fled to tell Malevolence of their treachery. Joining forces, Force and the Guardians travelled to Homeworld. Malevolence convinced Protégéthat they were coming to harm him, so he dispatched his elite guards. The battle was stopped when Starhawk reabsorbed Aleta and left, allowing Malevolence to win by default.

Force and the Guardians were spared when the Guardian, Replica, herself a Universalite, begged Protégé for their lives. He acceded, banishing them from Homeworld. Force left, looking for new opportunities for profit.

Usually calm and loyal, Photon had a deep hatred of her fellow Centauri. She would ruthlessly try to kill any she encounters. It is unknown how her feelings towards them will have been affected by her making peace with Yondu.

“The Way has long since been purged from my soul. I no longer feel resonance with my ‘fellow’ Centaurians. Indeed, I had hoped you were all dead !”

“I am now called Photon. My tribal name is forgotten. I was taken from Centauri IV long ago – I am no longer one with the circle of life !”

In the DC universe of the 30th Century, Centauri IV is called Amadus by the Earth colonists. But the natives are referred to as Centauri.

Equipment:
After they made peace with one another, Yondu gave her his Yaka Bow & Arrows.

Prior to her making peace with Yondu, she had a SIH (Centauri). 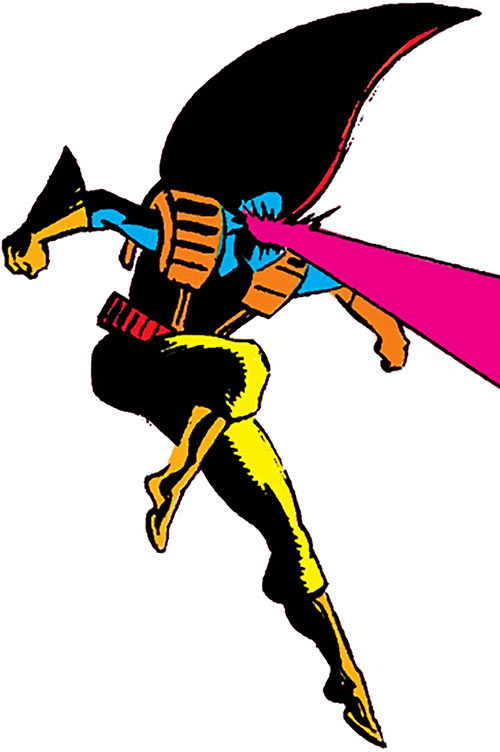