Pike is a half-breed. It is not yet clear if his father was a Daemonite or a Kherubim turned traitor. He has the ability to charge objects with deadly energy. This enables him to strike opponents or create a protective energy shield.

He is also a trained combat expert.

Pike joined the force of the Cabal, rising to the equivalent rank of general. He followed the steps of his father. Pike’s old man was the right-hand of Slaughterhouse Smith, who associated with Helspont to face Team One. How young Pike joined the Cabal is not known.

He had a relationship with Taboo at the time she was joining the Cabal. It ended when she refused to kill someone in cold blood and he tried to eliminate her. Taboo went on to become Backlash‘s partner and lover.

Pike was part of Helspont’s guard during the fiasco of his Project Reunification. Then, after a trip on Native American ground, he had the vision of himself killing a WildCAT. He couldn’t remember whom, but any one would do. He was thus heartened when Warblade came to him in their quest to find Maul whereabouts in the prelude to the Wildstorm Rising crossover.

He wears a black and red uniform with a mask covering all his features. On the harness he wears, we can see two handles protruding. Whether they’re swords or the 2 parts of his pike is yet unclear. Anyway, he fights with a 5’ pike he uses to strike with his energy blast or as a medium for his shielding power.

Yes, it’s pretty much a variant on the Deadpool costume, referring the Deathstroke the Terminator one, and difficult not to confuse with the Deathtrap costume.

“Amateurs ! You may be a gifted one, but you’re not in the same league with the Grifter or Zealot ! Or me for that matter !”

If you use Deadpool, he’s an early part of that Project X experiment. If you are in the DCU, he was part of the project that gave birth to Deathstroke the Terminator. Since he’s just a somewhat-clone of both characters. 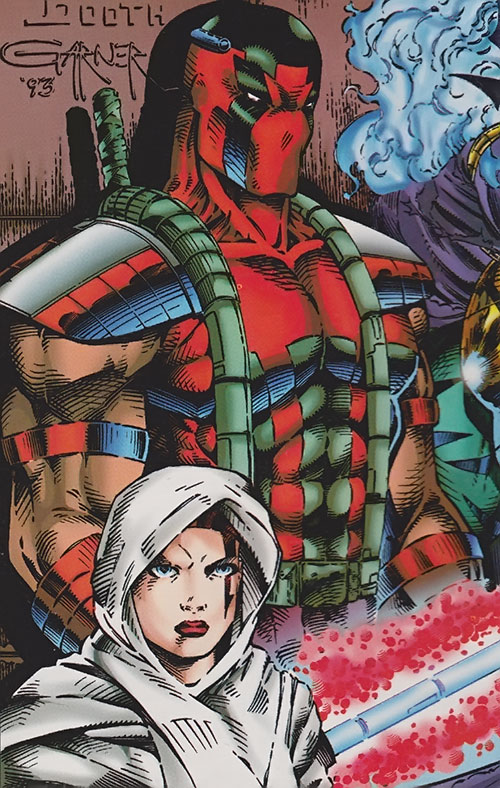