Pilgrim is a soldier, formerly member of Dane’s Team 7. She was linked with her symbiote at the same time as the other Wetworks members. We learn much later that she also is a werewolf.

Her symbiote enhanced its wearer’s natural abilities as usual. But it also gives her the power to shift through realities. The first application was to hide from others’ perception, then to travel through timelines.

Apparently, she cannot exist for a long period in a reality where her other self is still alive. She can use it to go back in time, but it’s hazardous for her and leaves her in shock. She can even see what will happen in this reality by inspecting what happened in faster going timelines.

Maritza Blackbird, a Native American, joined the US Army’s Delta Force  as a master scout. She was hand picked for Dane’s version of Team 7 for a recon/sniper role. See Dane’s character profile for more.

Pilgrim slowly discovered the unique asset her symbiote gave her. This became clearer where a version of herself from another timeline  abducted Maritza. They fought to become the only Pilgrim in both timelines. It took months for the MIA Blackbird to truly return, though she briefly popped up to save Dane’s life.

For her, six years had passed while she was fighting with her other self. But she never revealed the outcome of the fight. She now could travel between these dimensions, giving her limited teleportation and time travel abilities. But she seldom does that. It’s very demanding and leaves her in a state of shock.

When will she rage ?

When her brother joins the team, it was revealed that Ms. Blackbird was a werewolf. She had the exceptional ability to completely control her wild nature, thus avoiding any unwanted transformation.

In her youth, she had killed her mother during an temper tantrum that made her transform. She blocked this traumatic memory, and likely developed her exceptional control from there. To avoid unearthing her suppressed memories, the team did not tell her about her nature at first.

Pilgrim’s level of self-control makes her a very important asset to her lycantrope tribe. She used this to her, and Wetworks, advantage in a couple of hopeless situations.

Pilgrim is a good looking Native American woman with long black hair. Like her teammates, and as they seldomly aren’t in operation, she dress in tac gear.

She made hers the sniper motto : “one shot, one kill”. Like all Wetworks members, she’s a team player. Even when her brother and people are claiming her, she sticks with Dane and her team.

Bonuses and Limitations:
Shape Change is limited to Wolf (-4). 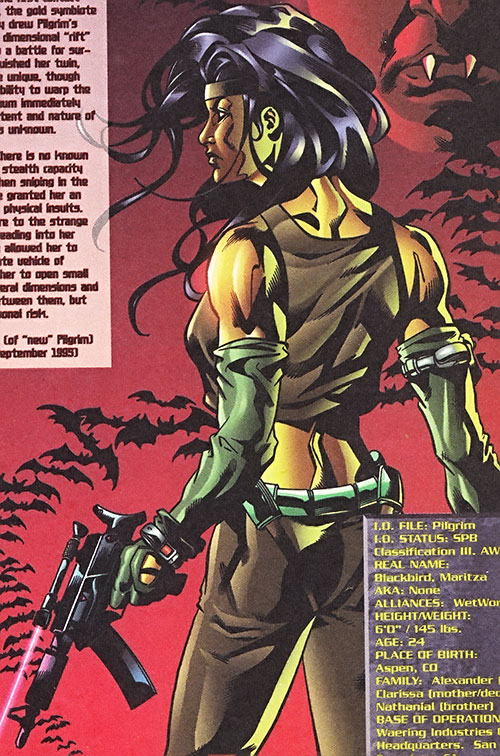