Pinball on his colleagues evoked goofier Silver Age  story, especially back when DC Comics was emulating the feel of the 1966+ Batman TV series with Adam West.

Pinball has few skills worth of note, though he apparently built his inflatable suit himself.

He lacks social graces and has next to no friends.

He was a decent pilot, though, and could fly helicopters – our game stats assume that he could sail boats, but that is a blind guess.

His one trick is that once inflated, his costume allows him to roll and bounce like a beach ball. How he perceives his environment is unclear, but he can see and hear normally. Vertigo and motion sickness do not seem to affect him either.

The inflated costume is good for mobility, protects from impacts, and can be used to overrun opponents. Though Pinball knows how to manoeuvre in this, it remains pretty hard to aim correctly. And a bad bounce can send him careening in wrong directions.

The protective abilities of the suit do not seem that great. It can reportedly stop handgun rounds (at least hollowpoint law enforcement rounds in medium calibres). But one good impact from Captain America (Steve Rogers)’s thrown shield took Pinball down and ruptured his suit.

The suit reaches full inflation in five seconds. This is done by pulling a cord near the neck, which bursts open a capsule of volatile, non-inflammable gas within the suit.

Pinball lives on a parallel Earth often called “Earth-S”. Most super-heroes native of that Earth have joined the Squadron Supreme. They are reminiscent of the pre-Crisis heroes of the DC Universe. The proper designation for “Earth-S” is Earth-712.

He reportedly became Pinball after he got fed up with harassment. He was being taunted about his obesity and short limbs giving him a very rounded physique. Presumably, stealing things and defying police as Pinball was his revenge against society. Pinball clashed several times with Nighthawk, Earth-712’s loose equivalent of Batman.

Pinball was a minor member of the Institute of Evil. He joined the team during the 1980s – some time after the Earth-712 Scarlet Centurion organised it. It is possible that he was invited by one of his few friends, fellow super-criminal Remnant.

During the 1980s, the super-heroes of Earth-S changed the rules. They took over the world to turn it into an utopia. Parts of their techniques involved brainwashing super-criminals to turn them into allies.

This horrified some of the campier, Silver Age-ish criminals whom Nighthawk fought, including Pinball. He and his colleagues Remnant and Mink contacted the genius Master Menace for a way out. He agreed to transport them to Earth-616 .

The trio coincidentally ran into Nighthawk. The hero had come to Earth-616 for help as he rebelled against the Squadron’s new policies. Nighthawk’s contact Captain America. Cap easily defeated Pinball.

The three criminals, Nighthawk and Captain America negotiated. Pinball and the other two would join Nighthawk to struggle against the Squadron, and return to Earth-712.

Over the following days Nighthawk and his recruits assembled a force of super-villains. They also had the help of the Sorcerer Supreme of Earth-712, Professor Imam. The team was called the Redeemers. Five members whom the Squadron didn’t know about were successfully sent to infiltrate the opposition.

The original three Redeemers were kept in reserve, and were joined by another renegade Squadron member, the Black Archer.

During the showdown between the Redeemers and the Squadron Supreme, Pinball was almost immediately knocked out by the Whizzer. He was but beginning to regain consciousness when the Blue Eagle (James Dore, Jr.), whose wings had been crippled fell on him from a great height, hoping that Pinball’s suit would cushion his fall.

That’s didn’t work, and both the Eagle and Pinball were killed by the impact.

Pinball is a mediocre boor. He tends to whine, and there’s little likeable about him.

“Send us to prison here, send us to a mental hospital — anything but don’t send us back ! The Squadron is merciless in their violation of human rights !”

“Why can’t people just get run over like they’re supposed to ?”

Bonuses and Limitations:
Accuracy and Acrobatics are only usable whilst wearing his inflated suit.

Advantages:
Expertise (Inflation devices), Misc.: Pinball has a +2CS OV/RV bonus against attacks based on vertigo and motion sickness.

Writeup completed on the 2nd of September, 2012. 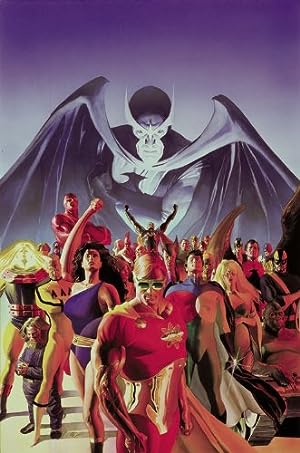 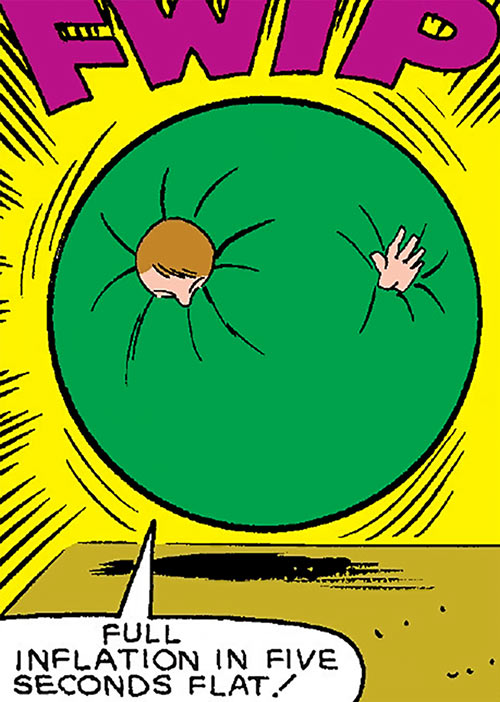 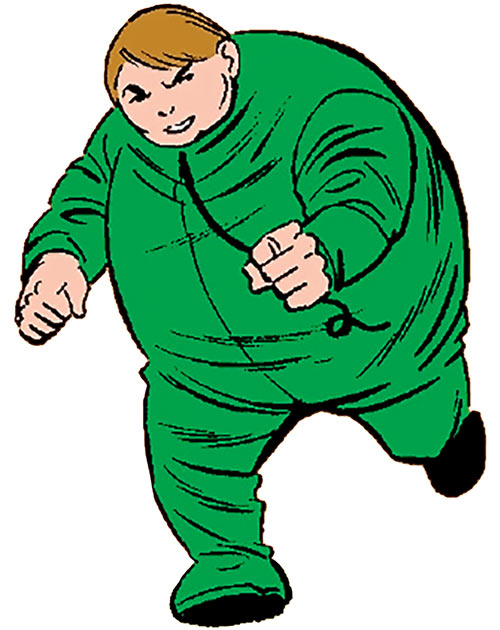