The Pinball wizard carries mechanisms that shoot a stream of ball bearings. These are metallic spheres similar to those used in pinballs. He’s a pretty good shot, and the barrage of steel balls can be as devastating as a full-auto firearm. He apparently carries a large store of balls in a container on his back.

Our game stats assume that he built his own equipment, and possibly that of the Printer’s Devil. This is an hypothetical, though.

The Pinball Wizard was a manufacturer of pinball games. He was driven to bankruptcy when the large World’s Fair happening in Star City bought video game arcades instead of pinball machines.

They were stopped by Green Arrow and never seen again.

The Pinball Wizard was bitter, bitter, bitter. He was lashing out at all sorts of automated and robotised technologies to convey the message that they cost jobs and livelihoods.

“Yeah ! They put us out of business, and I’m ready to return the favour – as only the Pinball Wizard can !” (opens fire) 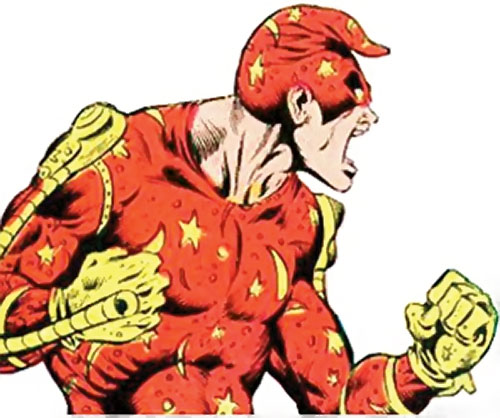