Pink Pearl is a skilled brawler and wrestler, and seems to have considerable strength to back her immense mass. One punch from her is enough to floor even people with above-average strength, and she can move and even jump with startling speed.

It is possible that her strength level is abnormal since she doesn’t seem burdened in the least by her body mass. But this hypothesis isn’t clearly supported.

In either case, most folks underestimate Pearl’s prowess and will not be spending Hero Points  against her. They simply do not realise how hard and how quickly they’re about to get hit. It seems that Pearl pulls her punches when hitting ordinary folks if she wishes them to stay conscious.

Pink Pearl’s body includes a thick layer of fat. Blunt attacks such as punches and kicks are simply not going to work unless delivered with extraordinary force, and our game stats assume that a baseball bat or the like isn’t going to fare much better. She also uses her fat to smother opponents, by pressing their face against her body.

However, if Pearl can actually be damaged, her durability seems limited, particularly when compared to her strength.

She was once knocked out by Diamond Lil. However this wasn’t taken in account for Pearl’s stats as Lil was shown as having about Class 10 strength – which isn’t the usual depiction.

Circus of dread, circus of terror !

Pearl had a number of helpers who, like her, were at once terrorists and circus performers. Most of those were seen to briefly to hazard stats but notable abilities are:

Pearl Gross is apparently a professional circus fat lady. She was hired in 1985 by the Québecois circus operated by one Clémentine d’Arbanville while they were touring Europe.

Over the following months, and as the circus returned to Canada, accidents befell various performers – the bearded woman, the strongman, etc.. But Pink Pearl always knew people who could quickly replace them while they were incapacitated.

D’Arbanville started suspecting that the accidents had been arranged by Pearl. With the circus back in Québec she contacted her old friend Jean-Paul Beaubier, whom she knew from her days as a Québecois separatist. Beaubier came with his sister Jeanne-Marie to investigate.

The circus owner’s suspicions were on-target. Pearl and the new hires were working for unrevealed backers who hired them to place a bomb on the site of a major international political negotiation. Knowing of d’Arbanville’s past, they expected her to take the fall. The investigation would then get hopelessly side-tracked toward Québecois separatists.

The plot was successfully defeated by the Beaubier siblings, secretly Aurora and Northstar. During the fray Pearl was accidentally hit by a thrown knife. Though her girth prevented the blade from damaging an organ, she passed out from shock.

Though Pearl lost a large amount of money by not completing her mercenary contract, she apparently escaped from the law, as she did not mention any prison time. The fight left her with a large scar over her sternum due to the knife wound, though.

In 1991, Pink Pearl was invited by Superia to a free luxury cruise to hear a pitch about Superia’s Femizons project. Since all guests were superhuman women and female costumed adventurers, it is possible that Pearl has low-key superhuman abilities.

Due to the intervention of Captain America and allies of his, the Femizons initiative never took place.

Though she entered the club as Jeanne-Marie Beaubier, she soon reverted to her Aurora persona and caused trouble by climbing on the stage and groping the dancers.

Pink Pearl moved in to expel the troublemaker, and recognised Beaubier, whom she blamed for her scar. This resulted in a brawl between Gross, Beaubier and Beaubier’s colleagues Lilian Crawley and Heather Hudson.

After the police broke up the brawl, Pearl returned to her establishment since she had acted within her rights as a club owner.

Pearl wears bright pink clothing, and given her nickname one assumes that she always performs wearing this colour. For some reason she always refers to herself in the third person.

Not much characterisation was apparent. Pearl apparently insists that she’s a delicate and sensitive person, and likes to launches into lengthy monologues to expose what her master plan is.

“Keep your nose out of this, pretty boy. So far you don’t know enough to hurt Pearl’s plans. Keep yourself to yourself, and Pearl may let you walk away from all this with a whole skin.”

“Language ! I *said* Pearl has a delicate nature !”

Advantages: Misc. (Pearl has the No Vital Area Drawbacks, but only vs. blunt attacks and against opponents who cannot reach her head), Misc. (If Pearl gets RAPs in Wrestling or Grappling an opponent, that person will be unable to breathe for as long as Pearl maintains positive RAPs).

Pearl’s Protection is not counted in the PL since it’s Limited 2 – but against an opponent with only blunt/unarmed attacks at their disposal her Dodge/Toughness tradeoff becomes 7 and her Parry/Toughness one becomes 9. Her Averaged PL thus rises to 5.8. 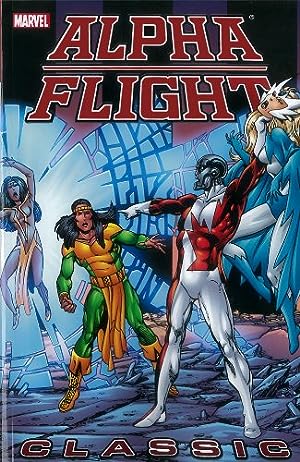 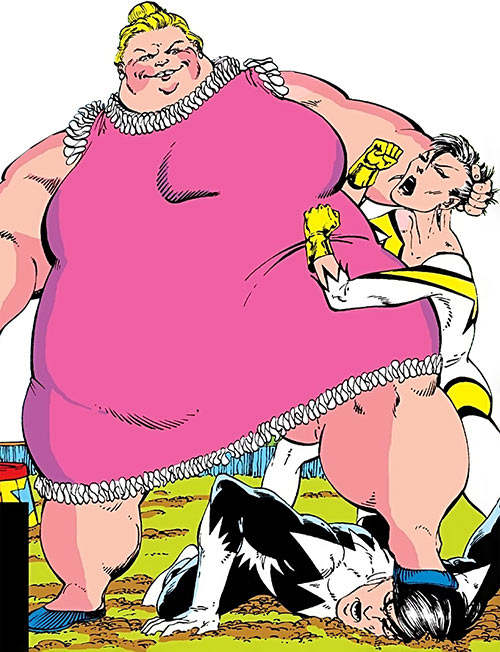 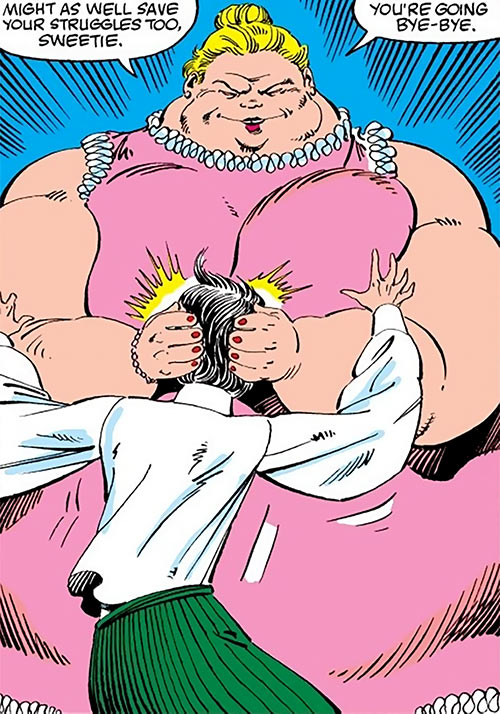 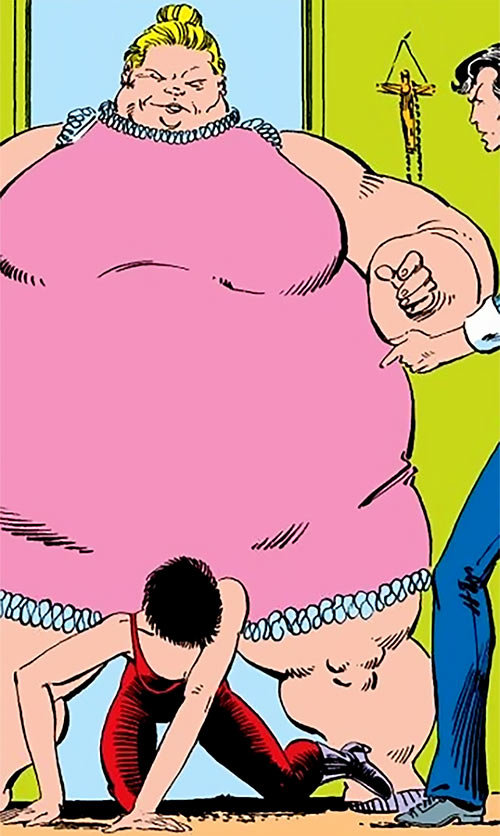