The Piper was an old school, minor villain.

His theme was the smoking pipe. He likely could discharge a variety of special smokes from his helmet, and was accompanied by a clique of enthusiastic, supportive small robots. These were shaped like humanoid smoking pipes, and could also emit various smokes.

The Pipes are the Piper’s robot pets. Those weird, completely black creatures look like smoking pipes with humanoid arms and legs. They seem fully autonomous. They are even capable of speech, and they can emit vast quantities of smoke and gas despite their small size.

The range of smokes and gasses the Pipes (and the nozzle on top of the Piper’s helmet) can discharge likely is broader that what little has been seen. He’s presumably about as flexible as similar early Flash (Barry Allen) villains.

The Piper was a typical Silver Age  costumed criminal. He became a villain, dressing up and stealing things, to deal with the stress of 80-hours weeks as a doctor in the accident and emergency ward. The Piper seemed mostly interested in releasing pent-up stress in a grandiloquent but generally harmless manner. 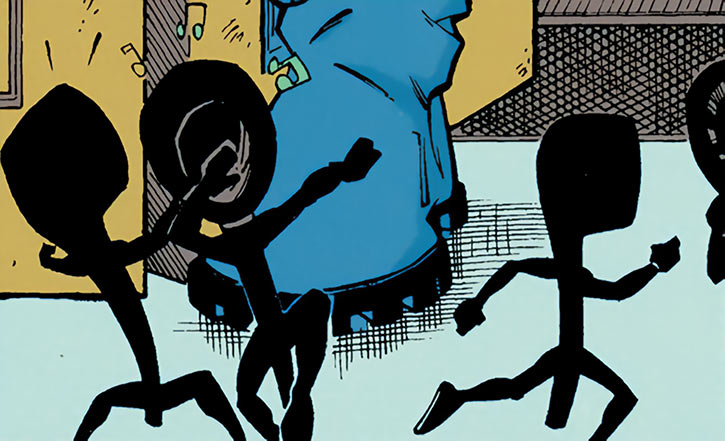 The Piper fought opponents such as the Elongated Man and the Atom (Ray Palmer). He claims to have scored victories against them. He always kept his secret identity safe, and thus was likely never arrested. So his victories were, at the very least, successful escapes from capture.

Dr. Falconer eventually came to the terrible city of Vanity. The depressing, mean nature of the town got to him like it does with everyone. He stopped being the Piper in the early 1970s as the Silver Age faded away.

(In 1996 the Piper is supposed to have retired ’ten years ago’, yet he is described as a 1960s villain. This profile assumes he retired in 1973 instead, since this year (the death of Gwen Stacy) is my usual delimiter for the end of the Silver Age.)

By the 1990s, a new breed of violent ’heroes’ emerged. While Dr. Falconer remained retired the rest of the Lawless Legion, his old super-villains group, was either dead or in jail. Falconer became terrified of the new generation of vigilantes, such as Bloodtype. He viewed them as brutes devoid of refinement or humanity.

In 1996, Falconer’s daughter was kidnapped. He was forced by the gang bosses of Vanity to rob the First National Bank.

The depressed, quivering, out-of shape Piper was confronted by the brutal Bloodtype, and did not stand a chance. His Pipes were mostly shattered, and he was slaughtered despite the intervention of a new hero, Aztek. As he was dying, Piper beseeched Aztek to rescue his 17-year old daughter, a popular student.

However, the gang-boss’s plan was a setup. In the commotion, a fake Pipe entered the bank and detonated near a ruptured gas main. This killed the Piper, Bloodtype and many customers.

Thus, the Piper never lived to learn the truth. The gang lord who had engineered his death was actually his own daughter. She had always hated him and had allied herself with Synth, a superhuman criminal. Mindy’s kidnapping had been a sham all along, and the death of the Piper a means to kill Bloodtype and take over Vanity’s gangland.

While the plan largely succeeded, Mindy did not survive her father by much. The intervention of Aztek and Green Lantern (Kyle Rayner) resulted in her accidental death at the hand of Synth.

The Piper smokes a pipe when he’s not in the field or at the hospital.

Falconer was a workaholic, unable to express his emotions even toward his beloved daughter. His marriage was cold, loveless and full of things left unsaid. His wife and daughter both realized he was the Piper, but they never talked about it. This dreary home life further pushed Falconer into his medical work or his release as the Piper.

As the Piper, he was an extravagant, bombastic villain with an array of non-lethal weapons. He was trying his best to be cool and greater than life to escape the general failure of his existence.

After he retired, however, he became tired and depressed. The city of Vanity nibbled away what little energy he had in his everyday life and filled him with fear. He still managed to put on one good show for a few minutes before Bloodtype caught him, though.

(During a bank robbery, to the patrons) “Consider yourself privileged, my friends ! What started out as an ordinary day has just become a story to tell friends and grandchildren ! ‘I saw the maestro at work today’, you’ll say. ‘I was robbed blind by the seditious sultan of smoke, the meerschaum marauder !’ And remember: this is the most interesting thing that’s ever going to happen in some of your miserable lives. So enjoy it, why don’t you !”

A new Piper is rather unlikely. So this writeup is mostly intended for documentary purposes. Or possibly for a late Silver Age adventure back in the 1970s or early 1980s, drawn by Carmine Infantino .

However, it is possible that as much as half of the Pipes survived the confrontation. Since they seemed to be sapient  (or at least to have a personality and full artificial intelligence), they may have struck out of their own, surviving in secret and scrounging circuitry to occasionally repair themselves.

Equipment:
COSTUME [BODY 05 — the nozzle on the helmet is very likely a gas dispenser similar to the one on the Pipes].

The piper at the gates of dusk

Before he retired the Piper had one more AP in DEX, STR, BOD, INT, INF and AUR. He did not have the Age (Old) Drawback, his Initiative was 015 and he usually had 050 Hero Points.

He also had a a Low Connection with the Lawless Legion, and was in good enough shape that he did not look stupid in Spandex.