Piranha Jones is a competent crime boss, capable of building lucrative criminal ventures from the ground up. He can be quite naturally persuasive, especially for people impressed by his vocabulary.

His teeth have been replaced by pointy steel blades. And he has no compulsion against actually tearing the throat or nose out of an opponent with a fierce bite.

Jones is also a strong, athletic man and a capable fighter. But he prefers to leave such endeavours and rely on excellent bodyguards.

Piranha Jones comes from a dirt-poor New York City neighborhood. By age 15 he had not teeth left, presumably because he couldn’t afford dental care. Yet he craved power and respect – to become the prince of New York.

He made a killing in crime, eventually heading his own mob. Likening himself to a ravenous and bloodthirsty piranha, he had his decayed teeth replaced by metal spikes.

Jones ran into trouble when he and his men (including his then bodyguard, “Cockroach” Hamilton) stole an experimental nerve gas from Adonis Chemical. They were opposed by Luke Cage, Hero for Hire, who derailed their plan.

The gas started to leak but was destroyed by Cage. However the resulting explosion allowed Jones to capture Cage.

Cage managed to free himself.  After destroying much of Jones’ luxurious penthouse, he rescued the criminal from his own piranha pool. Cage left him for the police to find.

However, Jones had an excellent lawyer. He wasn’t condemned. He then let the heat die down by moving upstate for years. In Stamford, he unexpectedly ran into the “Mafia princesses”, a three-woman suburban mob. They allied for a time.

However, this alliance disintegrated in 1992. The princesses outed Piranha Jones as a criminal, to bolster their rep at his expense.

Jones launched a complicated plan. He hired Terror, Inc. to kill him, but made it look like the client was the Mafia princesses mob. He then recorded this and other information on a video game cartridge. Once the cartridge’s content went public, his rivals would be destroyed. However, it was stolen. 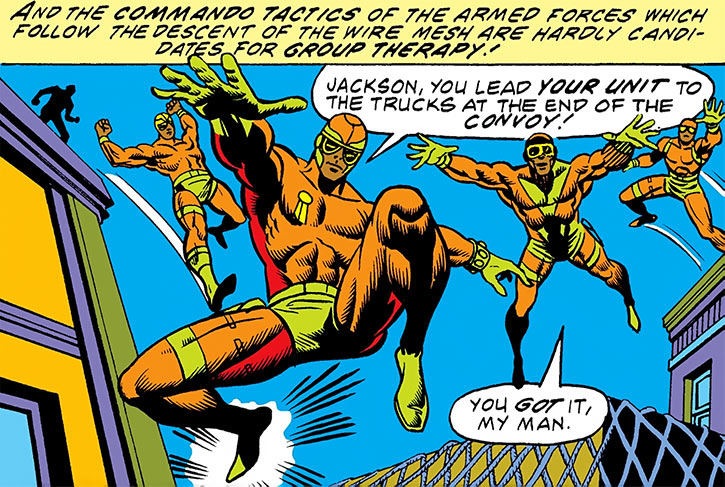 The elite agents used during the Adonis Chemicals heist.

Terror attempted to kill Jones by following the cartridge. He reasoned that Jones would be on its trail. The situation became even more explosive when the Punisher barged in, attempting to kill Jones himself for his criminal past. Terror would have none of it, wanting to honour his contract on Jones.

Terror saved Jones from others attackers. He even used a clever trick to convince the Punisher that both Jones and Terror had been killed by the vigilante’s attack. Terror then told Jones that he had deduced who had been his real employer.

Not wanting to be manipulated, Terror forced Jones to redraw the contract. Now the money went to a charity, except for a single dollar. Terror then honoured the contract by killing Jones and taking a $1 bill from the ex-crimelord’s pocket.

A number of old Luke Cage enemies show up in the 2016 run of Power Man and Iron Fist, including Piranha Jones. However, they come across as different characters. No-Prize Hypotheses to reconcile the two takes are of course possible, but it feels like missing the point.

(Or we can always pretend that it’s an odd side effect of the 2015-16 Secret Wars reality recreation. Or that these guys are really Earth-721 impersonators. You get the idea.)

This different version of Jones :

Jones will normally wear smart, fashionable, manly clothes. Although you may wish to conserve a 1970s flavour to him.

Piranha Jones really, really wants to be a James Bond villain – powerful, classy, smooth, rich, smart. He surrounds himself in luxury, and hires the best henchmen he can afford.

He uses his best pseudo-intellectual dialogue whenever he can. But although it impresses most people he works with, it is actually banal and empty.

Jones’ “I’m the boss, I’m in *control*” demeanour isn’t just an act. He’s genuinely tough and aggressive. He’s also very difficult to scare – although he can get frustrated.

“Easy ‘Roach, easy. Let us not act so emotionally. We may have need of an hostage, since it’s evident we must retreat.”

Jones will normally have an aquarium with piranhas in it build in his house. It is usually under the floor with a motorized sliding panel, so he can throw people in it.

Being plunged in that tank acts as Claws: 06, attacking every Phase. Piranhas, however, will usually only attack something that is bleeding, and it normally takes a Phase for them to react (unless the target is soaked with blood). They will ignore any Partial defense. 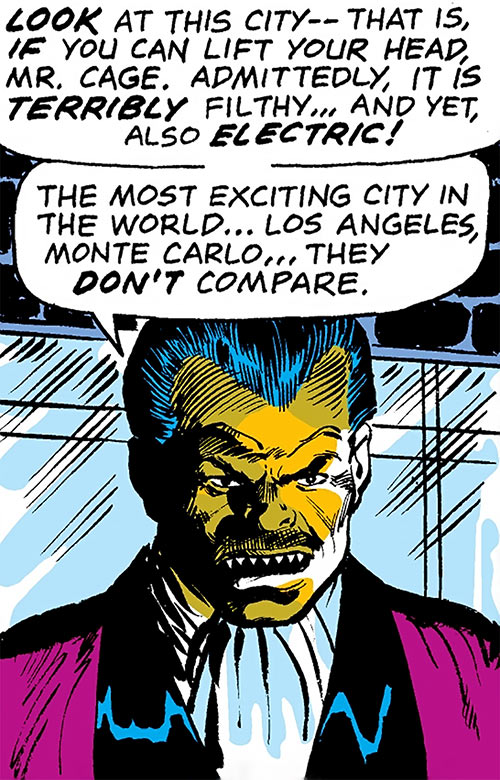