A water-breather, Piscator is at home in the water. He has even gone toe-to-toe against Aquaman (briefly). He’s also telepathic.

Dressing like a gladiator, Piscator is skilled in the use of his weapons, a trident, a net, and a short sword.

A Janissary, or mercenary working in the Middle East, Piscator was hired by Qurac. He was to support their Jihad group in its attempt to free President Marlo from US military prison.

The operation unfortunately ran afoul of the Israeli Hayoth, plus the Suicide Squad, plus Batman, Superman, and Aquaman. Piscator found himself facing Aquaman, and despite getting in a few hits he lost and ended up in custody.

Piscator has flaps of skin extending between his arms and ribs. They don’t appear to have any functional use (although may help him in swimming), but could make it awkward for him to wear normal clothes.

Piscator enjoys fighting worthy opponents, an opportunity his role as a mercenary occasionally affords him.

He doesn’t seem overwhelmed by a need to face opponents honourably, though, and if the job requires him to capture and drown an opponent before they can raise the alarm, then that’s what he’ll do. 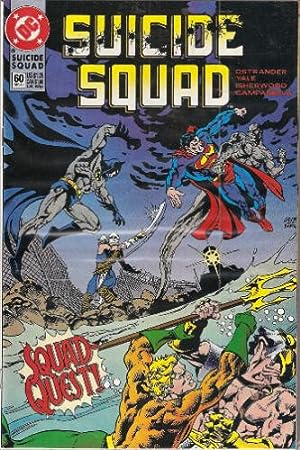