The Pit Bulls appear to be four youths (aged maybe 16) who have been conditioned to fight since birth. Furthermore, they have been imprinted with dog-like behaviour, instincts and reflexes. The subjects were apparently kept in cages.

The origin of this monstrous project is unrevealed.

The Pit Bulls all have dog names. The blond male is Butch, and is the pack’s alpha. The girl is Queenie. The larger male is Spike. The fourth member is Duke. 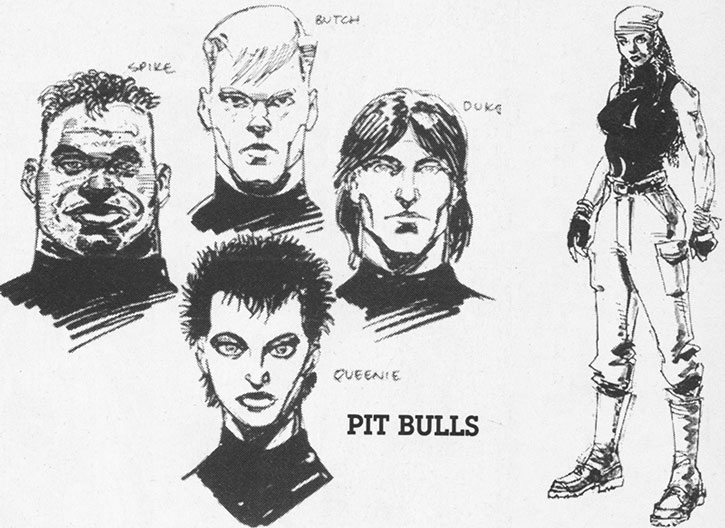 On the right : Anita.

The Pit Bulls’ mistress — in the sense that dogs have masters — is one Anita. Her identity and role are unrevealed.

One vague hypothesis is that she was some sort of instructor with the Pit Bulls project. Maybe she ran away with the kids. In any case she continued to run the Pit Bulls through training drills, and usually wore paramilitary clothing. A secondary source indicates that Anita has some sort of emotional tie with Butch.

Anita arranged to house the pack in a clandestine loft in the city of Arcadia, in a warehouse on the docklands. She has a working relationship with the Arcadian Police Department. Yet, one gets the strong impression that it is limited to one officer (Lt. Timothy) and that it is off the books. Other officers of the APD did not seem to know who the Pit Bulls were.

In 1993, Lt. Timothy called Anita, asking for a favour. The vigilante only known as X had just murdered a politician and a corrupt cop, and needed to be stopped.

Minutes later a TV crew spotted X using construction equipment to appose his mark on a building. The Pit Bulls engaged him in hand-to-hand combat to capture him.

Despite X’s impressive strength and fighting skills, the Pits were performing well. But the combatants were soon surrounded by the SWAT team. Commanded by one Gault, this unit was infamous for behaving more like an occupying military force than as police officers.

X seized the occasion to escape, and Gault threatened the Pit Bulls with death. The threats and the perspective of being put back in cages triggered the quartet’s reflexive aggression. They attacked and mauled the SWAT team. Since X had gotten away, Anita had them withdraw before they’d kill someone.

Not too long later, an untouchable police detective called Wellman asked Lt. Timothy if he could have help from “the dogs” to arrest a superhuman gangster. Anita agreed to have her pack help with the arrest. 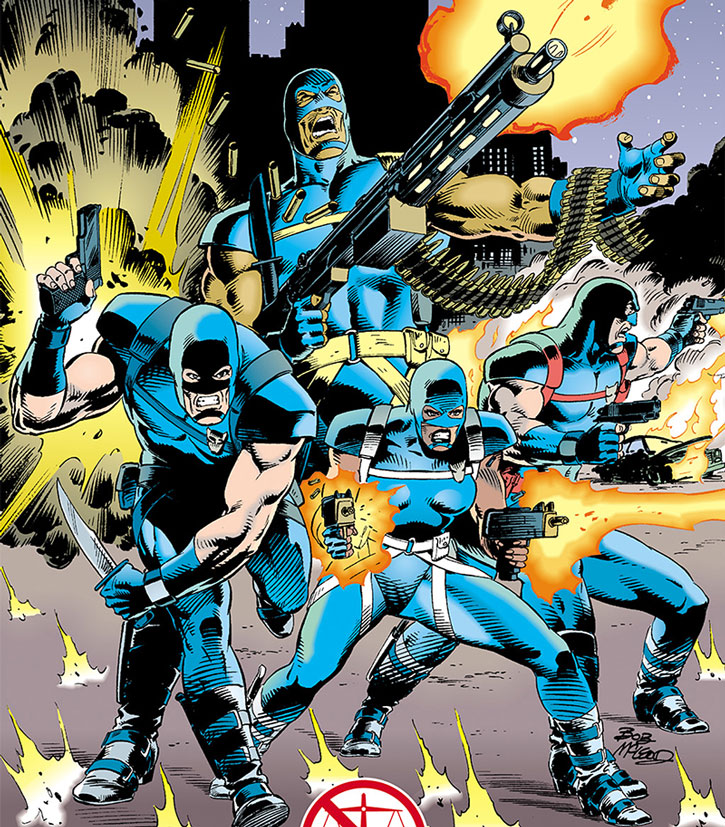 As it turned out the suspect was with two other superhuman criminals. These reacted violently when Wellman came in, and the Pit Bulls immediately attacked. They took down the suspect and killed a heavily-armed giant. The last criminal downed Queenie with a vibration blast before Detective Wellman shot him dead. Queenie quickly recovered, though.

The Pit Bulls then helped Detective Wellman escort his prisoner to Internal Affairs outside of town. Once there, he would testify that Wellman’s superior Captain Pike was thoroughly corrupt. However, Pike hired a number of very minor superhuman criminals who had fled the gang war in Steel Harbor, who intercepted the van.

The Pit Bulls were outmatched, but X came in and killed most of the opposition. This included Captain Pike after he ordered the death of one of Wellman’s daughters to have him back off.

Everybody was street fighting

Some weeks later, X found himself chased by powerful police cyborgs. Attempting to shake them off, he led them straight to the Pit Bulls’ covert warehouse base. X then shot Spike to trigger the Pit Bull’s aggression response.

X got more than he bargained for. Their return fire mangled his spinal column. This deprived him of the use of his legs for several hours as his regenerative powers repaired the damage.

As X had hoped, the cyborgs identified the Pit Bulls as threats and opened fire. The youths returned fire with grenade launchers. They destroyed two of the three cyborgs, but only Duke was left standing. He charged the last cyborg and decapitated it with a grenade.

The police found the Pit Bulls out cold but not seriously wounded thanks to their reinforced uniforms. What happened next is unknown, as the team wasn’t seen again.

Though they are young, the Pit Bulls are extensively trained in melee and ranged combat. They are in terrific shape, and possess a remarkable level of strength, aggression and pain tolerance. 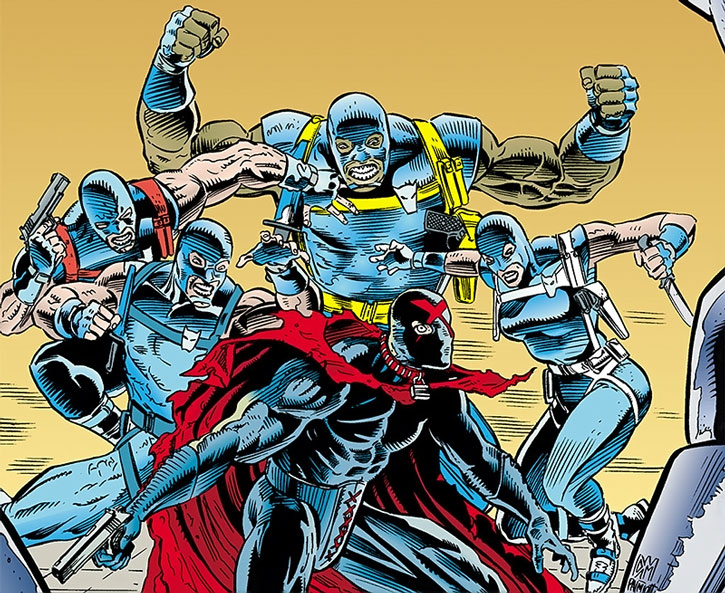 They remain human, and do not operate on a super-heroic level. Still, they have a fair chance to take down most street-level costumed adventurers, in good part because they work as a pack (in DC Heroes terms, they use Team Attacks a lot).

The Pit Bulls are usually armed like a SWAT team or a military commando (not that there’s much of a difference anymore). But if they are sent to capture someone they will probably engage with their bare hands. Their uniforms are high-performance soft body armour. It doesn’t lessen the force of an impact, but it will prevent even a high-calibre round from actually penetrating.

The Pit Bulls seem to be fast healers, and are able to return to action quickly after having been taken down.

Generally, Duke and Queenie prefer to close in (with Queenie using a knife) while Butch and Spike open fire.

Though they aren’t radically more competent than an elite Special Forces team, the Pit Bulls have a number of advantages :

The Pit Bulls are better approached as very smart dogs than as people. They are still young and thus may eventually become more human-like. One secondary source lists Butch’s personality as that of a German Shepherd, Duke’s as a Doberman’s, Queenie’s a Rottweiller’s and Spike’s St. Bernard’s.

Butch is the pack alpha, and the others reflexively obey him. The same level of instinctive obedience isn’t present toward Anita. But Butch treats Anita as his mistress, so she will talk to him to give orders to the pack. 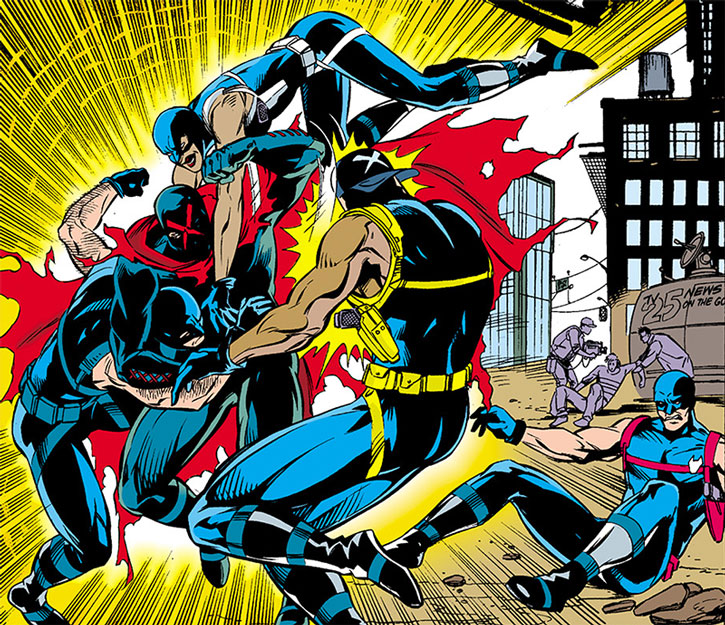 In terms of intellectual sophistication and emotional maturity, the Pit Bulls are the equivalent of young teenagers, maybe 14, though on the rowdy side. For instance, when first seen Duke and Spike got into a vicious brawl since Duke wanted to wear Spike’s baseball cap.

They are simple kids with simple interests and a serviceable vocabulary. But they are not intellectually impaired. This is a normal product of a very toxic and limited life experience, aggravated by their pseudo-canine instincts getting in the way.

The Pit Bulls (or at least Queenie) don’t seem to like strangers. They may just snarl or growl when approached by one. They also become uncomfortable when they’re not together.

The webbing on the Pit Bull’s uniforms is of a different colour, presumably to avoid fights as to whom own which. Butch’s are dark blue, Duke’s red, Spike’s yellow and Queenie’s white.

There was non-trivial variation in skin tones depiction. But Spike is apparently African-American, Butch and Duke Caucasian, and Queenie… has been everything but Asian, so let’s assume that she’s morena in the Brazilian Portuguese sense of the word.

Standard urban assault uniforms (think Rainbow 6) might work than the superhero-ish costumes, though.

Drawbacks:
The Pit Bulls have been imprinted with dog-like instincts, and do not function like normal human beings.

Soft body armour ● 2 points (Removable) ● Descriptor: Ballistic cloth
– Protection 1.
– Feature (the armour will prevent reaching a Dying Condition as a result of an attack with a Damage of 6 or lower), Subtle.

As usual with writeups.org DCA stats, these stats are not benched against the extraordinarily high stats for stock NPCs such as generic SWAT officers. 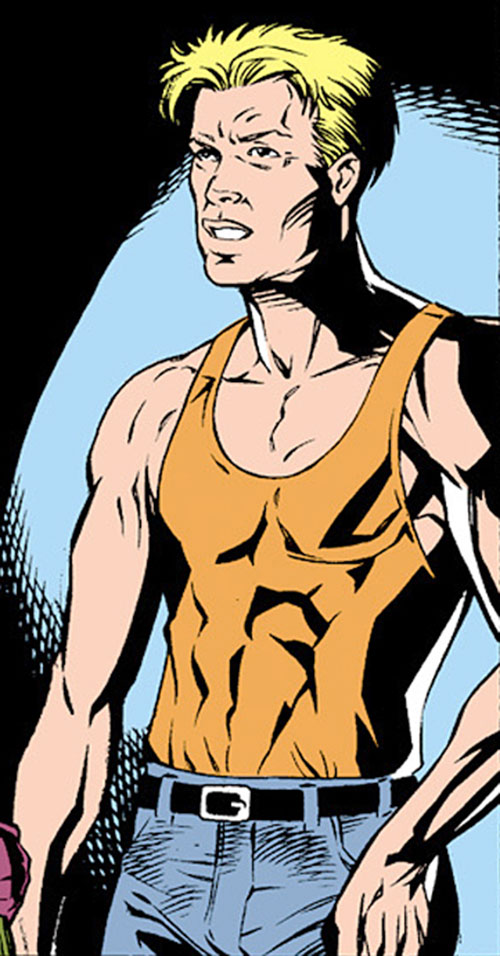 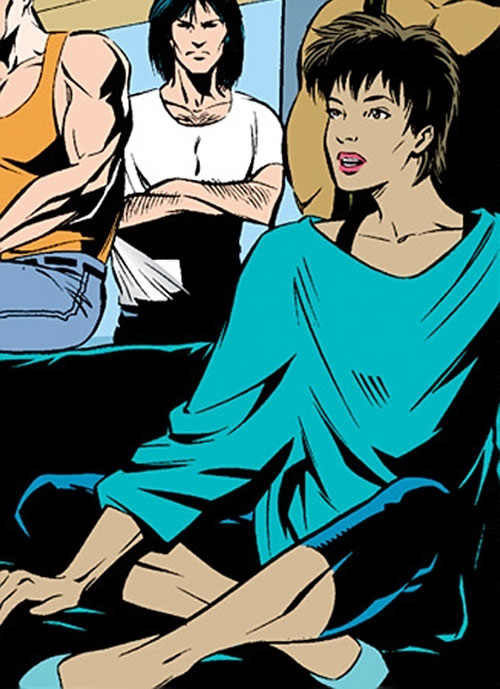 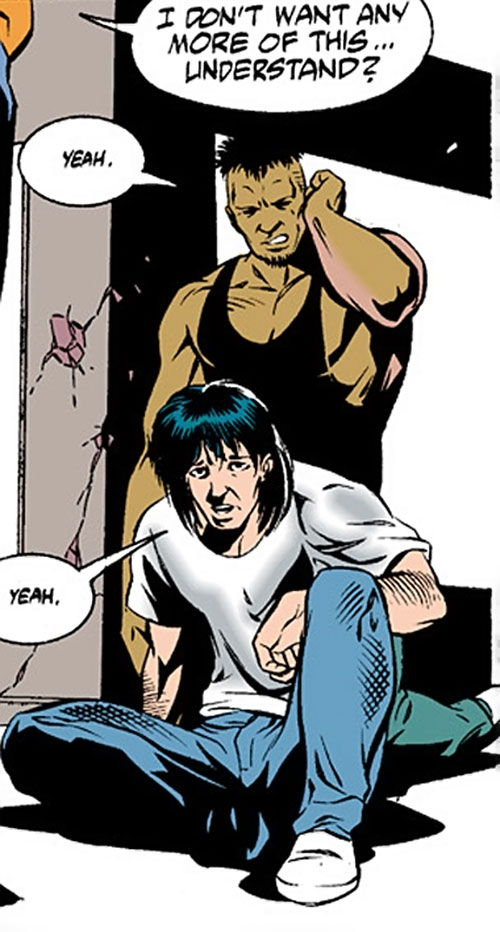 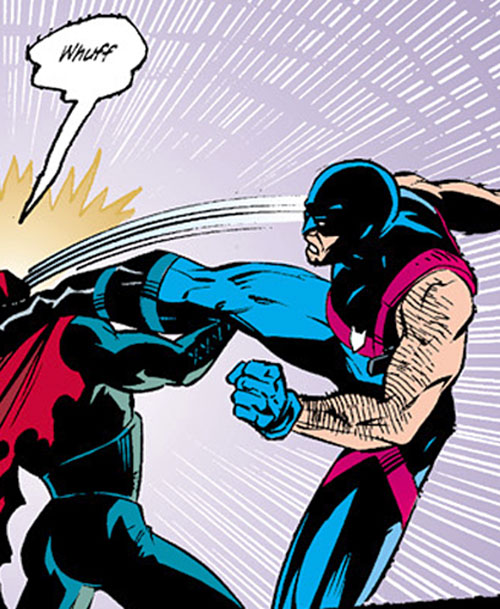