“Heat can evidently be a cause of motion only by virtue of the changes of volume or of form which it produces in bodies.”
– Sadi Carnot

This is inspired by my Guild Wars 2 engineer, who’s now a flamethrower/hammer scrapper.

So she’s a lagomorphid techno-gnome mum with a big-arse flamethrower and a burnt orange Minnie Mouse afro. That’s the concept.

Pixxel’s biography deviates slightly from the Personal Story questline, since she’s older than the typical Player CharacterRPG characters played by a player, rather than the gamemaster or the computer.. Still, there are S P O I L E R S for said questline.

(The name is a reference to an obscure World of Warcraft goblin NPC  . Because I liked the delivery on her lines back in 2005-ish.)

Unless you know GW2 well, this profile should be read after the Zojja character profile. Which presents a bunch of context.

Pixxel is a lead researcher – or, in Asura parlance, a “genius”.

Her core expertise is akin to thermodynamics and engineering-applied thermodynamics. But it’s “weird science”, with a lot of magic involved.

She’s led a succession of krewes (research teams). But most of the time she works as a consultant for other krewes.

She’s quite often brought in to handle issues with heat dissipation, or to increase electrical conductivity. 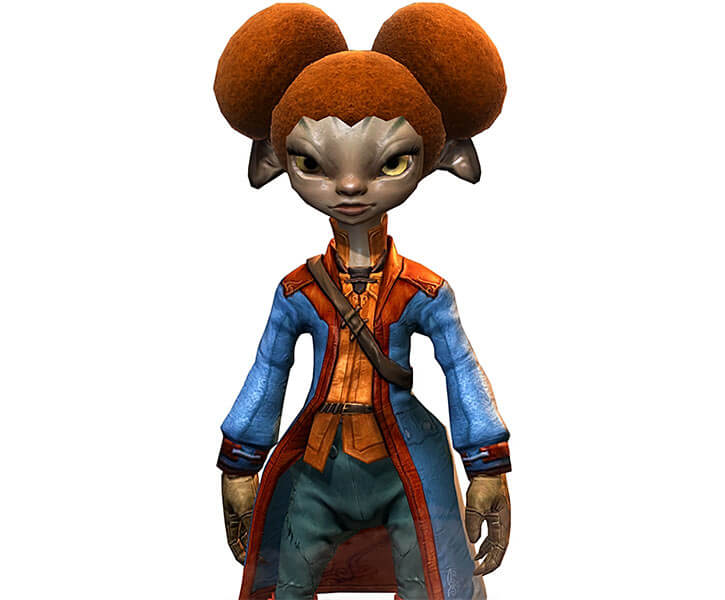 Invented by a mom!! The doctors don’t want you to know about this!!!

When it became necessary to go into the field, Pixxel reluctantly repurposed a cutter power suit. This is an armoured exoskeletonStrength-enhancing motorised frame worn around the body and limbs normally used to perform heavy welding and soldering work in difficult conditions.

It’s not really built for strength. It’s more about carrying weapons/ammo and protection.

(These weapons approximate a rifle + flamethrower kit gameplay. I brute-forced my way using these for a good while. The bombs kit, which I eventually switched to, is more efficient. But it relies on video game logicStuff that only makes sense within a video game). 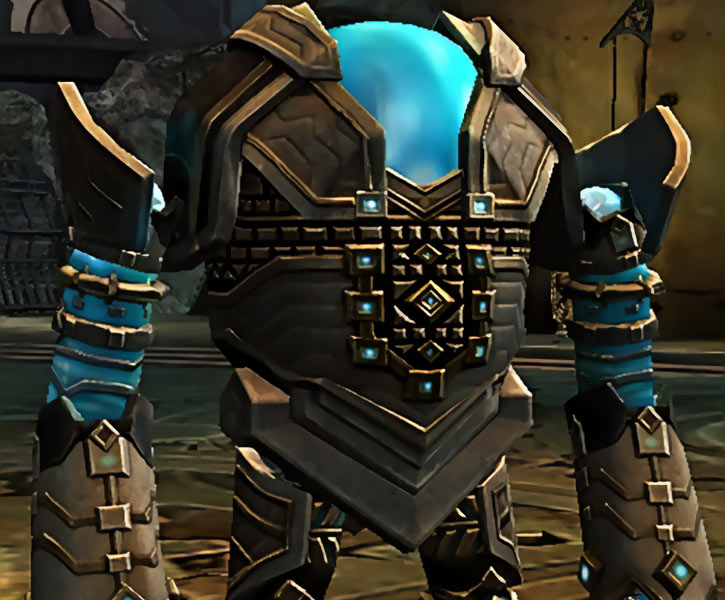 Asuran power suit – same general model as with the ROPADOPE.

It is an armed, armoured power suit and about 6’8″ (2.03m) tall. Pixxel rides in the head. It is escorted by several floating grizwhirls. This thing is going to be a beast.

(This corresponds to when I was working my way toward the Scrapper elite spec.)

I’ve been upgrading my Daft Punk to .flac recently. Therefore, the choice is obvious…

Well, unless you’re me and spend 10+ minutes wondering whether it’s the original, or Peaches’ “No Logic” electroclash cover , that’d fit best.

For much of her life, Pixxel simply was a notable, if boring, researcher.

Her speciality was thermodynamics. But she was more interested in theoretical research than in applied engineering. As can be surmised, she was a College of Statics graduate.

This limited her opportunities to join high-profile krewes. On the other hand, she leveraged that to find work as a consulting expert.

One of her recurrent clients was Snaff, years before he was hailed as a groundbreaking genius golemancer. They worked well together, and Pixxel’s thesis advisor Master Bronk had been Snaff’s friend.

Snaff usually had Pixxel conduct several short engagements for him every year.

It greatly streamlined a previously marginal arrangement, the motherkrewe. These were small collectives of parents (almost always women) organising to raise their children.

With Pixxel’s invention, applicants would hand-punch a card (using their claws). These indicated key Asura metrics such as IQ and academic qualifications. A sorting machine would then logically group applicants’ cards in clusters of seven.

Once a motherkrewe was agreed upon, each member would take one day off a week to run preschool or after-school activities for the entire motherkrewe’s progeny. Other activities depended upon which of the pre-written, modular contracts had been agreed upon.

Pixxel raised both her sons as part of a motherkrewe. Her first son’s motherkrewe also included a little girl named Zojja.

Pixxel also invented the Transatmospheric Convertor. It manipulated the local air’s heat to change the weather. The prototype was a success, but the lack of funding meant that its effects were very local.

Still, there were enough sales to rich people and high-end farms to recoup costs. It even financed her next invention – the ANTENA (Ancient Numinous Thaumaturgic Emanation Noticer and Analyser). It applied the principles of thermal imaging to detecting lost sources of magical energy.

The first apprentice, Kudu, had gone rotten. He was an early recruit for the Inquest, and convinced them to share his vendetta against Pixxel and Zojja.

(The Inquest is a sort of evil Asura quasi-corporation. Though they’re a relatively recent creation, it rocketed to considerable size and prominence. The Inquest is one of the few examples of a large-scale Asura social construct.) 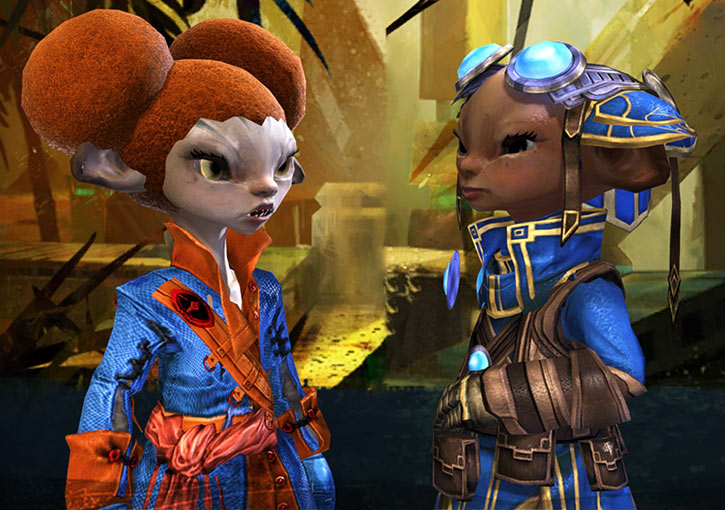 Snaff then died. This was during an heroic attempt by adventuring super-group Destiny’s Edge to stop one of the Elder Dragons.

Heartbroken, Zojja set up an annual Snaff Prize engineering contest so he wouldn’t be forgotten.

Along with the krewe helping her build the ANTENA, Pixxel entered this competition. Though other competitors presented such wonders as the Massively Impressive Golem or the Floating Grizwhirl, the ANTENA won.

Zojja eagerly voted for it, wanting an old Snaff collaborator to be the first Snaff Prize winner.

Pixxel was thus now allowed to bear the title of Snaff Savant.

But the competition had resulted in another clash with the Inquest. Discussing the matter, Pixxel and Zojja decided to work more closely together. So they could better defend themselves against Inquest harassment. 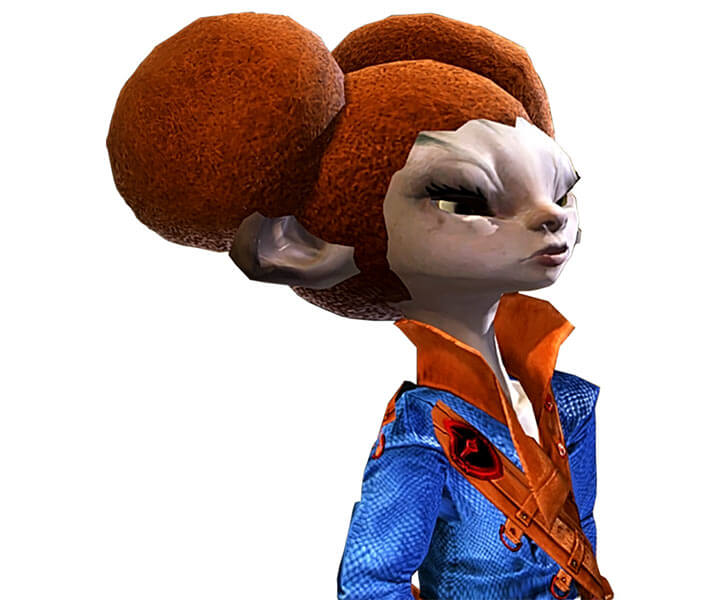 An Inquest krewe indeed stormed Pixxel’s lab. They were repelled with the help of security golems loaned by Zojja.

But Inquest senior agent Teyo threatened to collapse a cliff onto nearby houses. This forced Pixxel and krewe to hand over the first artifact that the ANTENA had located.

Pixxel and Zojja then teamed up. They used the ANTENA to beat the Inquest archaeologists to a series of buried artefacts. Then to locate the artefact Teyo had stolen, repossessing it and killing Teyo.

Songs in the key of Gadd

When combined, the artefacts formed a key to the sealed lab of legendary dead genius Gadd.

Zojja and Pixxel vanquished the ancient automated defences therein. They thus discovered a lost Gadd invention – a field that could hold Destroyers at bay.

(Destroyers are agents of one of the Elder Dragons, Primordus. Primodus was responsible for the destruction or exile of many underground sapientCapable of intelligent reasoning species, including the Asura.)

Kudu pettily struck back by stealing the plans of the Transatmospheric Convertor. And setting fire to the all-important patents archive, so the IP theft couldn’t be proven.

Furthermore, Kudu repeatedly managed to escape defeat at Pixxel and Zojja’s hands thanks to his teleportation belt.

Kudu then set up a demonstration of “his” invention for the Council of Rata-Sum – the Asura sort-of-government. But it was obvious that he would use a weaponized version of the Transatmospheric Convertor to drown the Council.

Pixxel and Zojja but narrowly prevented this.

However, this incident made it clearer still just how much influence the Inquest had. The Council covered for them even under such circumstances, to avoid a political campaign that would deprive them of their seat.

Zojja and Pixxel were on their own. 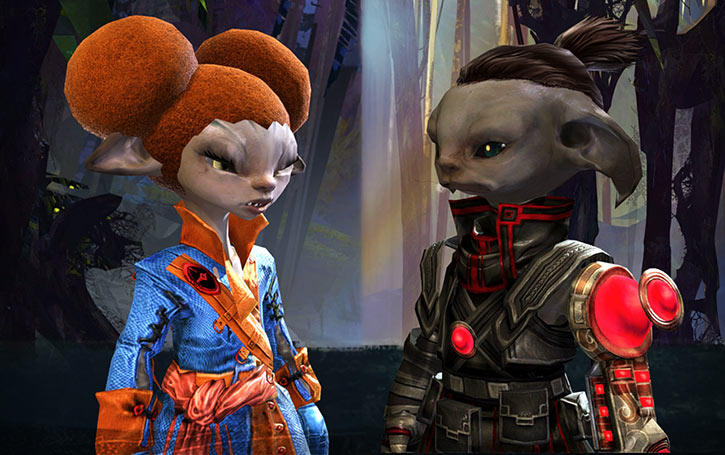 But Zojja had greater worries. As a former member of Destiny’s Edge, she was well aware of the Elder Dragon threat. Compared to worldwide extinction, the Inquest didn’t seem that important.

She backed one Professor Gorr. His maginamics research had led him to the conclusion that Elder Dragons were devouring magic.

However, not long after Zojja introduced Gorr to Pixxel, the professor was disappeared by the Arcane Eye – Rata Sum’s secret police.

Zojja and Pixxel managed to free Gorr, ally with the Priory of Durmand, and fund field experiments that proved Gorr’s theory. Then to sidestep the Arcane Eye by having an impromptu scientific conference where Gorr presented his results.

(The Priory of Durmand is a sort of international academic centre. They research facts about the Elder Dragons, and means — chiefly technological and/or magical ones — of opposing them.)

(The Priory sometimes works with two other international organisations – the Order of Whispers (an intelligence agency) and the Vigil (a military corps).)

However, in doing so they discovered that the Council already knew that Gorr’s theory was correct. They had previously suppressed this inconvenient truth so business could continue as usual. 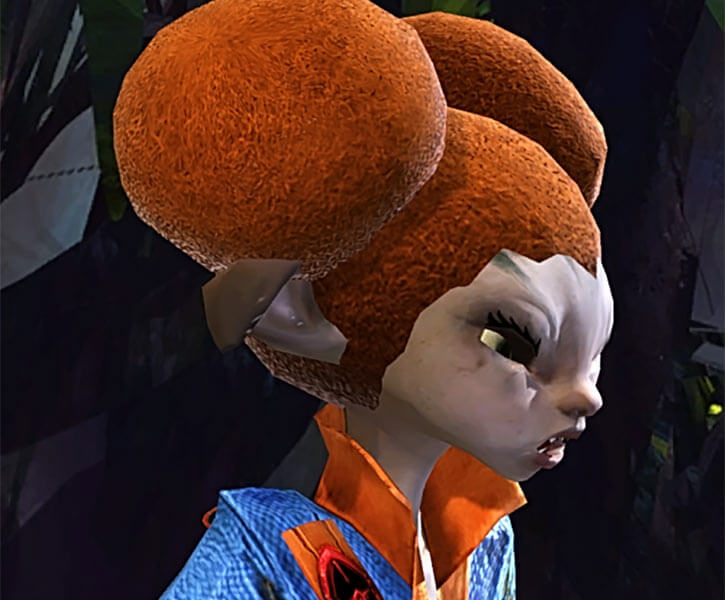 Embittered by Destiny’s Edge failure and Snaff’s death, Zojja had decided to work on her own against the Elder Dragons. But that meant that she needed new allies. And she had noted that Pixxel had a good rapport with several Priory agents.

Zojja asked Pixxel to join the Priory, and be her liaison with them.

Pixxel wasn’t enthusiastic about this. But the global threat from the Dragons was clear. And the Inquest was still after them both.

Pixxel thus reluctantly agreed to take up arms for good as a special agent for the Priory. But she would need more firepower than her kludged-together ROPADOPE suit.

She broke out a bunch of her old notes about thermodynamics-based weapons, and Zojja gave her one of her experimental power suits. The combination would eventually become the H.E.A.T..

This 80-second video presents the basics about the Asura.

By Human standards, Pixxel is in her early 40s.

She’s task-focused, and most of her work — and thus her life — has been about raising kids and physics research.

She’s not the flashy, loud type like Zojja. Her interest is more about solving problems through thorough study.

Pixxel still can do the Asura biting rejoinder thing. But that’s when she’s irritated, not as her standard mode of expression. Serious lady no swagger.

Rise to the occasion

That Ms. Pixxel ended up in the field, piloting a flamethrowing mechaSome form of cool sci-fi super-vehicle or super-robot, is very much uncharacteristic. But she understands the existential threat posed by the Elder Dragons.

And the unrelated Inquest harassment would have forced her tiny clawed hand anyway.

Since institutions are more interested in maintaining the status quo than in global survival, Pixxel considers that she has no choice but to act. Otherwise, there might not be much of a world for her sons — or anybody’s children — to inhabit.

Her new life mostly involves working with younger people, with more field experience than her. But Pixxel’s sharp, analytical brain is rapidly catching up. And her dispassionate, rational, analytical approach is now working with enough data to reach efficient conclusions. 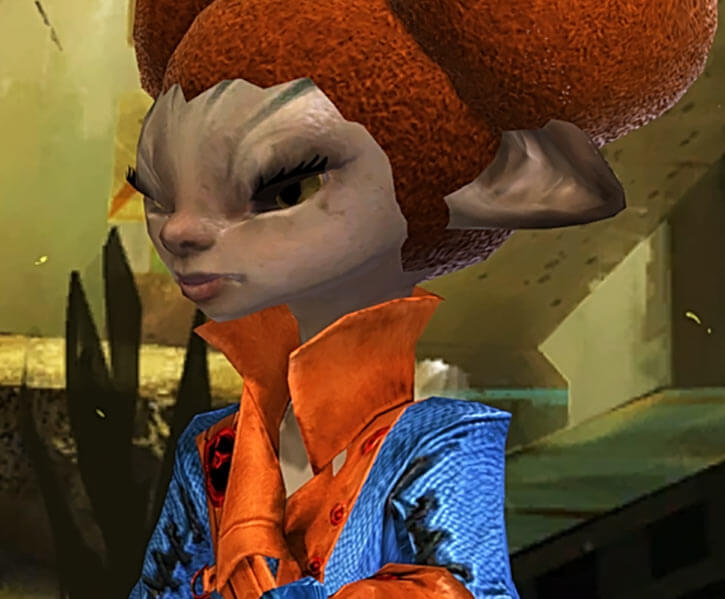 Pixxel is one of Zojja’s few friends, though their friendship was defined by their work with Snaff.

She has been around for the bulk of Zojja’s life. Pixxel and especially Snaff were the sole islands of consideration and respect in Zojja’s life.

Pixxel has generally served as a moderating influence. Zojja is a genius, but she’s emotionally immature and constantly risks burning herself out. Pixxel has a semi-maternal interest in not seeing Zojja go off the deep end.

“That’s my invention, Kudu. You’re no genius, you’re a derivative thief. And you dress like a ninny. Tell your tailor that other colours exist.”

“With respect, Councillor, you’re a buffoon. If Zojja and I hadn’t stopped Kudu…” 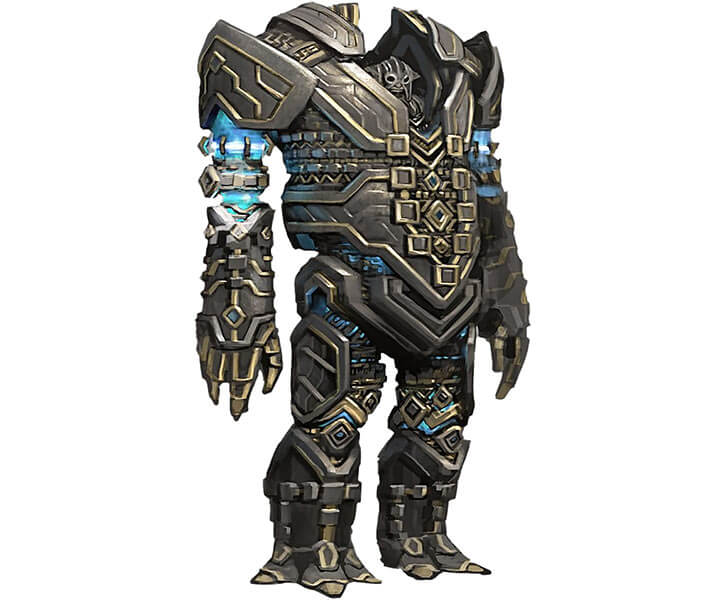 Asuran piloted golem/mecha – same general architecture as with the H.E.A.T.. 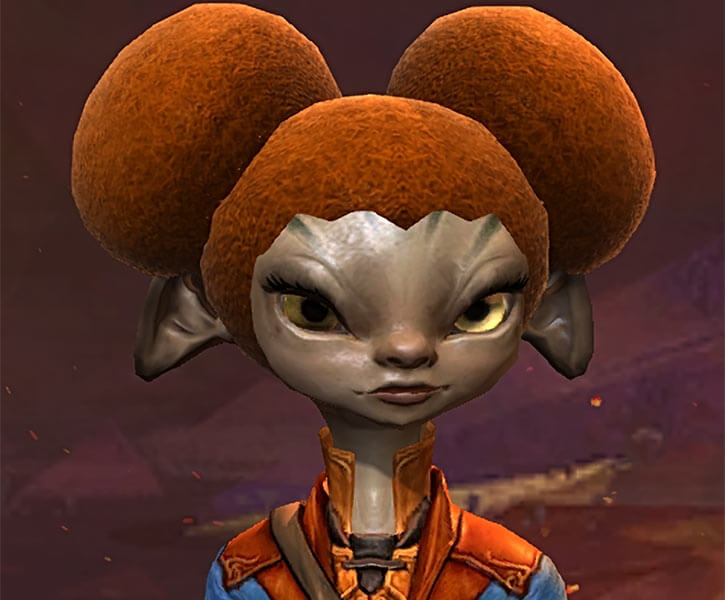 I’m still using the power scale that was based on the *novel*, rather than the game. This was explained in the Eir Stegalkin entry.

I’m ill-suited to the “pianist” gameplay, so my Engineer playstyle is simplified and suboptimal. This is reflected in the flat, unimpressive stats for the ROPADOPE. And the narrative conceit of the character being reluctant to take up arms.

The shift to the HEAT unit — shortly after this writeup ends — also corresponds to me getting better at mashing keys between the hammer, the flamethrower, the tool belt and the utilities oh my.

Source of Character: Based on a Guild Wars 2 Player Character.