Poison has retained from Ylandris a number of otherdimensional  disciplines, giving her superhuman powers. She can “become steel” and “make the steel float”. Which in practice means :

When she flies she stands perfectly vertical, with her arms pressed against her sides. She usually levitates straight up until she reaches the desired altitude, then starts moving around. This odd flight is perfectly silent. Thus, she can often land lightly and undetected behind people.

Poison’s moves are fast and precise, and she is amazingly perceptive. She moves with great economy, fighting with so few unneeded movements that she almost appears to stand still. Even dodging bullets will likely be a single side step. Against people trying to rush her she stands still, letting them crash against her unmoving body then brushing them off.

Cecilia was a young Cuban girl. In 1979, she fell in love with a handsome Russian diplomat named Vassily. They had a passionate relationship for several months, resulting in a pregnancy. When the authorities asked Cecilia about the father, she naïvely told the truth.

To protect himself, Vassily claimed that Cecilia had seduced him and asked money for favors. He was sent back home to Leningrad. Meanwhile Cecilia, still pregnant, was imprisoned. Due to the poor conditions, she soon contracted a fatal sickness.

She would have died, except for an alien warrior named Ylandris. Having fallen from her dimension , Ylandris needed a corporeal form to survive on Earth. Cecilia agreed to allow Ylandris to bond with her. This saved Cecilia, Ylandris, and Cecilia’s unborn child.

In 1980, Cecilia was shipped to America as an undesirable during the Mariel boatlift . She was still pregnant by that point.

Cecilia eventually made it out of the refugee camps. She found a job as a housekeeper at a Miami hotel to support herself and her newborn son. But Ylandris, still a warrior, craved battle. Cecilia agreed and allowed Ylandris to use her body to fight evil. They did so as “Poison” – a translation of “Ylandris” in English.

Her alien nature attracted the attention of the High Evolutionary’s Purifiers. These troops sought to destroy her, but she defeated them.

Poison then made her way to the Nexus of All Realities, whence Ylandris returned home. But the alien left some of her power to Cecilia as her thanks. And thus, Poison still stalks the streets of Miami. It is also possible that her son Carlos was affected by the extradimensional energies.

Cecilia is an undeniably attractive woman, but gives off a strange and threatening vibe.

Poison is a superpredator – she preys on those who inflict emotional pain. Thus, what interests her is different from what mobilise other vigilantes. She goes for “human interest” cases. Poison drifts around the city, sensing pain and desperation. She then approaches the victims to understand what is going on and, if necessary, act.

Cecilia was forged by a warrior from a superior dimension, and severe hardship. She only relaxes when in presence of her son, with whom she has a normal, playful rapport. She comes across as weird and dangerous the rest of the time. Her gaze is too intense and her non-verbal communication is slightly off, rigid and too disciplined.

Peter Parker called her “the human branding iron”. Despite the lack of danger Poison posed to him, his spider-sense was tingling like mad.

Poison is calm, disciplined and extremely confident. She approaches people who have suffered emotional abuse, and gauges whether justice is necessary. She cannot stop being Poison, as she needs vicarious revenge far too much.

However, juggling between her miserable job, her time as Poison and being a mother is hard, especially due to lack of sleep. And Carlos hates it when his mother goes out at night without any explanation.

Poison is devoid of mercy for those who inflict great, unneeded emotional pain. For her, there are no excuses. She also prefers to savour this vengeance. Frex she’ll inflict nightly terror on her target, slowly breaking them until retribution runs its course and she moves on to another case.

In some ways she perpetuates the cycle of abuse, inflicting what was done to her to more deserving targets. At first, Ylandris tended to have Cecilia see everyone as Vassily to keep her resolve fresh. But that gradually faded after the higher-dimensional warrioress left.

“ I am the price of pain. I am the penalty you pay for inflicting all love’s cruelties. I am Poison.”

“Poison is a warrior. Cecilia Cardinale is a mother – with responsibilities. I do not know which part of me is more real. It is like asking which is greater, my love for Carlos – or my contempt for his father’s cowardice. Each make me stronger. Each make me stronger. But only my love matters to Carlos. This I never forget. No. That is not true. I do sometimes. When my attention is most centered — as I was taught by the warrioress, Ylandris — I forget nearly everything. Except whatever must be done to beat the enemy. Otherwise, I would die.”

“I can drive my fingers straight into your skull. Is that necessary, or are we finished ?”

“Come with me. Tell me your story. Poison can take the pain away.”

Peter Parker : “You, uh, seem young to have a school-age kid…”
Cecilia : “Thank you. I forget sometimes. I am young.”

Bonuses and Limitations:
Once Poison decides to avenge the pain done to someone, her Empathy becomes a permanent empathic link with the person, with a special +10 Range bonus. That lasts until either the person is dead or vengeance has been gained. This is considered to be a 0-pts misc. Advantage/Drawback.

Bonuses and Limitations:
Thief (Stealth) is considered a Power, is Contingent on Flight, and can only be used while in Flight (-3).

Back when she was hosting Ylandris, a warriorress from an higher dimension, Poison was more powerful. Use the following values :

This writeup is entirely based on her appearances written by her creator, Steve Gerber. I am leaving out the unexplained changes introduced in Peter Parker : Spider-Man #64, namely : 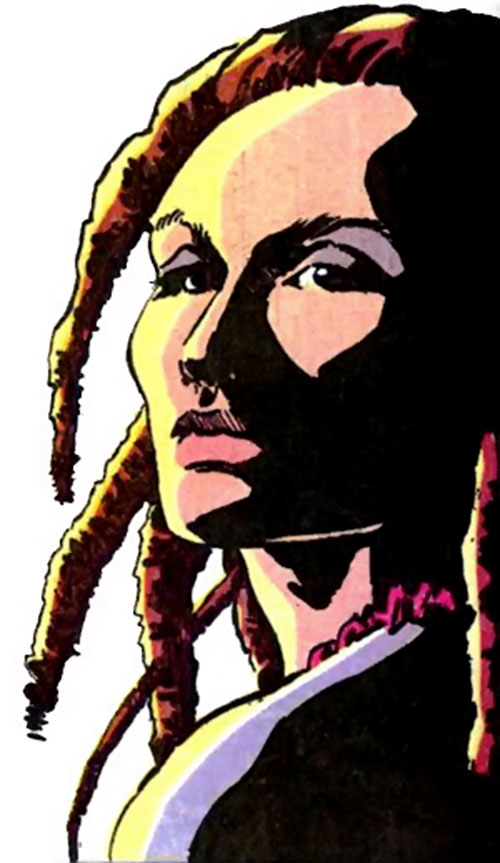 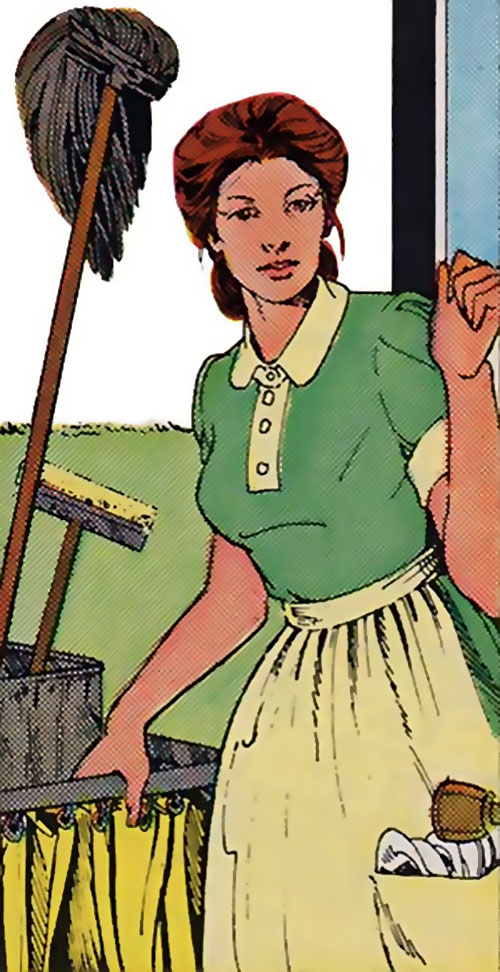 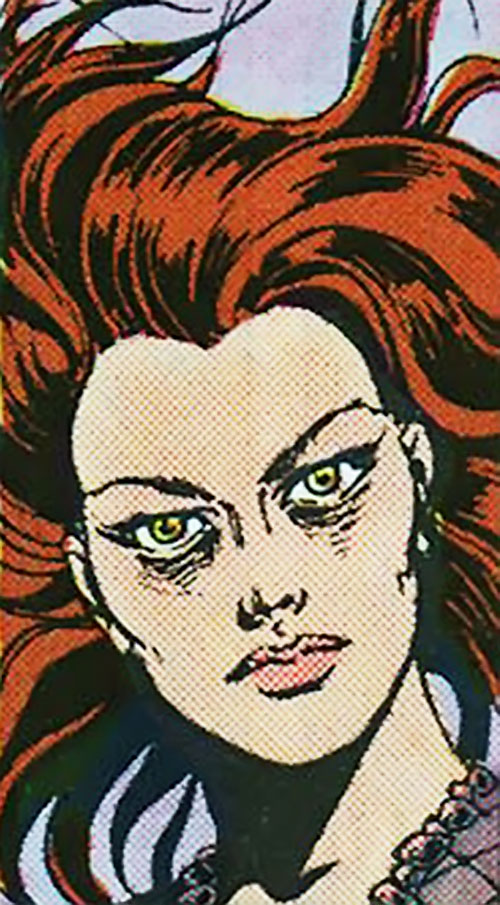 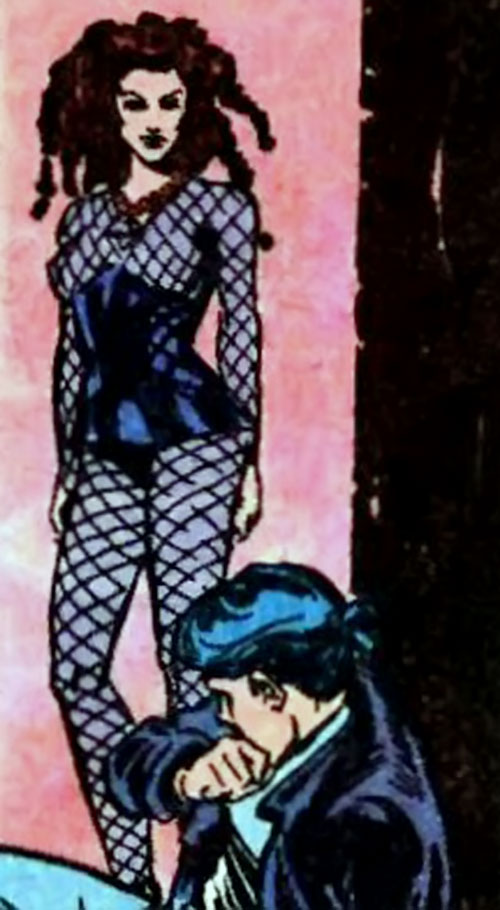 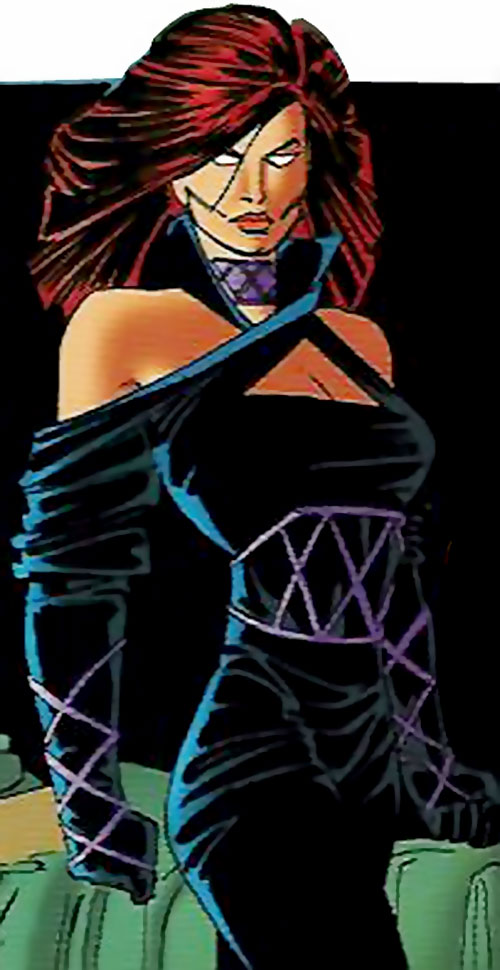