This profile is meant to be read after the Nocturnals base camp article.

Polychrome is a ghost, or more accurately a wraith. She seems markedly more powerful than most entities in these classes.

Poly has death-aspected powers. Such as a banshee’s wail or making people die of sheer terror. But she doesn’t want to use them anymore. She’s sworn to herself that she would never take a life again. 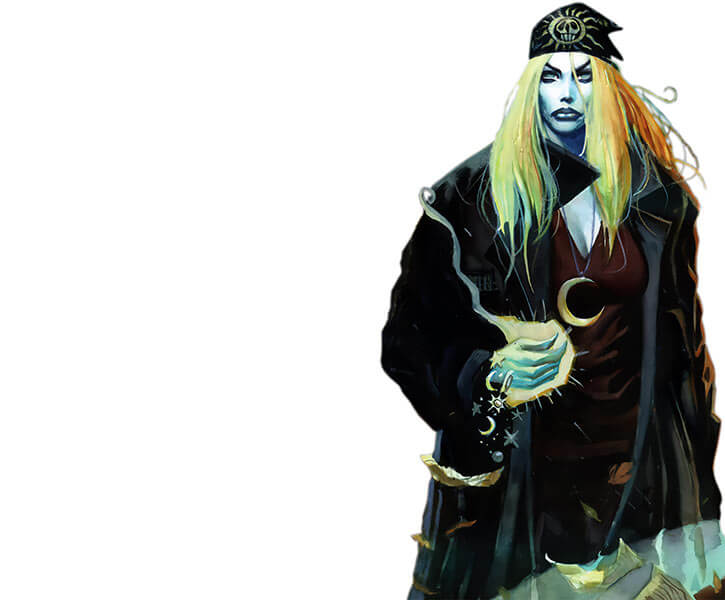 Her spectral spells include :

The Nocturnals TTRPG supplement notes that she also can possess machines, and see in the dark. The stats were presumably checked with Dan Brereton (who, like most genre writers, is familiar with pen-and-paper RPGs) so we’ll consider them reliable.

Polychrome explained that her level of control, and her magic, aren’t normal for a ghost. She also stated that she wasn’t supposed to belong to this reality, and that it was Doc Horror’s tech that allowed her to remain on Earth.

This implies that her current being is something normally found in the higher forms of afterlife. But this, in turn, conflicts with what is known of her life and early undeath.

Polychrome can’t permanently maintain a solid form. In practice, this limits her very little, and she just switches between spectral and material as needed.

The only time she mentions this limitation is when Eve wants her to read aloud at length. Which requires concentration to stay material and audible for long enough.

Poly cannot exist during the day. Daylight would force her to disperse, though she’d eventually reconstitute.

She also cannot enter areas with specific, advanced wards. The one example of such wards was apparently done by Crim aliens.

And she cannot cross large bodies of water.

Though ghosts are all made of roughly similar ectoplasm, they aren’t always able to understand or even see each other. Eve explained that ghosts usually ignored other ghosts. And that there aren’t that many of them around in the first place.

Though she’s not a standard ghost, Polychrome can still be affected by magic against spirits (necromancy).

The first Nocturnals volume is from the same year as Kristin Hersh’s “Your ghost”.

It’s a beautiful, evocative and minimalistic song. It’s fitting in many ways.

Pollyanna Shale was a small-time criminal and grifter in Nebula City, not far from Pacific City.

Her lies and beauty allowed her to simultaneously be in a relationship with a senior police detective and with one Rex, an important crime lord in the Pacific Northwest. She married the latter, and had a daughter.

She then cunningly leaked intel to manipulate both the police and the mobs. At the end of her intricate play, the conwoman was a major crime figure.

However, her reign was fairly short. Presumably, Rex and her lieutenants accidentally realised what she had been up to, and her house of cards fell apart.

As her husband and staff all turned against her, Ms. Shale was raped, tortured and murdered. Her short career apparently drew the attention of the press – perhaps like the 1947 “Black Dahlia” murder  or close equivalents.

(*When* that happened is unclear. Poly said it took place “decades ago”, which might correspond to a span where Don Lupo Zampa’s control of the mobs in the area wasn’t as strong. Based on Shale’s tastes in clothes, one guesses that her rise and fall occurred during the late 1960s).

(Polychrome mentioned that her birth name was Calliope. One gets the impression that she was running two separate identities for her cons, with Calliope living with the mobster and Pollyanna living with the detective. However, the police listed her first name as “Pollyanna” after her death.) 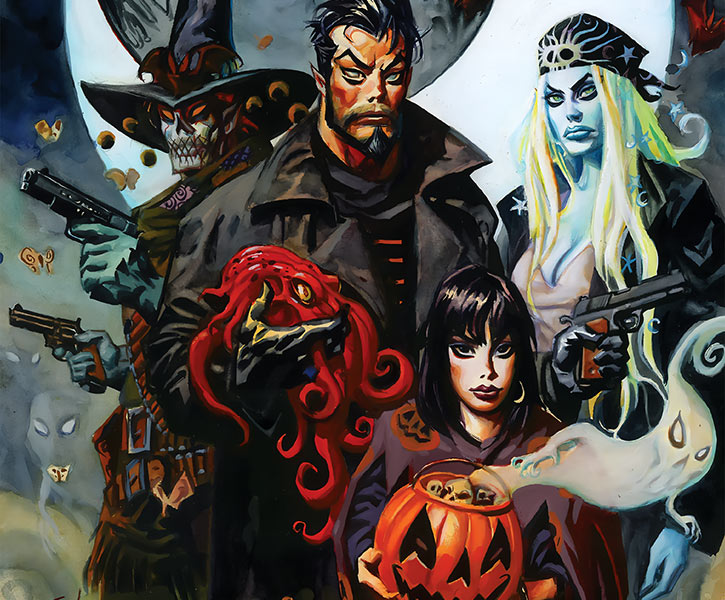 She went on a years-long murder spree, killing most everyone who had ties with her death. Her husband Rex narrowly survived, and fled to Europe.

For decades the late Ms. Shale brooded in the building where her bones still laid, stewing in monstrous rage.

(Firelion mentioned that the grisly murders of Pollyanna Shale’s killers were well-known among the police. It may also have received press coverage, further explaining her posthumousSomething that occurs after the death of the originator. fame. But since it was so long ago people recognise her name, not her face.)

It was presumably during the early 1990s that Doc Horror and his daughter Evening Horror came to investigate the famous Shale murder.

With her unique rapport with ghosts, Eve could easily see the dead woman. Though Shale lashed out, Eve calmed her down. She then helped the wraith regain her centre and her rationality.

Pollyanna reconnected with whom she had been before her death. She refused to pass on, and instead turned her life (well, undeath) around to become a healer and a protector.

Ms. Horror helped her with becoming a good person, and Ms. Shale became something of a surrogate mother to her.

It was Eve who nicknamed Pollyanna “Polychrome”, after the rainbow fairy  in her favourite books – The Wizard of Oz. And her dad used his weird science to make it possible for the wraith to continue existing even though her unholy rage was gone.

Rex, by then an aged man, did return to the US to visit his sick daughter. Polychrome came to face him while he was with their daughter and numerous grandchildren.

Though Rex felt she was there and talked to her, the wraith left. Her spectral presence and involuntary ghostly wail were terrifying the kids, and she didn’t want that.

And you come from above

From this time onward, Polychrome has been a core member of the Nocturnals.

She doesn’t routinely take part in field ops, especially the brawnier kinds. But her powerful magic has been a critical asset on several occasions. She can cloak the others when the goal is to be discreet, and she heals the wounded.

Polychrome prefers low key actions. But she once saved numerous souls stolen by Skerrl necromancers over centuries, so they could transmigrate normally.

Later on, she was instrumental in reuniting the witch children of the late Judge Hemlock. 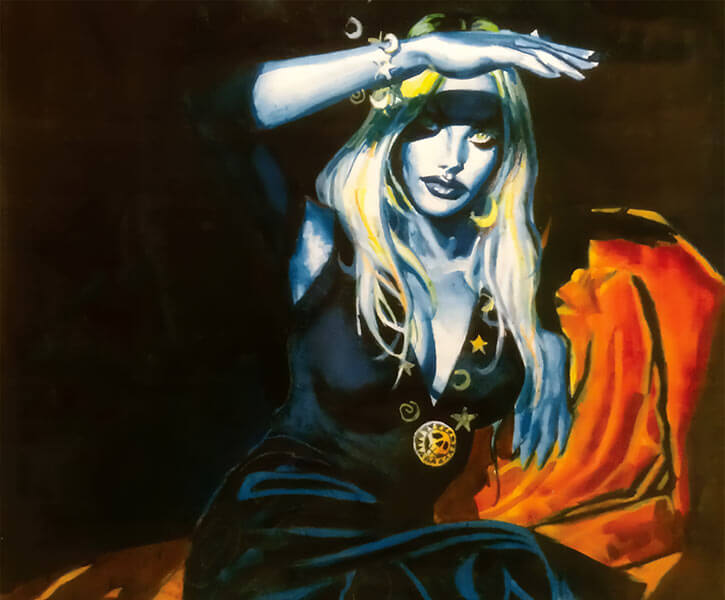 Polychrome usually appears as a woman in her early 30s made of solid, pale blue light. She prefers to float in the air, and it wouldn’t be amazing if somebody mistook her for an angel.

She can alter her appearance at will, but in practice she has a set form.

The only alteration she commonly does is to “dye” locks of her hair in pastel colours. Sometimes she adds tiny will-o-the-wisps in and around her hair, as ornaments. On occasions she made those small lights look like stylised stars, and moon crescents.

Her speech bubbles are lettered differently, so her voice likely has an eerie and shadowy sound. And unless Polychrome is making herself look material, an observant person can tell that she’s not really there.

Poly hinted that prior to meeting Eve she was a monstrous-looking spectre, made of hatred and rage.

The ghost with the cloth

Her appearance-modification magic is much more commonly used to create herself an unlimited wardrobe and jewellery. When she can’t be bothered she’ll usually just go for leggings, a cropped tank top and a bandanna.

The bandanna, and a motif with a stylized star with a skull face, are the most recurrent bits.

Even when she was alive, Polly was a gorgeous woman with more curves than any two XVIIIth century Alpine roads. And there is a deeply mysterious, darkly magical, cryptic mystical rule of undeath that usually forbids her from wearing a bra. Surely it’s some sort of geasA weird mystical prohibition in Ancient Celtic myths.. 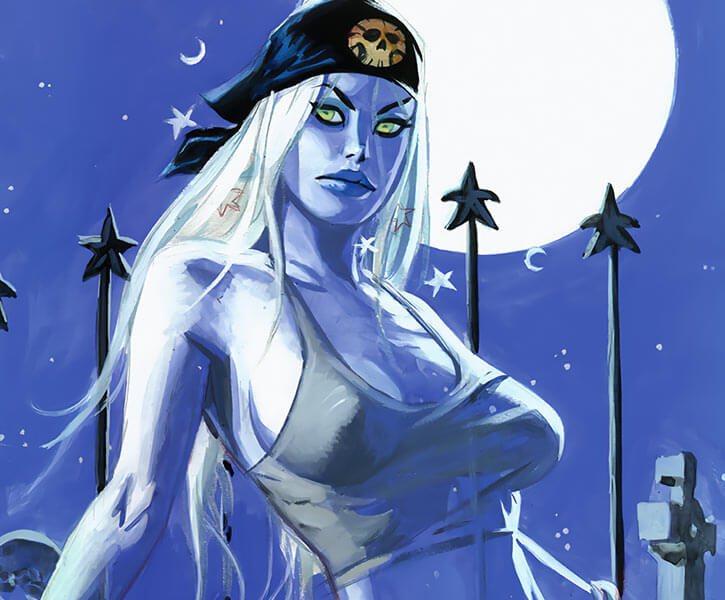 Perhaps ironically, Poly is the most sensible and responsible member of the Nocturnals. She’s a mother figure for Eve (mind, the alternative was Starfish) and often comes across as co-leading the team with Doc Horror.

Polychrome is fed up with violence, and will reliably argue for non-lethal strategies. She’ll drop the point when it’s obvious there’s no workable non-violent alternative, but with clear reluctance.

She doesn’t usually accompany other Nocturnals who are on a mission involving violence. She doesn’t disapprove of what they do, but would be too uncomfortable (or worse, too comfortable) fighting at their side.

She has her full range of emotions when near Eve, but these become muted otherwise. It doesn’t quite change her personality, but she’s noticeably colder and more aloof.

She occasionally watches over her grandchildren – who can also inspire some level of emotion, though it’s fainter.

Poly once said “odd’s bodkins”, which is antiquated even for somebody who was born during the 1940s. Perhaps she grew up in a devout, traditionalist family.

(Less diegetically  , my impression is that Mr. Brereton once envisioned Polychrome as being from a much earlier era than what was seemingly settled upon.)

Poly is the person the other Nocturnals feel the most comfortable talking to. Well, except for the Gunwitch.

Beyond caring for Eve, she also helps Starfish manage her depressive tendencies. 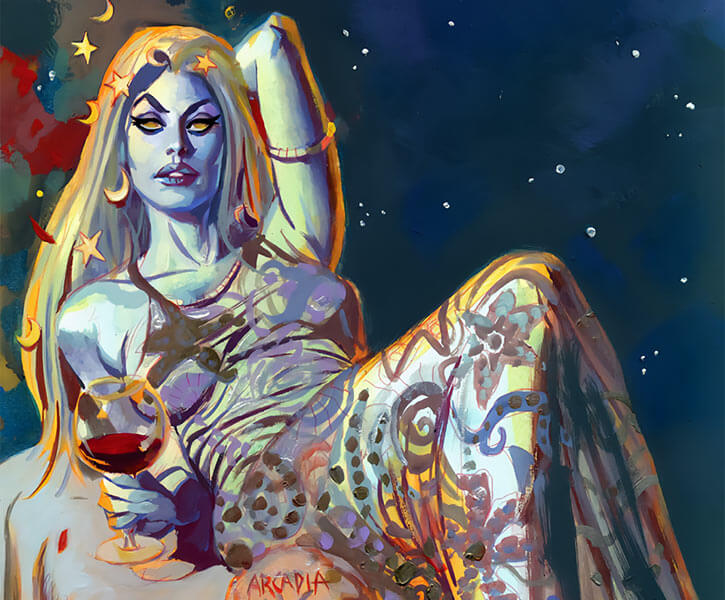 This specific painting of Polychrome is a reference to a theme of tableaux called vanitas  .

Ancient necromancer, trying to trap Polychrome’s essence: “Her light is strong !”
Polychrome, faintly smiling: “Child, my soul is spoken for.”

“One of the advantages of being what I am now, Phestus, is having lots of time to think about a great many things.”

Doc Horror: “Were you able to send [all the dead] to the other side, Poly ?”
Polychrome: “For the most part, yes.” (Faintly smiling) “There are always a few reluctant ghosts who can’t help but hang around, you know ?”

Occultist (Rituals) is limited to acting as a psychopompA guide of souls to the place of the dead., and preventing abuse of souls (including her own). She has a number of Rituals allowing other spirits to transmigrate correctly, though she won’t (or can’t) force them too, and to shield against specific Mystical attacks. These do not generally require material resources. 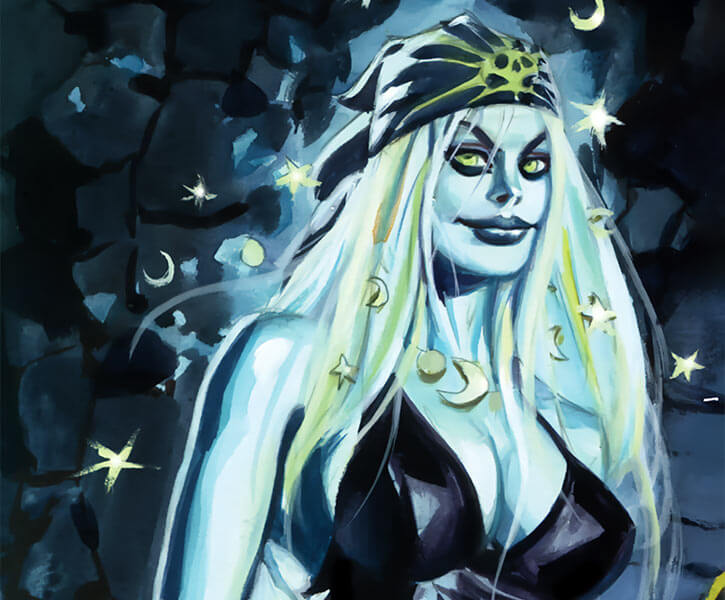 Poly lacks a number of Drawbacks she might have (Creepy Appearance, Mistrust…) given her powers and nature.

No criminal Skills. She wouldn’t use them, her knowledge is decades out of a date, and her career as something other than a swindler was brief. But back when she was alive, she was a good pickpocket.

Poly almost certainly can cast more spells. But she’s more about *not* using her powers. So I’ve used the Occultist approach to give her a “do anything” ability matching her most impressive feat, but along a strict theme.

It also explains why the Skerrl necros could take her down when she wasn’t expecting it, but couldn’t affect her once she was ready for them.

It is possible that she has a Minor Rage, as part of her violence avoidance thing. But it’s too speculative.