Ms. Jill Cabot and Constable Daniel Gulpilil appear in the fourth issue of Global Frequency, “Hundred”. This entry has S P O I L E R S about it.

Global Frequency (written by Warren Ellis) only ran 12 issues from 2002-2004. But it remains one of my favourites. Essentially, it’s X-Files done as short, high-tempo action thrillers depicting last-resort, high-competence efforts to deal with strange threats. Ellis’ later Injection draws from the same well.

The core of “Hundred” is a two-heroes-vs-an-army-of-mooks extended gunfight scene. This seems based on late 1990s “gun opera” Hong Kong movies.

Constable Gulpilil is a young patrol officer. However, he indicated that his combat experience preceded joining the fuzz. Furthermore, he fought with paired semi-automatics (my guess would be two Browning High-Power). This isn’t a police approach, especially since officers in Victoria still carried a Smith & Wesson Model 10 revolver back then.

All in all, his tactical performance was closer to that of a Chow Yun Fat character, further hinting that his experience before putting on his blues must have been interesting.

Ms. Cabot fought with paired Micro-Uzi machine pistols, and carried extra clips. She had an even stronger killer instinct than Gulpilil, and similarly sharp reflexes.

Though Danny called her a spy to make fun of her, Jill’s weapons and tactical behaviour were more reminiscent of a cinematic  hitwoman. She was going for a large volume of rapid, indiscriminate fire at close quarters. Our game stats assume that she’s some sort of underworld enforcer.

Cabot *presumably* had EOD  skills, since otherwise Aleph’s approach to the situation would be odd.

Both Jill and Danny could transport their weapons in their Global Frequency attache case. One gets the impression that these are treated like diplomatic luggage at airports.

I *assume* that they were both wearing concealed soft vests, also drawn from their GF case.

“Lightning” and “Pommie Girl” worked exceptionally well together, instinctively coordinating and covering each other.

During the early 2000s, an Internet consultancy firm in Melbourne degenerated into a cult.

Their strange religious fervour seemed deliberately patterned after the Heaven’s Gate cult  by their leader, the First Among Equal. But if so, he drank his own Kool-Aid. 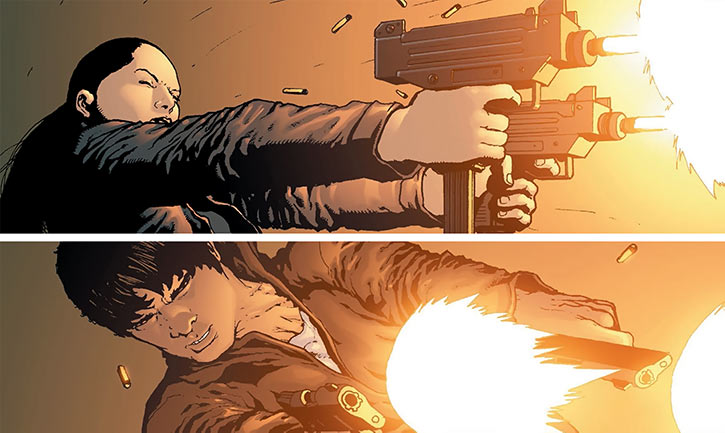 In 2002, their fervour was such that they launched into a demented mass suicide plot. Nearly a hundred employees took a lethal dose of slow-acting poison. The also set up a huge bomb. It would go off in their Central Melbourne office building once the poison had killed them.

They issued a demented list of demands on their company’s website. They further took hostages – apparently a mix of newer employees at the firm, and most of the female employees.

However, this was detected by the Global Frequency before any significant number of people could read that web page. Aleph launched a DDOS  to make the site inaccessible. She also made sure that the ultimatums about transitioning human existence toward the multisexual gods from beyond the pillars of creation hadn’t been indexed by search engines.

With the demands silenced, Aleph activated two agents in Melbourne.

One, Constable Gulpilil, was the GF contact there. He was a rank-and-file cop with an interesting past.

The other, Ms. Cabot, was a GF agent who just happened to be vacationing in Oz.

Since the cult members were already fatally poisoned, the Frequency agents’ orders were to make full kinetic entry, eliminate all opposition and reach the bomb.

Meanwhile, Aleph called the First Among Equals (FaE) and distracted him. With the Global Frequency’s technical expertise, she could explain exactly how she had arranged for his demands to go unread, demoralising the FaE.

Though the cultists/web designers were all armed, almost none of them had tactical experience or training. Nor had the First Among Equals any sense of how to handle the situation. While they were close calls and they were badly outnumbered, Gulpilil and Cabot rapidly cut through the opposition.

They reached the FaE at the last second. Aleph’s bluff about having jammed the bomb’s remote control had narrowly failed.

However, whilst calling Aleph’s bluff, the FaE stated that the remote was a simple button. The dead man’s switch mentioned in their demands had been made up. The Global Frequency operators thus shredded his arm with gunfire, forcing him to drop the remote and leave the bomb undetonated.

Global Frequency then placed the usual phone calls, and the police let the two operatives leave without fuss. All hostages were safely evacuated, and it may have been possible to save some cultists.

Danny is an Aboriginal bloke in his late 20s, with wavy black hair. My bet would be a 2B texture , but honestly I’d rather leave hairdressing to professionals, or at least people who have hair. He’s athletic and roguishly handsome.

Jill is a pale-skinned English brunette, with her hair drawn back in a long queue and a slim build. She’s also attractive, in a haughty ice queen fashion plate way.

Constable Gulpilil is a focused, reasonable, polite bloke. He seems to want to be good, professional police. He didn’t want to kill people unless he had no choice, and there was a sense he wanted this in part to distance himself from a difficult past.

Ms. Cabot is a snippy snob with an obvious English accent and diction. She doesn’t want to say anything about her job, but she’s obviously a ruthless killer with an aggressive personality. Unlike Danny, she welcomed the rush from combat and murder.

When they met, Danny and Jill were both hostile. They were unexpectedly going into a gunfight with daunting odds at the site of a complete stranger. Furthermore, Jill was furious that her vacation had been interrupted (presumably, it was her first one in years). And Danny just had a run-in with his remarkably racist Sergeant.

They started by trading insulting nicknames and remarks. Howbeit, it became obvious within minutes that they were attracted toward each other – especially with the pre-tactical tension. Though they kept the derogatory nicknames, they were clearly flirting.

Once the op was over, Danny immediately proposed a drink, but Jill said she rather go straight to the shagging, while they were still riding on adrenaline.

Curiously, this on-sight sexual attraction resulted in exceptional coordination as a fighting duo. They were reflexively protecting and trusting each other in the gunfight, without any prior shared training.

I guess it’s the heterosexual, small-scale equivalent of the Sacred Band of Thebes .

Drawbacks:
Misc.: Constable Gulpilil runs into racism issues. He may also have a Dark Secret.

When Ms. Cabot and Mr. Gulpilil fight as a duo, they acquire :

The Dream Team’s Rupture Condition is no longer being lovers. If that occurs, *all* the additional edges above also go. Ah, romance. 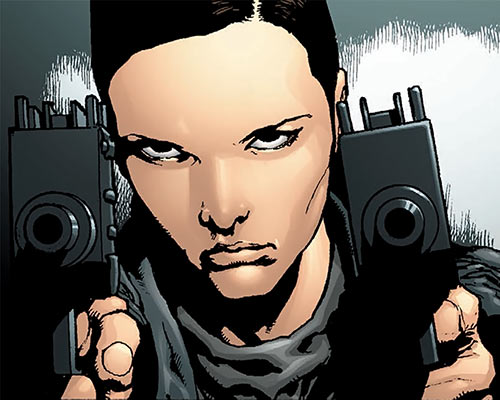 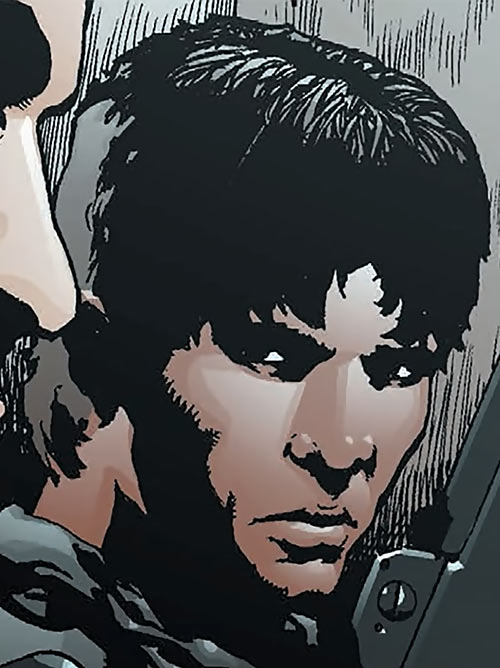