The Poodle Lady is never seen without her trained, if ratty, poodle. It can perform tricks for entertainment, as part of a circus act.

The dog seems exceptionally bright and well-trained. It could do things such as grabbing a hand grenade in its mouth, trot into a restaurant, drop the grenade there, activate a mechanism to remove the pin, and trot out clear of the blast.

Memorably, the poodle was also able to jump and snatch an advanced batarang out of the air before it could hit its mistress. It then faithfully brought the projectile to the Poodle Lady. This captured batarang was later used by the Penguin to frame Batman.

We’ll assume here that the Poodle Lady is the one who trained the other animals of the Red Triangle gang. Such as the spider monkey in the circus costume, and the various penguins. Someone had to, and since she’s a known animal trainer…

The Poodle Lady excels at remaining haughtily, silently, ominously unflappable even in violent and stressful circumstances. Good, bad… she’s the one with the poodle.

She seemed to be one of the two field leaders of the Gang, along with Organ Grinder.

It is *possible* that she had technical skills. Several Red Triangle members knew at least basic electronics. When they sabotaged the Batmobile, the Poodle Lady seemed to be one of the gang members coordinating the operations. Possibly.

She was also the one operating the sensors and launch systems of the penguin rocketeers.

This gang was colourful, cool, competent and well-run – by *realistic* standards. They seemed a match for the police, and were almost able to threaten Batman.

All these guys have “Professional Henchman” stats from our Thugs & Criminals article, often with one additional Skill, Skilled Power or such in the 3-to-4 APs range.

When seen they were mostly about chaos and fear, rather than body count. They scared and wounded people, but they were also mostly shooting in the air. Howbeit, they likely wouldn’t bat an eye if ordered to leave many hats on the ground rather than just act loud and cruel. 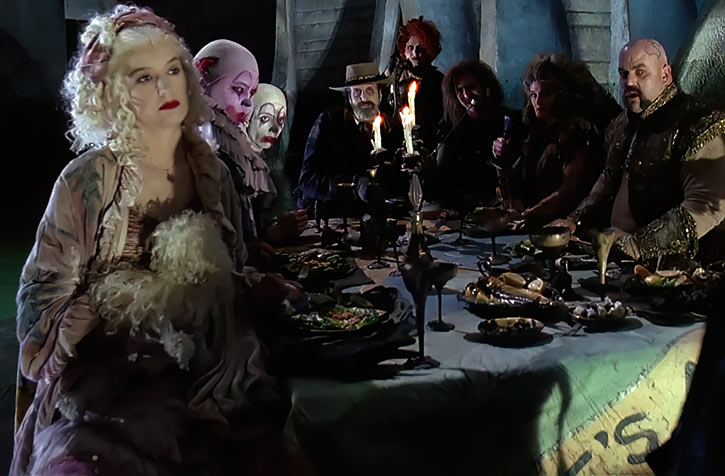 The Red Triangle troupe was once a well-established circus, which frequently stopped in Gotham. About 15 years before the movie, it briefly went on hiatus. When it returned, it had new performers including the Poodle Lady, the Aquatic Bird Boy (presumably the Penguin (Oswald Cobblepot)) and “the world’s fattest man” (possibly the fat clown with a stun gun).

The new formula circus was up to something sinister, with numerous kids disappearing. One assumes that the young Penguin, perhaps with the Poodle Lady and the Fat Man as his lieutenants, took over and turned the Red Triangle Circus into a mob.

But the disappearances led to the police arresting many of the performers. At least one (implicitly the Penguin) managed to flee from the cops.

By 1992, the Red Triangle (including the Poodle Lady) was a sinisterly baroque, still circus-themed-by-way-of-the-Addams-Family, gang led by the Penguin. They were headquartered underneath the Old Zoo of Gotham City, which had been closed for years.

Using their technical talents they repurposed what had been left behind as a base, weapons, vehicles, etc.. One also gets the impression that they bred penguins which had been abandoned there when the zoo closed.

The Red Triangle gang were the footsoldiers of the Penguin’s plot against Gotham City in 1992. Initially, they pretended to work against him, in a successful ploy to make the Penguin look like a hero. Once the Penguin became a Mayoral candidate, they occasionally and semi-discreetly were his entourage.

The plan eventually crashed against the Batman. The masked hero could take on the Red Triangle gang without major difficulty. Howbeit, he was unable to capture the Poodle Lady. Because of the poodle. 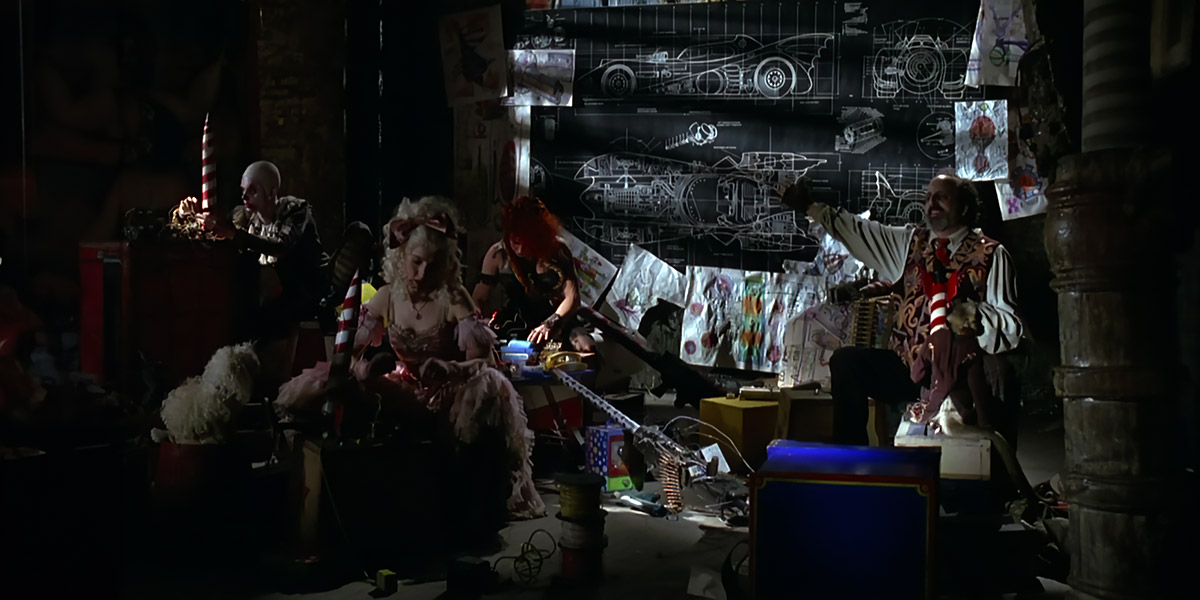 After Batman foiled the Penguin’s main plans, Cobblepot launched a revenge plot – essentially, blow up downtown Gotham. When that failed and the Red Triangle realised that the Batman was coming for them, they slinked (slunk ?) away and left the Penguin to his fate.

The Poodle Lady was the last to leave. Ominously, of course.

The Red Triangle gang was a cool example of director Tim Burton’s “dark carnival” aesthetics. They had a decadent, down-on-their-luck, sinister, has-been-yet-dangerous vibe.

The Poodle Lady was clad in a performance costume evoking Ancien Régime aristocracy by way of cabaret shows – with a dress, a vest, lacy fingerless gloves and lil’ booties. Everything was in shades of pink, but these were faded from age.

She has curly platinum blonde hair to the shoulders, with pink ornaments. It could be a wig meant to project an aristocratic impression, though. Her skin is pale, but then she’s only ever seen underground or at night.

She doesn’t say a word during most of the movie, remaining impassible and expressionless. When she does speak in the last few scenes, it is an eerily detached, near-robotic monotone.

The “poodle” is actually a female bichon frisé (pronounced bee-chow free-zay). But she is projecting the impression that she is a poodle through method acting.

She has dirty-ish fur from living in unkempt surroundings (curly bichons are a right pain in the keister to keep clean). The hair on her head is done to echo her mistress’, and she also sports little pink bows.

Since bichons have tiny legs, the Lady will usually carry her pet in her arms.

While bichons are known for their yapping, this specimen is as eerily silent as its mistress. Although it once growls like a much larger dog would.

(This dog, named Darla, appeared in several early 1990s film. Her most memorable role was in Silence of the Lambs .)

(Bichons frisés were traditionally associated with aristocrats (especially in Spain and France) and, later on, with street performers such as early XXth century organ grinders. The breed nearly went extinct during World War One due to the devastation in Belgium and France.)

Efficient, collected, silent, aloof. She seemed protective of her pet, yet was confident in its acumen.

The Poodle Lady didn’t seem to mind any of the Penguin’s plans, such as kidnapping babies, murdering Red Triangle members if they didn’t obey, or killing tens of thousands out of spite.

The Tim Burton version of Batman is markedly less powerful than most comic book versions. And though the visual gag of the poodle snatching Batman’s advanced projectile right from the air worked fine in a two-hour movie, she’d need more tricks and backstory to be a recurrent character.

One amusing possibility would be that both she and her pet are Manhunter robotic agents who did not self-destruct after the Millennium event, and went rogue as partners in crime.

She *might* have Gadgetry: 03 or 04 (with realistic rules as to projects length, costs, etc.) but this is too tentative for inclusion in her stats block. 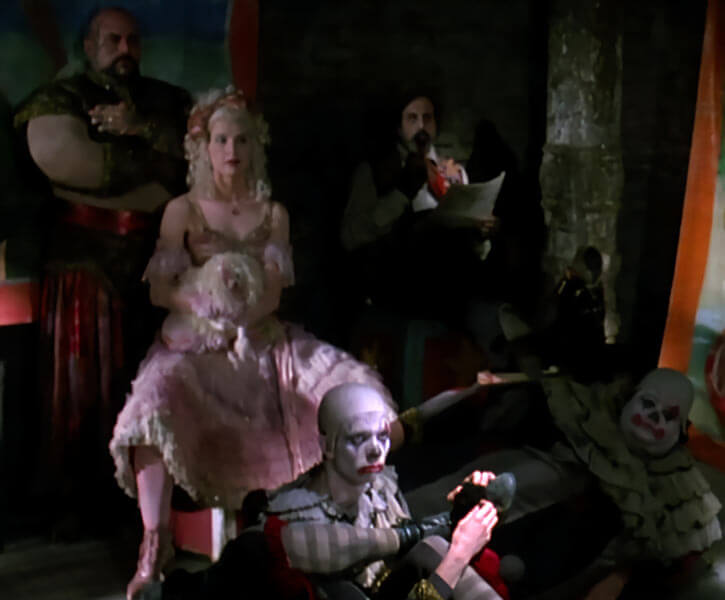 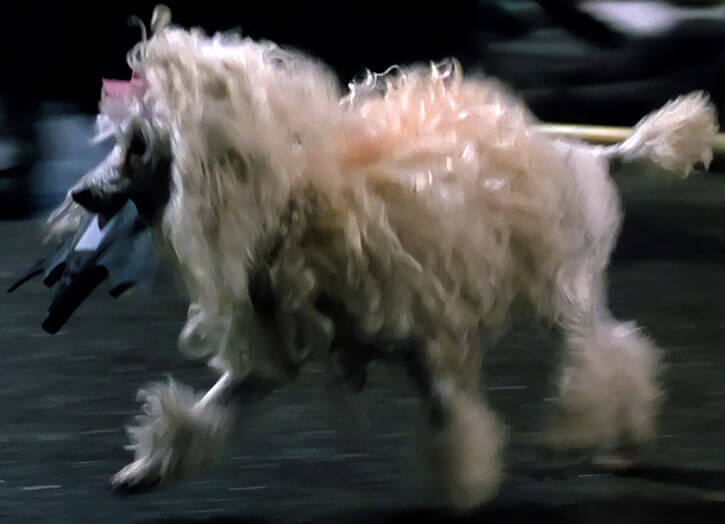