Alex Gentry was a competent weapons designer, who came up with a simple but surprisingly effective design with the first Porcupine suit. He’s been described as an inventive genius, and could actually be pretty smart (if a bit oddball) in his plans and strategies. He was also able to think on his feet.

The Porcupine Mark One suit is a bulky protective suit. It is fully enclosed and includes a gas mask protecting the wearer from the fumes emitted by some of the weapon systems.

The outer armour is actually made up of hundreds of robust tubes (“quills”). Using controls built into the belt, those tubes can rise into firing position and discharge their payload, before settling back. This allows the suit to carry a large number of different payloads to engage unconventional foes and situations.

Furthermore, there is a very efficient dorsal jetpack. Or rather, clusters of specialised “quills” emitting jet exhaust.

The suit looks like it can only be worn by a large person such as Gentry (though nowadays 6’1” is less impressive than it used to be). It isn’t initially powered, but an hydraulic exoskeleton  appeared in later evolutions.

The jetpack can only be used in vigorous bursts, not as a continuous stream. In DC Heroes RPG terms this is Jumping, not Flight.

Manoeuvring is done through body English. To stop, Gentry shoots a suction cup quill at some nearby structure. The suction cup trails a steel cable, which Gentry swings on to slow down and stop, like a swingline. He’s surprisingly adept at this, and does not normally need to make a roll to perform this manoeuvre.

Whilst wearing the Mk1 suit, gas was by far Gentry’s preferred weapon. In a typical encounter the Porcupine would have time to use gas once or twice, and one or two other attacks before being defeated.

Alex Gentry was originally a weapons designer working for the US military during the Cold War. During the early 1960s, inspired by the porcupine, he designed and built a special protective suit. This bulky body armour could use its “quills” as highly versatile projectile weapons, combining offence and defence.

Though he was very proud of his special suit and of the power it gave its wearer, Gentry was embittered by his mediocre pay and status. He thought that his achievements, and in particular the porcupine-like body armour, deserved a much better reward than the paltry raise he might realistically get.

Ruminating over this, he decided he should become a super-villain instead – and forge his own lucrative destiny.

Gentry debuted by attacking a new, supposedly robber-proof bank in broad daylight during the opening ceremony. Henry Pym, the designer of some of the security, couldn’t stop him, but he tracked the Porcupine down and confronted him at the Army ordnance centre where Gentry had made his base.

The Porcupine, using special anti-Ant-Man payloads, easily defeated the diminutive hero. He then threw him into a water-filled tub to die from exhaustion and suffocation.

Thankfully, Pym was rescued by the Wasp. The pair then ambushed the villain and clogged up most of his tubes using bags of cement. The Porcupine nevertheless escaped, using unclogged jet tubes to jump out of the building and more or less glide away.

Being the vengeful type, the Porcupine immediately started to work on getting back at Pym. During an acrobatics exhibition of Giant-Man and the Wasp, he shot Pym to make him fall from a building, but somehow Pym survived with just a broken ankle.

Undaunted, Gentry joined a club of young Giant-Man fans – basically 1960s nerdy Marvel cosplayers. He pretended to just happen to have a perfect Porcupine costume. Thus undercover, he ambushed the Wasp and Giant-Man, and captured the Wasp in a specially booby-trapped car.

Gentry then drove away, with the car giving off DDT fumes to prevent Pym’s ants from tracking him. Back to his base, he locked the Wasp up, telling her she’d be freed when she would tell him Giant-Man’s secret identity.

It was a ruse – Gentry let the Wasp escape then tracked her down, via a drone quill, to Giant-Man’s secret lab. Gentry followed her there and performed fairly well against the heroic duo.

Giant-Man eventually seized him, but the Porcupine unexpectedly swallowed several pills that he grabbed from Giant-Man’s belt. Gentry assumed that he would soon grow even larger than Pym.

As it turned out, Gentry actually swallowed a handful of shrinking capsules, and shrank out of sight. How the Porcupine escaped this misadventure is unrevealed, but from then on he would seek safety in numbers and operate along with teams.

From Nefaria to Egghead

The Porcupine was next seen as an agent of Count Nefaria. The ambitious mobster famously captured the whole of Washington, D.C. and tried to have the X-Men bear the brunt of the blame. Gentry helped by capturing the Beast.

However one of the henchmen, the Unicorn, convinced the rest to betray their employer and escape with the ransom. Though they lost the loot, the Porcupine and his colleagues escaped from the military.

When he appeared anew, the Porcupine was again part of a band of super-villains working as henchmen for a mastermind with a major plan. Egghead built a nuclear ballistic missile, and he and his mercenaries blackmailed the US from somewhere in the Canadian countryside, threatening to nuke New York City.

Egghead had chosen Canada for its absence of super-heroes. But a fledgling super-team, the Flight, responded. Though this very early version of Canada’s super-team shouldn’t have been in the field, they prevented a nuclear detonation thanks to the sacrifice of Flight member Saint Elmo.

Porcupine was defeated when Wolverine slashed the front of his costume open.

In 1970, Porcupine next joined one of the early iterations of Batroc’s Brigade, along with the Whirlwind. The two Americans and the Frenchman leapt into action too soon, and against no less than Captain America. Having never trained together, the three villains kept getting in each other’s way and were defeated.

Cap failed to capture them, but they gave up working together.

In 1973, the Cowled Commander hired the same crew as Nefaria did a few years before – minus the Unicorn, of course. The Porcupine, the Plantman, the Scarecrow and the Eel (Leopold Stryke), joined by the Viper (Jordan Dixon), were to launch a major crime wave in New York City. They were stopped by Captain America and the Falcon, and arrested.

With his two colleagues Plantman and the Eel, Gentry became a member of the Celestial Mind Control movement, a weird cult organised by the alien Nebulon.

They went through a number of “self-confidence development” sessions, which included gunning down their “bozo selves”. These were automatons wearing replicas of their costumes and symbolising their failures and inadequacies.

More or less brainwashed and full of new-found confidence, the Eel and the Porcupine were sent to take down the Defenders. The Porcupine gassed the heroes by surprise, and stood triumphant. However, despite all their talk about self-confidence and leaving their bozo selves behind, the two villains were then defeated by Nighthawk.

By 1977, the Porcupine had returned to planning and leading his own operations. He thus hired a crew to rob a swank New York City hotel. The operation went well until they robbed one of the ballrooms, where a high-end fashion show was taking place.

Unfortunately for Gentry and his men, the show was the debut of Janet van Dyne as a fashion designer. In short order, the criminals were defeated by the Wasp, Yellowjacket and Nighthawk.

Along with an embarrassingly large number of heroes and villains, Gentry was later involved in the “Defender for a Day” fiasco. The less said, the better.

At some unrevealed point of the 1970s, Porcupine had come to work for Justin Hammer. This association with Hammer may be how an exoskeleton became a part of the Porcupine suit. Gentry was occasionally part of the security detail guarding Hammer’s famous floating villa.

Porcupine was present during the 1979 battle royale between Iron Man and an army of Hammer lackeys. Hammer’s mercenaries were defeated, with Iron Man destroying the Porcupine’ suit during the fight.

Could this be… the end of the Porcupine ?

It never played much of a role.

The Porcupine used to be an ambitious, prideful, fairly smart super-villain who gradually downgraded his ambitions. Over the years he simply became a generic mercenary criminal, albeit one with a good technical education.

“All my life I’ve been just another unknown, unsung scientist ! But I’m too brilliant to remain that way ! By sundown the name of the Porcupine will be known throughout the world !”

“But of course I, the Porcupine, belong here ! Where else does a bank robber belong but in a bank ?” (knocks out guards)

“Did you hear of my deadly little quills ? If not — here’s a special demonstration !” (TIKATIKKATIK !)

Advantages:
Expertise (Weapon systems design). Will usually have some sort of Headquarters with a Lab.

The listed HPs are for Porcupine’s earliest career as a solo Giant-Man opponent. After that, he started operating as a part of groups that did not perform very well, and only had 15 HPs. When he started wearing the second Porcupine armour he was flush with confidence in his design, and had a respectable 40 HPs – but only during his first outing.

In 1973, the Porcupine demonstrated an unprecedented ability. His suit now included an exo (or an “hydraulic skeleton”, in his words).

The apparent effects of this generation of exo were /STR/ 07 and a MPR (the land speed of the wearer is diminished by one AP when running). 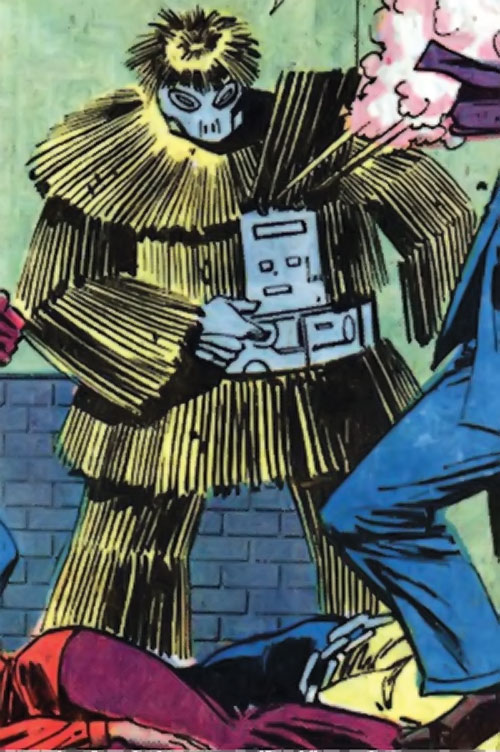 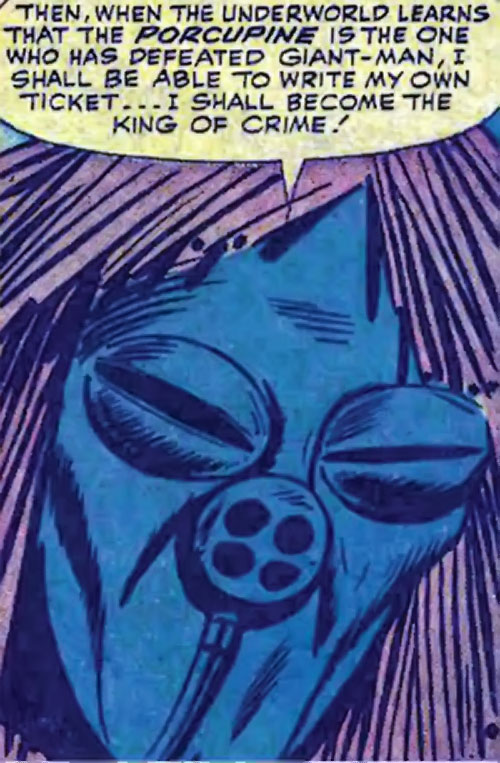 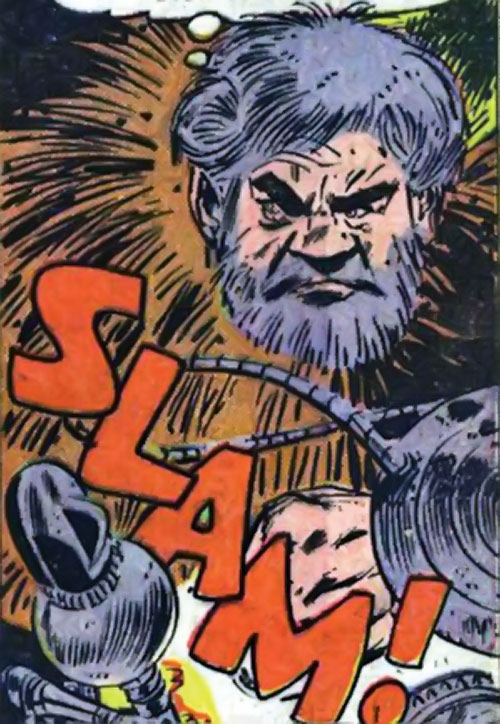 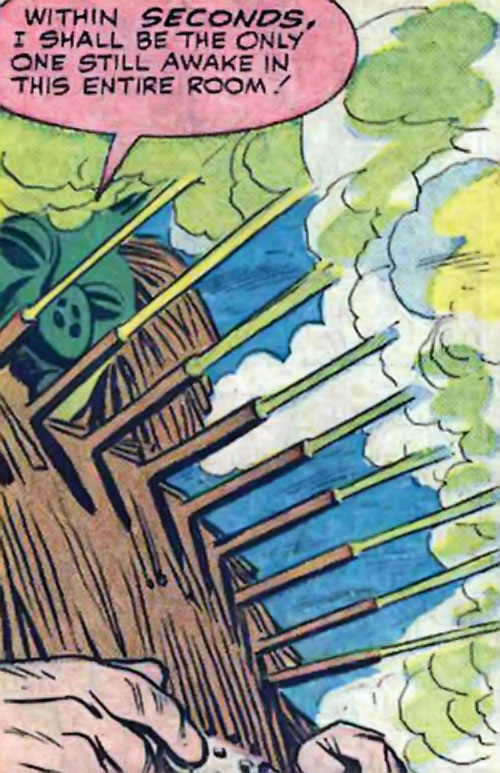 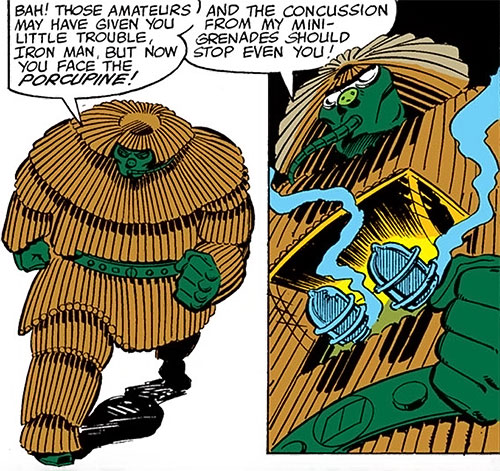 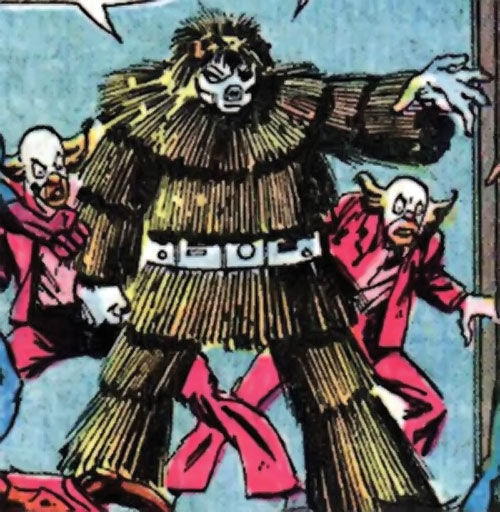 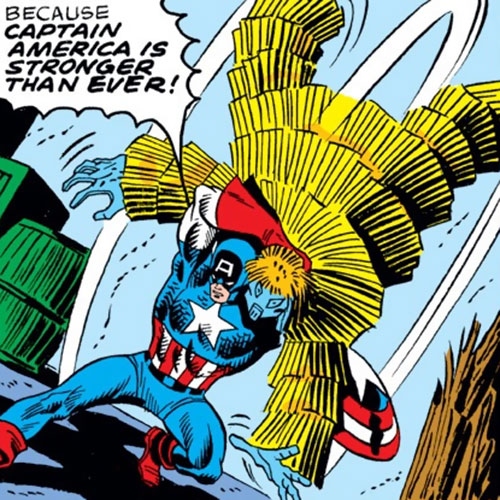 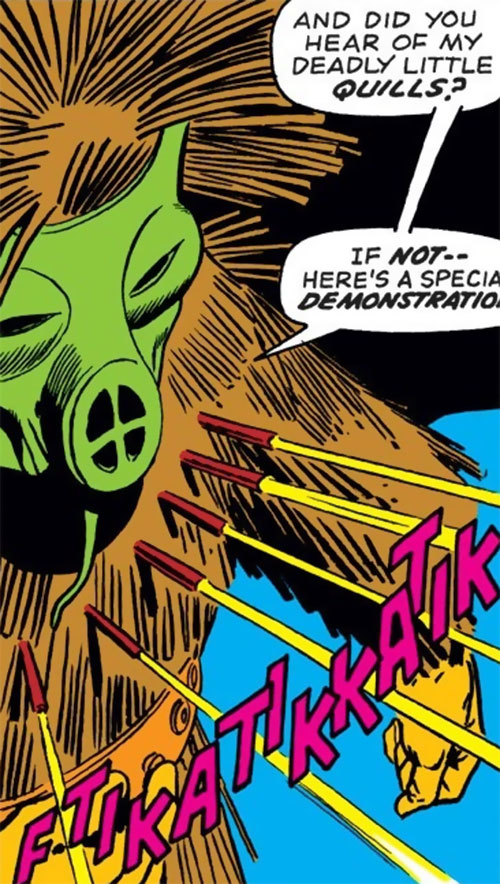 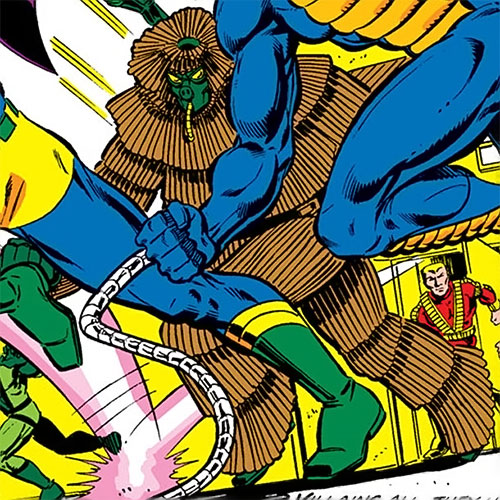 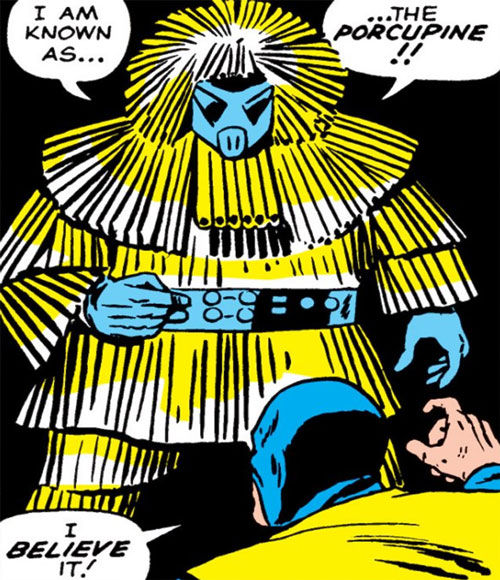 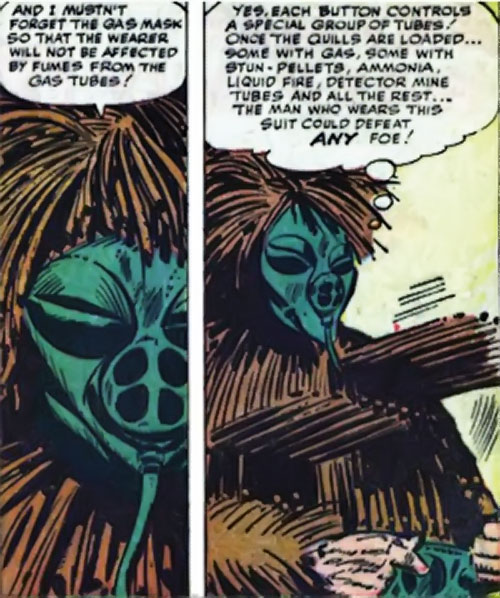 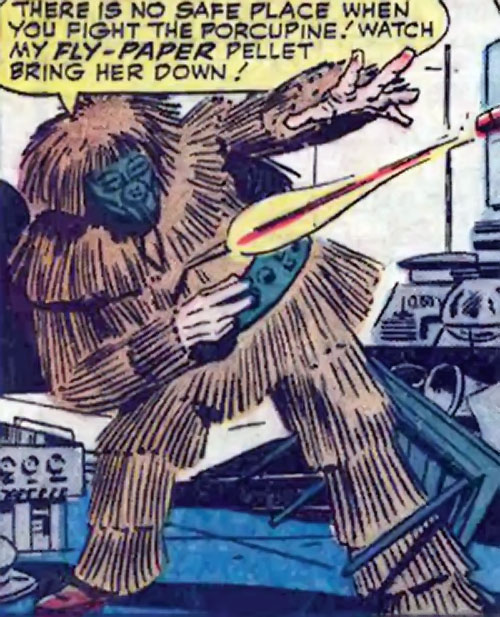