Poundcakes is a minor Marvel Comics character, first seen in 1979.

Poundcakes is the largest and brawniest of the Grapplers. She has a naturally thick physique (“big-boned”, as they say), and an exceptional muscle mass.

But there’s a loose sense that she never was as technically proficient as, say, Letha or Titania.

Among the Grapplers, she’s the most likely to seek to close in and grapple. Still, most of the time, she’s a striker.

As one-half of the Skrull Kill Krew (no relation) wrestling tag team, her signature move was the “skrull-kracker”. It seems to be a “torture rack” backbreaker move, maybe akin to the one Lex Luger used as a finisher back in the days.

She knows how to operate powerboats. 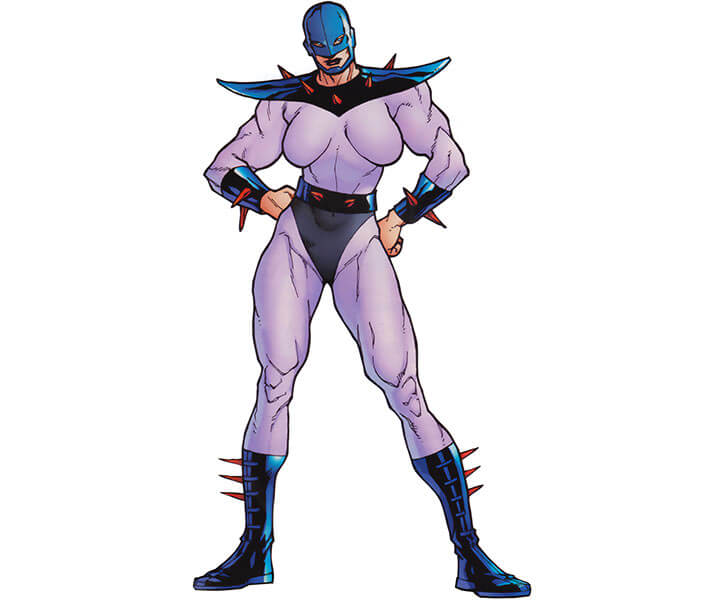 After being cybernetically enhanced, Poundcakes was seen lifting a few hundred kilos of machinery, and using it as a ram.

She seemed stronger than the others, but not as fast or as acrobatic. Still, her strength finally gave her an edge compensating for her okay-but-not-great ring skills.

The seismic boots can also give off a shockwave underwater. But it doesn’t seem as powerful as when stomping onto a solid surface. 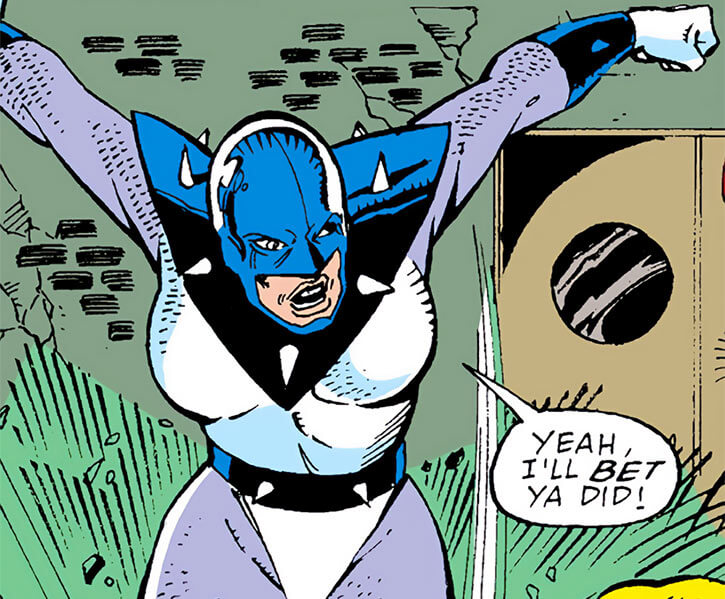 The Power Broker treatment seems to have been much more successful with Poundcakes than it was with Letha and Titania – never mind Screaming Mimi.

Secondary sources  list her at “Class 25” – up to ten times more than her friends.

So, No-Prize HypothesisA made-up explanation to plug a plot hole time. It was the same treatment as the others, but it technically failed. That is, it both enhanced her strength and deformed her body.

However, said “deformations” just amounted to a larger frame and bigger muscles, decuplingMultiplying by ten her final strength level.

By 2017, Poundcakes’ Power Broker super-strength seemed to have faded away. But she was still a powerful, beefy fighter. She could outmuscle large, male pro wrestlers.

Her old Roxxon cybernetic enhancements likely play a role in this brawn. 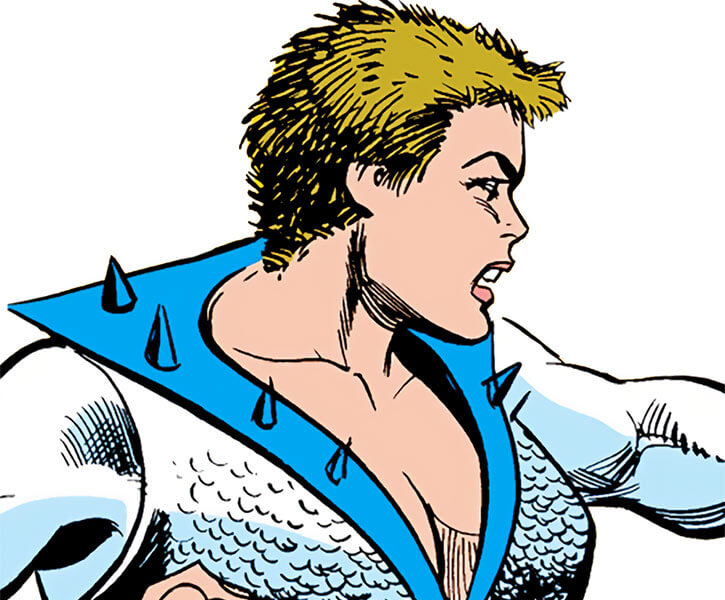 Poundcakes was the Grappler who had the longest UCWF career. She didn’t leave after Letha did. And she was strong enough to keep competing as Power Broker-derived strength levels crept upward.

She was present when the Thing (Benjamin Grimm) and Ms. Marvel (Sharon Ventura) exposed the Power Broker scandal.

Poundcakes and other Grapplers were among those enhanced wrestlers who formed a brute squad. They sought to defend the Broker, and avoid going through withdrawal and strength loss.

A two-person wrestling move by Poundcakes and Mangler (Lucius O’Neil) took down a weakened, sick Thing.

The exact events following the Power Broker exposure at the UCWF are unrevealed, as the The Thing series stopped there. But the Federation endured. 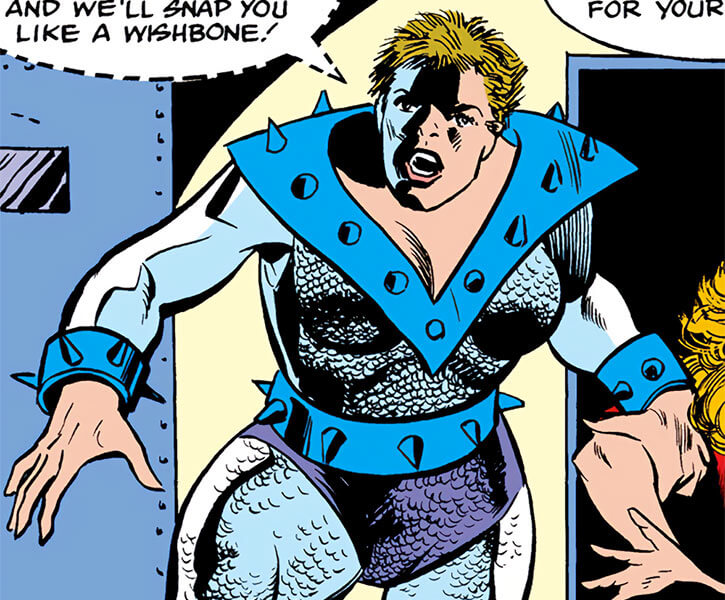 However, Ms. Pouncy felt that the industry was moving away from tough shoot wrestlers like herself. And more toward pretty actresses in bikinis.

One suspects that wrestling women as strong or stronger as she was also meant that Pouncy’s decent-but-not-great wrestling skills were becoming more evident.

She gradually exited the UCWF during the early 1990s. One imagines that disagreements with the management pushed her toward the bottom of the cards.

In 1990, Poundcakes was drinking in a shady Lower East Side bar when she was accosted by Jackhammer. The presumably terrible pick-up attempt led to a brawl outside.

However, they were bushwhacked by Anaconda (“Blondie” Sitznski) and Asp (“Cleo Nefertiti”), so their friend Diamondback (Rachel Leighton) could date in peace.

In 1991, Ms. Pouncy was among the guests of Superia, who pitched her “Femizons” concept. She helped defeat Captain America (Steve Rogers) and Paladin. But these and Serpent Society friends ultimately derailed Superia’s project.

In 1993, she attended a big A.I.M. weapons expo, as did throngs of costumed villains and mercenaries.

In 2001, Poundcakes escaped from prison.

She soon found a job — ferrying contraband weapons to rogue Atlantean soldiers, based off the Maine coast. But the delivery was raided by the Superhuman Tactical Activities Response Squad, sent in by Dr. Valerie Cooper.

However, Poundcakes narrowly managed to escape, as STARS agents Kali Vries and U.S.Agent (John Walker) were overconfident. And she did keep her payment – a chest full of booty, likely recovered by Atlanteans from a sunken galleon of old.

However, she was reportedly arrested by the Avengers later on. 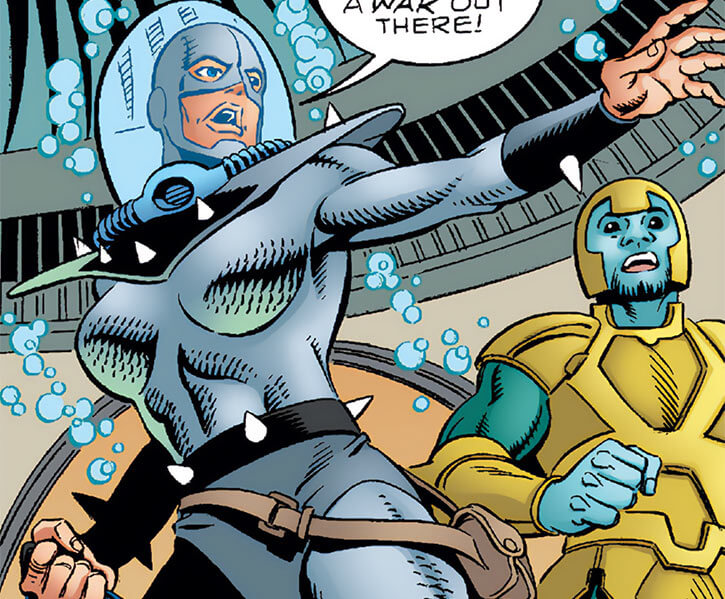 In 2003, Poundcakes was part of the army conjured by Krona to fight the heroes of both the Marvel and the DC Universes. She engaged Big Sir (Dufus Ratchet).

In 2008 Poundcakes was hanging out at a Bar With No Name in New York City. She seems to do that a lot to find jobs. A brawl briefly broke out with Spider-Man (Peter Parker).

But the super-villains there ended up helping Spider-Man locate the Bookie (John Ladue). Ladue had swindled them out of their betting money — $1,500, in Pouncy’s case.

In 2009, Ms. Pouncy was involved in a brawl at the exact same bar, against Daredevil (Matt Murdock) and Spider-Man (Peter Parker).

In 2010, Pouncy rejoined the resurrected DeVito and Feliciano. This *might* mean that she acquired connections with the Hood (Parker Robbins)’s gang.

In 2011, she was an inmate at the Raft island prison. She no longer wanted to be called Poundcakes, and her morale didn’t seem great.

The prison was badly damaged during the Fear Itself  events. Marian was among the prisoners who worked to get out of the women’s quarters before they’d drown or suffocate.

Early on she sided with dominant prisoner Indali, helping her subdue Moonstone (Karla Sofen) of the Thunderbolts.

However, Pouncy grew irritated at Indali. While fighting off attacking male prisoners, she turned against her and punched her out. Ms. Pouncy then had the prisoners follow Moonstone instead, as it was a safer bet to make it out alive (if still imprisoned).

In 2013 Pouncy was free, in costume, with better morale, and back to using the Poundcakes name.

She and Letha ended up having drinks with Wonder Man (Simon Williams) and the Beast (Hank McCoy).

For spit and giggles, she did heavy-handed passes at the Beast. Though she scared him away with a saucy anecdote about how she had earned her “poundcakes” nickname.

In 2017, Pouncy and Feliciano were working as racketeers for Mr. Negative. After a brutal fight with the Wasp (Nadia van Dyne), they took a position as security guards. From there, they also could relaunch their wrestling career as the Skrull Kill Krew tag team.

In 2019, a person looking like Poundcakes was glimpsed in a Bar With No Name. It might have been another woman using Pouncy’s old costume, now that Poundcakes has apparently reformed. 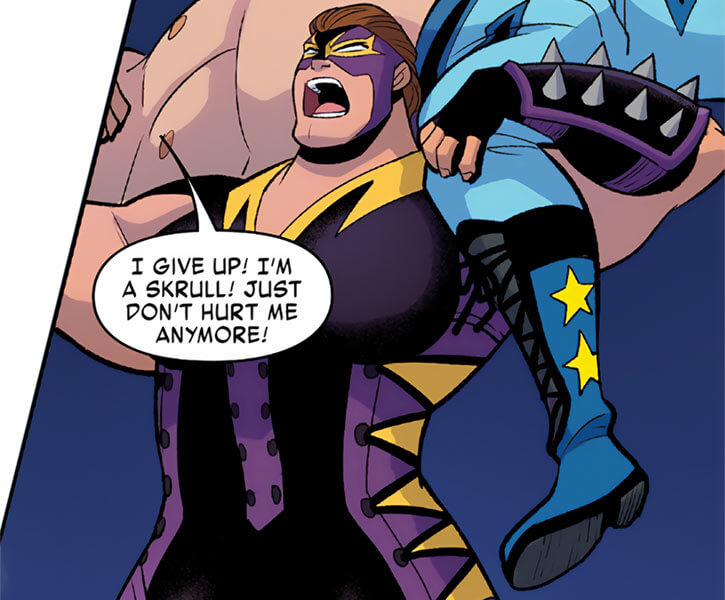 At first, Poundcakes was shorter than the others, and not particularly thick. Her visuals as the big brawny butch of the lot came later, mostly after the Power Broker enhancements.

(And some Dazzler Vol. 1 #13 panels, but her size there keeps changing.)

She has a working class New Jersey accent, though how pronounced it is varies. I’d imagine that she plays it up as part of her wrestling persona.

By 2011, she had switched to a black leather costume. By 2017, she had a new wrestling costume designed by the Wasp (Janet van Dyne). 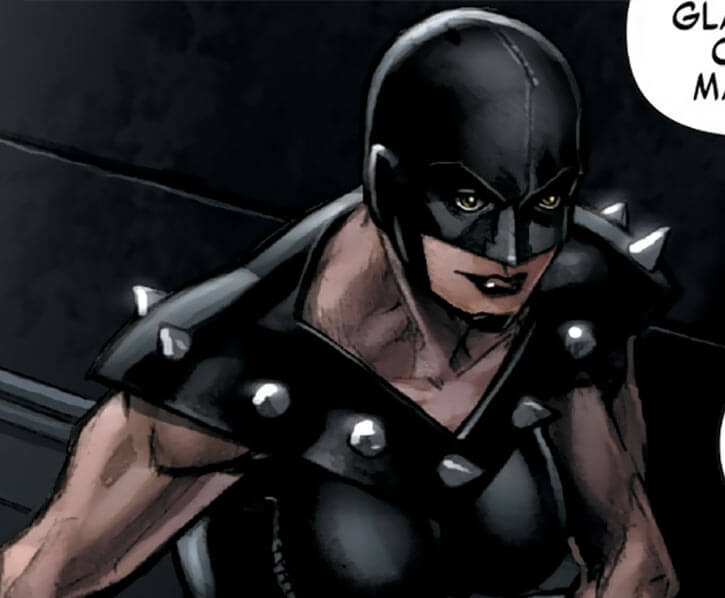 Both Poundcakes’ ring persona and actual personality is a no-nonsense, hard-nosed, blue-collar goil from the Jerz. She’s proud of her strength and training, and likes fighting.

She also has a boisterous, in-your-face style. Early on, she didn’t seem to get along well with the others.

Ms. Pouncy was highly invested in her wrestling career, and frustrated when she couldn’t pursue it. She loves performing in public, her costume and persona, introducing herself to fellow bar patrons as a wrestling star, having fans, etc..

Chatting with Poundcakes about her career, or wrestling in general, is a reliable way to have her drop whatever she was doing to talk shop.

In contrast, when working as a mercenary, she does the job and that’s it. 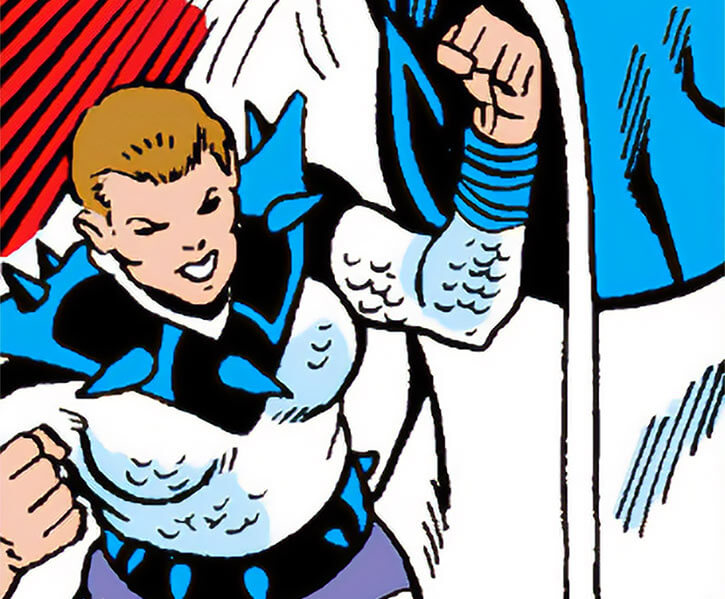 (In the ring) “Put a sock on the chatter, sweetie, and just make with the moves !”

“Want to trade punches, creampuff ? Fine with me !”

“You may have taken me by surprise with some fancy tricks you learned in ballet school, pipsqueak. But now I’m ready for you, and when I’m ready… nobody gets the drop on me ! Nobody !”

“Look, Romeo, a wrestling superstar like me has a reputation ta worry about. If I let every two-bit pug hit on me in public like you did…” (WHOMP !)

Poundcakes is the clearest Female Fury equivalent, as she resembles Stompa. 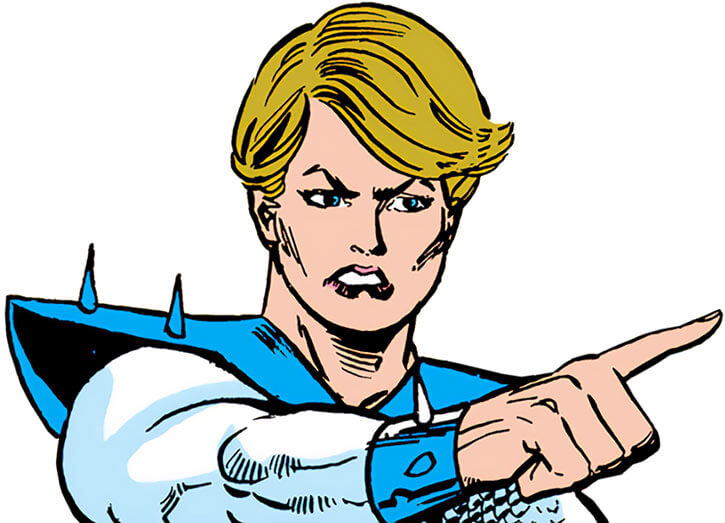 Her Martial Artist is excellent by realistic standards, but it apparently didn’t translate well to pro wrestling. She’s good at pounding the crap out of people, but in-ring performance is a different skill.

There’s zero data about her body armour. So I am *assuming* robust metallurgy, but also a design that doesn’t hinder her or makes noise – and thus doesn’t provide that much protection.

So it could save her life, is easy to wear, and wouldn’t have come into play in her published material.

Yes, she becomes strong enough that the COSTUME’s usefulness sharply drops off. In fact I suspect that at this stage she’s just wearing a cosmetic replica, as the actual chainmail is by then too damaged and too expensive to repair.

(The artists eventually drop the chainmail texture from her outfit, making it look like a standard super-costume.) 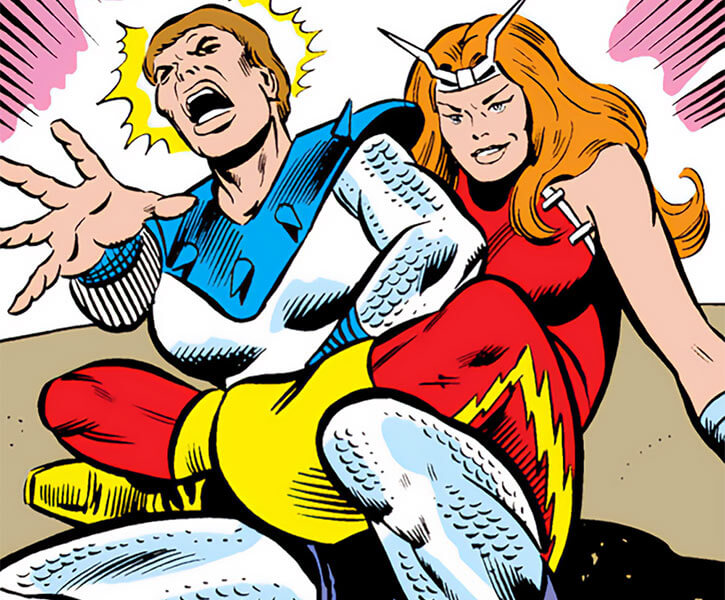 I would *hypothesise* that she hit STR 09 BODY 07 during the mid-2005s. Since she performed fairly well against U.S.Agent some years earlier.

By 2017, she seems back to her Stage 2 enhancement levels. Whether she still has her seismic boots is unrevealed.

She also had Familiarity (Security guard). 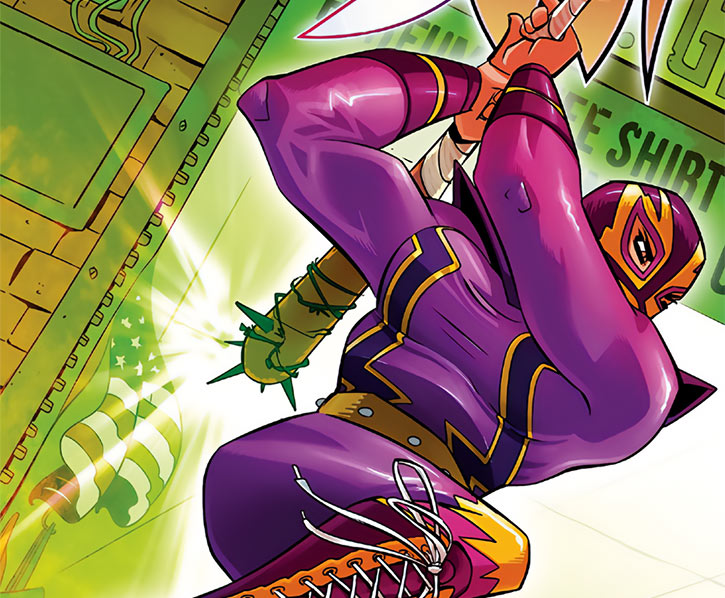 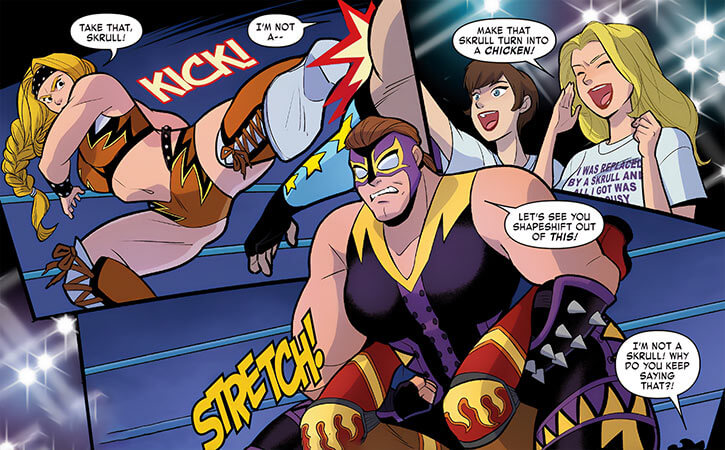 These M&M stats are based on our older DCH stats, and thus less detailed.

Whilst working for Roxxon she wore a custom-made costume which seemed to incorporate chain mail, strength enhancers (described as “energy elements”) and a pair of “seismic boots”.

When she gains her superhuman strength, her stats change and she stops using the costume. She still has the seismic boots, but her increased brawn results in different stats for those too. 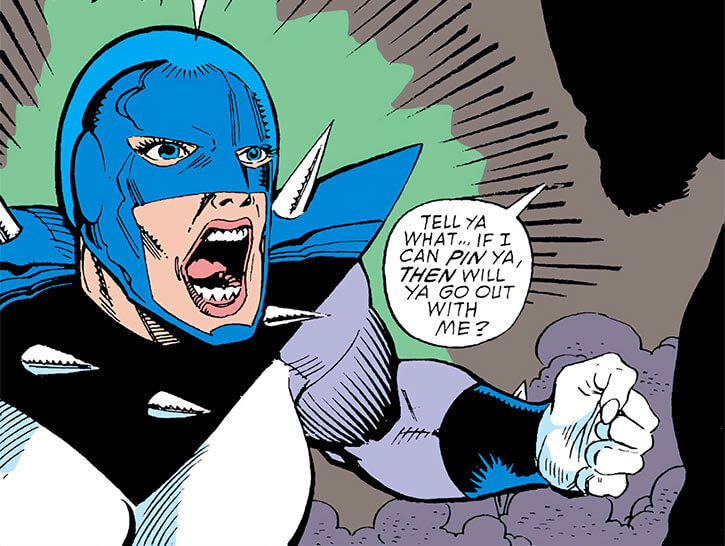