Power Man can absorb and utilise the chi  (or life force) of living things. Having absorbed the life forces of the 107 people who died when he gained his powers, he has a baseline strength which allows him to knock Luke Cage about. He’s also bulletproof, so long as he focuses.

Along with the chi, he absorbed the combat skills of one of Iron Fist’s students who died in the explosion. That makes him a skilled combatant able to just about keep pace with Iron Fist (whether he’s able to absorb other skills with chi is unknown).

The source of his powers was the explosion of Deadly Nightshade’s technology designed to harness bioelectric energy from the environment. However, Iron Fist assured him his powers are mystical in nature.

Deadly Nightshade can neutralize his powers should she wish, so long as he’s within range of the bioelectric signal she uses to block them. Other factors also seem able to cut Victor off from chi energy sources.

Victor is the son of the super-villain Shades. He didn’t see his father much growing up, having only his mother around.

His father came back into their lives after going straight and becoming a community activist. Yet the relationship remained fractured. Victor was arguing with his father when their apartment block was blown up by Bullseye.

107 people died in the explosion, including Shades. Victor survived, spontaneously developing powers. When he got out of hospital he and his mother moved in with her brother and his family.

Needing money for their own place, Victor secretly adopted the Power Man identity, and advertised his services on Craig’s List .

The site of their old home had become the Shadowland complex from which Daredevil and the Hand ruled the area. Victor had to avoid the Hand, who patrolled to keep the costumed population out. Yet he eventually ran into them when recovering a runaway from the pimp, Cornell Cottonmouth.

The ninjas recognised his moves as taught by Iron Fist (Daniel Rand), whom they confronted. He had no knowledge of Victor’s identity, but the encounter got him and Luke Cage searching for Victor.

They easily ambushed him, and he quickly lashed out at Cage. They were forced to work together when attacked by old enemies of Cage and Fist sent by Cottonmouth’s employer.

The way of the Fist

After the fight, Cage seemed to recognise something in Victor and decided to let him keep the name. Iron Fist remained curious how Power Man knew a move only one of his students had been able to perform. Realising his student had died in an explosion with a single survivor, Iron Fist easily tracked him down.

He found Victor a captive of Deadly Nightshade and Cottonmouth, who’d trapped him. She neutralised his powers, explaining they came from a pair of Shades his father had commissioned her to make before he decided to go straight.

Caught in the explosion, the glasses were responsible for giving Victor his powers… and allowing her to neutralize them. She offered Victor a job, provided he finished off Iron Fist.

Victor turned on Deadly Nightshade and Cottonmouth. She escaped, and before they could give chase the chaos of Shadowland caught them. Victor learned the ninjas he’d fought had abducted his cousin, Sofia, the only family member who knew his secret.

Rushing ahead of Iron Fist, Victor found himself in another trap. The ninjas had sacrificed themselves to summon a manifestation of the Beast to kill him.

It nearly succeeded, but seeing the ghosts of the 107 who’d died there, Victor deciphered his father’s signals. Power Man absorbed as much ambient chi as he could. Growing to match the Beast’s manifestation, he beat it.

The Comedy of Death, part 1

Iron Fist offered to train Victor with his chi powers. He also set him up with a job to explain to his mother where the money he’d made as Power Man had come from – her militant pacifism made him reluctant to tell her the truth. The Alvarezes they moved into their own place.

His snooping was interrupted first by the shadowy Noir, who left him tied up. The dangerous Commedia Dell’morte then came in, and tried to kill him in the search for their abducted member, Columbina. Iron Fist arrived in time to help, but the pair had a fall out afterwards about Victor’s impatience.

Studying at the Alison Blaire School for the Performing Arts Victor met Tiowa Bryant. When she found an auction for Coulmbina’s mask he began to suspect her of being Noir. She got them invites to the exclusive auction, where they ran into Danny and Joy Meachum, also investigating.

They got caught up in the games of Pokerface, who set Power Man up to fight his flunkies so guests could gamble on it. Victor won, but in the chaos Iron Fist caused a leak in the undersea complex, necessitating an evacuation, and Joy is possessed by the mask, becoming Columbina.

The Comedy of Death, part 2

Power Man encountered Pokerface during the flight. Seeing someone with a piece of metal through his head Victor pulled it out, doing no telling what damage to the villain. Tiowa disappeared in the chaos, turning up safely later. This increased Victor’s suspicion when he heard Danny had encountered Noir.

Arranging to meet up with Tiowa, Victor found himself caught in yet another trap. This time it was the head of Penance Corporation, Duffy. The company ran the prison where Jennie is held, and Crimebuster had been one of its directors.

Crimebuster had realised Duffy was actually Gerry Kammill, founder of a prison supremacists gang. He was using Penance to sell drugs inside. Duffy arranged to have the mask stolen and sent to Crimebuster, where Jennie was taken over by it and killed Crimebuster.

Iron Fist arrived to rescue Victor, Tiowa, and Jennie. He was accompanied by the Commedia Dell’morte, to whom he promised revenge on Columbina’s abductor in return for releasing Joy.

Duffy fled, only to be killed by Noir. Noir never had been Tiowa, but the daughter of the founder of Penance, whom Duffy killed. Columbina released Joy, and Danny hired She-Hulk to clear Jennie.

When the Serpent’s campaign of terror swept over the world, Victor found himself teleported onto an odd ship in the middle of the ocean. He was among Amadeus Cho, X-23, Thunderstrike (Kevin Masterson), and Spider-Girl (Anya Corazon).

They fought the Serpent’s army of Shark Men, and prevented the Hell-Carrier crashing into Honolulu. But upon learning that Cho was responsible for bringing them there in an attempt to create a group, they soon departed in disgust.

Victor was soon enrolled at the Avengers Academy in California. It’s unclear what excuse was used for his mother, but the Academy was closed down soon after anyway, and he returned home.

Cocky, brattish, and overconfident, Victor is prone to impulsiveness. He often rushes into situations without thinking. He has an astonishing track record of getting caught in traps because of that.

He’s not stupid, and when he takes time to think things through he realises his shortcomings. Being a teenage boy, he won’t actually admit them to anyone of course.

Victor was initially mercenary in the way he operated – although the jobs he took generally saw him acting against criminals and the corrupt. This was due to his need to contribute to the family so he and his mother could have their own place. Once Danny took care of their financial problems with Victor’s fictitious job, he slipped into a more heroic role.

He has trouble with male authority figures, in a teenage conflict-prone kind of way. This causes friction in his relationship with Danny. He does respect his mentor though, and wants to learn.

Victor doesn’t want his mother knowing what he does. She’s a militant pacifist, worried he’ll follow in his father’s footsteps, and wouldn’t approve of him fighting.

Client: “You… you a real super hero, mi‘ijo ?”
Power Man: “Real as you’re ever gonna see in Spanish Harlem, bro.”
Client: “But… you charge money ?”
Power Man: “Like the man said: you do somethin’ well, never do it for free.”

Luke Cage: “You stole my name !”
Power Man: “You weren’t using it ! I’m coverin’ neighbourhoods you two forgot about a long time ago !!”
Iron Fist: “Yeah. For a price !”
Power Man: “That’s how folks round here know they can trust me. They know I’m not just gonna run off to Mars or Atlantis, like every other do-gooder with bad fashion sense ! I live here ! I’m one of them !!”

[After being shot in the back of the head]
Iron Fist: “Vic ! Are you—”
Power Man: “Dude ! Sssshhh ! You’re embarrassing me in front of those half-naked chicks over there !”

“Yo. You beat. You got beat when I woke up this morning. Smart man would skip the pain and step aside. But I understand. You got professional dignity to worry about.”

Victor occasionally gets flashes of memory from the chi he’s absorbing. Examples include flashes from Iron Fist when they were fighting, or the background of the Samebito (Shark Men) when they were nearby. This is an (as yet) uncontrollable use of Mind Probe, usable at the GMs discretion.

Power Reserve draws on the chi surrounding him. While it doesn’t draw anything from nearby life forms, there need to be enough nearby (within a mile) to fuel the power. In a densely populated area such as a city he can access the full 6 AP, but in more sparse areas this will reduce.

As his powers are derived from Deadly Nightshade’s technology, she’s capable of building devices which can block them. In this case, or if some other factor cuts him off from absorbing ambient chi, he loses all his powers, and his Physical Stats drop to 04/02/02.

The Actor Subskill is unproven, but he’s studying at the Alison Blaire School for the Performing Arts, where acting is one of his classes.

He’s bulletproof enough to take being shot in the back of the head. Yet after being confined in Noir’s goop he was worried about being unable to get his chi force field back up in time to avoid being stabbed.

I’m assuming some factor of the goop cut him off from the chi, triggering his Loss Vulnerability. While it’s described as a force field, in practice the higher Body works better than Force Field.

Kinetic Absorption is there because Iron Fist’s iron fist is written up as a Shtick which allows greater HP expenditure, so Neutralize won’t really work. 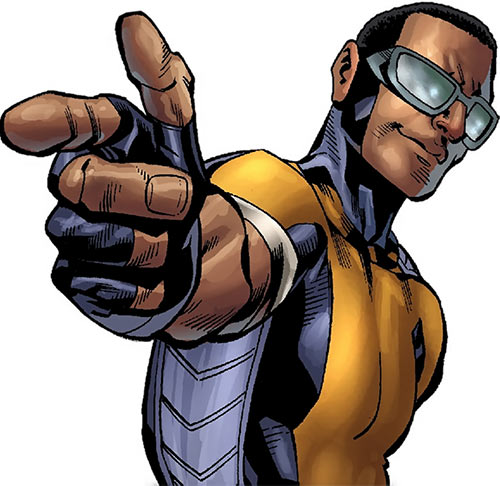 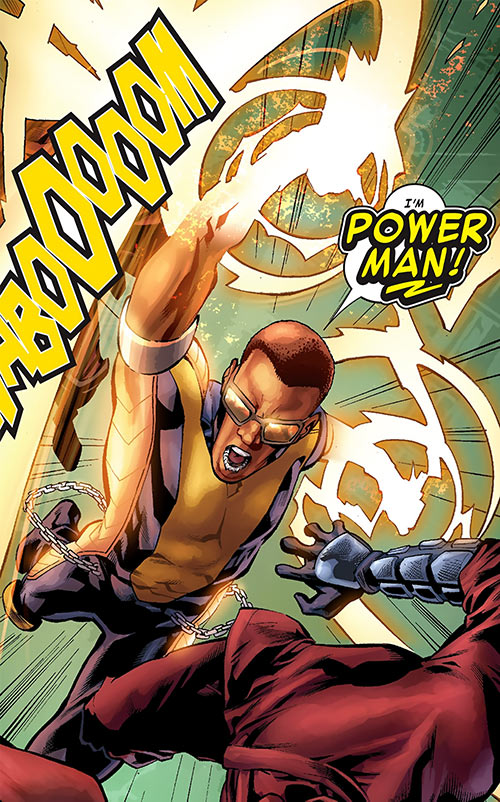 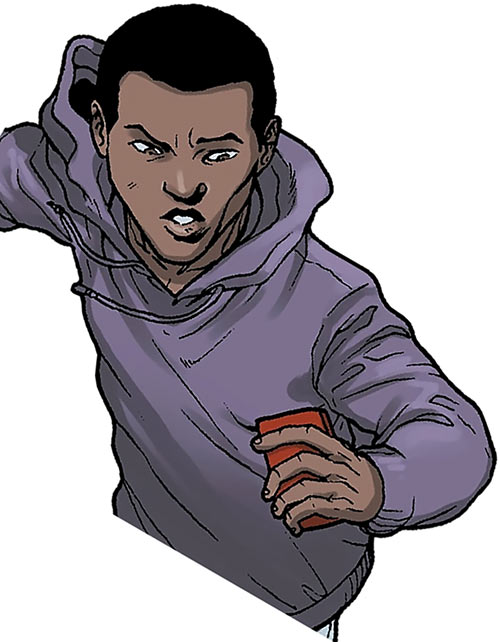 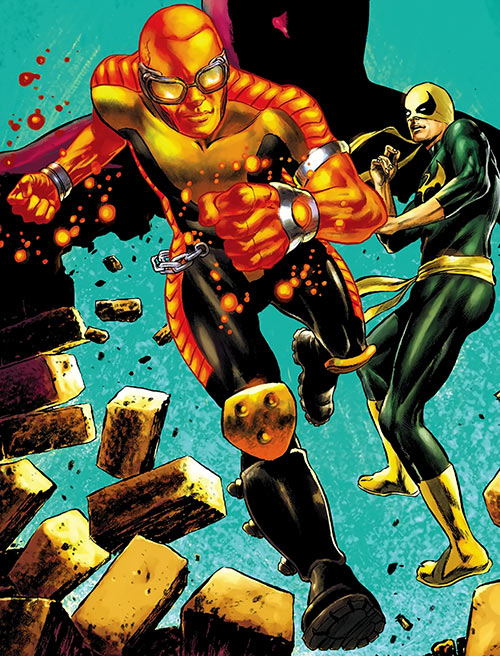 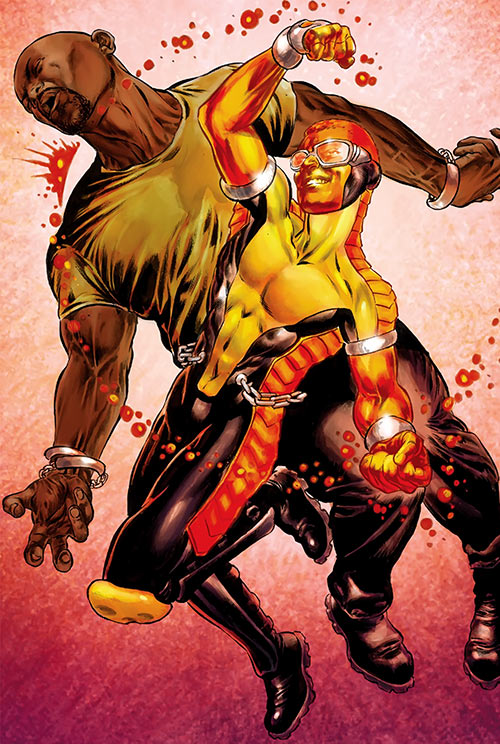 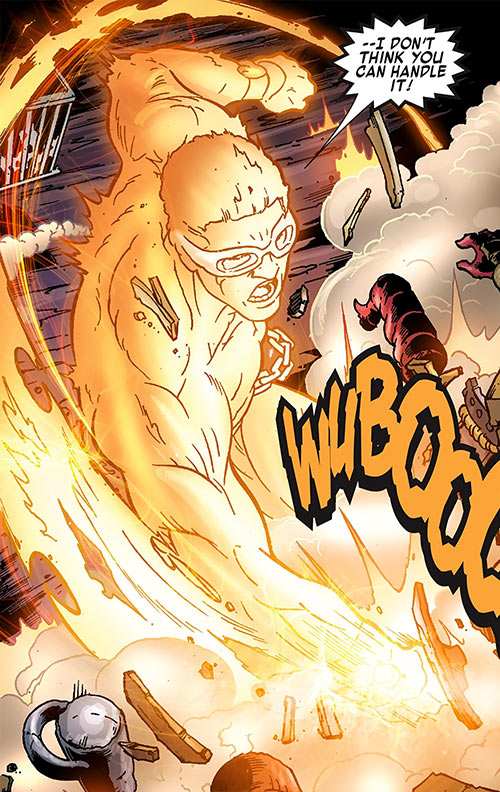