Power Pack is a distinctive Marvel Comics super-hero team. It appeared in 1984 in its own book, as crafted by Louise “Weezie” Simonson and June Brigman.

The Power Pack members are children, and they are depicted in a relatively naturalistic fashion. They generally behave as kids their age would, as opposed to the cartoonish and oddly stylised depictions of kids in most previous comics. Like, say, the super-kids.

Family dynamics are also important in the book, the Power Pack being siblings.

The stories further strike an interesting balance in being set in the wider Marvel Universe yet using some children’s books story beats and perspective.

Our Power Pack profiles are focused on the 1980s – when they were written by Ms. Simonson. Later material doesn’t have writeups.org coverage yet.

Modus Operandi:
The Power Pack generally patrols the city (after school and on weekends of course) or deals with danger when they stumble across it.

Extent of operations:
The team is generally limited to adventuring around or across Manhattan Island, New York City.

Bases of Operations:
Their parents’ apartment. 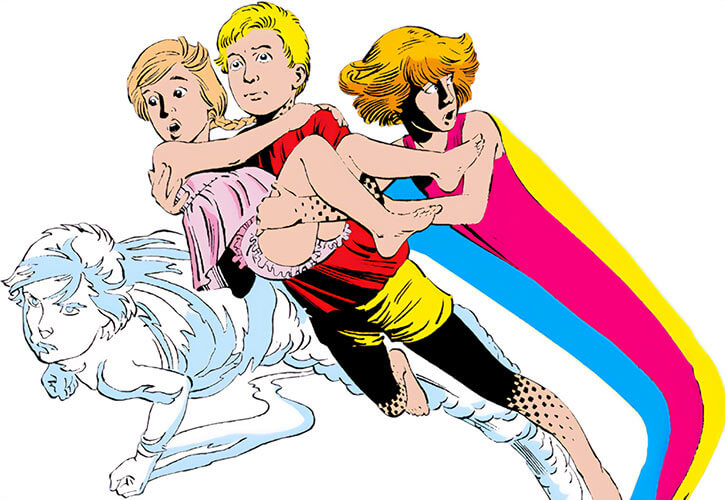 Organizational structure:
Informal, but they take their lead from Alex Power (Gee). 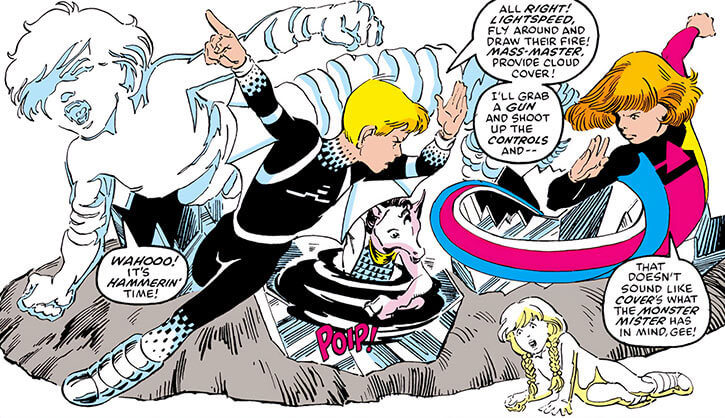 Dr. James Power created a device that generated large amounts of cheap energy. But as he prepared to share his success with the world, he was being watched from afar. His watcher’s name was Aelfyre Whiteman.

Aelfyre (who went by the name “Whitey”) was a member of the Kymellian species. These advanced aliens had created a similar device in the deep past.

But while it seemed to work, this technology turned out to be uncontrollable. In the end, it set off a chain reactions that destroyed the Kymellian homeworld.

Whitey, having monitored the Earth for some time, had gained a deep affection for humanity. Unwilling to see them come to harm, Whitey set out to warn Power of the danger of his invention.

Before leaving, he transmitted a warning to his people and informed them of his plan.

Unfortunately, the Z’nrx intercepted his message. These were a race of reptilian conquerors who saw the device as a weapon of great potential. Even as Whitey left, the Z’nrx set out themselves to steal it.

The Z’nrx (often called “Snarks”) ambushed Whitey as he approached the Earth. Whitey’s ship, Friday, was damaged during the attack. Unable to fly any longer, she came to rest in the Atlantic Ocean close to the Powers home.

As fate would have it, the Power children were watching the night sky at that very moment. Curious, the kids went down to the beach to investigate the crash.

While they were there, the Snarks attacked their home. They captured Dr. Power and his wife Margaret with ease.

Whitey and the children fled from the Snarks aboard Friday. While Friday had managed to repair herself enough to fly, she still couldn’t reach her top speed. The Snarks ran her down in short order and caught her in a tractor beam.

With all avenues of escape closed, Whitey took a desperate gamble. He used what little remained of his strength to transfer his powers to the children. The process took but a second and at its end, Whitey disappeared in a flash of light.

When the light faded, the four children found themselves possessed of Whitey’s powers.

The kids then used their wits and new powers to: 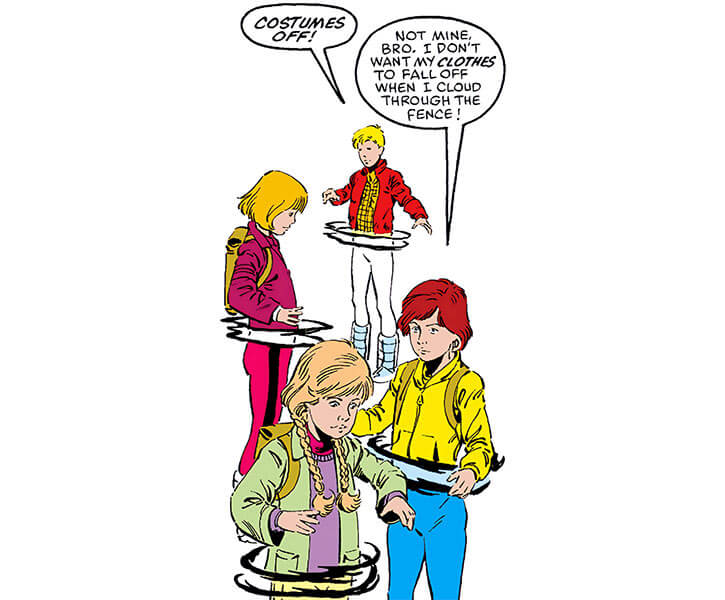 After the Snarks left, the Power children realized that their parents had no memories of the past day.  The sedative that the Snarks used to subdue them had erased these recollections.

The kids decided to keep their powers a secret and helped their parents to recover.

Once things had calmed down, the Powers decided to move from Virginia to New York to get a fresh start.

New York’s large superhuman population fascinated the Power children. They gave themselves code-names and decided call themselves the “Power Pack”. With that, they started to look for adventures in the Big Apple.

During this time, they met many heroes, including Spider-Man (Peter Parker), Thor (Thor Odinson) and the X-men.

They had a knack for finding trouble, and got involved in a variety of dangerous conflicts. They fought in the Morlock Massacre  , klashed with Kurse, and participated in Inferno  .

With every appearance, the kids endeared themselves with the heroes around them. 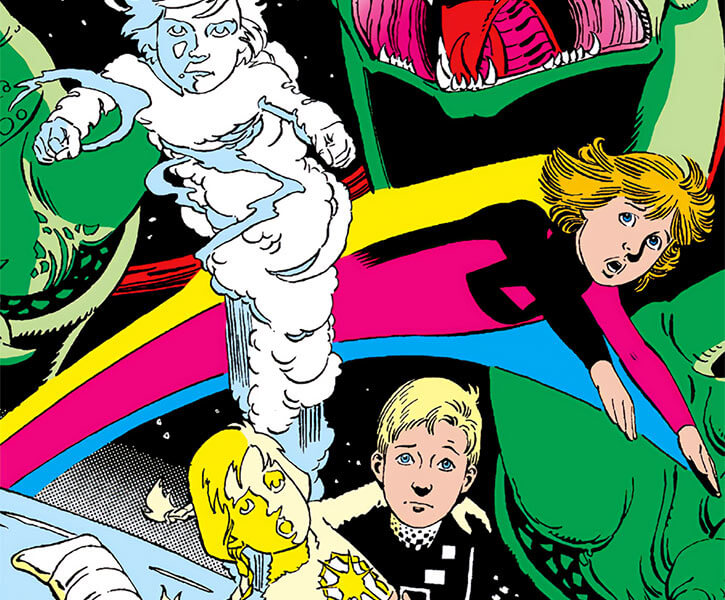 One day, a young boy about Katie’s age approached the kids. His name was Franklin, and he claimed to be able to see the future. He warned them that an augmented Snark named Jakal was coming for them.

While the Power kids disbelieved him, they decided to give him a chance.

To their shock, Franklin led them to a young Kymellian named Kofi. As it turned out, Kofi was Whitey’s cousin, and he had come to warn them of Jakal’s arrival.

Furthermore, Franklin revealed that he was the son of Reed and Sue Richards.

Thanks to Franklin’s warning and Kofi’s help, the Power kids managed to defeat Jakal.

While Friday took the Snark to the Arctic for safe keeping, the Powers offered Franklin a place on the team. Franklin graciously accepted.

The team continued to have grand adventures together. But it all came to a crashing halt when Franklin had a vision of the Snarks returning to Earth. The Powers chalked his visions up to nerves and ignored his warning.

They took them back to Snark World, where the clan queen Maraud stole their powers, except for Katie’s. Katie managed to escape and hide from the Snarks for a time.

Maraud used Jakal to seize control of Snark World from its ailing emperor. While she did so, Franklin arrived on Snark World aboard Friday. He used his powers to save Kofi from capture, and the two then saved the Snark Emperor Bhadsha.

With Snark World in hand, Maraud decided to kill the Power children. When Jakal prepared to do so, Katie reappeared and surrendered to save her siblings. Ever greedy, Maraud goaded Jakal into taking Katie alive so they could steal her powers.

Which Power was mine again?

Unfortunately for Jakal, the powers proved to be too much for a single Snark to contain. In a fit of rage, he destroyed Maraud’s power transfer device and gave the Power’s powers back to them.

In a strange quirk of fate, he somehow jumbled their powers up and returned each one to a different owner.

In the process, Jakal perished and Maraud lost her throne.

Soon thereafter, the Power children returned to Earth. Once there, they continued their adventures.

Over time, the Power children’s powers swapped back and forth several times. But they settled on their original powers upon the conclusion of their adventures. 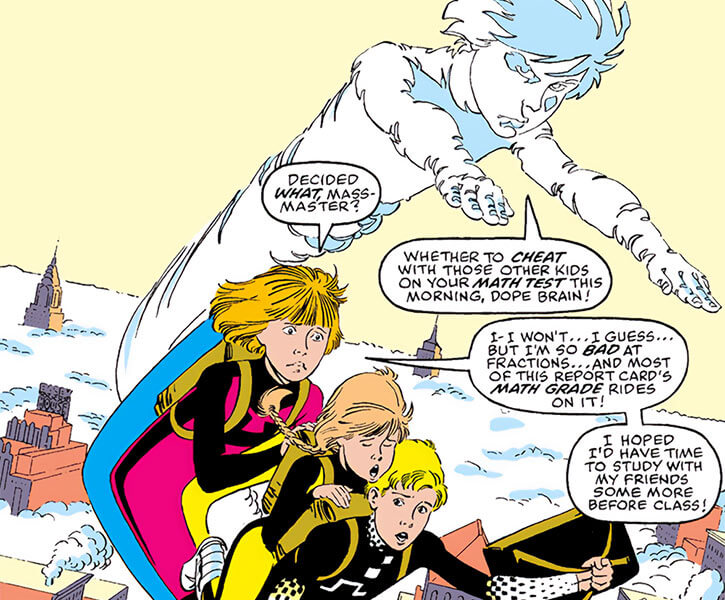 The team shares some equipment that is worth statting.