Power Princess possesses vast physical strength, agility and toughness. She is powerful enough to defeat a small army or some armored cars and is considered the world’s second most powerful after Hyperion. In combat Zarda uses proper tactics in addition to physical strength.

She can bring forth a transparent and indestructible shield for both defensive and offensive purposes from the armbands that she wields. While being used defensively the shield is being stuck to the armbands and blocked with and Zarda also uses it for flight. Offensively it may be thrown great distances and even cut through steel.

History ? A heavy lot ! In some other write-up perhaps, even though most Marvel fans should know all about the Squadron Supreme, their Earth and the Utopia-program. And perhaps even about their exile on the ordinary Marvel-Earth in the Quasar comics ?

Zarda is a member of the Utopian race. The Utopians resided on the Utopia Isle and had been isolated from humanity since its inception. Each member of the race were very powerful both physically and mentally as an effect of early genetic experimentation by the alien Kree race.

The race developed a culture based on the acquisition of knowledge and they succeeded in eliminating all poverty, injustice, sexual discrimination, war and crime. Thus they called themselves the Utopians.

However, when the outside world developed the atom bomb they believed that their existence was threatened and so chose to leave the world for the stars in a space craft. Zarda, who had been their emissary during some years, chose to remain on Earth to spread the Utopian philosophy among humanity.

However, man was not easily convinced of the attainability of an Utopia. Zarda had to settle for fighting crime. When first Zarda came to the outside society she met the sailor Howard Sheldon whom she married. They remained married for many decades until Howard was murdered by the Hyperion doppelgänger.

Since then Zarda, by the media called Power Princess, has begun a relationship with the real Hyperion and she still remains a member of the Squadron Supreme.

The Squadron in short

The Squadron Supreme were the Earth’s champions for good, but were used against it under the control of the alien Overmind. After the defeat of the Overmind the world lay in ruins with severe problems. The Squadron initiated a program called the Utopia-program in which they wrested total control of the American government.

The plan was to fix every problem in America and later in the world, problems such as hunger, economy, crime, war, jobs, environment and disease.

Under a Fascistic line they succeeded, but in the end they were opposed by several superhumans and many were killed in the battle that followed. Later on while saving the Universe from the so called Expanding Man they were all exiled from their Earth-S to the ordinary Marvel-Earth by their world’s Wizard Supreme.

Zarda looks like a warrior woman and a model at the same time. Physically she looks a lot like Wonder Woman ; just add a little more muscle and athletic power and you’re there.

She only wears thin clothing resembling a purple bathing suit and purple boots. The legs and arms are bare except for a pair of golden armbands around the upper arms and the lower arms. She also has a long, thick black curly hair and a golden headband. Around her waist Zarda wears a golden colored belt tied up.

Occasionally she wore a golden colored battle armor of steel alloy on Earth-S and different versions of the costume. On Marvel Earth she wears this armor, which covers all formerly covered parts, constantly along with a steel helmet (resembling an ancient Greek warrior helmet).&

In combat she always also carries a transparent shield which comes out of and is attached to the armbands for protective purposes.

Power Princess is a tough, but gentle woman. She preaches for the Utopian way, but as a crimefighter she is very professional and cool. She is very well-spoken and clear and usually works as the Squadron’s spokesperson making a good impression.

Zarda is a character of deed not just thought and prefers to get things done instead of just planning to do them. In relationships she is a very faithful person and the most important man in her life right now is Hyperion.

Her personality is forceful and inspiring and she, together with Hyperion, leads the Squadron.

“Everything I believe in, all the teachings of my Utopian ancestors, cry out that such injustice cannot be allowed to go unopposed.”

Either use the entire Squadron Supreme or the old JLA of which it is a copy. The Squadron Supreme are world leaders and do not fit very well in the DCU. Power Princess is of course a copy of Wonder Woman. Optionally they could of course be used as the premier super team of another dimension or as they are in a campaign set on Earth-S.

Of course, post-Crisis they could substitute for the Crime Syndicate of America. Whether or not they’re evil, the Squadron origins give alternatives to their being other-dimensional counterparts, since the post-Crisis universe disallowed that at the start.

Power Princess, for example, would be an Inhuman from Attilan (the Marvel Earth counterpart of Utopia Isle).

* Without Defensive Roll
** 15 without shield 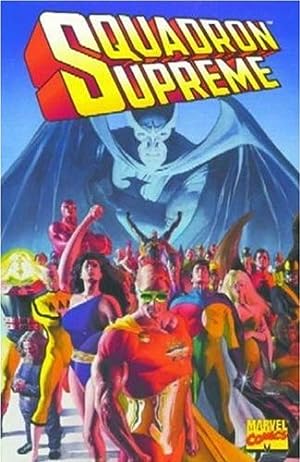 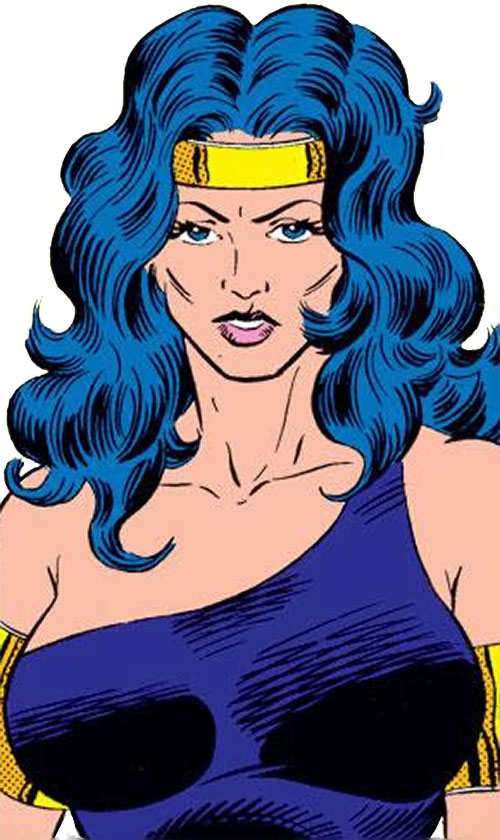 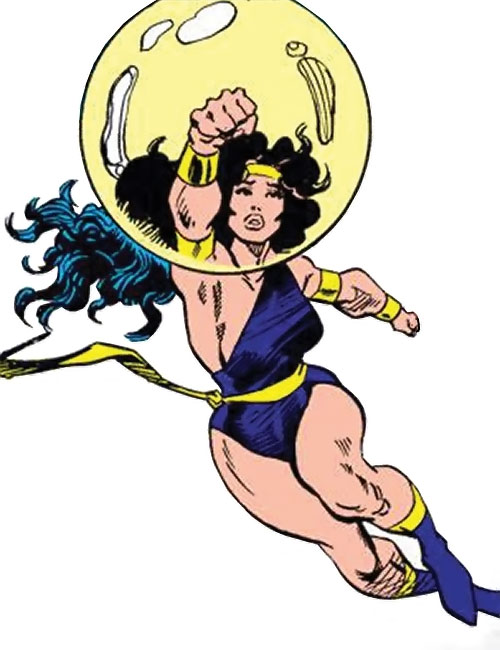 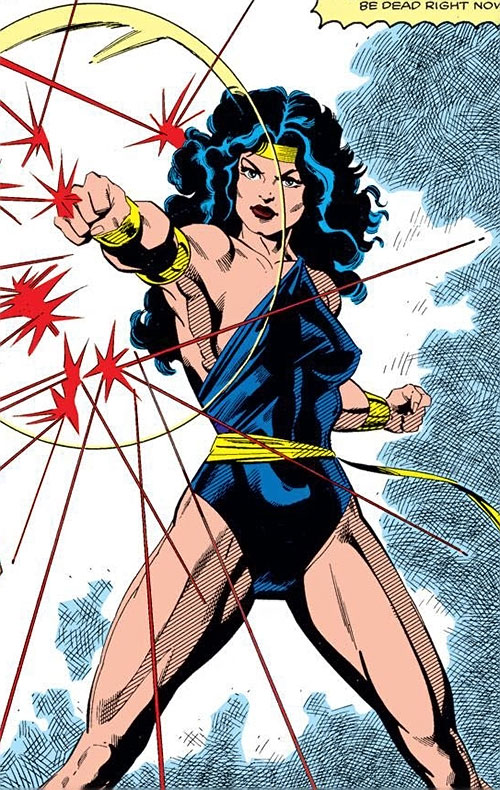