Power Ring is an ordinary young man except for the mystical ring bonded to his hand. This ring has the ability to form objects out of mystic green light based on Power Ring’s mental commands. Whether this is based in part on attributes of the user as is the case with Green Lantern power rings is unknown. Comments by Power Ring II indicate that willpower is definitely not a factor.

The ring is inhabited by a spirit called Volthoom. It is forced to follow the ring wearer’s orders but also drives the wearer to use more and more of its power.

The effect of this is that all people of the anti-matter Earth have, in DC Heroes terms the equivalent of a Catastrophic Irrational Attraction to repaying debts when the marker is called. On those few occasions when people violate this rule, whatever passes for the local authorities will quickly bring the offender in for trial.

This version of Power Ring was actually erased and replaced by a revised version during this same restructuring. But it is possible that he might return in some manner in the future.

The Crime Syndicate of Amerika is the JLA of an Earth in an antimatter universe where good is evil and evil is good. Benedict Arnold was the first U.S. President, Washington was a traitor, Britain fought for its independence against an Amerikan colonial power, etc.

It is a reversed DCU. By large, things are pretty upbeat in the DCU and people are generally happy, secure and open to the wild and the novel by virtue of living in a world where good always triumphs in the end, thanks to colorful superheroes.

On the other hand, the dreary inhabitants of the antimatter world live on a planet dominated by lies, greed and hypocrisy. If that world sounds all-too familiar, then you’re just too cynical by half… There vice and corruption are a way of life and the bad guys always win.

Here crime is the founding principal of society. Evil is rewarded, cruelty is lauded and people live everywhere in fear of their masters. This goes all the way through the local mobs and the corrupt police, the bent journalists and up, through City Hall and the governments, to the top of the pyramid – the seedy Crime Syndicate of Amerika and its vicious bullying leader, Ultraman.

The CSA rules their Earth with an iron fist from their lunar headquarters, the Panopticon (“The place of wide vision” or “watchtower”). Their motto is “Cui Bono”: Who Benefits. (Interview with Grant Morrison)

Power Ring and Johnny Quick act as liaisons between the CSA proper and the lower elements of the Crime Syndicate — organized crime heads, presidents, etc. It’s not a particularly enjoyable duty, but as the junior members of the CSA, Power Ring and Quick don’t have much choice. (JLA: Earth 2)

Power Ring’s personal history is largely a mystery. He received the ring when he accepted it from his predecessor (JLA: Earth 2). Thus, there was at least one prior Power Ring and accordingly this Power Ring is numbered the second in this writeup.

A brown-haired Power Ring wearing the pre-Crisis Power Ring’s uniform was depicted in a flashback panel. It is unrevealed whether this was the current Power Ring’s only predecessor or if there were other Power Rings prior to that one or in between that Power Ring and this one. (JLA Secret Files and Origins 2004)

The matter of matter

The CSA’s dominion was temporarily disrupted when the last free superhero, Alexander Luthor, traveled to the matter Earth. There he convinced the Justice League to intervene on the anti-matter Earth.

The CSA launched a retaliatory strike on the matter Earth as a prelude to conquest. However, both teams came to realize they could not prevail in the universes opposite their own.

The two groups then discovered that the universal crossover was part of a plot by Ultraman’s servant Brainiac. He had secretly engineered the confrontation to regain his freedom and expand the power of his consciousness. The latter goal required Brainiac to take actions that would have destroyed both Earths.

Working with the JLA, the CSA was able to return to their Earth, after which they took their revenge against their rebellious servant by lobotomizing him. (JLA: Earth 2)

This restructuring of the anti-matter universe removed this version of Power Ring from reality. An alternate version took his place. (JLA: Syndicate Rules).

See the Power Ring III writeup for more details regarding this replacement.

Power Ring is a physically fit white male of medium height with short, spiky hair. His costume is a black spandex bodysuit with knee-high emerald green boots and trim, and the Power Ring logo (a silver badge with a green X on it) affixed to his left breast.

He has a couple of silver bracers on his wrist, but they are purely ornamental. The final touch is a set of large mirror shade sunglasses with a thick green frame. He wears the power ring on his right index finger.

Power Ring is a thrill-seeker and a troublemaker, constantly seeking opportunities to use more and more of the ring’s power. He particularly delights in torturing the populace with ring-created Boschian  monsters and inflicting all-out carnage on large armies.

Power Ring has a special contempt for “old people” such as his predecessor. That caused him to underestimate Aquaman to his great misfortune.

Volthoom is a subversive servant, compelled to follow the ring wearer’s orders and to be honest with him. But it also mocks him and seduces him with its powers by turns. Volthoom usually speaks in a formal manner, but occasional bits of informal speech slip in. It takes on a conversational tone at those moments that it is most blatantly feeding the wearer’s lust for power.

“Wish I’d never seen this ring. Bastard told me it was a curse but I was too dumb to care… but hey ! I got the power ! ”

Power Ring: “Ring ! More power ! Give me MORE !”
Ring: “Of course, young fool. Volthoom gives you all you desire, and more…”

Drawbacks:
CIA (finding suitable targets on which to use the ring’s full power, was only an SIA during the first encounter with the JLA).

Pet:
RING OF POWER [BODY 20 INT 06 WIL 08 INF 06 AUR 08 SPI 20, Acuity: 15, Awareness: 12, Flight: 14, Force Field: 12, Force Manipulation: 24, Sealed Systems: 11, Scientist (Analysis, Observation): 10. Drawbacks – Ring constantly makes inane observations in the wearer’s voice ; the Ring cannot be removed from wearer unless given to another by mutual agreement ; the Ring slowly causes the wearer to develop an Irrational Attraction to using its power; though the Ring may have a different agenda than its owner, it has a CIA to following the owner’s orders. Bonuses & Limitations:

A common trick that Power Ring (and Green Lanterns) perform is to provide life-sustaining auras around teammates without Life Support or Sealed Systems when circumstances warrant. This usually happens when the CSA is fighting in space.

In such instances, Power Ring will place individual 1 AP Force Fields around each other person that needs protection. This provides them with the benefits of his Sealed Systems without reducing his Force Manipulation APs any more than necessary.

These protective auras are usually projected around each person separately so they can move without restriction rather than being forced to remain clustered together. Assuming individual movement isn’t a tactical necessity, such as during a reconaissance mission, Power Ring will place everyone who needs protection in a single force-construct bubble to minimize the number of APs of Force Field in use.

Get on the Bus

Since some of those same teammates may need transportation as well, Power Ring will sometimes simultaneously create transports as needed, such as a glider for Owlman or a treadmill that channels running speed into Flight for Johnny Quick. If necessary, he will do this simultaneously with a protective aura.

As with the protective auras, he will make individual vehicles if needed for tactical advantage or place everyone in a single vehicle if separate movement is unnecessary (while simply ferrying people from one place to another, for example).

Since each Force Manipulation AP used in a vehicle is one he cannot use for other purposes, Power Ring will cease projecting a vehicle as soon as the user no longer needs it.

By Roy Cowan and John Colagioia. 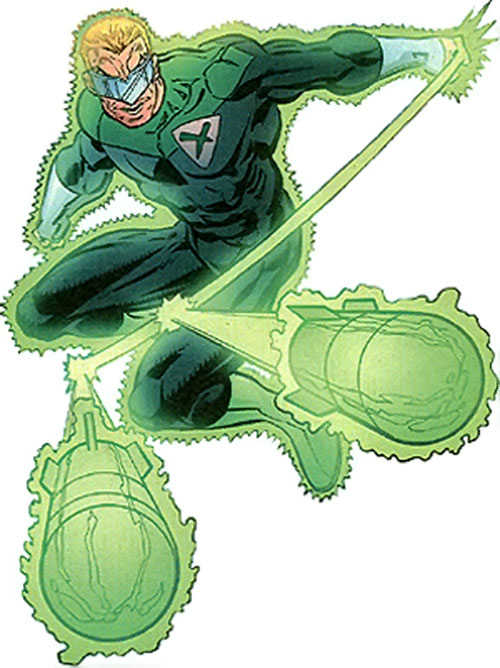