Powerhouse can absorb energy in his vicinity, depleting machines and superpowered beings, and charging himself with superhuman strength.

He tends to grapple his opponents, usually from behind, draining their strength to fuel his own, making it harder for them to break free.

Rieg Davan was a Xandarian Syfon rank warrior. He had been sent to investigate an alien star ship believed to be on its way to invade his homeworld. On his way home, the ship was hit by a comet, and eventually crashed into an ocean on Earth.

The unconscious Rieg and his ship were discovered by the criminal Condor, who took them back to his Aerie. Learning that Rieg had powers, the Condor decided he could be useful.

When the alien woke, the Condor told the amnesiac Rieg, that he had rescued him from the ocean. He also told him he had found him near a cruise ship full of people who had had the life drained out of them.

He gave Rieg the name Powerhouse, and repeatedly remind the young man at every single occasion how he had saved his life, given him a home, helped him understand his powers and so on, making Powerhouse his reluctant ally.

Condor had Powerhouse assist him on a robbery, which was spotted by Nova. When the young hero intervened, Condor ordered Powerhouse to battle him.

During the fight, Powerhouse accidentally destroyed what Condor had been trying to steal. The Condor flew off in a rage, leaving Powerhouse to fend for himself. He seemed to have the upper hand over Nova, but the inexperienced superhero won the fight by gambling that a fire extinguisher could put out Powerhouse’s power.

Powerhouse was held prisoner by the authorities in a device that neutralised his powers. That lasted until he was broken out by the Condor and his new ally, Diamondhead. During their escape, they also managed to capture Nova.

When Condor’s equipment revealed that a spaceship belonging to those who had empowered Nova was hidden in orbit around Earth, he decided they should loot it of weapons.These would be used against his enemy, the Sphinx.

Brainwashing Nova to help them, they modified Condor’s craft to travel into space, and headed to the Xandarian craft. Nova broke free of Condor’s control while there and battled them. But the trio managed to seize some of the weapons and flee.

The three began assaulting the Sphinx’s bases, and eventually came face to face with the Sphinx himself. Their assault failed, in part due to Nova returning to battle them. Condor was rendered mindless, and turned into a real condor. Diamondhead was buried in a mountain. Powerhouse had his memory erased again and was transported to London.

The amnesiac Powerhouse began building a new life for himself. This continued until Nova came looking for him some time later. He had been dispatched by the Sphinx, who had taken control of the Xandarian ship.

Nova’s appearance brought back his memories of his time on Earth. But, when he was taken aboard the Xandarian ship, his full memory was restored. When he learns that the Sphinx plans to use them to crew the ship for his journey to Xandar, Rieg agrees to accompany them, happy to be going home, but wary of the Sphinx’s motives.

They reach Xandar, discovering that, following Zorr’s attack, it still survived as four artificial planetoids. They arrive during a Skrull  invasion, and the Sphinx takes advantage of the situation to extract the information he requires from the Xandarian computers.

Becoming empowered by this, he leaves, abandoning the others, who aid the Xandarian defence. Nova, Comet, Crimebuster, Diamondhead and Powerhouse spend several months helping fight the Skrulls, earning the name Champions of Xandar.

Diamondhead, Crimebuster and the Comet accompany the Nova Corps on a foray against the Skrulls. Their mile-long Nova ship appears to returns to Xandar, but it is actually crewed by Skrulls. Once through Xandarian defences, they shapechange and attack. Nova, Powerhouse and Rom help the Xandarian civilians resist the invasion, and Nova attacks the ship directly, breaching the hull.

He fights and expels Diamondhead, who has allied with the Skrulls, letting them board the ship. Crimebuster discovered this and was killed by Skrull soldiers in front of the Comet. Immediately, the Comet and all the Nova Corps were banished to another dimension by Diamondhead, using on-board lifesaving equipment.

The bloodthirsty Skrulls disliked this and blamed Diamondhead for preventing them from killing their enemies. Still, the alliance held.

After Nova gains control of his ship, he summons back the Chanpions and the Nova Corps. The Xandarian forces win, and the surviving Skrulls are arrested. Diamondhead is left drifting in space.

Powerhouse was killed some time later, along with the other Xandarians, when Nebula used Sanctuary II (the former flagship of Thanos) to destroy Xandar.

Powerhouse was always very recalcitrant in committing crimes and fighting along with the Condor. However, he simply couldn’t bring himself to betraying his “benefactor”. That was true no matter how much he wanted to cut ties or disapproved with the Condor’s activities.

When he regained his memories, he became more confident in himself. A loyal servant of Xandar, he is devoted to his home, willing to lay down his life in its defence.

“I must fight you, Nova. The Condor rescued me from certain death. He showed me the way to live again. He gave me a home when I needed it most. I can’t turn my back on him now. I owe him too much to be treacherous !”

“I can’t let you have all that power, Condor. No man should be that impervious. Especially not you !”

“He’s in my power. I feel his energy flooding through me. He’s weakening… falling ! But I dare not keep this up any longer or I’ll kill him !”

“So he lies there helpless because of what I did to him. These hands… these cursed hands hold in them power beyond life and death. And… because I’m too weak to fight the Condor, I have no choice in how I use them. How long will this madness continue ? How long will it be before I become a killer ?”

“My world, Xandar, faces destruction by the Skrulls ! Thus, I must remain here to help my people.”

Drawbacks:
Power Loss (carbon monoxyde, such as found in fire extinguishers, will smother the energy he has stored if he’s exposed to it), Power Loss (attempting to drain a cyborg Space-Knight [such as Rom] reverses the process, draining all his stored energy).

Powerhouse can drain the energy out of targets, whether the electricity powering machines, super powers, blasts of energy (even those not directed at him), or even the life energy of people.

Powerhouse’s Power Reserve is initially 0 APs. The APs drained by Energy Absorption or Power Drain are added to this total (he doesn’t receive the drained Power). Attempting to drain a Space-Knight, or exposure to carbon monoxide, will drain this Power Reserve total.

The energy from this can be used to power his Energy Blast (to a maximum of 12 APs, with his PR total being reduced by the APs assigned every time it’s used), his Force Manipulation, or his physique (with the APs being split 2/1/1 among his Strength/Body/Damage Capacity). The energy dissipates fairly quickly, losing 1 AP from the total each turn he’s actively using his enhanced abilities.

The total of the absorbed energy may exceed his APs of Power Reserve, but if it does he immediately expels some in an involuntary Energy Blast at 16 APs, affecting everyone within 1 AP of him (and exhausting his energy total).

While amnesiac Powerhouse had the Unwanted Power Motivation, his Spirit was 02, his Mind was 03, he didn’t have the Vehicles skill, or his Force Manipulation power, his Energy Blast only worked when he suffered an overload, and his Energy Absorption didn’t have the range bonus. He also had the Uncertainty Drawback, and only 25 Hero Points. 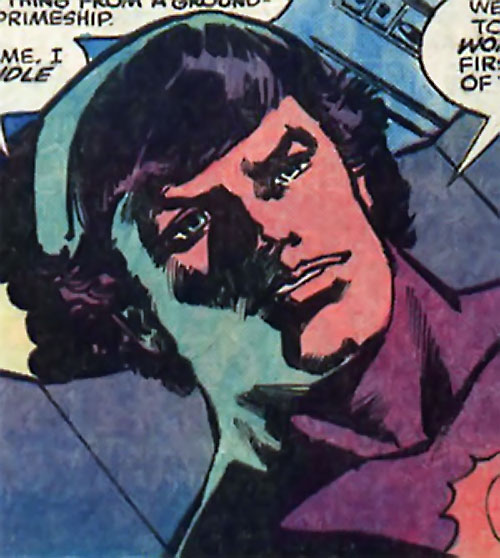 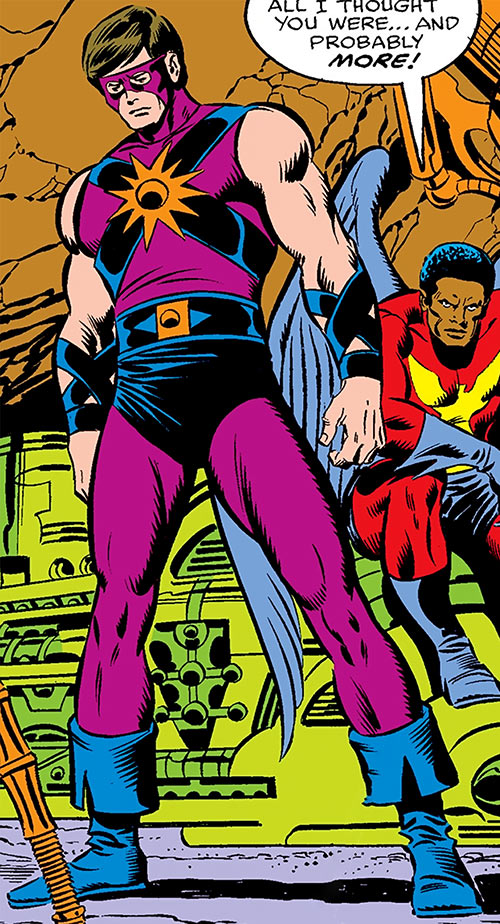